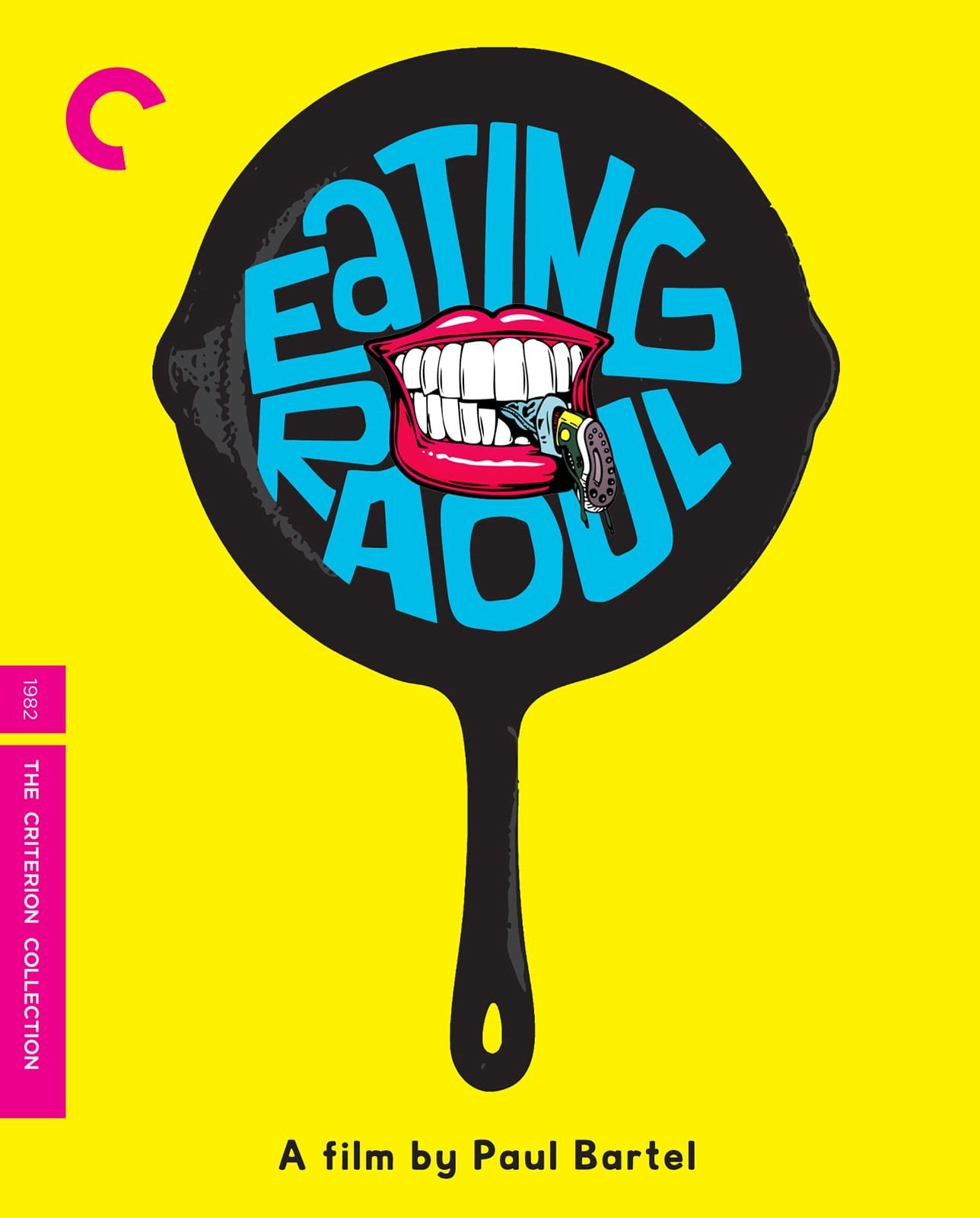 Paul Bartel’s Eating Raoul is slap-happy drunk on the potency of its skewed but internally consistent logic. A delirious rejoinder to the post-sexual revolution counter-culture wars, the film crosses the let’s-get-down-to-social-brass-tacks satire of Bob & Carol & Ted & Alice, which was respectfully vindictive of Los Angeles’s middle-class hedonism, with the straight-faced über-misanthropy of Kind Hearts and Coronets. The deadpan result, a story about a goofily chaste couple who murder and rob unsuspecting swingers in order to build up a nest egg, views all of Southern California’s stock stereotypes as exploitative misfits who deserve whatever hell they get. The off-color nature of the premise, wherein human flesh is turned nightly into dog food for wads of cash, and the broadly drawn racial depictions have the potential to clunk offensively. The film’s exuberantly egalitarian hate, however, represents a strange kind of open-mindedness. Ultimately, each character is defined not by their milieu, but by their ruthlessness, while we in the audience root for the Darwinian cynicism to keep escalating past every scabrous threshold imaginable.

By virtue of their cartoon opportunism, the characters are united in principle yet interpersonally estranged from one another. The movie’s blackout vignettes form a kind of battle royale for social advantage where everything, including the putatively “free” sex, is a power struggle. In one scene, a convenience store owner pauses from berating an employee to confront a gun-toting thief with an even larger firearm; the Hispanic locksmith-thug Raoul (Robert Beltran) steals cars and seduces white women with marijuana, while his only Achilles’ heel is a skittishness toward STDs; a male bank clerk (Buck Henry) who figures prominently in the third act will approve your loan only after he makes a deposit of his own in your corporeal account.

Even the homicidal married couple at the center, Paul and Mary Bland (Bartel and Warhol veteran Mary Woronov), is morally stunted. They express disgust toward the rampant horniness in their environment, caring only for fine wines (the former sleeps with a pillow in the shape of a Beaujolais bottle) and their plans to open a restaurant in sunny Valencia, California. And yet after they lure johns to their apartment with promises of fetishes fulfilled and pummel the poor suckers to death, they experience a glowing exhaustion that could be described as post-coital. Eroticism in Bartel’s topsy-turvy L.A. is less about bodily attraction than about aligning one’s environment with one’s ideals, and the satisfaction of having exerted such control.

Allegorically speaking, the Blands prefigure the emergence of AIDS, which was only being perfunctorily tracked in 1981; like the disease, they unscrupulously infiltrate their city’s sexually permissive underground and exploit its denizens’ base instincts and lack of foresight. It’s hard to take this viral prognostication too seriously given the sheer illustriousness of the killings, but this prescience provides a genuine fear of the human corpus to the film’s comedy, one that’s anything but flippant. A sequence toward the end, wherein Paul hurls an electric lamp at a hot tub stuffed with naked adults ready to mindlessly orgy, is a giddy set piece of anti-prurient brilliance. As much as Paul Mazursky’s earlier sex-minded film adored the shapely faces and unclothed chests of its cast to show us how seductive the concept of free love could be, Bartel’s camera is simply repulsed by flesh. The body, again and again, becomes just another heap of shit to stuff into a black garbage bag, while the garments used to obscure the skin are ostentatious and striking. (Costumes range from Hawaiian shirts to bright orange pajamas to fetishistic Nazi uniforms.)

The splendiferous wardrobes and mod set pieces (Paul and Mary’s apartment is decked out like a Westwood vintage store), in fact, make Eating Raoul a “black” comedy in theory only. The term “gallows humor” is slightly more accurate, if only because a hippie played by Ed Begley Jr. is asphyxiated with his own neck beads, but what both of those epithets miss is the true target of Bartel’s mordant wit. Though the film is full of death, it doesn’t revel in it; even the advertised cannibalism is a mere coda. The movie’s true joke is on the petty struggles for power and pleasure in which “mature” adults engage constantly, and despite all the murder in his story, Bartel doesn’t, finally, exaggerate our potential for carnage all that much.

“Watching [Eating Raoul],” Pauline Kael wrote in 1982, “I felt as if I were experiencing sensory deprivation.” She might have changed her mind if she’d lived to see this 1080p transfer, which sports bursts of light so gaudy and attention-hogging that one feels the need to avert his eyes on occasion. Criterion’s telecine team keeps designer Robert Schulenberg’s DayGlo pineapple-and-peach aesthetic at a vigorous boil throughout to compensate for the otherwise phlegmatic tone; the top-notch restoration process has rendered a landscape of aggressive color, with each hue emitting an aura of pride while resisting the urge to bleed across the screen. The result is a disc that smarts of clarity, a kind of celebratory suicide-by-art-direction. The sound, meanwhile, despite being a mono mix, is crisp and intelligible. This stellar treatment makes one wish that Criterion would take a pass at early Almodóvar.

Criterion’s supplements provide “Everything you always wanted to know about Eating Raoul but were too disgusted to ask.” Most deserving of rapturous appreciation is the inclusion of two Paul Bartel shorts from the early ‘60s, the prescient “Secret Cinema” and the hilarious bauble “Naughty Nurse.” The films’ 16mm sources have been cleansed to the point that they need not be watched begrudgingly for “historical” significance; despite the cheap-o, R. Crumb-like dialogue and a few anachronistic references, their antisocial sense of humor remains ripe. There are also two featurettes about the making of the film, one made in 2012 and the other an archival piece; a loving portrait of the late Bartel emerges throughout the interviews, one suggesting that he wasn’t so different from his character in the film. (Your mileage may vary on other insights, which include Robert Beltran’s rude awakening to Hollywood’s racism in his post-Eating Raoul career.) The disc rounds out with a mostly silly gag reel and an intermittently fascinating audio commentary with the film’s producer, editor, and designer. Once again, this content is best when it focuses on Bartel’s offbeat directorial style and droll personality. His colleagues, for example, describe how he balked at the idea of doing “research” on swinger lifestyles in order to make his film more accurate. (Everyone takes a pass at imitating his throaty speech too.) The Blu-ray package comes with a cornily designed “menu” booklet featuring an in-depth look at the film’s makers and milieu by David Ehrenstein.

Criterion’s pass at “Canonizing Raoul” makes me want to start lobbying for the inclusion of Bartel’s farce in 2022’s Sight & Sound poll.