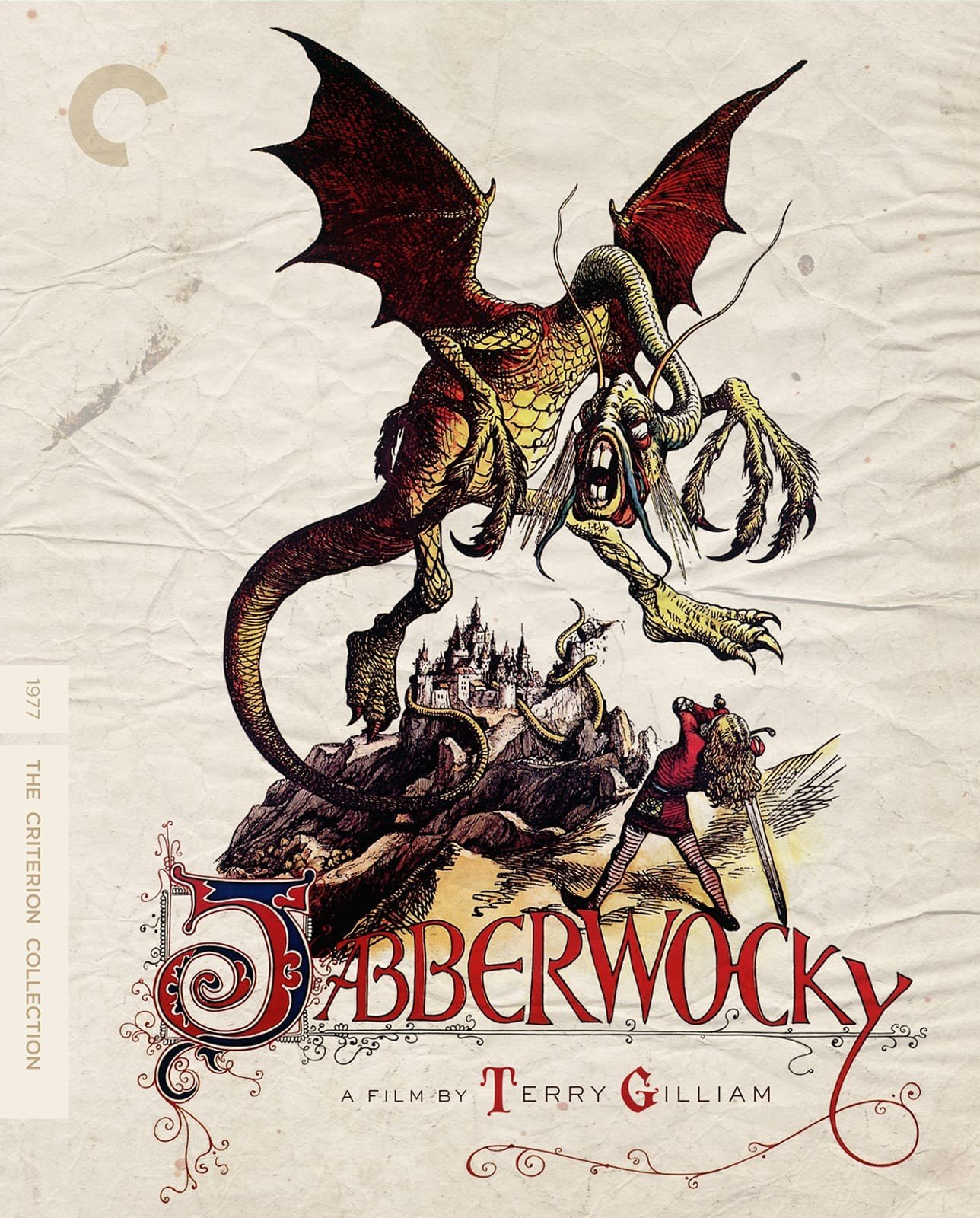 Terry Gilliam’s 1977 film Jabberwocky stands as an ideal stylistic and thematic bellwether of the filmmaker’s later work, as it abounds in Monty Python-honed sight gags and evinces a painterly visual scheme that betrays exhaustively researched attention to historical detail. Much of the film’s humor stems from the studied incongruity between its broadly cartoonish and almost verité depictions of medieval life. Beneath the buffoonery, the trenchant (and still pertinent) script by Gilliam and Charles Alverson scores satirical points off the benefits of fearmongering, the insolence of political office, and the ascendency of assembly-line mass production over smaller-scale economies based on a sense of craftsmanship.

If that all sounds rather weighty, it certainly doesn’t come across that way in the viewing. Gilliam mostly strikes an assured balance between mess and message, even if a few of the gags do tend to drag on a bit. Jabberwocky opens cold with an attack on a poacher (Terry Jones) by the unseen titular creature; the parody of Jaws is unmistakable, down to the throbbing theme music. In a nifty little in-joke with a surprisingly gory punchline, the scene promptly does away with Jones, as though Gilliam thereby meant to symbolically take full control over the proceedings after having shared directorial duties with Jones on Monty Python and the Holy Grail. The credits play over paintings by Bosch and Breughel, and Gilliam’s shot compositions often bring to life suitably surreal imagery from their works.

Young Dennis Cooper (Michael Palin) seems to care more about perfecting the art of the deal with cut-rate merchant Fishfinger (Warren Mitchell) than learning to respect wood from his barrel-making father (Paul Curran). Dennis is just the sort of put-upon naïf who recurs throughout Gilliam’s films, but his obsession with profit and maximizing efficiency lends his character a decidedly mercantile streak that later, more poetically “pure” Gilliam mock-heroes will lack. Then again, in this film, every character seems to be operating under his or her own private delusional system.

Dennis’s picaresque sojourn from rural village to castle keep reveals a world riddled with corruption and frothing with fanaticism. Castles crumble in upon their royal inhabitants; the golden-haired princess (Deborah Fallender) who Dennis encounters proves positively besotted with fairy-tale fodder; and the knight who rides out to slay the monster bears the emblem of a red herring upon his helmet. What’s more, the powers that be prefer to keep it that way: Prominent merchants stand to make a killing off a populace packed like canned sardines behind castle walls, while the ecclesiastical hierarchy rave about record-breaking attendance in church. This bleakly Orwellian view of the sociopolitical landscape as an endemic state of siege is shared by later Gilliam films from Brazil to The Zero Theorem.

Dennis dreams (in properly petit-bourgeois fashion) about little else than winning the hand of the not-so-fair Griselda (Annette Badland), Fishfinger’s gluttonous plus-sized daughter. In one of the film’s more piquant sight gags, Dennis keeps her castoff, half-eaten, eventually rotten and tendril-sprouting potato close to his heart as a token of her alleged affection. But, as anyone familiar with his oeuvre knows, Gilliam has a somewhat perverse relationship with anything resembling a traditional happy ending.

In Jabberwocky’s final irony, Dennis ultimately attains his most cherished goal, only to have the happiest of storybook happy endings forcibly imposed on him. Gilliam shows the clearly mismatched newlyweds riding off into a Loony Tunes-style animated sunset, and you almost expect the big foot from Monty Python’s Flying Circus intro to stomp down on them. It would’ve provided a fittingly mordant echo to the film’s opening scene, in which the oblivious poacher squashes an exquisite butterfly underfoot. The arbitrariness of fate that Dennis experiences seems to point the way toward the far more downbeat destiny of Brazil’s Sam Lowery. Gilliam would likely agree with the Bard’s insectile assessment of the human condition: “As flies to wanton boys are we to the gods, they kill us for their sport.”

The Criterion Collection presents a new 4K restoration of Jabberwocky from the BFI and Martin Scorsese’s Film Foundation. The image here is an unsurprisingly vast improvement over the one presented on Criterion’s 2001 DVD of the film: grain levels are thick and properly cinematic; blacks register strongly; and colors are vivid and densely saturated. The Master Audio surround remix supplies some vigorous track separation for the often cartoonish sound effects, and foregrounds nicely the library music from De Wolfe Music that lifts from the likes of Mussorgsky and Berlioz.

Carried over from the earlier DVD, Terry Gilliam and Michael Palin’s commentary track is a thoroughly enjoyable listen, overstuffed with amusing production anecdotes and wryly self-deprecating banter, while also tipping the hat to key visual and thematic inspirations. The proceedings are dated only by a passing reference to then-President George W. Bush and several quips about the DVD format. A new making-of documentary covers some of the same ground, but adds some welcome input from producer Sandy Lieberson and actress Annette Badland. Creature designer Valerie Charlton discusses the rocky road stretching from Tenniel’s famous drawing of the Jabberwocky to the finished monster. Charlton also shows off rare behind-the-scenes photos as well as some of her other Python-related artwork.

In an archival audio interview, DP Terry Bedford talks about collaborating with Gilliam on Monty Python and the Holy Grail and this film, straitened circumstances due to low budgets, and how the Pythons never got the respect they deserved from the mainstream British film industry. Among the ephemera, there’s a short sketch-to-screen comparison (also culled from the DVD), the adumbrated original U.K. titles, and a cheekily emphatic rendition of Lewis Carroll’s poem from Palin and Annette Badland. The foldout booklet contains Scott Tobias’s essay on Gilliam, Carroll, and the fairy-tale mode.

Terry Gilliam’s hysterical historical farrago gets a ravishing 4K restoration (and a handful of new extras) from Criterion.