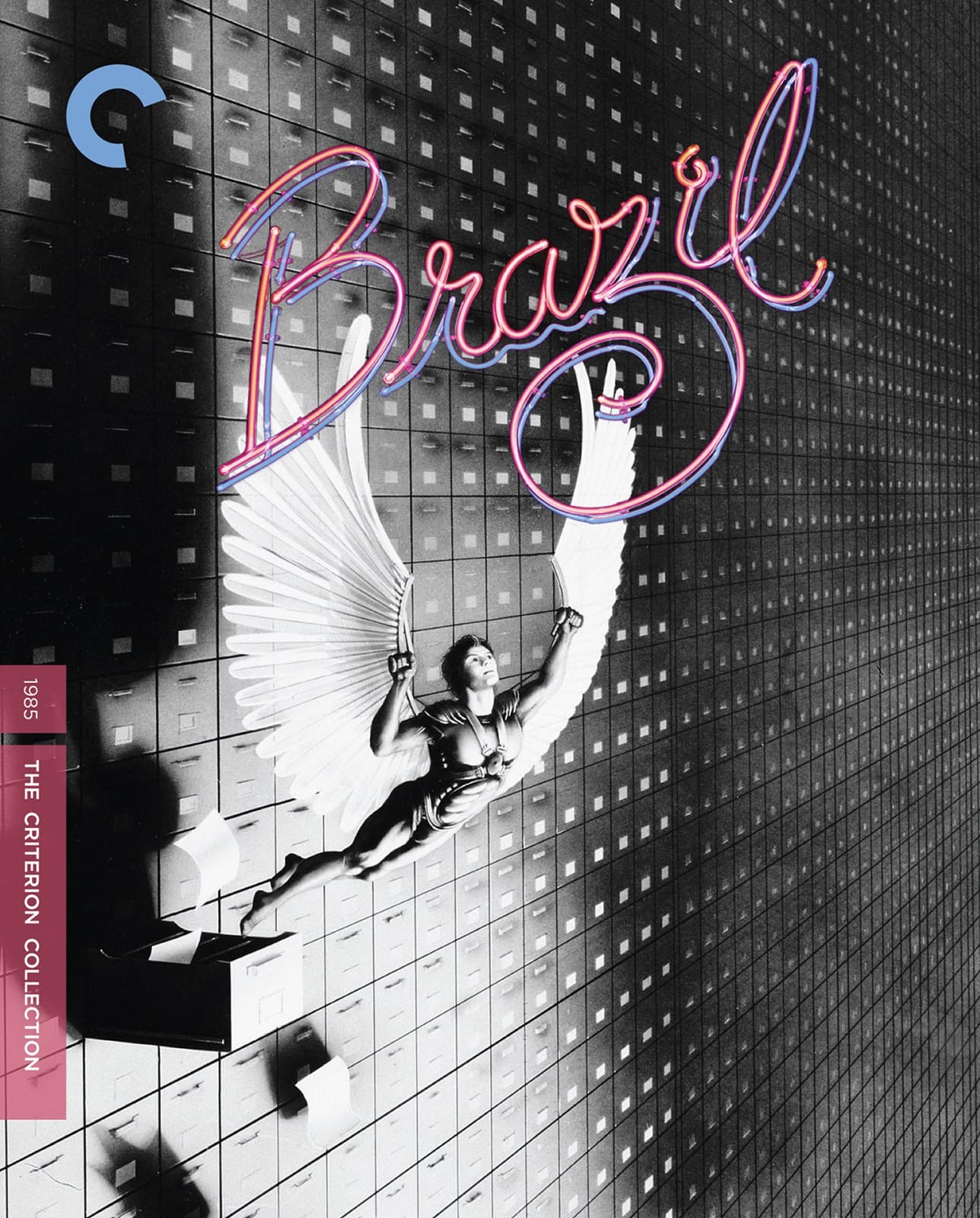 Through its wildly comic, furiously creative, and intensely moving façade, Terry Gilliam’s Brazil ponders a future made to sustain a draconian past molded by inequality. In this dystopia, the rich, having long knelt at the altar of radical capitalistic tyranny, spend their days having their flesh stretched, sliced, and injected with ultraviolet potions, while the working class types, files, signs, and stamps its way through pointless paperwork. Overrun by communicative ducts, coated wires, cement and metals, and magnified, miniature computer screens, the future conjured up by Gilliam averts the familiar prophecy of an anaesthetized, plastic world overrun by rampantly advancing technology. Indeed, men, who see advancing technology as an affront to their fiscal station and take the pecuniary gain of the morbid, perverse 1% as their modus operandi, unmistakably run the future of Gilliam’s film. New technology is expensive; paper is cheap.

Sam Lowry (Jonathan Pryce) is in the thick of it, one of the litter of suited drones who’s also tasked with performing the day-to-day needs of his sniveling, inept boss (Ian Holm). The son of a grotesquely materialistic mother (Katherine Helmond), Sam is given to flights of fantasy wherein he’s a winged knight, soaring through the sky and saving an angelic beauty (Kim Greist) from a dour, cold industrial zone, to distract himself from the unwarranted nepotism his mommy dearest insists on enacting. Gilliam, working from a script he co-wrote with Tom Stoppard and Charles McKeown, presents Sam as tellingly unambitious and apolitical but lovesick, feverishly seeing the beauty from his fantasies in the open spaces of the cityscape’s massive, oppressive stone buildings.

In reality, the beauty is Jill, a truck-driving courier who, in a chilling, darkly comic early sequence, witnesses her neighbor being violently taken away by the Ministry of Information (M.O.I.), where Sam is up for a promotion to the highly secretive Information Retrieval sector. The film brilliantly uses the ineptitude of the M.O.I. in all their dealings (notable exceptions: torture and killing) as the inciting incidents that lead not only to Sam’s eventual rebellion against the system, but also the continued bombings perpetrated by Archibald Tuttle, perfectly played by Robert De Niro. It is, in fact, a clerical error, via a bored drone’s obsessive need to kill a pesky fly, which sends the M.O.I.’s militaristic security force after Jill’s neighbor, Mr. Buttle, instead of Tuttle.

Tar-black in its comic tone, Brazil nevertheless rouses a wide range of robust emotions through its stunningly coherent, madly inventive narrative. Sam and Jill’s romance is hard-won, delicate, and strangely sweet, their culminating roll in the hay radiating pure joy, but the filmmakers also tap potently into the ruthless irresponsibility that a privatized bureaucracy engenders. After Mr. Buttle is carelessly executed by M.O.I., Sam pays a visit to his widow (Sheila Reid) to pass on a check, only to be met with a potent vision of violent grief and loss that wouldn’t be completely out of place in a depiction of the Irish troubles. If Gilliam ultimately prefers the grotesque in his imagery, his predilections never limit the tremendous emotional experience that he imparts in Brazil.

Along with Sam, Jill, and Tuttle, Buttle’s widow cuts to the humanistic heart of Gilliam’s masterpiece (“We’re all in it together” is a repeated phrase), but there’s no mistaking the imprint of a Monty Python member. Physical and visual gags run through the film like those infernal ducts, and Gilliam makes great use of a brilliant supporting cast, from Bob Hoskins’s aggressive Central Services worker to Jim Broadbent’s pompously kiss-ass plastic surgeon to Michael Palin’s mild-mannered torturer-drone. The endless visual power of the film in all its Reed-Langian glory is matched by Gilliam’s unerring love for performers of untamed physical and verbal talents.

As Sam and Jill’s rebellion is cut short, it’s Palin’s torturer who brings upon Sam’s amazingly sad conclusion, and it’s here where Gilliam’s fanatical movie love comes to bare, as Sam is left to live inside a cinematic fantasia inside his mind as his body is left motionless. Besides the obvious Orwellian elements, the filmic pedigree of Brazil is richly layered, potently evoking The Third Man, the Marx brothers, Battleship Potemkin, Star Wars, Kurosawa, Casablanca, 8 ½, Modern Times, and, most vibrantly, Metropolis, among others. Such tremendous artists and films depicted both the harshness and necessity of reality, as well as the enveloping power and ultimate intangibility of imagination and expression, and Brazil is a glorious ode to that essential dichotomy. Ironically anticipating his own rebellious fight against Universal, the heads of which wanted to relegate the film to a simple, 94-minute fantasy, Gilliam presents an utterly singular vision of a world where the cold, exacting actions of an all-powerful plutocracy are at once fighting against and employing fantasy, where the individual can be eaten alive and erased by pieces of paper.

Having already released two DVD packages of Terry Gilliam’s masterpiece, Criterion expectedly puts all of its considerable technical care into the 1080p/AVC-encoded transfer. The more colorful scenes, most of which revolve around Sam’s mother and her Fellini-aping wardrobe, are boldly presented, while the funereal detail of the Information Retrieval sector is given newfound clarity. Textures, from Sam’s suits to the bright-red Central Services uniforms, are stunningly captured. And thankfully, seeing as the film features plenty of shadowy expressionism, black levels are perfectly inky. The triumphant soundtrack is also beautifully presented throughout, immediately noticeable as a huge advancement from the DVD transfer from the first lines of the titular Tropicalia number. Dialogue is crisp and clear in the front, while Michael Kamen’s fantastic score and a sonic wonderland of sound effects are mixed wonderfully in the back.

There’s nothing here that wasn’t also on Criterion’s DVD packages of Brazil, but there isn’t much else you could ask for really. Everything you ever wanted to know about Brazil but were unable to Google is afforded in the typically cherry extras section, beginning with Gilliam’s incredibly involving commentary that covers everything from the intricate, singular design of the film to the film’s surplus of fascinating themes. It’s one of the best commentaries Criterion has ever recorded. Next, two docs add to Gilliam’s in-depth discussion of Brazil: “The Battle of Brazil,” a fantastic hour-long account of the film’s troublesome U.S. release, and Rob Hedden’s “What Is Brazil?,” an entertaining 30-minute look at the film’s production. The short docs that make up “The Production Notebook” cover almost everything else about the film you would want to know, from the costume design to Michael Kamen’s score to the origins of the screenplay. They have also included the much lesser studio cut of the film, the infamous “Love Conquers All” version, with optional commentary by David Morgan, a trailer, and a booklet featuring an essay by David Sterritt. It would be nice to see some discussion of the film’s influence, but this is nevertheless an impressively expansive look at the background of one of the key films of the 1980s.