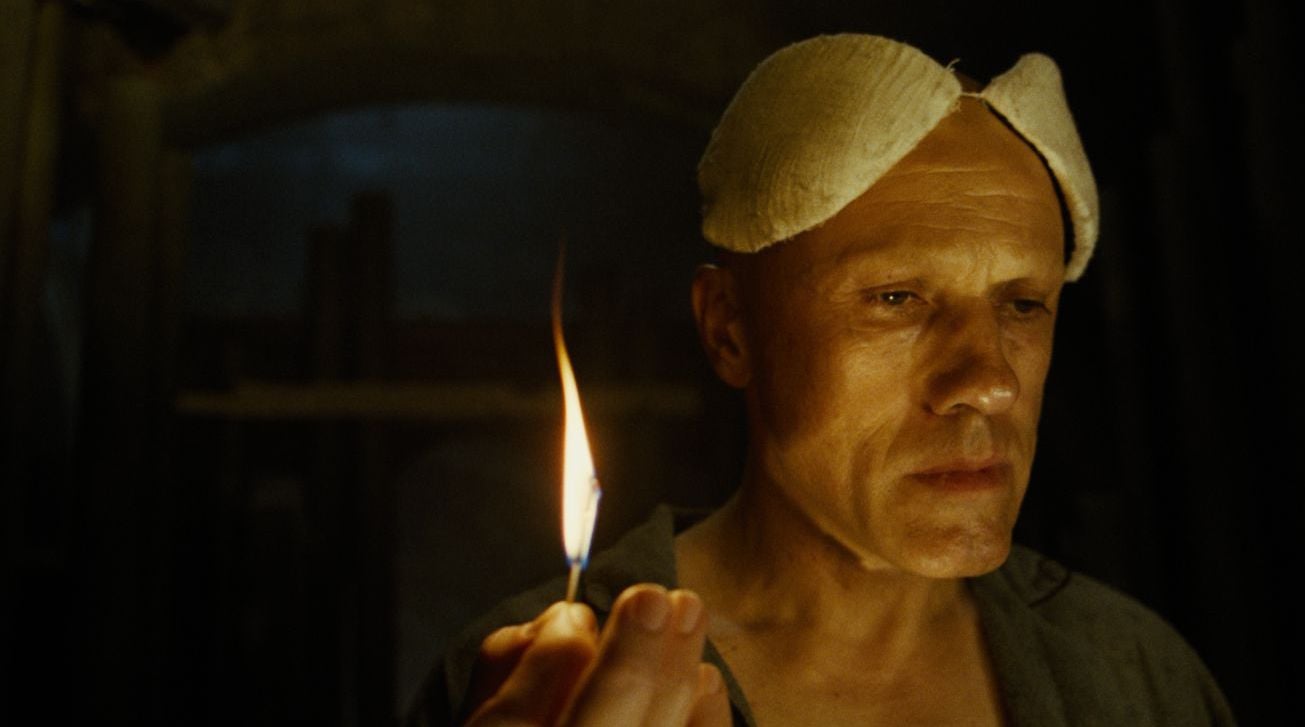 The Zero Theorem is another film about a male schnook who wonders what it’s all about. “It,” of course, being life, which Qohen Leth (Christoph Waltz) mostly spends enclosed in his cavernous home while hacking out data for a faceless corporation that speaks of valuing its workers while hanging amusingly conspicuous surveillance cameras above their desks. Qohen, pronounced Cohen, is a “dreamer,” which means, in the context of present-day consumerist society, that he’s sold his soul to the powers that be with just enough imagination left over so as to properly hate himself for brokering the transaction. As the film opens, Qohen is attempting to convince his employers to allow him to work from home, insisting that he’s dying and, well, it would be more efficient to cut the travel time and expense anyway. Qohen’s superiors, played by David Thewlis and Matt Damon, smugly screw around with him for a while, primarily just for the hell of it, but eventually relent, allowing Qohen to set up a domestic work station while assigning him a priority project called the Zero Theorem.

That’s really all the plot there is. The Zero Theorem matters so little to the film that it’s less a MacGuffin than a blatantly flimsy symbol of Qohen’s self-pitying search for the meaning of life from the vantage point of his computer-fostered cocoon. Technologically enabled myopia is the film’s real concern, as the imagery frequently parodies the gadgets that the 21st-century shopper must constantly festoon themselves with so as to feel comfortable in their everyday surroundings. A kid insists that Qohen leave his house at one point, only to immediately shove a bud into the older man’s ear while shielding his eyes with sunglasses, which block, not just the sun, but the ads that hound people down the streets, as well as the explosion of bright Technicolor graffiti that seems to have landed on every cluttered sidewalk. This stylization occasionally underlines a truth: You’re aware that really being outside, at least in a contemporary city, is a dying concept in a world in which people can work from their phones and chat through devices the sizes of pocket watches.

Conceptually, though, The Zero Theorem is largely unsurprising: It’s another modern dystopia parable, which rehashes the same few superficial humanist/socialist platitudes over and over again, with such reliability as to nurture our complacency as effectively and insidiously as a Capital One ad. For the price of a movie ticket, you’re told that you’re wounded, special, and enslaved by your society, and so you’re thusly provided your token indulgence of meaningless egocentric “rebellion” for the week, in between the company kickball game and margarita Friday. The good news is that director Terry Gilliam sees this material for the derivative pandering nonsense that it is, and deemphasizes it accordingly. The bad news is that Gilliam’s contemptuous flippancy leaves you with another of his pointless and indulgent fashion parades, in which he wears his sense of invention with an air of self-congratulatory entitlement that sucks all the life right out of the room.

Gilliam’s biggest howler announces itself up front: His aesthetic doesn’t make any sense for a film that’s presumably about our contemporary obsession with doodads, and how corporations have exploited that obsession to subtly annihilate any sense of untethered thought. A film that’s even remotely in tune with this theme should probably be sleek, sexy, maybe even deliberately impersonal (see Minority Report, which literally predicted the future), so as to capture the corporate allure that’s dangled so brilliantly in front of our eyes. Gilliam, per his wont, makes a fetish of archaic clutter, stuffing the frame with Roman architecture, Victorian furniture, fluorescent colors, spiral stairwells, statues, ducts, pulleys, and who knows what else. And that’s just the sets. The people are even more pointlessly garish, clad in white fur coats and S&M-tinged Satan jumpsuits and leopard prints, and, in one memorably absurd case, a silver-dusted pizza-delivery outfit that suggests a ski-patrol get-up as reconceived for a Hooters girl.

Gilliam shoves all of this down our throats with his customary bug-eyed, fish-bowled lensing, which helps to foster the unappealing illusion that the actors are constantly screaming directly in our faces. He appears to be straining for a sort of companion piece to Brazil, which also followed a schmuck who was trapped in a hellish corporate wasteland, but that film’s aesthetic reflected the file-and-typewriter culture that it was lampooning. The times have changed. In fairness, the literal physical clutter is probably intended to reflect the figurative mental clutter that our new, nearly invisible machines ironically leave in their wake, but that concept has no real urgency here. Gilliam has imposed a mix tape of his greatest hits, whose greatness was debatable to begin with, on a whiff of a story that might’ve flourished under the maxim “less is more.” As it is, more is nothing, which is to say that Gilliam inadvertently proves his own Zero Theorem.