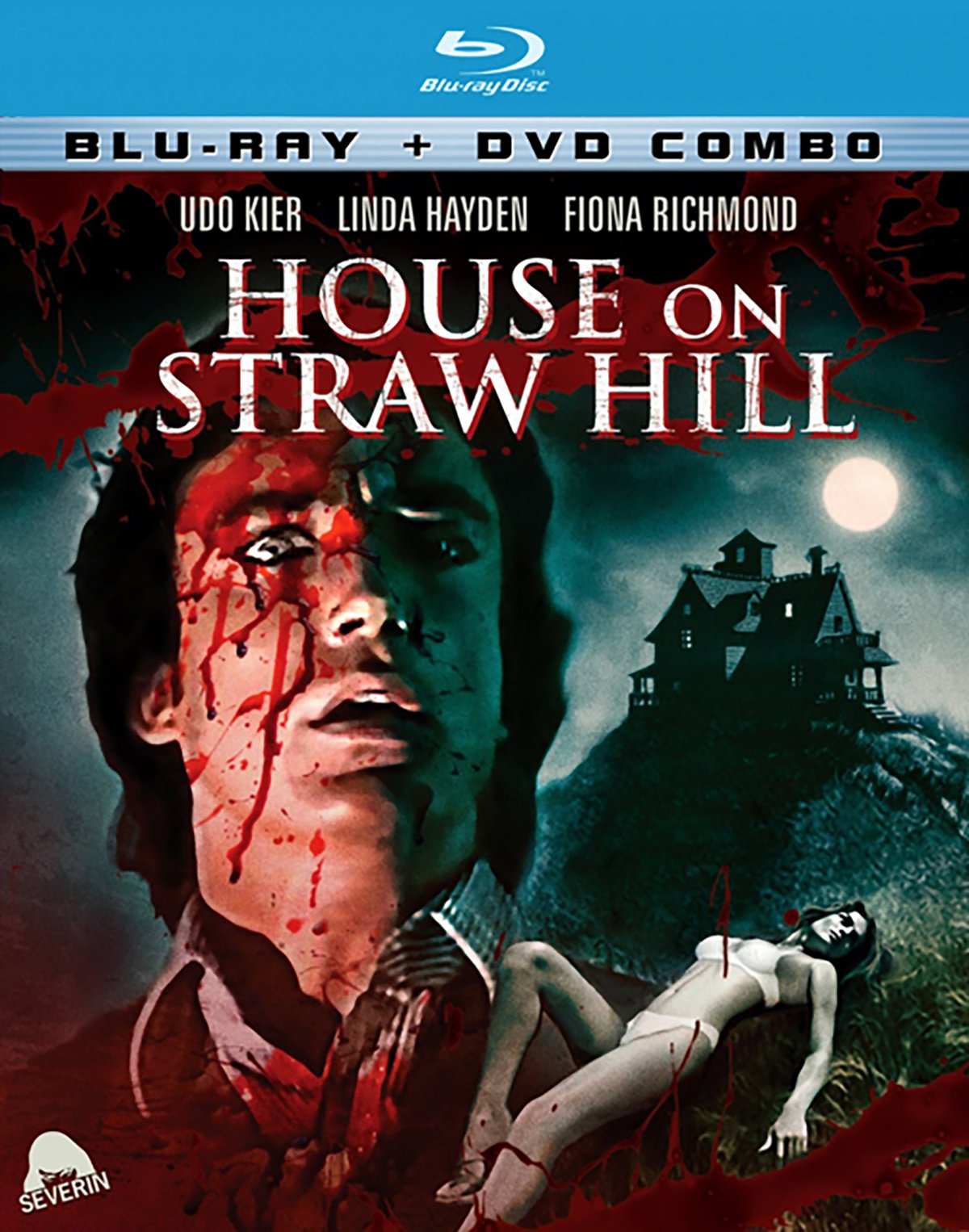 Writer-director James Kenelm Clarke’s House on Straw Hill bears the dubious distinction of being the only domestically produced film banned outright by Britain’s Video Recordings Act at the height of the moral panic surrounding what came to be known as “video nasties.” At the time, the ostensible reason was the film’s discomforting association of bloody violence and fairly uninhibited sexuality. The film still packs a tawdry wallop, for that matter, even if its supposedly graphic content is bound to strike viewers as comparatively tame nowadays. House on Straw Hill owes more than a passing nod to Hitchcock’s Psycho (indeed, there’s even the requisite murder set piece inside a shower), but Clarke cheekily ramps up the exploitation elements, with the result that the film could have easily served as a rough template for Italian giallo films like Lamberto Bava’s A Blade in the Dark.

In a bid to beat the sophomore slump, novelist Paul Martin (Udo Kier) rents a remote Essex villa (the eponymous estate) where he can work on the eagerly anticipated follow-up to his bestselling debut novel Deadly Silence. In a murkily shot opening sequence, we see Paul and lady friend Suzanne (celebrated Brit cheesecake Fiona Richmond) sipping champagne and watching his performance in a televised interview. This is presumably meant to establish Paul’s bona fides as a renowned writer and all-around bon vivant, but all he does is blather on about “the catharsis of lust” and other ludicrous bon mots. (Paul’s line of drivel subtly sows the seeds of the film’s third-act curveball.) Things aren’t exactly looking up later that night when Paul has a total freak-out during a bout of lovemaking: Wide-angled frames of Suzanne captured in the throes of passion alternate with a hallucinatory flurry of shots portending bloodshed and even suicide.

When Paul decides to get down to the business at hand, he sends for typist Linda (Linda Hayden). Picking her up at the local train station, Paul has to fend off the unwanted advances of two brawny lads with his unexpected prowess in karate. (If you’ve ever wanted to see Udo Kier go full-on Bruce Lee, here’s your chance.) After Linda takes down some of Paul’s delightfully overcooked dictation, she scampers off to indulge in the first of three masturbatory interludes. Lest you suppose House on Straw Hill to be entirely devoid of its own vein of sly humor, witness the following exchange. Upon her return, Paul sulks, “You were a long time.” “In coming?” Linda purrs, taking a nibble out of a biscuit. During lunch, Paul prattles on about his scrupulously regimented daily routine, his firm belief in “tranquility derived from order,” before getting blotto and hallucinating again, this time that Linda wants to slice him open with a butcher knife. Which, as it turns out, isn’t far from the truth. As to her motivation, let’s just say it’s been heavily foreshadowed.

The sexual content in House on Straw Hill is indeed plentiful, but it does serve a valid point: As in any dramatic work, action reveals character. Here the sexual interactions between the characters disclose a common bedrock of psychopathology. Paul sees Suzanne as a kind of commodity fetish. “You’re here for my pleasure!” he informs her before forcing her to fellate him. He also insists on slapping on latex gloves before having sex with her; later, when Linda has turned exterminating angel on him, she puts on the gloves, establishing the substitutive equivalence for her between sex and violence. To wit: Linda seduces Suzanne with all the steely premeditation with which she cuts the brake line on Paul’s vintage Morris Minor. During the notorious rape at gunpoint scene, Linda strokes the shotgun barrel in a lascivious display intended to distract and (literally) disarm, before seizing the weapon and turning it on her assailants.

It’s easy to see why this scene in particular made censors squirm in their seats. Ultimately, the scene invests the victim with an agency lacking in something like Sam Peckinpah’s Straw Dogs, a film strangely similar in both name and tone. Even if the latter emerges as the superior film, endowed with a sinewy rigor and flashes of ambiguity that the former’s desperately cobbled-together psych-outs can only hope to emulate, House on Straw Hill boasts a deftly nuanced performance from Linda Hayden, as well as the compulsively watchable Kier, who effortlessly alternates between urbanely unctuous and utterly unhinged like nobody’s business.

Severin provides an explanatory placard before the film explaining that their Blu-ray transfer was mastered from three equally limited sources: a heavily water-damaged original negative and two well-worn 35mm exhibition prints. Sure enough, there are plenty of artifacts on hand: Blotches and vertical scratches mar nearly every scene, color tones fluctuate with an almost stroboscopic effect throughout much of the film, and the black crush evident in one low-lit indoor scene borders on the psychedelic. Nevertheless, the HD transfer does bring out certain details like the scintillating metallic scales on Fiona Richmond’s tony evening attire. Overall, it’s a watchable enough film, and some of the more brightly lit outdoor scenes even maintain their bucolic appeal. On the other hand, the lossless mono Master Audio track is actually pretty sturdy, mostly lacking in cracks, hisses, or pops. Dialogue is mostly discernible, thanks in no small measure to some judicious post-sync audio looping (both Udo Kier and Fiona Richmond were re-voiced), and Steve Gray’s ominous score comes across quite nicely.

The lively and often wryly amusing commentary track, moderated by journalist Jonathan Sothcott, features writer-director John Kenelm Clarke and producer Brian Smedley-Aston. Discussion topics include Clarke’s musical contribution to Vampyres, Smedley-Aston’s previous foray into unabashed sex and violence, the decision to build a film around one location (which belonged to Clarke’s family), Smedley-Aston’s role (literally and figuratively) in the production, and the evolution of the film from a fairly straightforward riff on Hitchcock to a psychological thriller dominated by “lots of lashings of sex,” as well as the casting of the lead actors.

“An Angel for Satan” is a career retrospective interview with actress Linda Hayden, who laughingly admits to often being recognized by “people who’ve been up at 3 a.m. watching my movies.” She looks back over her experiences on the set of Hammer’s Taste the Blood of Dracula and Madhouse. Hayden describes Vincent Price, her co-star in that film, as “a real windup merchant.” If a disproportionate amount of the interview is dedicated to Piers Haggard’s Blood on Satan’s Claw, that’s hardly surprising, since this bonus feature was in fact ported over from Anchor Bay’s U.K. release of that film. When it comes to House on Straw Hill, however, Hayden admits that it was “one I wish I hadn’t made”—but her allegations that certain unsavory “things were added” seem unfounded, given the absence of any dubious body doubling, let alone hardcore inserts. More than likely, she objected to a shift in the film’s publicity away from herself and onto Richmond, whom Hayden describes rather succinctly, if not exactly incorrectly, as “a lady who used her body a lot.” Co-star Kier, she allows, had “a filmable face.”

Included on a separate DVD (at least for the initial pressing) is David Gregory’s “Ban the Sadist Videos!,” an entertaining and exhaustive documentary about Britain’s “video nasty” censorship craze. This feature-length doc opens on the heyday of the home-video era in Britain, when that country boasted more VCRs per capita than any other nation in the world, then details the moral panic instilled by media watchdog pundits like Mary Whitehouse, subsequent police raids on video stores and retailers, and the handover of regulatory duties to the British Board of Film Censors. My favorite bit concerns a raid conducted on a distributor in order to seize copies of Sam Fuller’s The Big Red One, which some clueless officials apparently mistook for hardcore pornography.

Double-barreled exploitation fodder of the tawdriest vintage, House on Straw Hill gets the best Blu-ray transfer extant elements will allow, as well as a full clip of extras from Severin Films.

Swan Song Review: An Exhilarating and Moving Tribute to a Queer Trailblazer