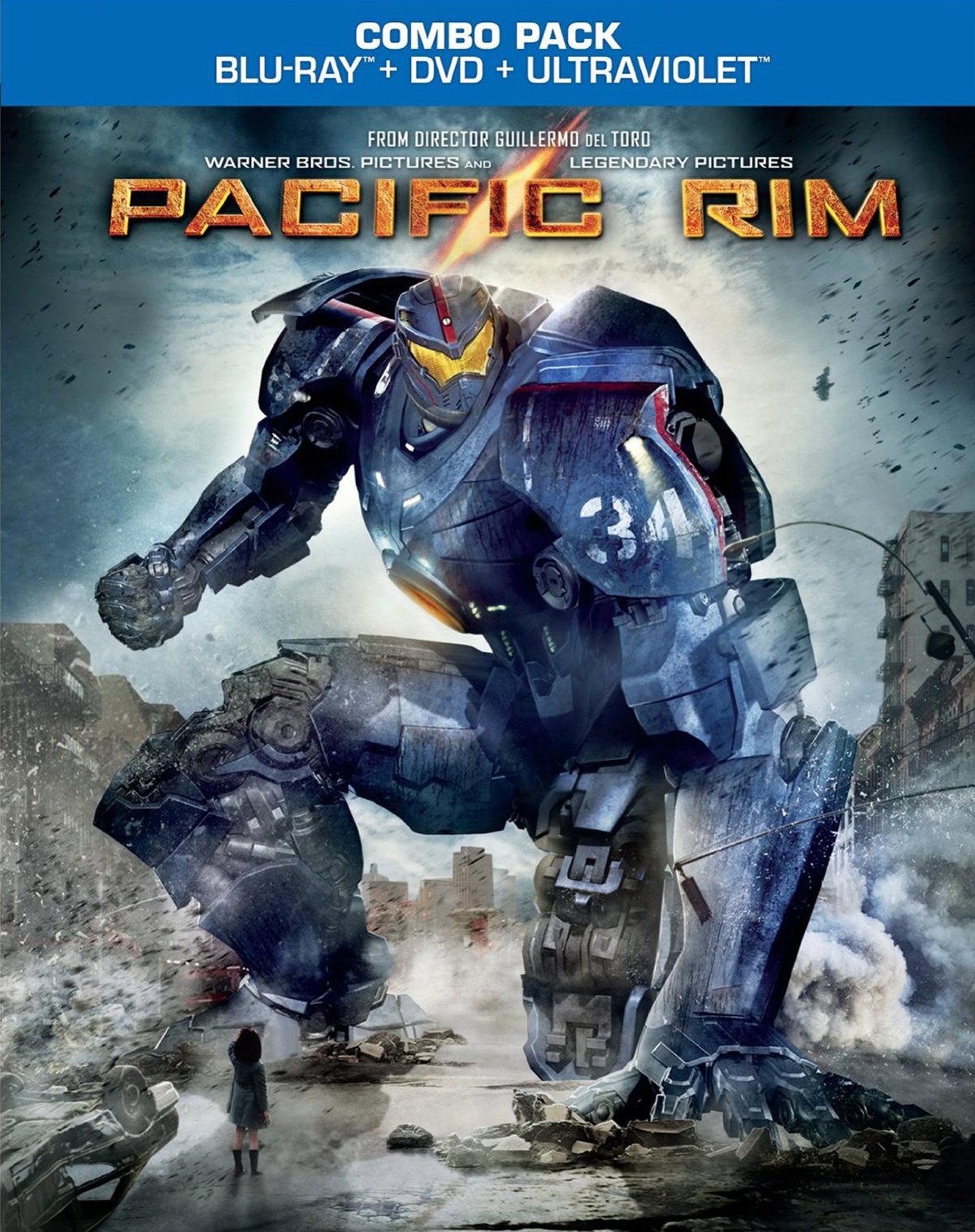 Guillermo del Toro’s career-long stress on the importance of cooperation and community in victory feels at once tightened and amplified in Pacific Rim, in which skyscraping robots known as jaegers, which are piloted by humans and powered by a digitized stream of memories known as the Drift, battle gigantic monsters known as kaiju for the fate of the world as we know it. In his Hellboy, the titular beast-savior isn’t a singular ass-kicking machine, but rather a leader of a multifaceted team, each member of which is essential to overcoming certain death. Here, our heroes, co-pilots Raleigh (Charlie Hunnam) and Mako (Rinko Kikuchi), are aided not only by Stacker Pentecost (Idris Elba), a pioneering jaeger pilot, and fellow pilots from Russia and China, but also a pair of scientists, played with wild comic energy by Charlie Day and Burn Gorman. This dynamic offers a far more believable and engaging dynamic than the lone-wolf mentality that often dominates modern actioners and sci-fi tales, and del Toro keeps all the narrative plates spinning with a master’s ease, aided by editors Peter Amundson and John Gilroy.

More than that, this assembling of talents echoes the process of making a big-budget movie, and there’s a sense of del Toro, behind the camera, fighting for the future of blockbusters, what could be considered his very livelihood; the film’s tagline—“Go Big or Go Extinct”—relays this sentiment. In the wake of Steven Spielberg and George Lucas’s recent comments about the future of big-screen movie-going, Pacific Rim has the unmistakable ring of a caterwaul of resistance in an age where the big screen is looking more and more miniscule in comparison to the massive advents of the small screen, whether in the form of Mad Men or Grand Theft Auto V. As such, the film’s admitted likeness to video-game structure is a little off-putting, following a somewhat predictable trajectory of escalating conflict; the final kaiju is literally next-level, as relayed by Pentecost’s right-hand man (Clifton Collins Jr.). Del Toro’s cast helps to subvert this irk: The kaiju aren’t nearly as bracingly fearsome as Elba, especially when he barks “we are canceling the apocalypse,” and Kikuchi smartly makes her character vulnerable without inviting bathos, never as noticeable as when Mako spars with Raleigh against Pentecost’s initial wishes.

Pacific Rim is a statement of endurance from a big-league survivor. The filmmaker ostensibly weaponizes all of his thematic and stylistic obsessions to create a bigger, better entertainment, one that echoes his professional disappointments of working with big studios on big movies; his eternally botched plans to adapt H.P. Lovecraft’s At the Mountains of Madness and Harvey Weinstein’s pigheaded dismantling of Mimic are only the most infamous incidents. And yet, Pacific Rim is anything but particularly grim in tone, luxuriating in each of its thrilling, exquisitely paced action sequences and laced with notes of potent humor and sincere kinship. (That being said, Ron Perlman’s welcome appearance as Hannibal Chau, a black-market dealer of kaiju entrails, would be worth the ticket price on its own.) The danger of piloting a jaeger is getting caught in the Drift, locking onto a single memory and the strong emotions it evokes. Del Toro could have got caught in his own Drift, corroded by resentment born of his disastrous past relationships with major studios, and Pacific Rim serves as a rebuke to that fear, and a rollicking reminder that, every now and again, size does matter.

The film’s often violescent color scheme radiates off the screen beautifully, from the neon-flecked wreckage of Hong Kong to Hannibal’s hidden laboratory and marketplace, decked out in crimson and gold. The clarity of the picture gives an entirely new sense of detail and texture to each scene, underlining Guillermo del Toro’s sense of visual nuance. Black levels are pitch-perfect, and really shine during the monumental fight scenes. There isn’t a single thing that isn’t exceptional about the visuals, and the audio is hardly different. The occasionally risible dialogue is clean and crisp out front, while a tonnage of auditory effects balances nicely with Ramin Djawadi’s propulsive, rock-infused score. For those who like to give their home-video systems a workout, this package will prove an essential addition to your library.

As always, del Toro provides an engaging and insightful commentary of his own work, going over every facet of the film’s production. He begins with discussing the conception and the writing of the script, and then goes on through design, casting, shooting, and visual effects. His intellect is formidable, but what always makes a del Toro commentary unique is the humor he exudes. This is less the case with the dozen or so “Focus Points” featurettes, but they nevertheless offer an entertaining and interesting visual run-through of many of the elements of the production that del Toro discusses. On top of this, there are another two featurettes on the footage used for the Drift to del Toro’s work with the FX crew. The “Director’s Notebook” feature allows you to access sketches and features, and adds on another six worthwhile featurettes. The “Shatterdome” feature offers a barrage of design art, and the blooper reel is, well, a hoot. Deleted scenes are also included, along with a DVD copy of the film. Short of being on set, you’ll know as much about Pacific Rim as is possible to know.

Guillermo del Toro’s hulking sci-fi actioner strides onto Blu-ray with an astonishing, muscular A/V transfer, armed to the teeth with an arsenal’s worth of fascinating extras from Warner Home Video.