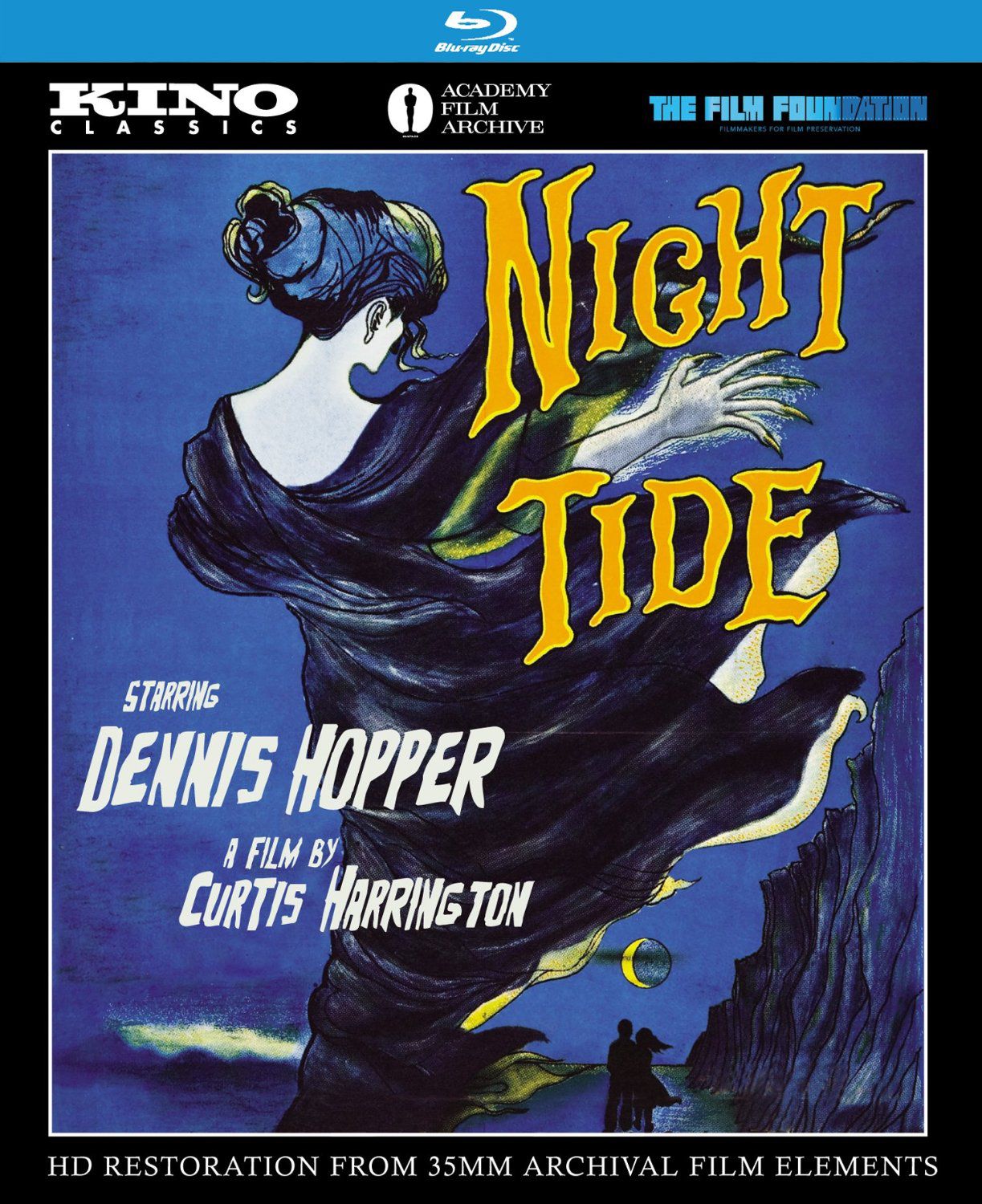 Few films capture the mood of dashed sensual yearning that often greets summer nostalgia with the vivid acuity that distinguishes Night Tide. The film is conventional compared to director Curtis Harrington’s impressionistic and justifiably well-regarded shorts, but it affirms his gift for establishing an atmosphere that comments gracefully on his characters’ desires and neuroses, which is to say that you don’t need to be familiar with the filmmaker’s prior work, or the direct quotation at the film’s conclusion, to work out the looming influence of Edgar Allan Poe.

The plot is that classic summer story of a boy and a girl briefly having each other before losing one another. Johnny (Dennis Hopper) is a seaman on shore leave who spots a beautiful girl while having a beer and listening to a jazz trio in a small bar. He introduces himself to the girl, who’s revealed to be Mora (Linda Lawson), who works as a “mermaid” for a local sideshow attraction run by father figure Captain Murdock (Gavin Muir). Mora is understandably a little hesitant with Johnny at first, presuming him to be just another sexually opportunistic sailor breezing through the cozy sea town, but she comes to return his attraction. The problem is a potential curse that’s clearly intended as a supernatural metaphor for the meddling families that always seem to gum up the machinations of young love.

Night Tide has been characterized as a horror film, but it isn’t, not really. This Harrington production consciously owes more to Poe’s “Annabel Lee” than “The Fall of the House of Usher,” as the film is firstly a poem of quiet longing. There are many eerie moments, but you’re more likely to remember Hopper’s touchingly sincere line deliveries (which are retrospectively intensified in contrast and poignancy by his subsequently achieved legend as a bad boy auteur turned occasionally brilliant character actor) and Lawson’s beautifully open face. And there are a number of masterfully evocative small touches, such as the continual sounds of the water breaking against the rocks of the shore, or the foreshadowing dream-like images of Mora’s face submerged underwater for her act, seemingly embalmed. The film is so lovely that the characteristic Harrington theme of incestuous obsession hits you nearly on the rebound, asserting itself with an intensity that empowers Night Tide to quietly grow in stature as you turn the film over in your mind.

There are scratches and instances of overexposure here and there, but the image is strikingly clear and detailed, the blacks bold and sharp, and the grain well-balanced. This transfer doesn’t boast any obvious, distracting signs of having been cleaned up to appeal to modern tastes either. The mono track is also surprisingly rich and nuanced, which is particularly notable during the latter stretches of the film that astutely balance legendary composer David Raksin’s distinctively melancholy score with the ambient sounds of the sea.

The audio commentary by Curtis Harrington and Dennis Hopper is the kind of quietly confident listen you would reasonably expect of two such venerable industry legends, though it takes them awhile to get warmed up. Harrington discusses the traditional problems of getting an independent film funded, while Hopper stresses Night Tide’s significance as an early American indie that anticipated the cultural explosion that was still a few years off (of which Hopper himself, as the co-star, co-writer, and director of Easy Rider, played a significant part). But it’s the little details that really stand out, such as Harrington recalling the trouble Hopper almost got into with port authorities over the dirty sailor outfit he was wearing for the film, as they mistook him for an actual sailor, or their attempts to remember where they caught specific shots. These moments echo the sense of poetic loss, of time elapsed, that permeates their film. A two-part interview that Harrington filmed in 1987 for the public-access show Sinister Image is also enjoyable and more valuable for affording the director room to discuss the general arc of his career, including his notable working relationship with Kenneth Anger. A few Kino trailers round out the package.

One of director Curtis Harrington’s most accessible films, Night Tide is less a horror movie than a beautifully despairing love poem of missed opportunity.