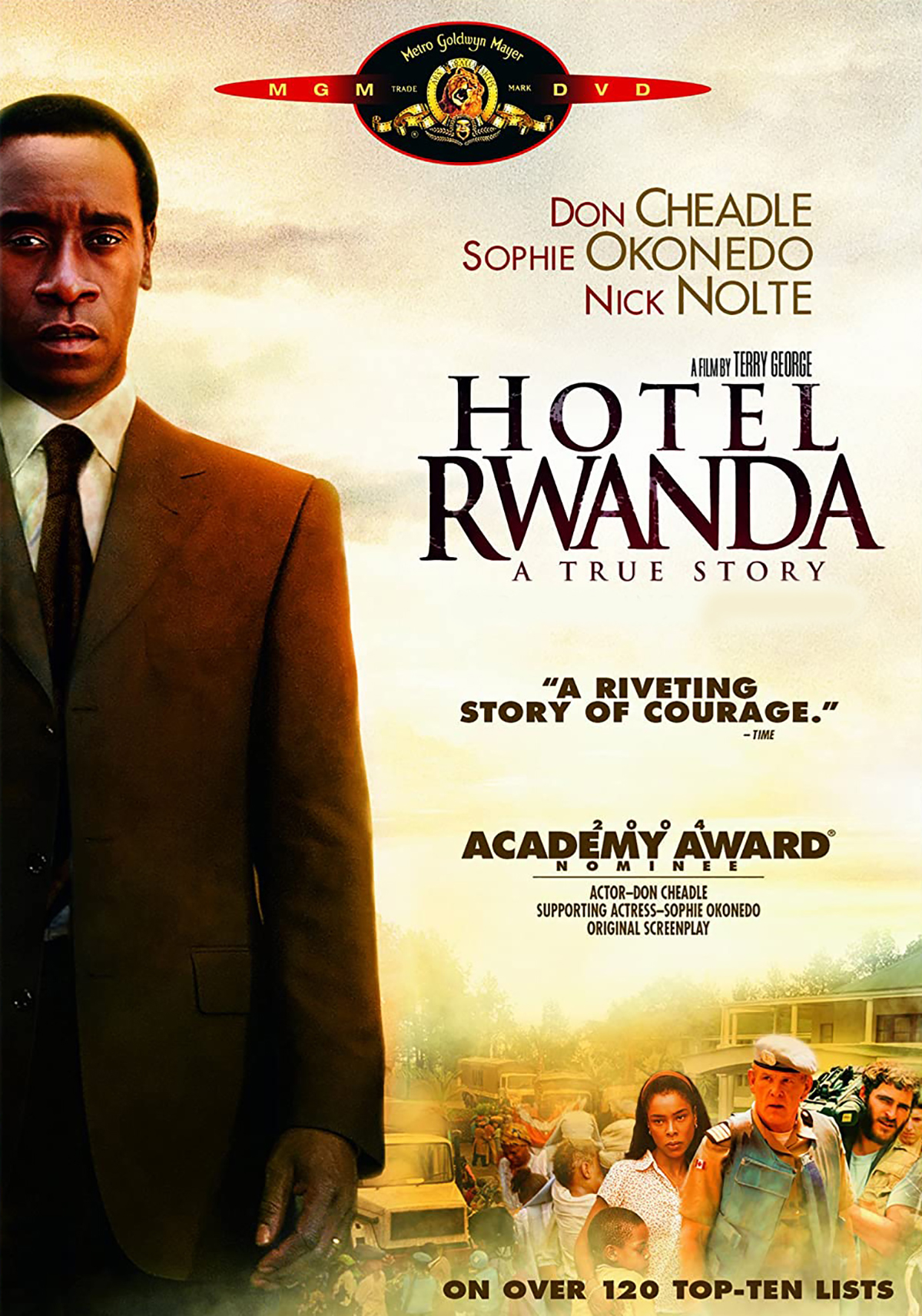 In We regret to inform you that tomorrow we will be killed with our families, Philip Gourevitch succeeds both in tracing the discord between Hutu and Tutsi tribes in Rwanda to a specious Hamitic myth perpetuated by the first white colonists that came to the region and indicting an entire Western community for not responding to the genocide in the country sooner. Hotel manager Paul Rusesabagina’s struggle to save countless individuals by hiding them inside the Des Mille Collines hotel in Kigali is documented in great detail in Gourevitch’s brilliant book, and now it’s the “inspirational” story behind Terry George’s Hotel Rwanda, which seems to take a cue less from history than it does from Schindler’s List. Clearly intended for white audiences unfamiliar with the political history of the region, the film cuts between “suspenseful” scenes of Paul’s repeated attempts to save his people from the Hutu barbarians outside the Des Mille Collines and simple-minded contextualizations for the violence in the region.

As a cameraman sent to the Kigali area, a dopey Joaquin Phoenix all but looks into the camera at one point and demands to know the root of the conflict in Rwanda, to which he’s provided with a Cliffs Notes explanation of the Hamitic myth and two women—one Hutu, one Tutsi—in order to more clearly illustrate its idiocy. This is history as Romper Room. Though director George understands the absurdity of the Hamitic lie that motivated the animosity between Hutu and Tutsi tribes, he seems ill prepared to seriously approach and treat it as such. George has done his homework—Tutsis are called “cockroaches” by the Hutus and a Hutu Power radio station is heard repeatedly blasting mixed (mostly hateful) messages—but history is literally reduced to background noise in the film. (The U.S. response to Rwanda is possibly Bill Clinton’s lowest moment and the embarrassing rhetoric of the administration’s refusal to classify the horrors in the area as “genocide” is superficially indicted at one point.)

Though the importance of the film’s subject matter cannot be underestimated, the sincere but misguided Hotel Rwanda does a disservice to the genocide in the region, reducing the atrocities in the African country to the stuff of a rote suspense thriller (The Grudge immediately came to mind). A critic who saw the film in Toronto e-mailed me to say that he considered the film “a spit and polished” interpretation of the catastrophe in Rwanda. Indeed, it’s amazing how little the film illuminates the discord between tribes in Rwanda or the refusal of other nations to dirty their hands when the genocide was in full swing. In focusing on one man’s story of perseverance, George unintentionally undermines the struggles of an entire nation. Ending with an unfortunately metaphoric one-liner by Don Cheadle along the lines of “there’s always room,” Hotel Rwanda could be an advertisement for lodging in Kigali.

In the end, George’s attempts to trick the Hutu Power and, to a lesser extent, make whoopee, register more than the genocide, the non-confrontational horror of which is evoked by the occasional shot of naked Tutsi women corralled by Hutu men and images of shocked Europeans shaking their heads or looking at the film’s blacks in horror. Numerous scenes suggest that invoking history is less on George’s mind than generating suspense and cheap sentiment: when machetes pour out of a crate that accidentally falls to the ground, a Tutsi hotel worker all but gulps in anticipation at the horrors that are sure to come; Paul (Don Cheadle) finds his wife hiding from Hutu raiders inside a bathtub and discovers she’s equipped with a weapon (a shower head no less!); and when Paul rides through a very bumpy and conveniently misty road before daylight, he discovers that they’ve been riding over a sea of corpses. That the filmmaker probably didn’t want me to reveal that last bit is indicative of where his priorities lie.

Image quality on this Hotel Rwanda DVD is crystal clear-so clear in fact it makes some of the film’s digital effects more noticeable, like the smoke seen over buildings in the background of many shots. But while skin tones are remarkable and shadow delineation is impressive, the edge enhancement consistently visible throughout is pretty embarrassing for a high-profile release like this one. The surround track is almost better by default: dialogue is clear but it’s the mood-enhancing score and constant whizzing of gunfire that steals the show.

Terry George opens the commentary track on this Hotel Rwanda DVD by stating that he will not talk about how he moved his camera while making the film. This is not an admission that the film is an aesthetic dud but a red-carpet welcome for Paul Rusesabagina, with whom he shares the track and who contributes some powerful and heartbreaking anecdotes throughout the course of two hours. (Wyclef Jean, who wrote a song for the film’s soundtrack, pops in from time to time to share his own thoughts.) Don Cheadle, whose advertisement for Amnesty International is included among the disc’s previews, has his own select commentary track, which runs for about 20 minutes. Rounding things off: the documentary “A Message for Peace: Making Hotel Rwanda,” the powerful “Return to Rwanda” (which shows footage of Rusesabagina and his wife returning to the Hotel des Milles Collines), and theatrical trailers for Hotel Rwanda, Osama, Hart’s War, Manic, Bowling for Columbine, and The Yes Men.

Fans of Hotel Rwanda won’t want to miss the opportunity to listen to the real-life subject of the film sharing his thoughts on the disc’s commentary track.