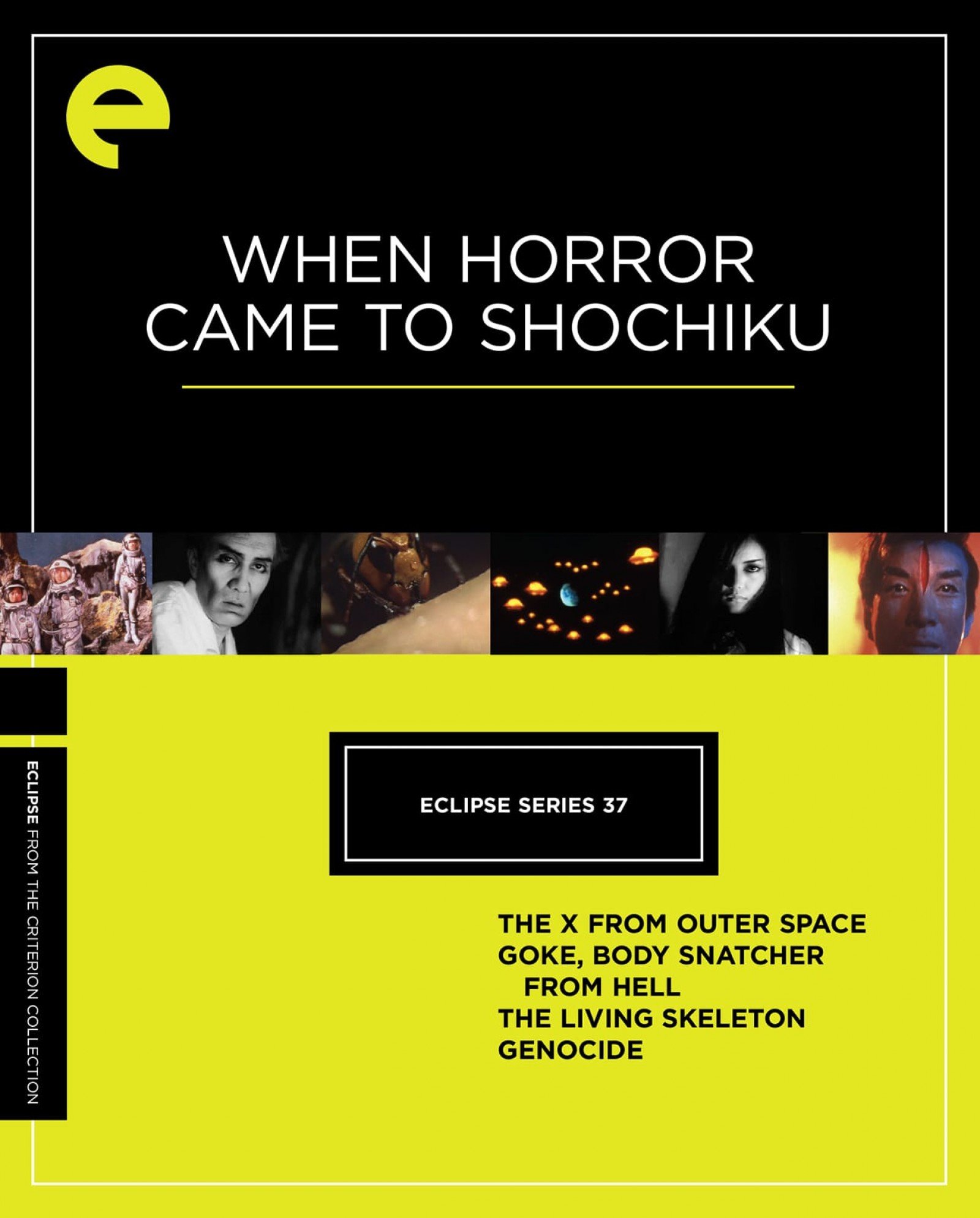 The iconic, radioactive sea-beast Godzilla had such a seismic impact, both literally and figuratively, on Western culture’s perception of the horror movie that it can be far too easy to overlook the industry-altering effect that Ishirô Honda’s 1954 namesake disaster classic had within the borders of Japan’s then-burgeoning cinematic landscape. Almost overnight, a country primarily known for the genre-leaning jidaigeki work of Akira Kurosawa and Sadao Yamanaka, as well as the working-class shomingeki parables of Mikio Naruse and Yasujirô Ozu, was transformed into a conglomerate assembly line churning out sequels, spin-offs, rip-offs, and cash-ins, all angling on a market with a seemingly insatiable appetite for destruction. This was particularly fertile territory in the wake of World War II and the Hiroshima/Nagasaki bombings, as audiences yearned for escape from everyday domestic issues, perhaps even utilizing the liberation as an exorcism of sorts. Not even Shochiku, the studio identified most readily with quotidian concerns, was impervious to the fiscal temptation, parlaying some of the goodwill built on by the work of such stalwarts as Ozu and Kenji Mizoguchi into a brief but indelible run of late-‘60s future-shock curiosities.

It’s important to note the period in which these films were made. As mentioned, mainstream audiences were seeking release, but the decade extending from the mid-‘60s onward was, in general, one of transition for a Japanese film industry concluding its golden age. The old guard were just that: Ozu and Mizoguchi were dead; Kurosawa had hit rock-bottom following Red Beard; Kon Ichikawa and Masaki Kobayashi were wrapping their last major works; and a new wave of ideological young filmmakers such as Nagisa Oshima, Shôhei Imamura, and Hiroshi Teshighara were tapping into a well spring of disillusionment on the art-house circuit. It makes a certain sense, then, that general audiences would gravitate toward the frightful and fantastical—and, moreover, it’s symptomatic of a trend that has afflicted the cinematic output of most major countries. For better or worse, none have completely rebounded, but in most cases there’s a playfully innocent streak running through each nascent scene’s formative output. Japan’s just happen to be wildly creative and audacious, at once vivid and surreal, illogical and supremely dumb.

Shochiku would only produce four films in this vein over a two-year period, but there’s enough makeshift innovation, thematic gall, and whacked-out imagery to sustain an entire subgenre. Kazui Nihonmatsu’s 1967 monster-mash The X from Outer Space was both the studio’s first foray into horror and their most patently ridiculous flirtation with genre trappings. To their credit, Shochiku would utilize their next three features to tap into other forms of cultural paranoia, but the debt The X from Outer Space owes to Godzilla is glaring and not the least bit reverent—which is, of course, from where the film derives most of its charm. When an interracial space crew—whites, blacks, and Asians populate all these films, each seemingly ripe for racial subversion at any given moment—returns from a voyage to Mars to study a sample of spores they’ve gathered off their shuttle, they accidentally unleash their experiment on Earth’s environment, triggering the awakening of a deformed dino-chicken hybrid set to wage war on an unknowing populace. Shoestring effects, goofy dialogue, and cardboard acting quickly ensue, like a Ray Harryhausen flick reimagined by a crew of anxious amateurs left alone with toy box full of miniatures and rubber body suits.

The following year would see the release of three divergent films of more original impulse. The first, the wonderfully titled Goke, Body Snatcher from Hell, begins with the hijacking and crash-landing of a commercial aircraft, but proceeds to abandon its topical origins as the surviving crew and passengers confront an alien life force that abducts unsuspecting human vessels, transforming them into sexually suggestive, split-cranium zombies attempting to overrun the earth. Director Hajime Sato seems to have grander themes on his mind that his chosen mode of presentation will allow for, but his success at crafting sheer entertainment isn’t to be dismissed. Hiroshi Matsuno’s The Living Skeleton, on the other hand, fully realizes its director’s visual and thematic ambitions, representing the peak of Shochiku’s dalliance with horror conventions. A chilling and genuinely unnerving black-and-white update of the bygone kaidan tradition, the film features undead siamese sisters taking revenge on the men who’ve done them wrong in lives both past and present. With its atmospheric cinematography, vengeance-fueled narrative, and intimations of feminism, The Living Skeleton can stand alongside, and would make a perfect double feature with, Kaneto Shindo’s J-horror feline classic Kuroneko.

Across all of these films, women—and in particular, white women—are portrayed in equal measure as sly, evil, and of ulterior motive. A female cadet provides enough distraction to nearly wipe out an entire planet in The X from Outer Space, but it was in Nihonmatsu’s next film for Shochiku, the appropriately harrowing Genocide, where the fairer sex would come under the most direct indictment. Insects may play the fatal antagonist of the film, like a more literal take on Imamura’s allegorical environmental conceits, but it’s an American female—horribly dubbed in Japanese, of course—who’s pulling strings behind the scenes. A multi-tiered narrative that Nihonmatsu handles with considerably more skill than his prior Shochiku effort, the film flits from relationship melodrama to wartime fable to hallucinogenic head trip with little sign of stress. Genre films don’t often cover as much ground stylistically or thematically as Genocide, let alone get more bleak (the film ultimately hinges on the potential detonation of a hydrogen bomb and the single mother that may have to single-handedly repopulate a country), but as the last horror film Shochiku would produce, it’s suitably ambitious and apocalyptic in its finality.

Considering their makeshift, handcrafted origins, the four Shochiku horror oddities comprising Criterion’s new Eclipse set translate in satisfyingly watchable form. The X from Outer Space does suffer from an interlaced transfer and a picture-boxed presentation, but on the whole, these campy digressions wear their inherent imperfections proudly. The colors schemes on Goke, Body Snatcher from Hell and Genocide are deep, varied, and bold, while the black-and-white cinematography of The Living Skeleton is wonderfully evocative and richly rendered. Original mono mixes are presented for each film, all easily audible, while an English dub is included for The X from Outer Space, only adding to the film’s base pleasures. Their individual sources probably preclude any sort of high-definition rendering in the future, but the A/V quality of this set mostly satisfies, begging for very little in terms of additional specs.

As per Eclipse standards, there’s nothing in the way of digital supplements presented here. Providing some much need contextual information, however, is critic Chuck Stephens, who provides liner notes for all four films, including a four-page insert on The X from Outer Space, outlining Shochiku’s place within this era of high-camp horror.

In the wake of Godzilla, not even Shochiku, a studio known for more quotidian concerns, was impervious to the fiscal temptation afforded by mainstream audiences seeking relief from everyday concerns. The four films the studio would produce over a two-year period in the late ‘60s would prove wildly creative and audacious, at once vivid and surreal, illogical and supremely dumb.

Review: Mark Cousins’s The Story of Film: An Odyssey on Music Box DVD