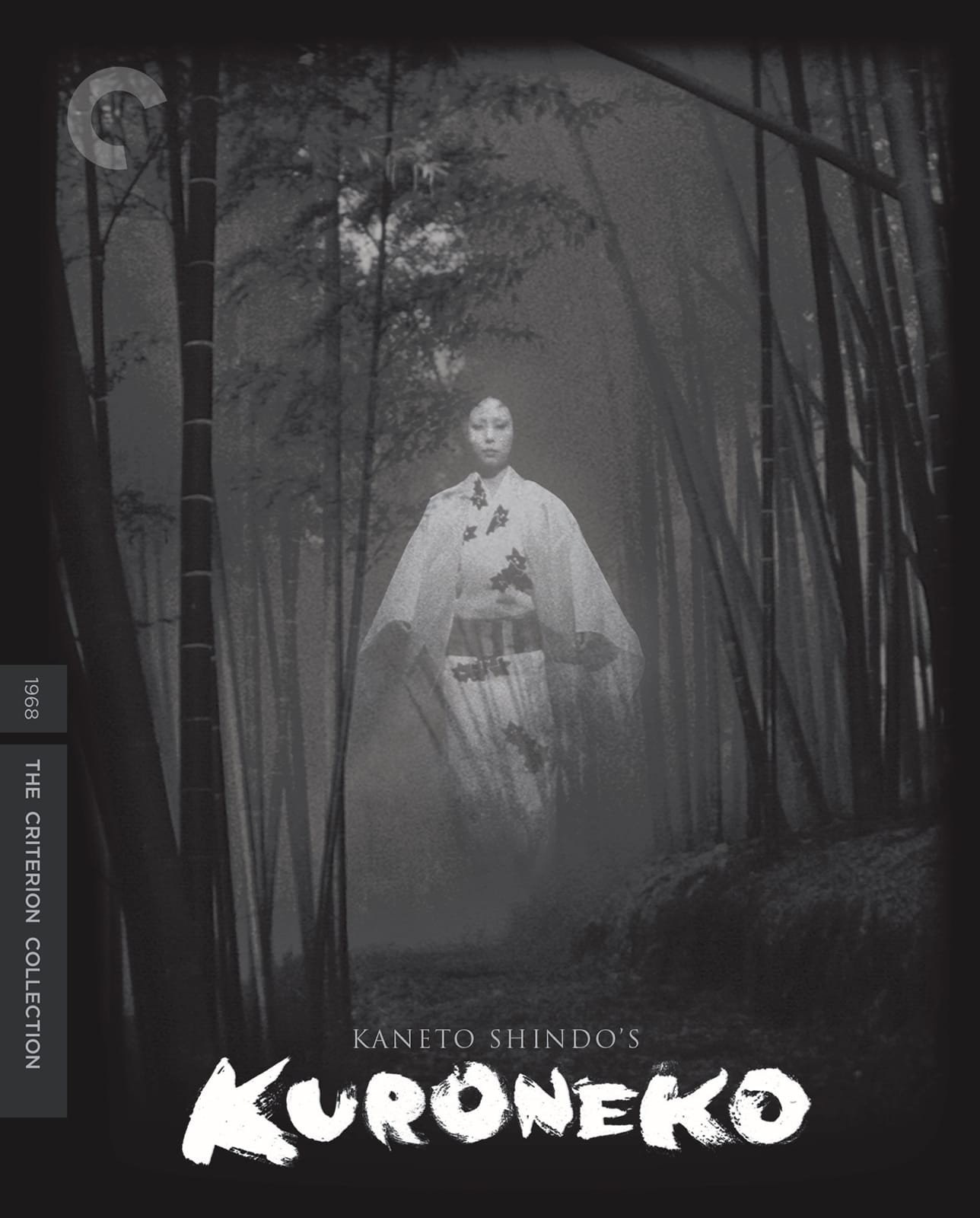 If the eyes are windows to the soul, the searing orbs of the glistening black cat sneaking through Kaneto Shindô’s Kuroneko tell a particularly bizarre tale. Born from the screams of earthly revenge and otherworldly evil, this sneaky feline acts as a supernatural bridge between hell on Earth and hell proper, a constant reminder of the unseen menace lurking in the high-contrast shadows of Shindô’s stylized shogun-era Japan. Considering its lush black-and-white aesthetic and jarring tonal shifts, Shindô’s unnerving horror film is a study in visual and spatial opposites. The madness opens with a near-silent assault perpetrated by disgusting Ronin on an unsuspecting mother and daughter. Quiet dominates the stirring long shot of a small house flanked by a thick tree line, the wind in the trees broken by physical movement as opposed to audible bursts. A legion of warriors flood the frame, and seconds later they’ve slithered their way into Yone (Nobuko Otowa) and Shige’s (Kiwaki Taichi) house, ravaged their bodies, and left them to burn in a smoldering grave. A black cat enters frame and begins licking the women’s deformed flesh and meows incessantly, bidding their souls to do the devil’s work. Agreement reached.

After the restrained prologue, Shindô jumps tonal registers and introduces a kinetic horror environment flush with sweeping camera moves, dramatic slow-motion effects, and brazen symbolism. A bit of time passes and Yone and Shige are now ghosts luring in samurai by playing on the very sex-crazed impulses they witnessed in their last moments of life. One at a time, Shige invites different warriors into her desolate country abode, offers them sake and her body, then devours their jugulars like a true tiger. The continuous line of samurai corpses enrages the local prefect Raiko (Kei Satô), a kind of Japanese Burt Reynolds who presents his bushy mustache and hairy chest as if they were his most valuable weaponry. Raiko enlists the help of a newly famous samurai called Hachi (Kichiemon Nakamura) to destroy the ghosts before his reputation as a strong leader is tarnished. But Kuroneko takes a devilish turn when Hachi realizes the ghosts he must kill are actually the mother and wife he begrudgingly left three years before.

Shindô splits Kuroneko’s surreal narrative between Hachi’s sexual reinvigoration with Shige and his emotional homecoming with his mother. Each coupling offers heightened confrontations seeped in shadow and texture, highly visceral moments that walk the line between rage and compassion, violence and tenderness. The outlines of Hachi and Shige’s contorting bodies are seen behind thinly veiled drapes, or up close as skin fuses together through sweat and tears. Shindô’s close attention to facial expressions frozen in extreme states takes on both a stunning and disturbing quality. Even in times of ecstasy, imminent tragedy rests on the lover’s silk pillows like dust waiting to be disturbed. Hachi’s volatile sequences with Yone, less stylistic but more emotionally abstract, further complicates his competing identities as husband, son, lover, and samurai. Through his eyes, Kuroneko becomes a true cat-and-mouse affair, one in which the power structures and gender roles can change mid-moment.

Aside from Shindô’s appreciation for the more uncomfortable psychological corners of the mind, Kuroneko is notable for its mind-blowing special effects. There’s a staggering shot of a nimble woman somersaulting over a samurai on horseback, a massive artificial sun overwhelming the foreground image of Hachi returning from battle, and a fluid split-screen aesthetic where the top of the frame appears to be circling around the static bottom half. All of these visual anomalies evoke the black cat’s powerful sway over the regular world, twisting logic and physics with each hiss. Therein lies the power of Kuroneko as a violent response against male vanity and arrogance, an ideology best represented in the moment Raiko justifies his violent actions by claiming “it’s a samurai’s world, now.” Yone and Shige destroy this notion by embracing the black cat’s gaze and the power it represents, taking back their body, mind, and spirit from beyond the grave. Yet the loony final act, which follows Hachi’s descent into madness in a serious of rigorous jumps in time, proves this pawing dark messenger may not be so gender-specific after all.

Horror fans couldn’t ask for more from Criterion’s lush 1080p hi-def digital transfer of Kuroneko. Every frame oozes with atmosphere, whether it’s the thick layer of fog hugging the floor of Yone’s forest catacombs, the blood splatter permanently ingrained onto one character’s face, or the swooping sequences of flight where ghosts seamlessly bend time and space. Even the rings around the bamboo trees frequently populating the frame are crisp markers of high-level clarity. The disc’s mono soundtrack is a different story altogether, as many sounds are calibrated to blur together, diminishing the overall impact of the film. The eviscerating drumbeats from the film’s score are nicely loud and piercing, but there’s a certain grogginess to almost every other diagetic effect, a trend that can’t be attributed to the original production’s seemingly poorly captured sound design.

Not much in the form of quantity, but what’s offered is nicely illuminative to the life and career of director Kaneto Shindô. A lo-fi hour-long interview with Shindô, conducted by his former assistant, Seijiro Koyama, for the Japan Directors Guild, begins with the director’s impoverished childhood and the time he spent living with his police detective brother, then continues to examine his career as a screenwriter and director. This in-depth look into Shindô’s life may look crummy, but it’s an essential document for fans interested in his passions and aesthetics. Film critic Tadao Sat? also offers a fascinating interview about Kuroneko and its historical importance, touching on the fact that Japanese ghost films were usually released every summer to coordinate with the Bon holiday, the time of year when regular citizens would welcome back the ghosts of their deceased family members. A high level of film studies and historiography is also offered in “Mark of the Cat,” a superb essay on the film by critic Maitland McDonagh, whose effortless prose is only matched by her attention to pertinent cinematic details. Also offered: an excerpt of a 1972 interview with Shindô and a theatrical trailer.

Kuroneko, and all its black cat magic, arrives on Blu-ray just in time for horror-film themed Halloween parties everywhere.

Review: Lucio Fulci’s The House by the Cemetery on Blue Underground Blu-ray