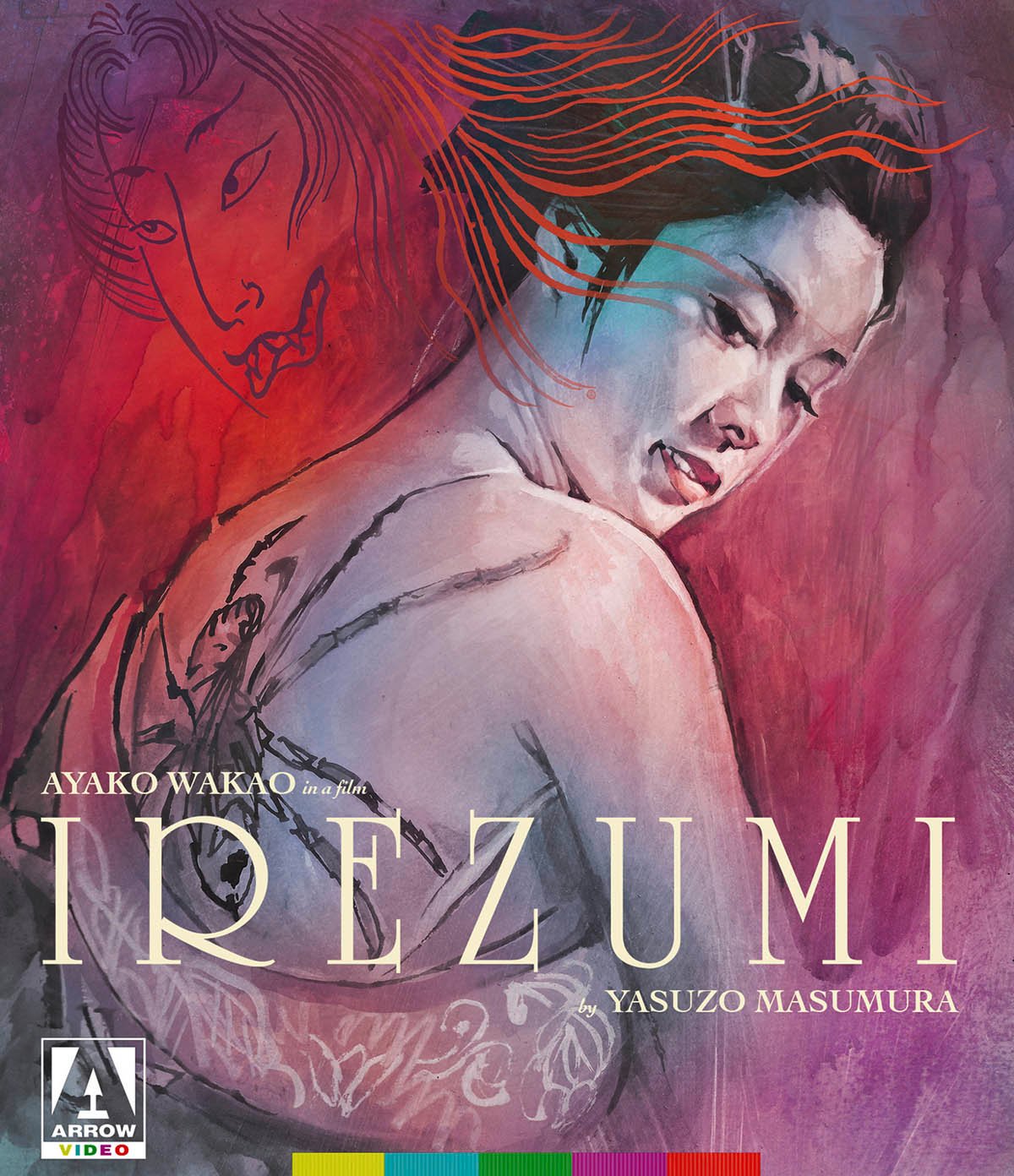 Opening with a candlelit assault and ending in a pile of bloodied bodies, Masumura Yasuzô’s 1966 film Irezumi is a tale of feminine revenge that boasts a rare pedigree. Led by box-office superstar Wakao Ayako (The Blue Sky Maiden), scripted by Shindô Kaneto (Onibaba, Kuroneko) from a story by prominent Japanese literary figure Tanizaki Jun’ichirô, and lensed by Miyagawa Kazuo (Rashomon, Ugetsu), the film is a testament to the legendary Daiei film company at the height of its golden-era powers.

Irezumi is set in Edo-era Japan and stars Wakao as Otsuya, a wealthy merchant’s daughter who finds herself taken with Shinsuke (Hasegawa Akio), a lowly employee of her father’s. While the duo are running off to elope, a disturbed tattoo artist, Seikichi (Yamamoto Gaku), catches sight of Otsuya’s alluring ivory flesh and targets her as the ideal subject for his masterpiece: a giant black human-faced spider that he forcibly emblazons across her back. Sold into prostitution, Otsuya uses her allure to exact revenge on those who have wronged her, willfully giving into the demonic influence of the half-woman, half-arachnid tattoo that covers her entire back.

Miyagawa brings his master’s eye for the heavy contrasts that are native to black-and-white photography to the lush color world of Irezumi, for which he chose Eastmancolor (at the time considered ill-suited to these purposes) to highlight the striking differences between Wakao’s luminous alabaster skin, the foggy forests and deep blue interiors of Daiei’s studio sets, the searing intensity of red kimonos, burbling blood, and, of course, the inky black female spider that adorns her back. But the film ultimately belongs to Wakao, who plays Otsuya with a glint in her eye and a dispassionate attitude toward her doomed quest for reprisal.

Though characters frequently talk of her being “possessed” by the tattoo, and Otsuya herself blames its malefic influence for her behavior, Irezumi is more convincingly about personal agency and the political power inherent in eroticism, both in everyday experience and its depiction in art. Though the forced insertion of ink into flesh spurs Otsuya to violent action, robbing her of her agency, it’s clear from Tanizaki and Masumura’s interests in sexual politics that the (anti-)heroine and the entirety of Japanese womanhood have within them the weapons for their own liberation, though art often serves as a necessary clarion call.

Arrow Video presents Irezumi in high definition 1080p from a new 4K scan. The restoration was performed from the 35mm negative and print damage is virtually nonexistent. The main character’s skin is practically the star of the show, which seemed to inspire cinematographer Miyagawa Kazuo just as much as it does the film’s villainous tattoo artist. Wakao Ayako seems to glow from within, especially in comparison to her co-stars, what with their more ruddy, realistic flesh tones, and Miyagawa’s labored-over color contrasts are beautifully supported by this transfer. The original uncompressed Japanese mono audio is understated, especially considering the film’s conservative, Kabuki-inspired score.

Arrow has assembled a collection of mighty extras that add a lot of value to this release. First up is must-watch introduction to the film by Japanese cinema expert Tony Rayns. Asian cinema scholar Daisuke Miyao is also on deck for Out of the Darkness, a brand new visual essay that goes into great detail about Miyagawa’s approach to visual storytelling and color photography, and Japanese cinema scholar David Desser also provides an amusing and informative commentary in his easy and pragmatic style. The disc, whose extras are rounded out by the film’s original trailer and an image gallery, comes housed with a reversible sleeve featuring original and newly commissioned artwork by Tony Stella. The first pressing includes a booklet with new writings by Miyao and Thomas Lamarre that go into great detail on the works of Jun’ichirô Tanizaki and their influence on Masumura Yasuzô.

Review: Robert Wiene’s The Hands of Orlac on Masters of Cinema Blu-ray