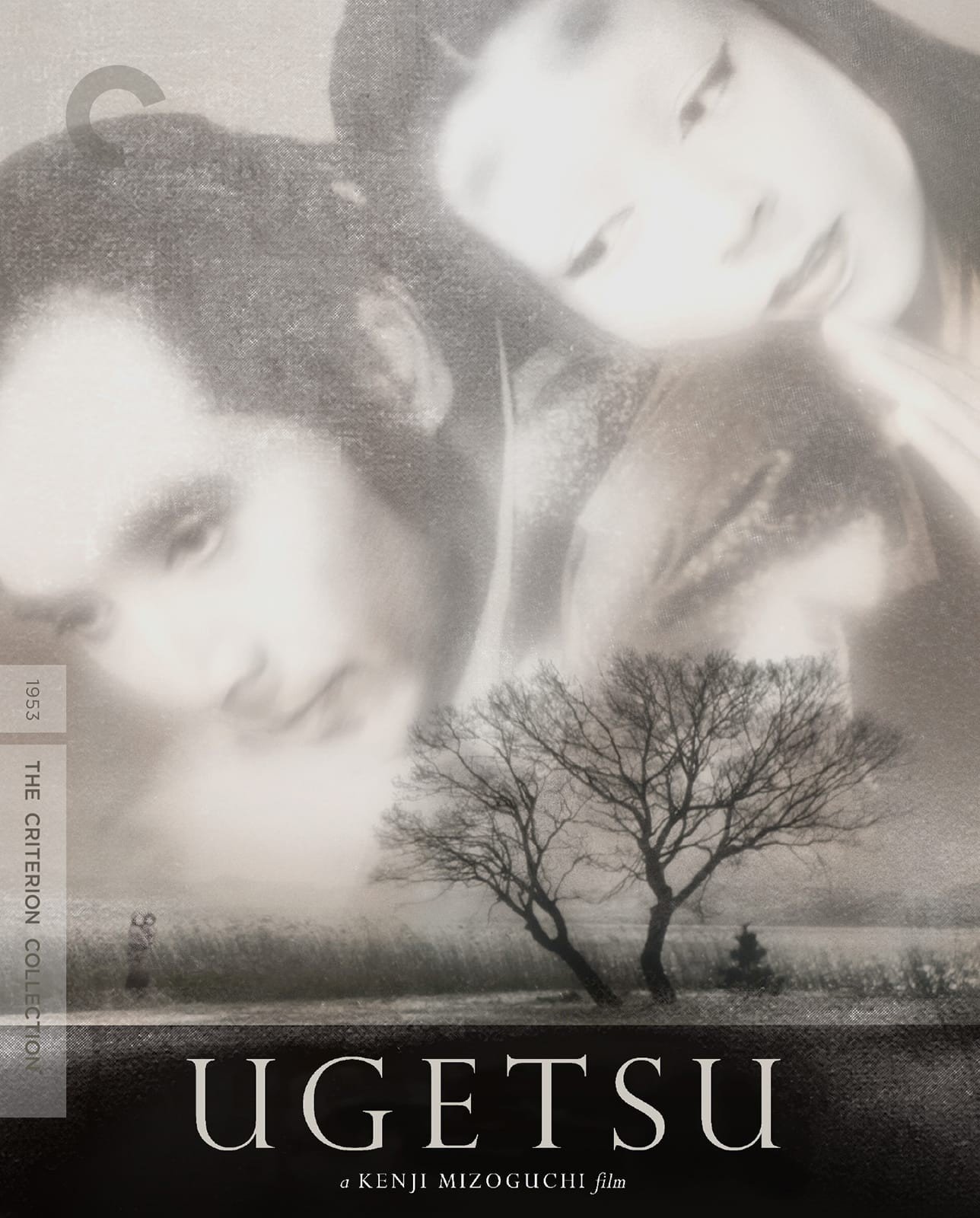 Kenji Mizoguchi’s staggering Ugetsu is a film of many riddles and paradoxes that unfolds with the illusory simplicity of a fable. Its initial straightforwardness, as a parable against the pitfalls of human greed, is a misdirection that leads the audience into a void in which objectivity and subjectivity intermingle, hopelessly and invigoratingly clouding rationality.

The narrative begins on the shore of Japan’s Lake Biwa in the 16th century, when the country was engulfed in civil war. Mizoguchi spotlights two neighboring families: Genjurō (Masayuki Mori) and his wife, Miyagi (Kinuyo Tanaka), and their child, Genichi (Ikio Sawamura); and Tōbei (Eitaro Ozawa) and his wife, Ohama (Mitsuko Mito). The heads of these families are broadly contrasted, as Genjurō is a serious potter while Tōbei is a stumbling ne’er-do-well whose dreams of becoming a samurai are ridiculous in lieu of his humble origins. (Mizoguchi is ruthlessly alert to the classism of the samurai code.) War is coming, and like many people unaccustomed to its savagery, Genjurō and Tōbei see only glory and self-actualization. The men wish to profit from the war so as to bolster their statuses in their wives’ eyes, while the women insist that the men are already enough for them.

It’s in this awareness of miscommunication that Ugetsu should particularly resonate with contemporary Western audiences, as Mizoguchi’s understanding of the tension existing between the sexes hasn’t aged an iota. The men launder their ambition through their women in a process of self-justification that reveals their feelings of inferiority. Patriarchy entraps men too, most clearly those of lower classes, nurturing a perpetual fear of impotency that’s ironically realized through the efforts to assuage said fear. Ugetsu’s early passages unfold with a hushed sense of inevitability, gradually building to a series of crescendos that will burst the men’s respective bubbles. A town elder warns the families to prepare for an incoming invasion, but the men are eaten up with dollar signs. Genjurō and Tōbei forge their wares and make a small killing at a village that’s experiencing an economic boom from the war, returning home with silver in their pockets. Genjurō buys Miyagi an expensive kimono, saying that he’s always wanted to shower her with such luxury. Whether or not Miyagi actually wants the kimono is immaterial.

Ugetsu is based on two ghost stories from Ueda Akinari’s collection Ugetsu Monogatari, which translates to Tales of Moonlight and Rain, and pivots on morals handed down from Japanese and Chinese cultures. Another significant influence on the film is the writing of Guy de Maupassant, which is evident in Tōbei’s narrative. These sources share with Mizoguchi’s work a heightened awareness of how we devise our own tragedies with our hypocrisies, and of how cruelty begets cruelty in an endless and self-perpetuating cycle. In Ugetsu, war is brilliantly evoked as an extension of the male ego: The Japanese civil war exists on the macro stage of society while the domestic tragedies of Genjurō and Tōbei occupy the micro. The civil war dramatically reconstitutes Genjurō and Tōbei’s families, scarring them in a fashion that parallels the destruction of the house of Lady Wasaka (Machiko Kyō), a spirit who enchants Genjurō while his own home turns to war-torn rubble.

The ironies here are elusively exponential, as a simulacrum of Genjurō’s dream—as the head of a house occupied by a beautiful, glamorous, and subservient woman—paves the way for his nightmare of rootlessness, which resonates with a postwar Japan that was occupied by the United States after losing its own quest for dominion. The film’s obsession with the splintering of families and the decisive castration and evolution of the modern male clearly parallels Japan’s crisis of identity following WWII, which Mizoguchi would explore again in Sansho the Bailiff.

Lady Waska moves through the frame with a languorousness that’s true to our perception of her supernatural otherness, or, even more movingly, as a masturbatory illusion of Genjurō’s. They have tea together and Lady Wasaka complements Genjurō’s pottery, understanding that men secretly treasure flattery as much, if not more so, than women. They embrace on the floor in a 69 gesture that follows a long shot of Wasaka crossing a room, her hair down to the back of her knees, suggesting a serpent in a flourish that’s sexy as well as threatening. We believe Genjurō when he famously says that he’s never known such pleasure, as Lady Wasaka convincingly suggests capital-S sex as pure flesh incarnate, complemented by the sensuality of Mizoguchi’s legendary long takes and in-camera editing.

Mizoguchi’s masterful staging conjoins the war narrative and the supernatural symbolism with frightening finesse, sometimes in a single shot, such as when Genjurō returns to his destroyed home searching for Miyagi, strolling out back only to re-enter the front of the residence to see her impossibly manifested, cooking by a fire. Embracing the flow of Japanese scrolls, Mizoguchi perfected an art of fluidity, blending expressionism and heightened neorealism in a manner that heightens each aesthetic via unlikely juxtaposition. When Genjurō and Tōbei’s families flee their invaded village, they sail into a lake of mist that suggests the River Styx, matter-of-factly guiding the audience out of a war film into a horror film and back into a war film yet again.

Later, as Miyagi collapses from a stab wound, we see her die as her killers enjoy their spoils in an elegant and devastating contrast of what war means to men and women, and to multiple variations of the empowered and the powerless. While Miyagi dies, Genjurō has the privilege of retreatment into an ecstasy that is, itself, enabled by male carnage. Ugetsu is a tragic and irreconcilably rapturous poem of violation. In the tradition of many male directors preoccupied with the atrocities suffered by women, Mizoguchi expresses his compassion through a pronounced and cleansing pitilessness.

Sourced from a new 4K restoration, this disc offers an image that’s substantially better than Criterion’s 2005 DVD edition. Quite a bit of debris, grit, and lines have been removed from this transfer, greatly bolstering an overall sense of richness and clarity. The blacks are much deeper and more stable than in prior editions, while the whites are softer and more varied. There’s also a greater tactility to this image, which is evident in the textures of the landscapes, the water, and the often pained and impassioned faces of the characters. The monaural soundtrack has been similarly refurbished, boasting fewer hisses and a more vibrant and delicate palette of diegetic and non-diegetic effects. The score, a classic in its own right, resounds with an especially diaphanous subtlety.

Yes, this is the same package that accompanied Criterion’s 2005 DVD edition of Ugetsu, but these supplements would be difficult to improve upon, as they offer an invigoratingly deep dive into Kenji Mizoguchi’s career while shedding light for Western audiences on the Japanese postwar culture that informed the film. The audio commentary by critic, filmmaker, and festival programmer Tony Rayns begins on a playful note, with Rayns conceding that many of his observations stem from a Mizoguchi book that he never finished. This drollness permeates a commentary that invaluably elaborates on the evolution of the filmmaker’s aesthetic over the decades, while riffing on the sorts of politics and personal relationships that inform art.

Rayns also discusses at length Ugetsu Monogatari, the story collection that partially inspired Ugetsu. This discussion is complemented by the interview with the film’s first assistant director, Tokuzo Tanaka, who shows us Mizoguchi’s oft-revised working draft of the film’s script. Meanwhile, “Two Worlds Intertwined,” a 2005 appreciation of Ugetsu by Masahiro Shinoda, abounds in beautiful and incisive observations, including the memorable assertion that the film includes “so many realities that they turn into a kind of fantasy.” (Shinoda also elaborates on the intricate, multi-cultured layering of the film’s score.) The 1992 interview with cinematographer Kazuo Miyagawa is the shortest on the disc, but still affords the legend the opportunity to compare vintage and contemporary methods of visual storytelling.

Tying the room together, so to speak, is a 150-minute documentary, Kenji Mizoguchi: The Life of a Film Director, which ingeniously weaves its own making into its narrative. The filmmakers retrace Japanese landmarks that are significant to Mizoguchi’s life, in the process providing Western audiences with a revelatory spatial sense of locations that were instrumental in the Japanese pre- and postwar film movements. Rounding out this package are trailers, a characteristically superb essay by Phillip Lopate that juggles Western and Eastern philosophies with surgical finesse, as well as the Ugetsu Monogatari stories that informed the script.

One of cinema’s mightiest and most bottomless of accomplishments has never looked or sounded better, with a vintage supplements package that provides invaluable analysis of Japanese film culture.

Review: Kenji Mizoguchi’s A Story from Chikamatsu on Criterion Blu-ray

Blu-ray Review: Alfred Hitchcock’s The Lodger on the Criterion Collection