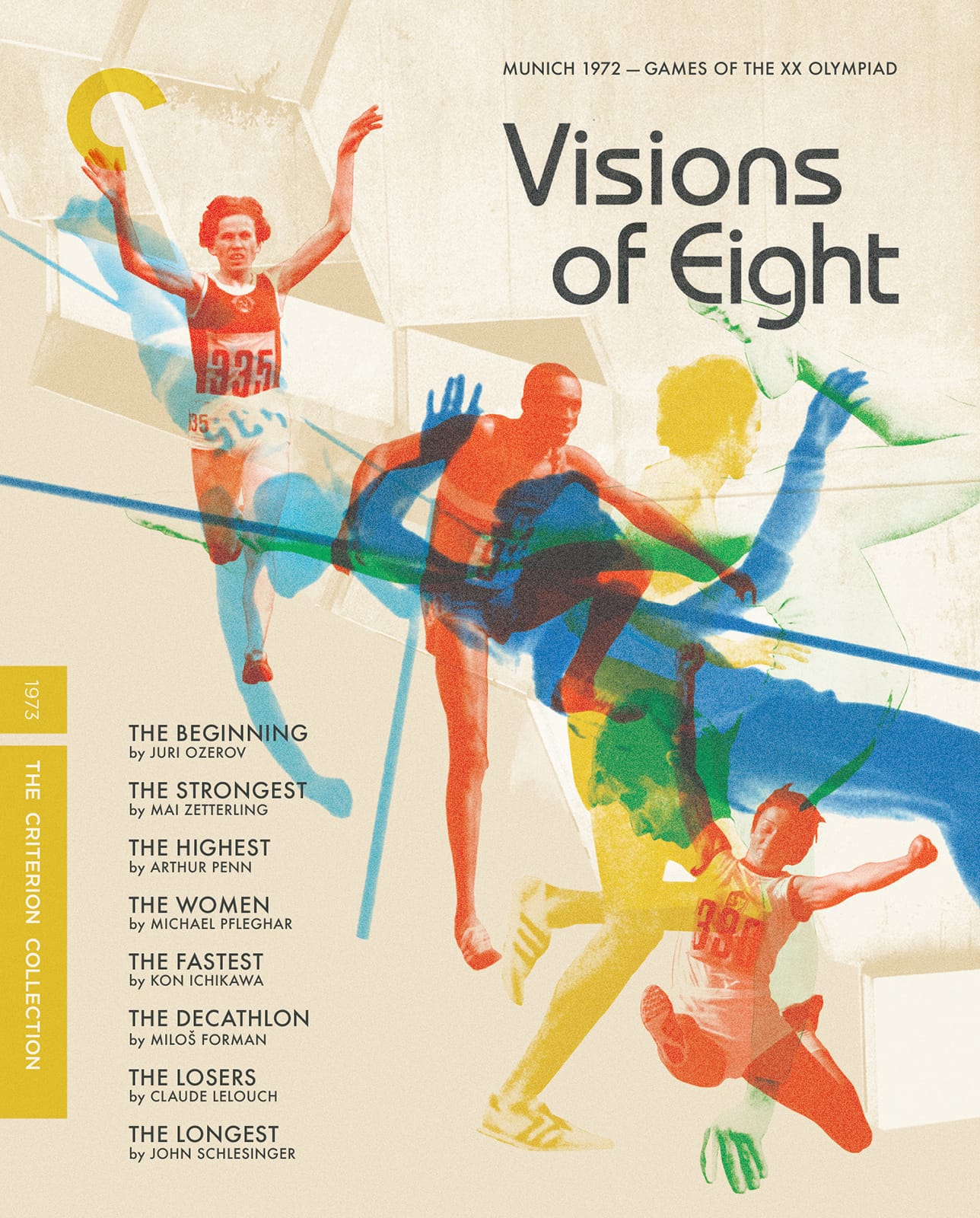 Per its self-important opening crawl, Visions of Eight’s title refers to the octet of “film artists” who contributed segments to this documentary omnibus lensed at the 1972 Summer Olympics in Munich. The film serves neither as a celluloid scoreboard of the competition nor a unified statement, a la Leni Riefenstahl, on the godlike glories of world-class athletes. Certainly, the spectacle of speed, strength, and (most piercingly) failure frequently assumes an epic dimension appropriate to the large role of the games (even before 18-hours-a-day TV coverage) in global entertainment, but something crucial is absent, and perhaps unattainable, in the film’s attempt at an impressionistic portrait of the tournament. Was it handicapped by the lack of experience of its directors in the field of nonfiction cinema, or more crucially by the hostage-taking and murder of Israeli athletes by terrorists midway through these Olympics?

Often relying on telephoto lenses, zooms, and other staples of live-event filming of 40 years ago (which inevitably give these disparate visions a textural similarity), the directors focus either on a single sport or a general theme. Arthur Penn captures the men’s pole vaulting as a semi-abstract montage of flying bodies, sinewy space travelers rising and falling in slow motion. The eschewing of identification of the competitors, and in most cases the backstories of their events, brings some confusion. When the silver medalist, Bob Seagren of the U.S., bitterly hands his pole to an official after his last vault, the inexpert viewer remains ignorant that it’s the result of a weeks-long controversy over equipment that preceded the event.

Among the other segments, Claude Lelouch’s “The Losers” memorably features a petulant defeated boxer throwing a prolonged hissy fit around the ring, and other hobbled and screaming would-be champions crashing to earth and being carried off by medics. Mai Zetterling’s “The Strongest” looks with awe at weightlifters, like the mammoth Soviet champion Vasiliy Alekseyev, not just as they bellow and strain under their burdens, but the grace with which they practice their form with empty barbells, and the serene camaraderie expressed by one Nordic giant combing the hair of another.

Visions of Eight, which is tied together by a Henry Mancini score that mixes pomp, playfulness, and borrowings from Debussy and Beethoven, is elsewhere a much more pedestrian affair. One segment on female Olympians overemphasizes their near-tears distress, and Miloš Forman brings a characteristic antic rhythm to his decathlon chapter by cutting to Bavarian bell ringers and attendants in eyesore-hued coats; the effect seems more a product of inattention than organic farce. Kon Ichikawa, who had filmed the Olympics before, reruns the 10 seconds of the 100-meter men’s final for six minutes, but his most arresting coup (the flapping facial skin of a sprinter in slow-mo) soon recurs in succeeding reels.

While John Schlesinger’s concluding study of the marathon incorporates the most extended treatment of the massacre that nearly truncated the games, it also brings the coldest insight into the tunnel vision of an alpha sportsman’s mind when a British runner remarks that all the killings mean to him is a delay of his race by one day. Despite this indication that getting “up close and personal” with athletes usually requires a measure of sentimental airbrushing, the documentary mostly supplies a nice auteurist roll call for its credits and a few isolated moments of physical beauty, in what it discreetly calls “the shadow of tragedy.”

Criterion’s release of Visions of Eight features a new 4K restoration that’s noticeably more vibrant than the transfer included on their 100 Years of Olympic Films box set. The picture is sharp and richly detailed, enhancing the beauty and strangeness of bodies in perpetual motion in the film’s many close-ups and slow-mo shots. As for the full-speed shots of various events, there’s little to no motion blurring. The uncompressed audio boasts an acutely balanced mix that highlights the intricacies of each film’s precise sound design.

Amanda Dobbins, Sean Fennessey, and Chris Ryan—hosts of The Ringer’s Rewatchables podcast—provide a lively and informative new commentary track. The trio have a great rapport and keep the discussion light and fun, while still providing plenty of analysis of the films and background information about how producer David Wolper achieved his unique vision of getting directors from around the world to each contributing to the project. They also offer consistently astute observations about the artistic impulses behind the eight directors’ unique approaches. The disc also comes with a brief promo film shot in 1972 and a new documentary, running just shy of an hour, that looks back on the making of Visions of Eight and, most fascinatingly, includes outtakes from Ousmane Sembène’s uncompleted short for the project. There’s also a lovely 48-page bound booklet with essays by author George Plimpton and novelist Sam Lipsyte, along with excerpts from producer David Wolper’s 2003 memoir.

With a new transfer and a pair of sharp, illuminating extras, Criterion’s release of Visions of Eight offers plenty of goodies not found in their 100 Years of Olympic Films box set.