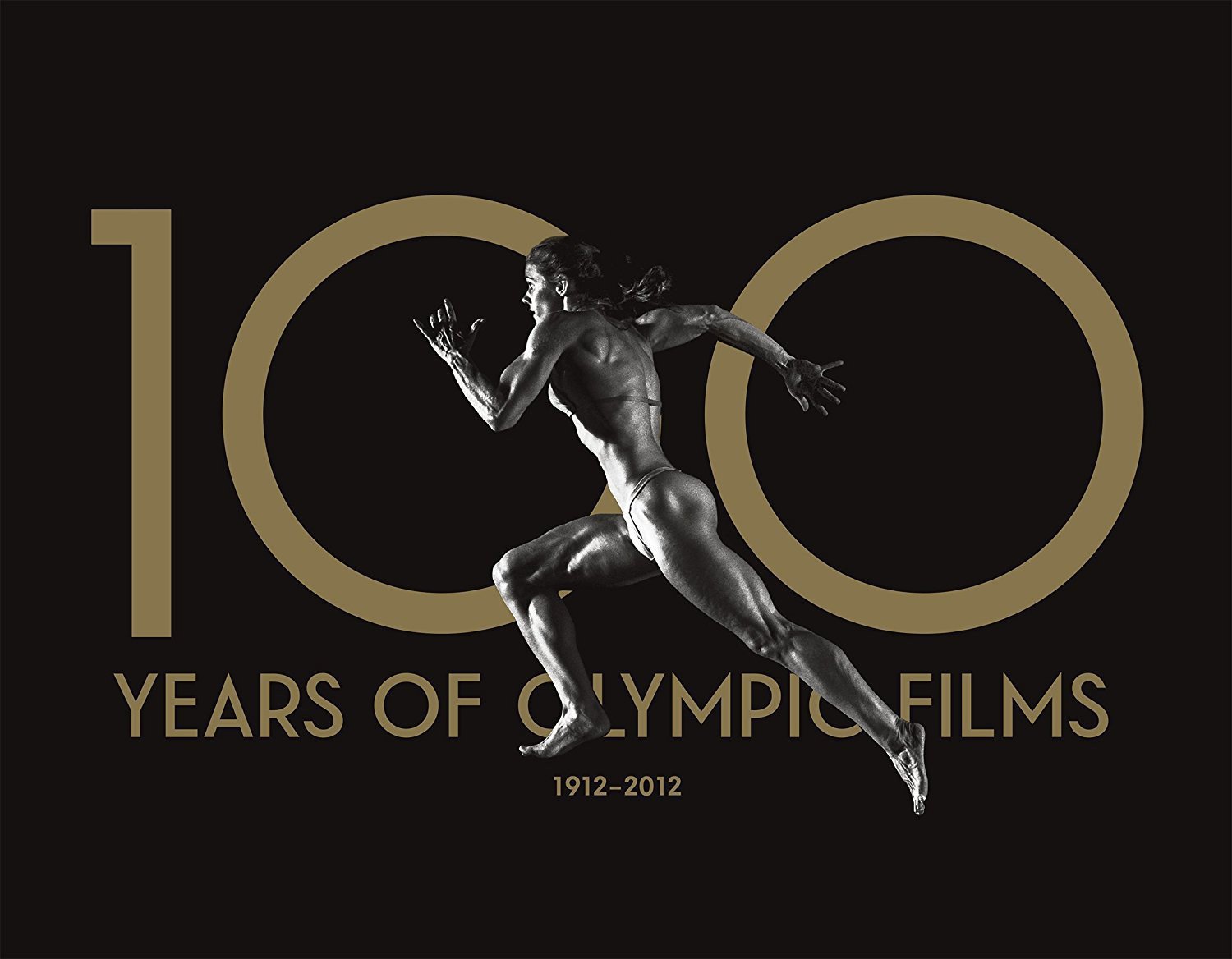 It’s sometimes easy to forget that the moving image was innovated by filmmakers who were simply curious to capture beings in motion. In 1895, Auguste and Louis Lumière filmed workers leaving the Lumière factory in Lyon to both witness the occurrence and visualize the quotidian dimensions of daily life. Though hardly an athletic event, the movement of people from the factory to its exterior establishes a precedent for the content of motion-picture photography that, in the intervening 120-plus years, has sought to capture the heights of human movement and endurance.

In 100 Years of Olympic Films: 1912-2012, a century’s worth of such attempts are housed within a single, 32-disc box set of newsreels and films documenting both the summer and winter Olympic Games. The cumulative result defies terse accolades; with a runtime totaling over 100 hours, the set depicts through sport the birth and evolution of one dimension of the contemporary human spirit. By extension, it also offers fascinating evidence of how the cinematic medium, and the markets for the Olympic Games, has adapted to envision that evolutionary process.

The 53 films in this set each seek, in some manner, to record moments when athletes are at their peak. Take the beginning of Sapporo Winter Olympics, filmed at the 1972 Winter Games, in which a downhill skier flies into the first shot in slow motion. Envisioning the Games as cinematic spectacle, director Masahiro Shinoda films in an ultra-wide 2.39:1 aspect ratio to convey a maximal sensory experience that’s meant specifically for the largest screen possible. That approach differs from that of Bud Greenspan, who made nine films from 1986 to 2007 that edit and package the Games according to storylines and summaries of competitions. Shot in a much tighter 1.33:1, these documentaries were initially made for the home-video market. Therefore, Will Lyman’s ever-present narration conforms to a nightly news presentation that Shinoda’s wholly image-driven vision steers away from.

A number of the documentaries begin with either a reference to or even recreation of the Games in ancient Greece. In fact, the 1924 short The Olympic Games as Practiced in Ancient Greece does precisely that, with shots of men leaping and wrestling in slow motion. XIVth Olympiad: The Glory of Sport, which documents the 1948 Summer Games in London, pays extended ode in its opening to the Olympics as being about “victory in sportsmanship and in peace,” with a Greek chorus complementing the sentiment. Shot in Technicolor, the film is reminiscent of Black Narcissus for its theatrical sense of spacing and ceremony. Tokyo Olympiad, from 1965, has the most comprehensive opening, as all 17 preceding Olympiads are individually enumerated to fill out a complete sense of the Games’s history. The nearly three-hour feature is the set’s crown jewel; director Kon Ichikawa interweaves an elegiac thread regarding Tokyo’s own past and present that casts the Games into a light informed by more than the realm of mere competition.

While the Games are the focus of all the films in this set, several directors take time to document the surrounding city. Throughout, snowy environs are depicted in luminous fashion, most notably in 1928’s The White Stadium, shot in St. Moritz by geologist turned filmmaker Arnold Fanck. The film is as much a testament to the beauty and majesty of St. Moritz as it is to the Games themselves. It was Fanck, in fact, who discovered Leni Riefenstahl and cast her in his “mountain films.” One imagines Riefenstahl had The White Stadium in mind when she filmed both parts of Olympia, though her sense of pageantry far outweighs Fanck’s more picturesque approach. Riefenstahl’s conception of the Games as a stage for espousing Nazi eugenics is thematized by sequences of ruins becoming renewed, of Nazi salutes as images of rebirth. It’s in 1936’s Youth of the World that snow and swastikas become entwined as backdrops to physical specimens of Nazi pride. No film following WWII conceives the host nation in nearly the same manner. Beginning in Fight Without Hate, filmed at the 1948 Winter Games in St. Moritz, the Olympiad is treated by filmmakers as a uniform symbol for progress and peace.

An especially intriguing facet of these films emerges in the ‘60s and ‘70s as filmmakers more known for narrative features try their hand at documenting the Games. The most daring in this regard is Claude Lelouch’s 13 Days in France, which opens with a statement reading, “This is neither a sports film nor a film with a message.” Indeed, the notion of these documentaries as belonging to a particular genre is challenged the most by French and Japanese films that borrow narrative techniques from their coinciding “new waves.” Jacques Ertaud and Jean-Jacques Languepin’s Snows of Grenoble, shot at the 1968 Winter Games, is practically Godardian in its editing and voiceover, with philosophical lines about a female athlete “skiing with her mind more than instinct.” Visions of Eight is easily the height of these practices, with filmmakers such as Milos Forman, Arthur Penn, and John Schlesinger each contributing a segment to an omnibus document of the 1972 Summer Games in Munich. And it’s Mai Zetterling who contributes the most perceptive short; in it, she documents the weight-lifting competition, saying in voiceover: “I am not interested in sports, but I am interested in obsessions.” The reflexive practice of making oneself an outsider by practicing one’s profession amid a world of insiders gives Zetterling’s images a unique dynamism that’s missing from some of the films made as loving testaments to various sports.

Even in later films featured in this set, like Hand in Hand, the Games are contextualized by the films to reference histories of war and turmoil between nations. The 1988 Summer Games in Seoul give director Im Kwon-taek the space to reference the geographical specifics of North and South Korea, and 1989’s Beyond All Barriers, directed by Lee Ji-won, puts a map on the screen that reveals the demilitarized (DMZ) zone between both countries. Taken as a collection of moments and historical impasses, the Olympics are a means through which nations make sense of their past, so that the highlights, glory, and ceremonies gesture outward to greater notions of perseverance that can be honed and honored away from the athletic field.

Oddly enough, the films from the first three quarters of the collection are the most pristine. The White Stadium and Olympia transfers are highlights; the former contains some of the most startling and luminous footage of snowy exteriors likely ever committed to celluloid. The 2K and 4K transfers throughout the set often ask to be seen on the largest screen possible, especially in the case of the films by Kon Ichikawa, Masahiro Shinoda, The Olympics in Mexico, and White Rock, all of which use their 2.39:1 aspect ratio to near miraculous effect. The only sour notes here are Bud Greenspan’s films, most of which have clearly, for whatever reason, not received any form of restoration. In fact, several of them look as though they might have been ported over from VHS versions, with blurry video and lines at the margin of the frame clearly demarcating their previous formatting. As with image on these discs, the sound varies in terms of quality, but by and large, these are wonderful audio restorations that capture, among other things, the piercing decibel levels of cheering crowds at the Games with remarkable verisimilitude.

This set defies standard notions of quality insofar as the sheer volume of content, 90% of which has been restored and preserved with grace and precision, far overshadows the lack of conventional extras. In fact, not a single disc contains a supplementary feature. Outweighing any sense of disappointment in the extras department, though, is a 216-page hardback book, with extensive liner notes by film historian Peter Cowie and numerous high-quality still images adorning each page. Cowie writes about every film in some capacity, mostly contextualizing production methods and circumstances. The book itself is an outstanding achievement, and easily the most elaborate piece of literature ever produced exclusively for the Criterion Collection.

If Criterion has become known over the years for regularly producing sets that could be called “film school in a box,” then 100 Years of Olympic Films: 1912-2012 raises the bar to something approaching a “film archive in a box.” In terms more familiar to the Olympiad, let’s call it the company’s record time.