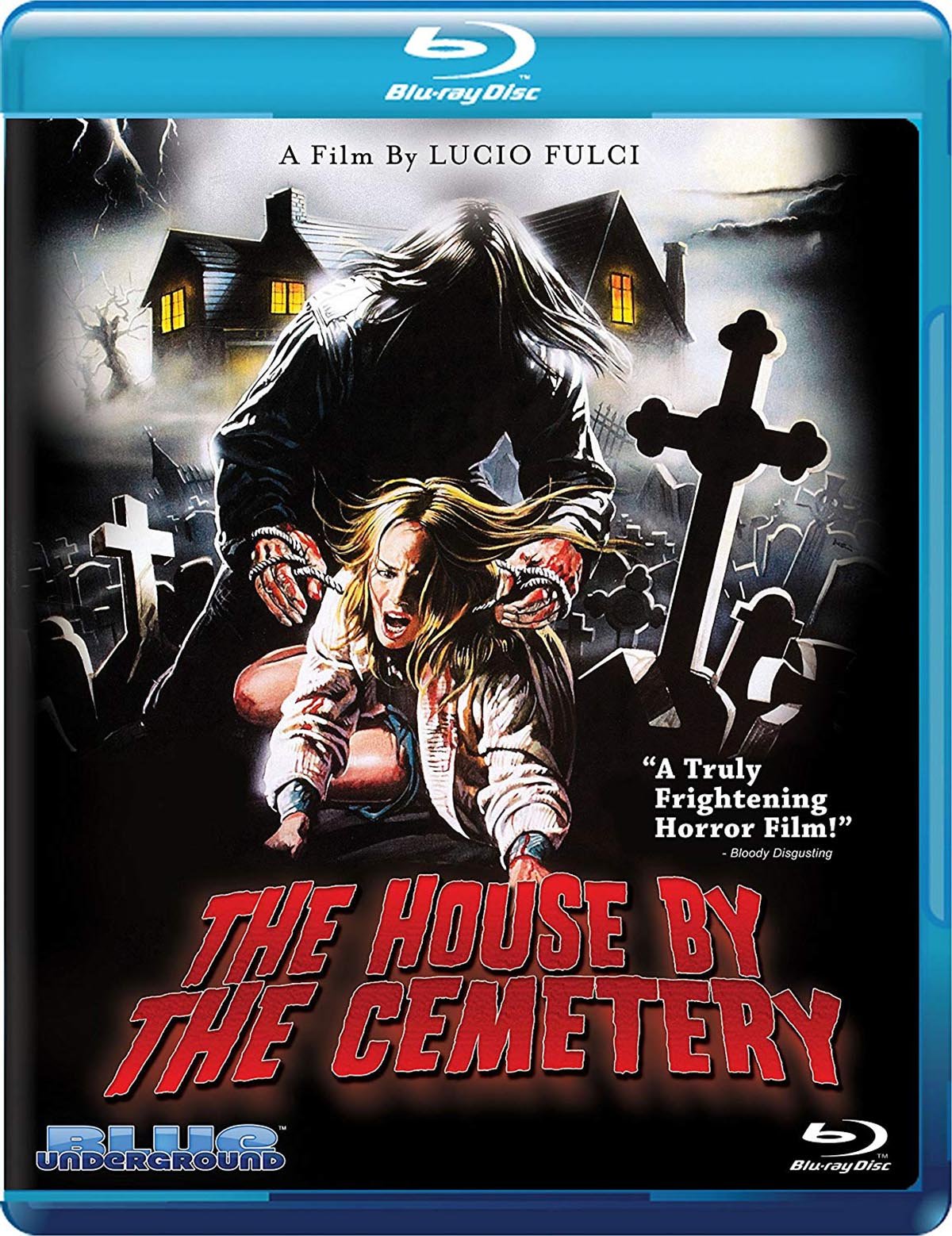 Several generations of fanboys have heralded Lucio Fulci as “the Godfather of Gore” (pace Herschell Gordon Lewis), and there’s splatter aplenty on display in The House by the Cemetery, from the opening murder set piece (a knife to the back of the skull that emerges from the victim’s mouth) to the penultimate killing (a major character gets their throat torn out). But it would be grossly reductive, not to mention flat-out wrong, to dismiss the film as mere gore-delivery system.

As with previous entries in the loosely linked “Gates of Hell” trilogy (City of the Living Dead and The Beyond), with their concern for the all-too-porous boundaries between the living and the dead, Fulci refracts influences both cinematic (The Amityville Horror and The Shining) and literary (Henry James’s The Turn of the Screw and any number of Gothic-inflected haunted-house tales) through the lens of his own darkly poetic sensibility. Fulci and his co-writers betray a fondness for the ambiguous and open-ended. None of the “Gates of Hell” films conclude with the restoration of moral or, indeed, cosmic order found in more conventional (read: conservative) horror films, and The House by the Cemetery’s haunting finale suggests, in the words of co-writer Dardano Sacchetti, that life is an ode to death as savior.

The setup is properly archetypal: New Yorkers Lucy and Norman Boyle (Fulci regulars Catriona MacColl and Paolo Malco), along with their young son, Bob (Giovanni Frezza), move to New Whitby, outside of Boston, so that Norman can continue the research of his colleague, Dr. Petersen, who not long before murdered his lover and then killed himself in the same “old, dark house” that the Boyles are now renting. The film, though, isn’t without a sly sense of humor. Witness the name of its monstrous mad doctor: Freudstein. The “mad doctor” epithet elucidates the cognomen’s latter component, but the Freudian aspects within the film are more manifold. Naturally enough, a free-floating feeling of the uncanny permeates the film, as in the numerous instances of déjà vu when the residents of New Whitby believe Norman has been there before, and surrounds the figure of Ann (Ania Pieroni), Bob’s eerie babysitter.

Then, too, there’s Freud’s suggestion that the uncanny (“un-home-ly”) is the opposite of the domestic, the familiar (in several senses) rendered unfamiliar, and therefore akin on the level of aesthetics to the formalist principle of defamiliarization. In The House by the Cemetery, the nearby graves quite literally invade the home, when Lucy discovers the headstone for the Freudstein crypt in the middle of their living room. At film’s end, when Bob escapes from the cellar through a rather vaginal-looking crack in the tombstone, the moment is a kind of rebirth, into the gray and wintry realms of the undead. By the same token, the monster inhabiting the cellar embodies the return of the repressed, whatever has been shoved deep down into the depths of the unconscious—here, quite possibly, Bob’s anger and resentment toward inattentive, even neglectful parents.

Fulci also accomplishes the act of rendering things unfamiliar throughout his dreamlike film by disavowing the linear mechanics of narrative logic. Inattentive viewers have always complained that Fulci’s infernal trilogy are incoherent texts, filled with dangling plot threads and unexplained leaps of logical faith, which indeed they are. Putting that down to rank incompetence, though, would be to mistake technique as the lack thereof and consistently misconstrue the sense of the playful and surreal that runs through even Fulci’s most graphic and brutal films, whether the Donald Duck-voiced killer in his grindhouse post mortem that is The New York Ripper, or the self-reflexive mise en abyme of The Cat in the Brain, wherein Fulci plays himself as a maestro of the macabre trapped within an endless nightmare constructed from cut-and-pasted gore scenes drawn from his lesser-known films.

Nor is Fulci above bits of self-aware parody that stick it to the conventions of Gothic horror, a sensibility that’s best evidenced here in the amusingly protracted bat-killing scene: Norman repeatedly stabs the flying rodent latched onto his hand with a steak knife until what seems like gallons of syrupy blood gush out, which Fulci follows with a smash cut to a smarmy realtor, glimpsed in an earlier scene, yawning in boredom.

The House by the Cemetery concludes with a quote allegedly drawn from the works of Henry James: “No one will ever know whether children are monsters or monsters are children.” It’s a false attribution, naturally, but one that nevertheless keys into the film’s layers of Jamesian ambiguity, of the “Is it real or all in your head?” variety, and invites comparison to Jack Clayton’s excellent film adaptation of James’s most famous story, The Innocents. Though Clayton’s film epitomizes the restraint and suggestiveness of the best psychological horror films, seemingly at antipodes to Fulci’s full-frontal assault of explicitness, both films have the capacity to burrow under your skin and plumb deep into your unconscious.

Blue Underground’s Blu-ray upgrade of The House by the Cemetery is a marvel, worlds apart from either the dismal Diamond Video release or Blue Underground’s earlier DVD in clarity and color saturation, especially one scene that captures the rainbow-bright colors of the Boyle home’s stained-glass windows. Post-synch dubbing in Italian horror films often lends an added layer of dislocation. That’s mostly the case in The House by the Cemetery, with one major exception: Whoever supplied the voice for flaxen-haired moppet Bob Boyle utilized one of the most shrill, vapid voices in the history of the voice-talent industry, captured with ear-piercing fidelity on the disc’s DTS-HD Master Audio track, as are the admittedly less irksome sounds of Walter Rizzati’s synth-soaked score, as well as recycled wolf calls that play under numerous scenes, often buried deep in the audio mix, brought into the foreground on a home-theater system.

A gracious plenty, almost all of which are new to the Blu-ray package: Most of the lead actors get their own interview featurette, either alone or in tandem, as do husband-and-wife co-writers Elisa Briganti and Dardano Sacchetti, as well as the cinematographer and a handful of special effects artists. Clocking in at the 10-15 minute mark, they’re all listenable and informative, especially the interview with Briganti and Sacchetti. The sole deleted scene is an extension of the bat-killing sequence, presented without any audio, and it adds precious little to the festivities.

Prime real estate for the horror film aficionado, Blue Underground presents The House by the Cemetery in a terrific new Blu-ray package.