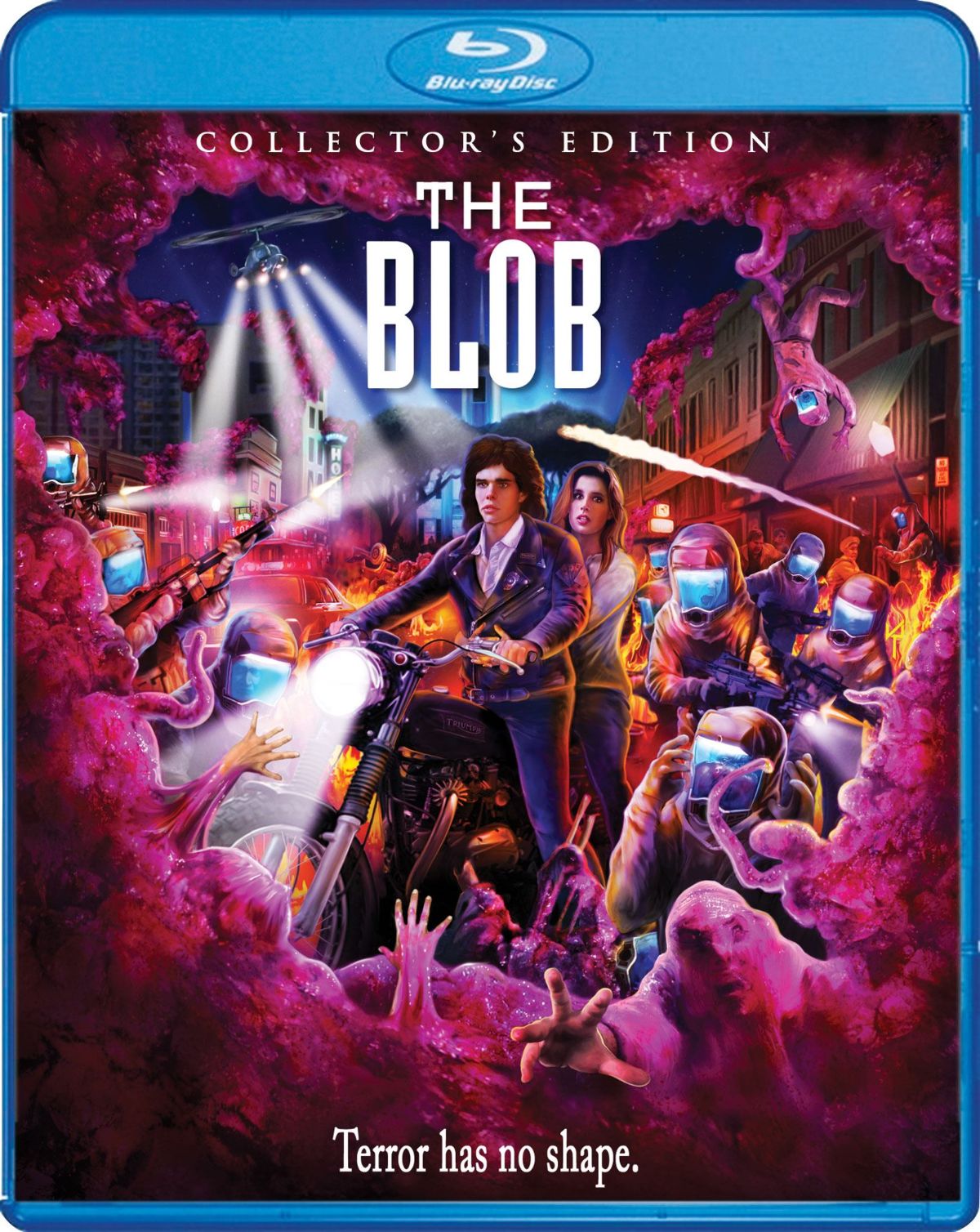 Chuck Russell’s The Blob toes a confident line between affectionate parody and straight-faced homage. Russell and co-writer Frank Darabont, at the time both young bucks hot off the surprisingly good and successful A Nightmare on Elm Street 3: Dream Warriors, clearly understand that the 1958 version of The Blob is ridiculous and hypocritically conformist, boasting young “rebels” that always seem to be ready at a moment’s notice to oversee the next policeman’s ball. The filmmakers also realize that a new Blob would have to up the ante considerably on the gore, which isn’t a tall feat in this case, as Irvin S. Yeaworth Jr.’s original film featured a jelly alien that was never seen doing much more than (weirdly and poignantly) ambling up an empty street with a casualness that might suit an offhand search for a soda fountain. Russell and Darabont shrewdly build these concerns into their version, transforming the titular blob into a vividly sticky, viscous creature and setting it loose in an anachronism of a small 1980s town that could fit, comfortably, into the world as it was presented by the already 30-year-old original.

The weirdness of this film’s small California town is never far from Russell and Darabont’s collective sense of awareness. Gorgeous establishing shots of the setting show us a burg that appears to be enviably beautiful and tucked into itself—a monument to “minding your own business” while the rest of the world goes to hell. A child attempts to cajole his mother into letting him go with his buddy to see a Friday the 13th clone, assuring her that there’s no sex or anything bad while boasting of all the dismemberments the film’s bound to contain. It’s a fun, decidedly Joe Dante-ish moment that skewers puritanical Americana while efficiently setting the stage for the eventual reenactment of the theater scene from the first film.

Most pointedly, the teenagers in this version of The Blob are actually shown doing the things that teenagers often try to do—namely, getting drunk and laid, preferably simultaneously. This carnality is often played for comedy at the expense of the teenagers’ parents, who all consciously resemble 1950s archetypes: the pharmacist, the diner waitress, the small-town sheriff, the folksy mechanic, and so forth. Most bluntly, the blob isn’t an alien this time, but a government experiment gone awry—a twist that informs the monster with a sense of metaphoric, Romero-esque outrage at society’s self-concern, and which also serves to undermine the authority that the original film unquestioningly celebrated.

But the filmmakers wear this subtext lightly; they’re pranksters, not preachers. The Blob is ultimately a drive-in movie similar to its predecessor, and the primary difference is that it happens to be pretty good. The most obvious triumph is the beastie itself, which has been reimagined as a memorably disgusting batch of ambulatory, ever-mutating, brownish-pink ooze that occasionally springs Thing-style tentacles while dissolving and contorting its victims in remarkably inventive fashions that testify to Russell and Darabont’s glee at implicatively tearing Mayberry down to its foundation. (My personal favorite set piece involves a poor dishwasher who somehow gets sucked down a sink drain.)

Like all great monsters, the blob is democratic in its bloodlust: Women, children, and the nicest guys most obviously up for the role of town savior are the first to suffer its indifferent, acidic wrath. The third act falters (too many perfunctory explosions and explanations, too little majestic blobbing), but The Blob still belongs to the tradition of ‘80s horror movies that updated ‘50s curiosities to surprisingly potent and resonant effect. It shows that a genre remake mustn’t solely be an act of studio bookkeeping, as it can also be a call for playtime.

Shout! Factory’s transfer is crisp and clear, and although colors appear slightly muted at times, the image has a nicely textured look throughout, going a long way to highlight the intricacies of the film’s homespun, yet impressive, practical effects and production design.
The neutral color balancing makes for consistently natural skin tones, while the strong contrast ensures a wealth of detail remains present even in the film’s numerous misty nighttime and dimly lit sewer-set sequences. The 5.1 audio is evenly mixed, presenting clean dialogue and giving a robustness to the more action-heavy sequences.

“Collector’s Edition” is typically nothing but a cheap marketing ploy, a meaningless phrase slapped onto countless Blu-ray covers in order to convince prospective buyers that they’re getting the best possible release of a film. But given the quality of the bountifulness extras on their release of The Blob, Shout! Factory actually gives fans and collectors a Blu-ray that will stand as the definitive edition of Chuck Russell’s undervalued gem for many years to come.

For starters, the disc comes with three feature-length commentary tracks, two of which are newly recorded. In the first of those, Russell, special effects artist Tony Gardner, and cinematographer Mark Irwin get into The Blob’s botched theatrical release, the influence of Hitchcock’s Psycho on the film’s narrative misdirects, and the challenges of location shooting and working on a tight budget. The trio also takes a stimulating and informative deep dive into how the practical effects were achieved and the tactics they used to get the blob to move in a naturalistic manner. The second and other new track, with lead actress Shawnee Smith, offers little more than aimless reminiscing and admiration for how well the film holds up. And the third track is a previously recorded one with Russell and producer Ryan Turek, and as such has a bit of crossover with Russell’s newly recorded one. But their rapport is engaging, and Russell’s passion for his work and that of others is unmistakable, especially as he discusses his personal feelings for Irvin S. Yeaworth Jr.’s original The Blob and how he tried to strike new ground with his remake, while remaining respectful of its forebearer.

The disc also comes with a staggering 11 interviews, covering virtually every aspect of the film’s production and post-production processes. If his two commentaries weren’t enough, Russell is also on hand for another 40 minutes of on-screen talk concerning, among other things, how he was inspired by silent comedians and everything he learned about stunt craft while on set with Roger Corman. Elsewhere, Irwin provides some fascinating anecdotes about his work with David Cronenberg on Videodrome and The Fly, while actors Jeffrey DeMunn, Donovan Leitch Jr., Candy Clark, and Bill Moseley all discuss their early acting influences and how The Blob changed their careers. But the most fruitful interviews here are with the film’s unsung heroes—production designer Craig Stearns, mechanical designer Mark Setrakian, and “blob mechanic” Peter Abrahamson—each of whom reveal technical tidbits about the nuts-and-bolts of practical effects that will be an absolute treat for anyone with even a passing interest in FX work. The package is rounded out with some silent behind-the-scenes footage of the assemblage of a handful of effects, a few theatrical trailers, and a TV spot that’s even more ‘80s than the epically feathered hairdo of Smith’s character in the film.

Shout! Factory’s new Blu-ray release of The Blob comes outfitted with a spectacular array of fascinating extras and the best transfer of the film to date.