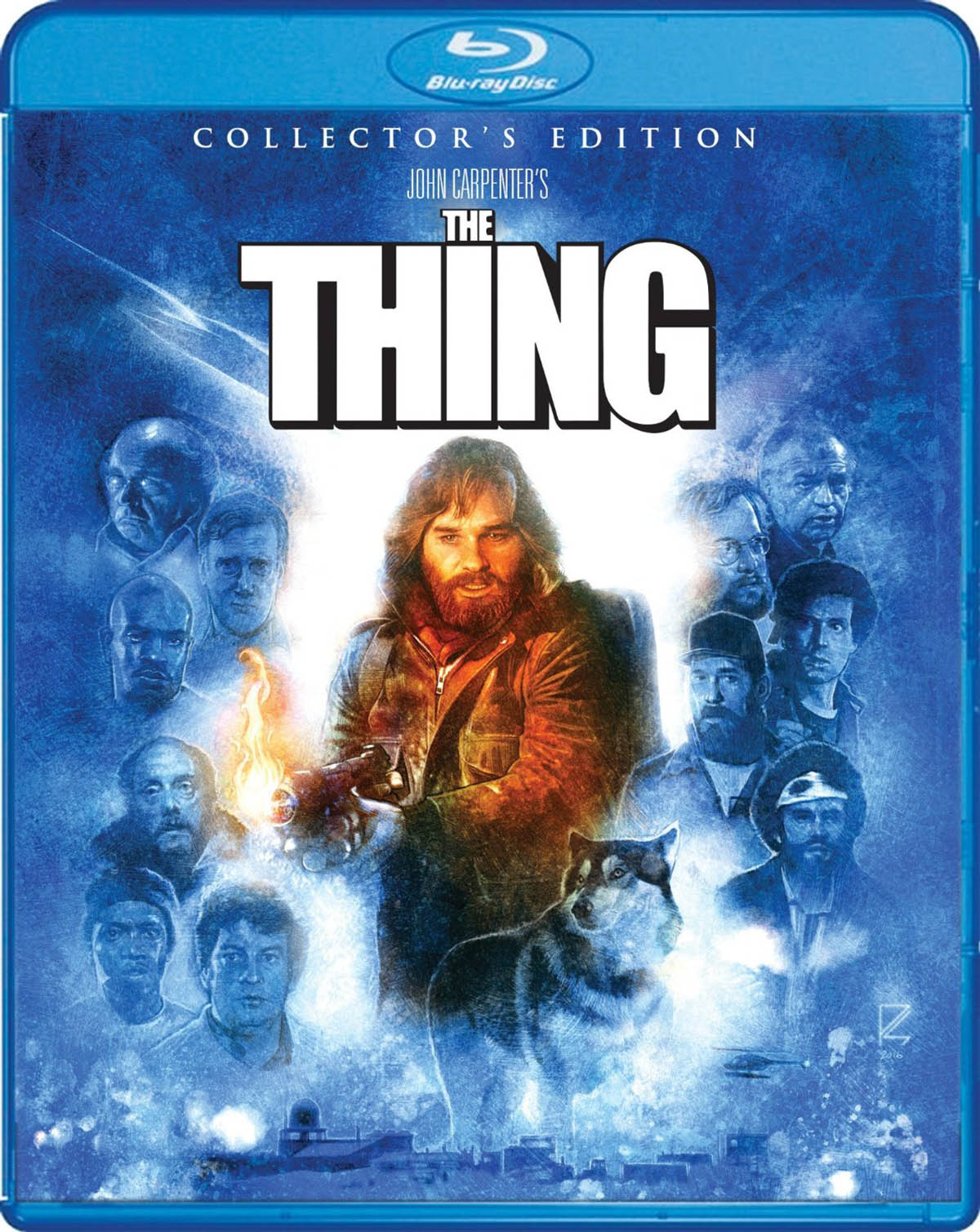 For all of the Grand Guignol overload of its special effects, The Thing is first and foremost an atmospheric film, one predicated on the claustrophobia and paranoia generated by its remote Antarctic-base setting. It’s there that a scientific crew discovers, then falls prey to an alien that can assume the form of any living being it touches, forcing the men stationed at the base to question the true identities of those around them. This is fitting material for director John Carpenter, who ironically used his biggest budget to return to the kind of small-scale, inward-looking horror of Assault on Precinct 13 and Halloween. But if the physical scope of the film is narrow, its tone is one of vast, cosmic terror, influenced in no small part by H.P. Lovecraft.

Beyond the plot similarities between it and At the Mountains of Madness, the film also captures Lovecraft’s sense of an alien horror so unfathomable that it transcends explanation. This fits well within Carpenter’s B-movie milieu, as it permits the filmmaker to bypass all but the most necessary exposition and avoid getting bogged down in details. The film opens, for example, with the mysterious sight of a Norwegian team of scientists destroying themselves in pursuit of what seems like an ordinary dog, but within minutes the Americans discover evidence of the other team having uncovered something alien just as it begins to infiltrate their own camp. Despite The Thing’s nearly two-hour running time, Carpenter keeps things economical, moving swiftly into grisly scenes of the “thing” tearing through the base.

Carpenter also augments the menacing omnipresence of the creature by keeping it from view for long stretches during which he builds the internal dynamics of the human characters. These men are rarely developed beyond broad archetypes: MacReady (Kurt Russell) takes charge largely because nobody else does; the antagonistic Clark (Richard Masur) and Childs (Keith David) are red herrings whose antagonism consistently marks them as the alien’s potential host bodies; and Blair (Wilford Brimley) is the one who figures out the true threat of the alien and goes insane from the knowledge of its apocalyptic implications. Conversations, even long ones, occur in terse sentences that reflect the men’s mounting stress, but also produce off-kilter rhythms that only compound the story’s overall sense of unease. Coupled with the relative anonymity of the assembled character actors, these interactions add to the sense that anyone could secretly be the alien.

Carpenter guides the tension with the graceful simplicity that marks his direction. His widescreen compositions are matched by precisely ordered camera placements that are rarely angled in any way other than parallel to the ground. Camera movement, with the exception of a few rushing point-of-view shots, is stately and patient, as cold as the base’s frigid surroundings. The filmmaker’s clinical atmosphere offers a bedrock of visual calm that only makes the amorphous, reason-defying nature of the alien all the more disruptive. Instead of reflecting the mania of the characters, the camera is an objective viewer, which casts a nihilistic pall over The Thing by telegraphing the hopelessness of the characters’ situation.

For all the atmospheric terror of the film, though, there’s no denying the value of Rob Bottin’s creature effects, which hold up as imaginative displays of gore. So much of Carpenter’s film can be boiled down to individual, nightmarish sights, like a chest splitting open to form a gigantic mouth, a head detaching from a body and sprouting crab legs, or just the squirming mass of flesh and assimilated body parts seen when the beast transforms. There’s no understanding this being, no studying it, only the visceral reaction of terror in seeing it. Individual survival is a lost cause, because the only happy ending any of the men can hope for is that their own deaths might contribute to containing the threat from infecting the rest of the planet.

Shout! Factory’s Blu-ray marks a considerable leap forward from Universal’s previous high-definition release. Textures and grain retention look more detailed, black levels are more consistent, and there are no contrast issues or instances of banding. Color timing has also been refined to further bring out the film’s blue tints. The audio offers a newly minted 4.1 mix drawn from the original 70mm presentation of the film, though it’s mostly the same as a remixed 5.1 track. Both are crisp and well-balanced, with dialogue clear in the front channel as the ominous strains of composer Ennio Morricone’s score fills in the spaces around the edges. The two-disc set also comes with a lossless mix of the 35mm cut’s 2.0 stereo track.

The first disc is home to still galleries and trailers along with the feature film, but the main draw may be the three commentary tracks. Cinematographer Dean Cundey and co-producer Stuart Cohen’s tracks are more information-based, with Cundey in particular delving into the technical aspects of the shoot. John Carpenter and Kurt Russell, in contrast, spend most of their track cracking up at the film’s gore, albeit with copious anecdotes sprinkled amid their conviviality. Disc two offers a plethora of extras, from new interviews conducted with Carpenter and various members of the cast and crew, to archival EPK featurettes on various aspects of the production. There’s also a making-of documentary that largely covers all of the material explored on the featurettes, as well as outtakes, a production archive, and even an entire copy of the network TV edit of the film, sourced from a heinous transfer that somehow adds to the degraded, chopped-up nature of the presentation.

John Carpenter’s Lovecraftian masterpiece finally receives its home-video due with an exceptional A/V transfer and a slew of extras courtesy of Shout! Factory.