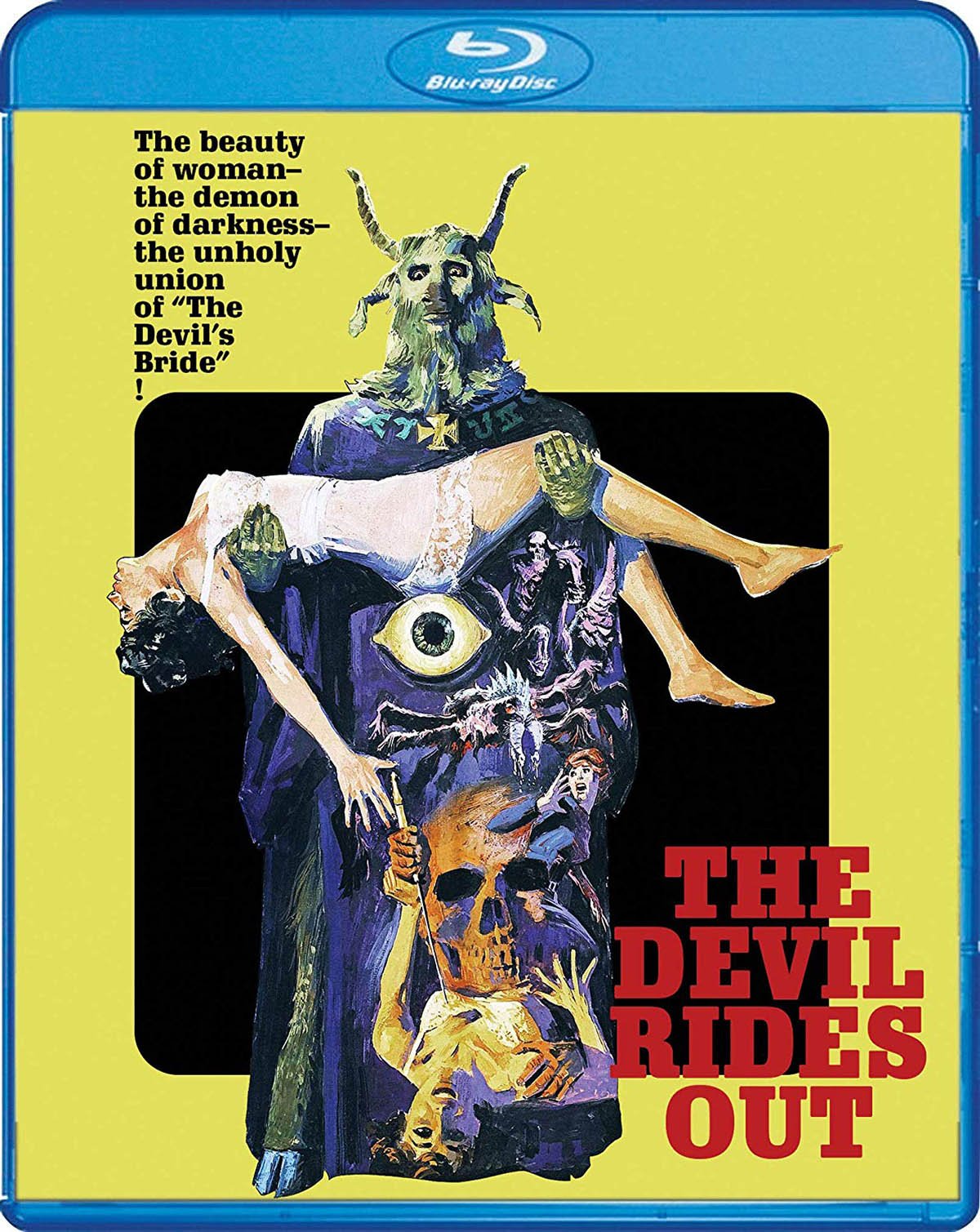 Christopher Lee was Hammer Films’s most popular and versatile performer. Well, perhaps versatile isn’t quite the word for it. Even though Lee was equally effective in roles on either side of the good-evil dichotomy, he seemed uninterested in the territory of ambiguity. And again, that’s too hasty a judgment, because there’s something truly subversive about Lee’s intense way of bringing similar qualities to roles that either brandish the banner of virtue or vice. Fully capable of playing self-righteous Christian soldiers with the most granite of jaws as well as embodying the honeyed seductiveness of evil incarnate, Lee demonstrated how most continuums are less like straight lines with good and evil situated as far as possible from each other, but rather like a circle where extreme behavior is actually closest to exactly the thing it hates.

Take Terence Fisher’s The Devil Rides Out, where Lee plays the Duc de Richleau, a modern-day warrior-saint against a cult of Satanists (led by the always silken Charles Gray) out to ensnare his surrogate son, Simon (Patrick Mower). From the first scene, where de Richleau arrives to meet their mutual friend, the skeptical Rex Van Ryn (Leon Greene), at an airstrip, Lee seems to be sniffing out the evil. Arriving at Simon’s mansion that evening, his eyes are immediately drawn to the astrology observatory. When his suspicions are confirmed (the group of pagans have gathered in the living room and Simon begs de Richleau and Van Ryn to call on him another evening because they’re interrupting his “society meeting”), Lee books it to the observatory and almost instinctively knows where to find the sacrificial roosters.

“I’d rather you were dead than fooling around with this,” de Richleau growls to Simon, in full-blown moral outrage. Not to downplay Fisher’s top-notch work (the Hammer auteur turns the centerpiece “circle” sequence into an endless nightmare of atmosphere, suggested evil and, finally, terrifying manifestations) and famed genre novelist Richard Matheson’s smoothly structured screenplay, but Lee’s performance pushes The Devil Rides Out from being merely one of Hammer’s better films into the territory of horror classic.

Shout! Factory’s 2K scan of Fox’s interpositive looks positively smashing, a definite cut above the prior Studio Canal HD edition. Colors are deeper and richer, with more satisfying skin tones and black levels, and a definite boost to fine details. (For the record, the Studio Canal version, with its digitally “completed” special effects, is available here as an extra.) The Master Audio mono track sounds pretty good, with just a touch of hiss and crackle occasionally evident, but nicely putting across James Bernard’s score, by turns haunting and rollicking.

Shout! presents a roster of bonus materials carried over from prior home-video releases, as well as several new extras. From Anchor Bay’s 2000 DVD, there’s an archival commentary track featuring actors Christopher Lee and Sarah Lawson, moderated by Hammer historian Marcus Hearn, that’s an easygoing, engaging listen, with Lee discussing his role in getting the film made and playing a protagonist for a change. The archival “World of Hammer” featurette is a fun but superficial overview of the studio’s history, narrated by actor Oliver Reed.

More recent featurettes come from Studio Canal’s 2010 Blu-ray. “Black Magic” is a satisfying making-of piece with recollections from screenwriter Richard Matheson, actor Patrick Mower, and the children of special effects supervisor Michael Stainer-Hutchins, as well as several film historians and critics. And “Dennis Wheatley at Hammer” examines the popularity of the writer, his views on the occult, and the process of adapting Devil Rides Out (as well as The Lost Continent, which was shot simultaneously), and the outrageous mid-‘70s Satanic panic exposé To the Devil…A Daughter (not to mention Wheatley’s indignant response to that last title).

There are also three newly commissioned extras. A commentary track featuring film historians Steve Haberman and Constantine Nasr and Richard Christian Matheson (son of Devil Rides Out screenwriter Richard Matheson) is an information-packed examination of the film that offers some great tidbits about how elements from Wheatley’s novel (like a mummified penis) were carried over into the elder Matheson’s script but never made it to the screen. The commentary also details some key differences between the book and film’s conception of several characters, including the suppression of one character’s Jewish heritage.

“Satanic Shocks” finds critic Kim Newman waxing enthusiastic about Matheson’s contribution to the film while pretty thoroughly slagging the source material, though Newman does take great pains to situate the novel within Wheatley’s larger body of work, and he has some cogent points to make about where Hammer Films was at this point in its history. And in “Folk Horror Goes Haywire,” critic Jonathan Rigby delves into the Swinging Sixties social and cultural context, the downward-spiraling career of director Terence Fisher, and the fact that Hammer initially wanted Charles Boyer (in all his Frenchy-ness) to star as the Duc de Richleau.