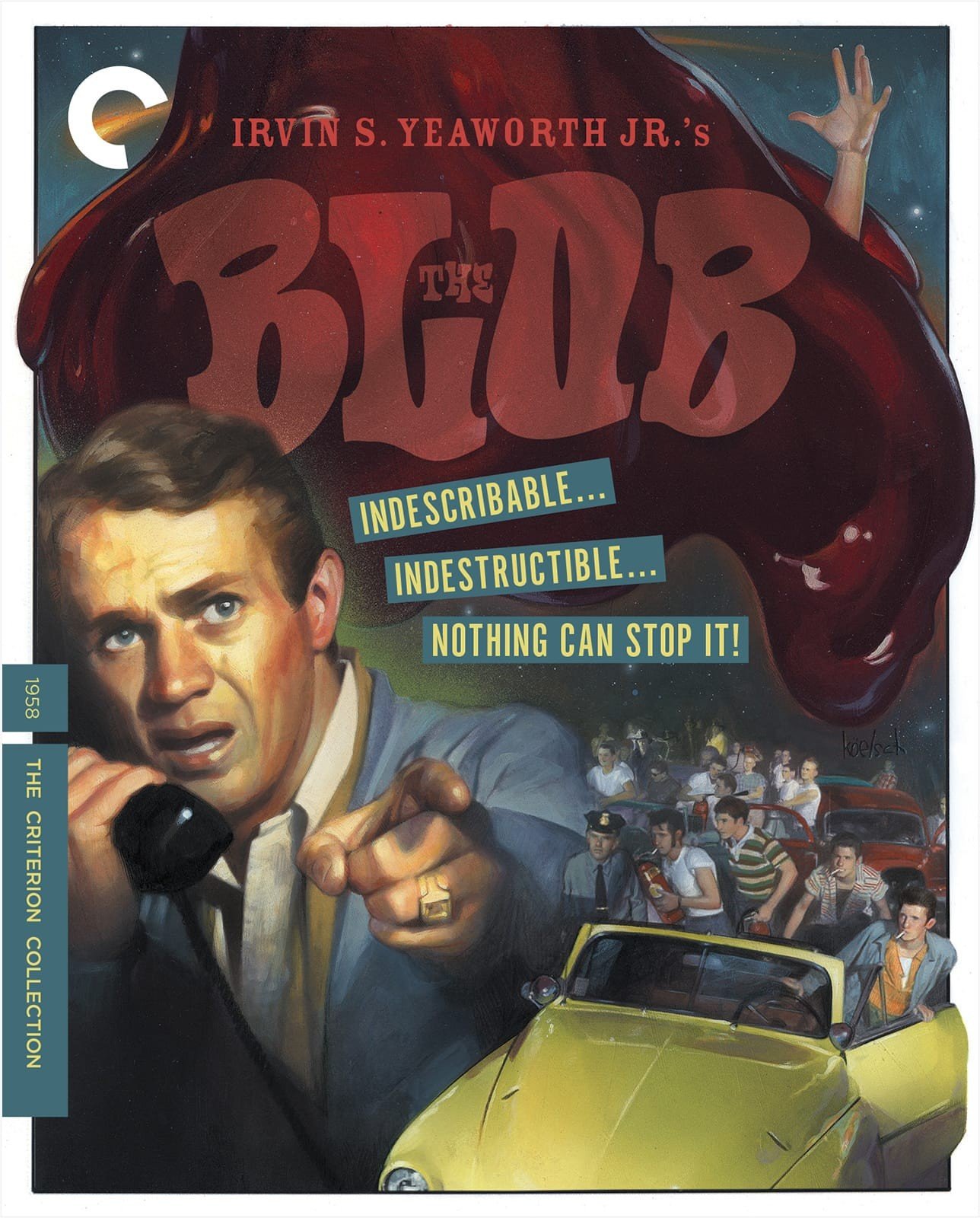 Irvin S. Yeaworth Jr.’s The Blob offers us a titular monster that’s oddly chilling for its utter ridiculousness. Essentially an ever-expanding orb of carnivorous cherry Jell-O, the blob has a Dadaist irrationality that’s reminiscent of nightmares where we’re unable to evade pursuers for increasingly indiscernible reasons. This gelatinous space beast may be comical in appearance and slower than cooling molasses (even the creakiest of cinematic mummies could handily beat this thing in a foot race), but it always manages to corner its prey, most prominently in a climax that features a memorable image that suggests what might happen if Tim Burton were to doodle over an Edward Hopper painting.

The film’s tone suits its monster; it’s creepy in a nonsense fashion that’s probably mostly a happy accident. The Blob is one of those horror films that benefits from surreal dissonances that have arisen from a simultaneous lack of resources and technical inconsistency. The tone varies from moment to moment, and there are reverse shots, particularly in scenes featuring a large crowd of people, that are jarringly mismatched, most likely as a result of hasty second-unit shooting. One moment, Steve McQueen’s character is in a theater appealing to his friends for help with a desperate blob hunt, only to be seen a second later in a reverse shot that has him standing against the kind of pitch-black backdrop that was once used for those tedious picture days once held in school gymnasiums. And this image, of characters positioned in an obviously controlled environment that fails to bear the slightest resemblance to where they’re supposed to be, appears throughout the film again and again.

That displacement works in The Blob’s favor. These technically incorrect shots are often the eeriest in the film, and they also bolster the theme, commonplace of alien-invasion films mostly made during the second Red Scare, of outsiders attempting to convince authority figures of an insidious invader. In an essay included with this Blu-ray, critic Kim Newman even celebrates The Blob for featuring rebellious teens as heroes in a film climate that often looked to the wisdom of stodgy elders (who, at times, provoked the invader in the first place) for salvation.

The heroes may be teenagers, but The Blob, though generally a goofy and enjoyable B-programmer ideal for watching while loaded in the middle of the night, is still one of the most pointedly reactionary of the 1950s’ alien-invasion movies. The plot features rebellious folks who wouldn’t even make the irrepressibly cheery mannequins of Happy Days blush, as these “kids,” who all look about 30, apparently roam town in the middle of the night without entertaining so much as a passing interest in booze or harder drugs, and sitting close to a girl or guy at a horror movie represents the apex of their naughtiest inclinations toward the opposite sex (never mind homosexuality, which doesn’t exist in this film). These rebels could comfortably blend in with their parents at a church fundraiser at a second’s notice.

Unlike a number of conflicted, unsettling alien-invasion films of the era, such as Invasion of the Body Snatchers and Invaders from Mars, The Blob ultimately offers a reassuring fantasy. The adults of the film eventually discover that the kids are all right (i.e. obedient), and that the source of their society’s disruption can be conveniently whisked away to the Arctic for permanent deep-freezing. It’s telling that the alien could almost be removed from The Blob entirely without altering much of the film, as this is a youth hang-out movie first and foremost, only with all potentials for chaos and anarchy comfortably scrubbed away.

This transfer emphasizes that The Blob, though often formally inconsistent, also offers a feast of colors that’s surprisingly stunning consider its low-budget roots. The film, appropriately, often resembles a cartoon: The red and blues, particularly of the cars, pop with a surreal brilliance that’s sometimes reminiscent of Frank Tashlin’s films. The sound mix is impressively clear, precise, and almost entirely scrubbed of the sort of white noise that can often interfere with the intended aural effects. A gorgeous presentation.

The two audio commentaries are enjoyable but redundant of one another, unless you’re a Blob fanatic determined to sort out the subtly differing points of view that producer Jack H. Harris, film historian Bruce Eder, director Irvin S. Yeaworth Jr., and actor Robert Fields collectively offer regarding the same, and mostly traditional, making-of anecdotes. There are some interesting stories pertaining to the realization of the creature though, such as the crew’s use of a balloon to create the effect of the blob’s emergence from a meteor. The “Blobabilia!” photo gallery also offers a few photos highlighting the challenges the filmmakers faced in realizing the titular critter on a low budget, but it’s also otherwise forgettable. Kim Newman’s essay, which contextualizes The Blob in relation to other alien-invasion films of the time (including the aforementioned Invaders from Mars) is easily the best supplement. Rounding out the package is the film’s theatrical trailer.

The extras are slight, but America’s favorite man-eating globe of gelatin has never looked better.