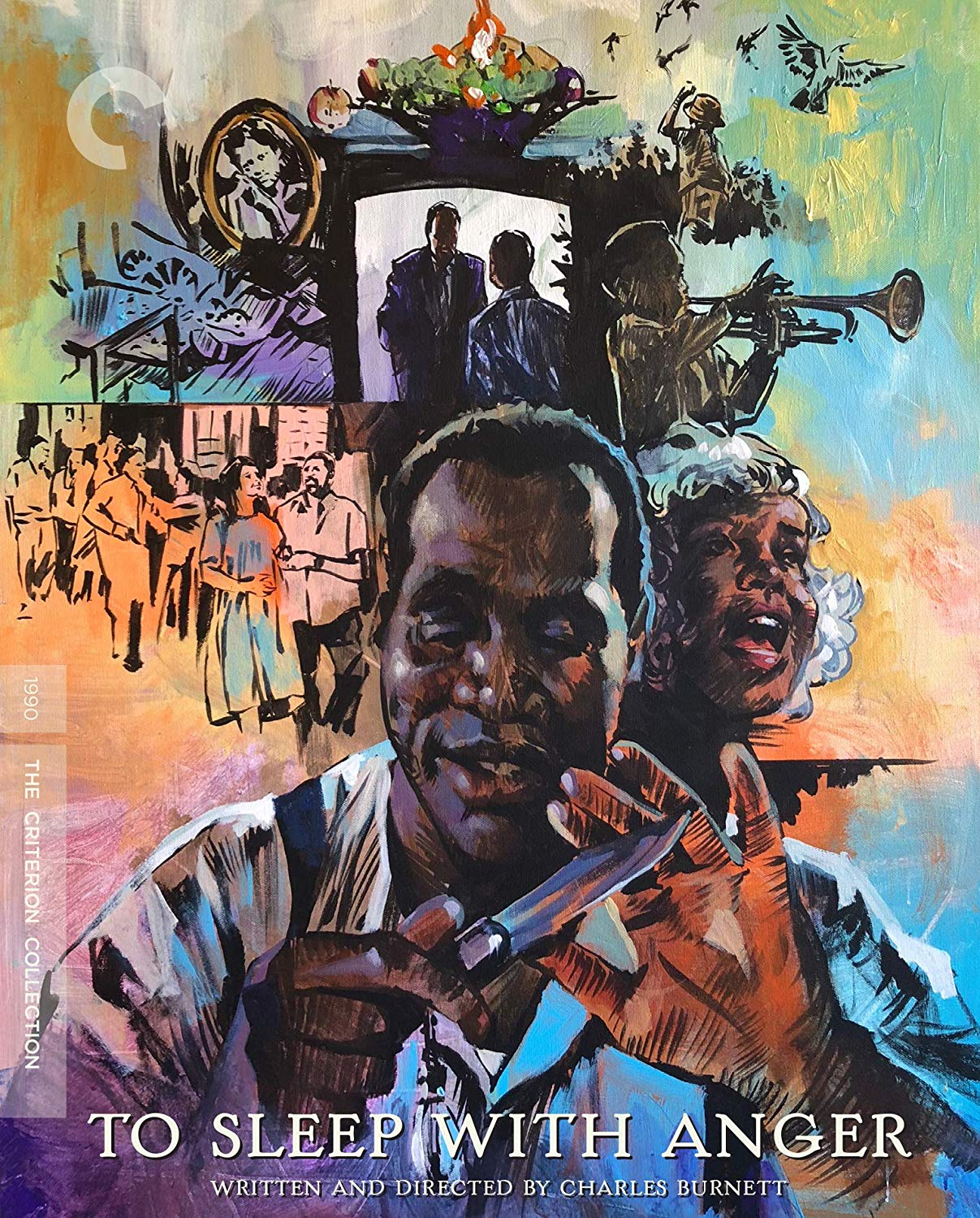 Charles Burnett has an extraordinary gift for fashioning symbolism that enriches his themes while appearing spontaneously “found,” giving his work a distinctive magical quality that feels controlled yet shaggy and playful. In his fictional features, as well as his documentaries and shorts, he captures quotidian textures that enhance the overall arc of his films, while honoring the singular mystery of each individual detail, acknowledging its right to exist apart from a grand plan. It’s a delicate aesthetic tightrope to walk, capable of collapsing into solipsistic preciousness, yet Burnett manages it time and again, forging an art of beautiful fragility.

To Sleep with Anger opens on an aging African-American man, Gideon (Paul Butler), sitting upright in a wooden chair, formally facing us in a sharp silver-tinged suit. Sister Rosetta Tharpe’s cover of “Precious Memories” plays on the soundtrack, lending the scene a gentle and languorous atmosphere of regret that complements the irritated look on Gideon’s face. The camera moves over Gideon toward the right near the wall behind him to reveal an old portrait of an elderly African-American woman. (By film’s end, one may assume this is a picture of Big Mama, who’s referenced only a few fleeting times in the dialogue, but whose absence casts a pall over the narrative.) And as the camera tilts below the picture, it stops at a table with a bowl of fruit on it, including an apple cut in half, browning a bit in the center.

Retrospectively, this may strike some viewers as significant symbolism, rhyming with Burnett’s most ostentatious flourish: The fruit irrationally catches fire, and so do Gideon’s feet. This image fades into another of Gideon’s feet, now bare, as he sits on a tree stump in his garden, seemingly awakening from a dream. This is yet another moment that gains stature on the rebound: Has Gideon just awoken from a prophecy of what’s about to happen to him and his family, who’re put through an ordeal that offers them a catharsis from reenacting the resentments carried over from prior generations? In roughly three minutes, from the opening credits to this first post-credits scene, Burnett has entirely established the film’s emotional and thematic logic, with a mathematical precision that also allows for mystery and nuance.

Burnett sketches the details of the lives of Gideon and his family, stitching together theatrical dialogue, portentous omens, and presentational acting with a grace that’s so masterful as to appear effortless. A boy practices his trumpet next door to Gideon’s home, blowing awkwardly and irritating everyone in his periphery, including other boys who ridicule his struggles. Pigeons fly into the sky in rapturous slow motion. Gideon argues with his wife, Suzie (Mary Alice), about one of their sons. By the time that Harry (Danny Glover) arrives at Gideon and Suzie’s doorstep, Burnett has carefully established this family as a group of decent yet uncertain people who’re haunted by the legacy of American slavery.

To Sleep with Anger refers many times to the notion of the “the right thing happening for the wrong reason,” and there are accompanying references to superstitions and tall tales linked to Gideon, Suzie, and Harry’s generation. This is what Harry represents: a force of wrong that eventually yields a right, exorcising Gideon’s family of a little of the tension of its legacy. As someone amusingly says, Harry prides himself on playing the “colored gentleman,” but he’s a self-absorbed flimflam man with suggestions of real danger. Harry slinks into Gideon and Suzie’s home in Los Angeles from the South, where they all once lived, rekindling old stories of brutal racial violence and gambling and carousing. Harry gradually usurps Gideon’s home out from under him, which Burnett charts with haunting specificity. When Harry eventually grows emboldened enough to lounge in the living room with his robe open, cutting his toenails on an old newspaper, the suggestion of intimacy, presumption, and smugness is obscene. (As Harry, Glover gives the performance of his career, offering an astonishing portrait of how passive aggression begets open aggression, though the rest of the cast is equally unforgettable, particularly Butler, Alice, and Richard Brooks.)

To Sleep with Anger is another neglected masterpiece of African-American cinema, along with Nothing But a Man, Ganja & Hess, Losing Ground, Daughters of the Dust, and others that have been restored and re-released in a limited handful of theaters over the last few years. The trend is encouraging, hopefully reflecting the rewriting of the canon of American cinema, highlighting a few of the voices that have been ignored so as to proffer an unrepresentative through line of white male actualization. This implication of estrangement and marginalization bleeds into To Sleep with Anger, though Burnett has the daring to end it on an overpoweringly hopeful note. That boy and his trumpet finally find unity, learning to sing.

This new and restored 4K digital transfer has an appropriately soft and impressionistic glow, with a decent amount of grain and a dense array of details. Various objects, which are important to the film’s narrative, are rendered with a sharp clarity that allows them to stand out from the pervading homey atmosphere (most memorably, and starkly, a knife that comes to figure in the third act). Skin tones are vibrant, and sunlight has a newfound sense of majesty. Meanwhile, the 2.0 surround DTS-HD offers a subtly immersive soundstage, plunging one into the multiple planes of noise and conversation that drive To Sleep with Anger forward while also grounding it in the lovely cacophony of everyday middle-class life.

“Of Family and Folklore” is a new interview program, recorded for the Criterion Collection in 2018, which features Charles Burnett, actors Danny Glover and Sheryl Lee Ralph, and associate producer Linda Koulisis. Burnett discusses the challenges of securing financing for To Sleep with Anger and maintaining the film’s elements of African-American folklore, which producers felt would baffle modern audiences. Helping matters was Glover, whose celebrity helped to get the production completed the way Burnett wanted. Glover and Ralph also speak warmly of Burnett and his method of trusting his wonderful cast, and their affection is quite poignant. Respect and admiration also animate “A Walk with Charles Burnett,” a new hour-long conversation between Burnett and filmmaker Robert Townsend. The men discuss the matter of race in the blossoming African-American cinema of the 1960s and ’70s, and how Burnett’s Los Angeles neighborhood inspired the imagery of Killer of Sheep and To Sleep with Anger, among others. This feature is somewhat repetitive, but Townsend is acutely aware of how Burnett fuses politics, personal longing, religion, and mysticism into a strikingly beautiful and revealing aesthetic. A short video tribute to Burnett produced for AMPAS’s Governors Awards ceremony in 2017 rounds out this slim but lovely package, along with a booklet featuring an essay by critic Ashley Clark.

Abbott Elementary Season Two Review: Still a Pleasure to Have in Class