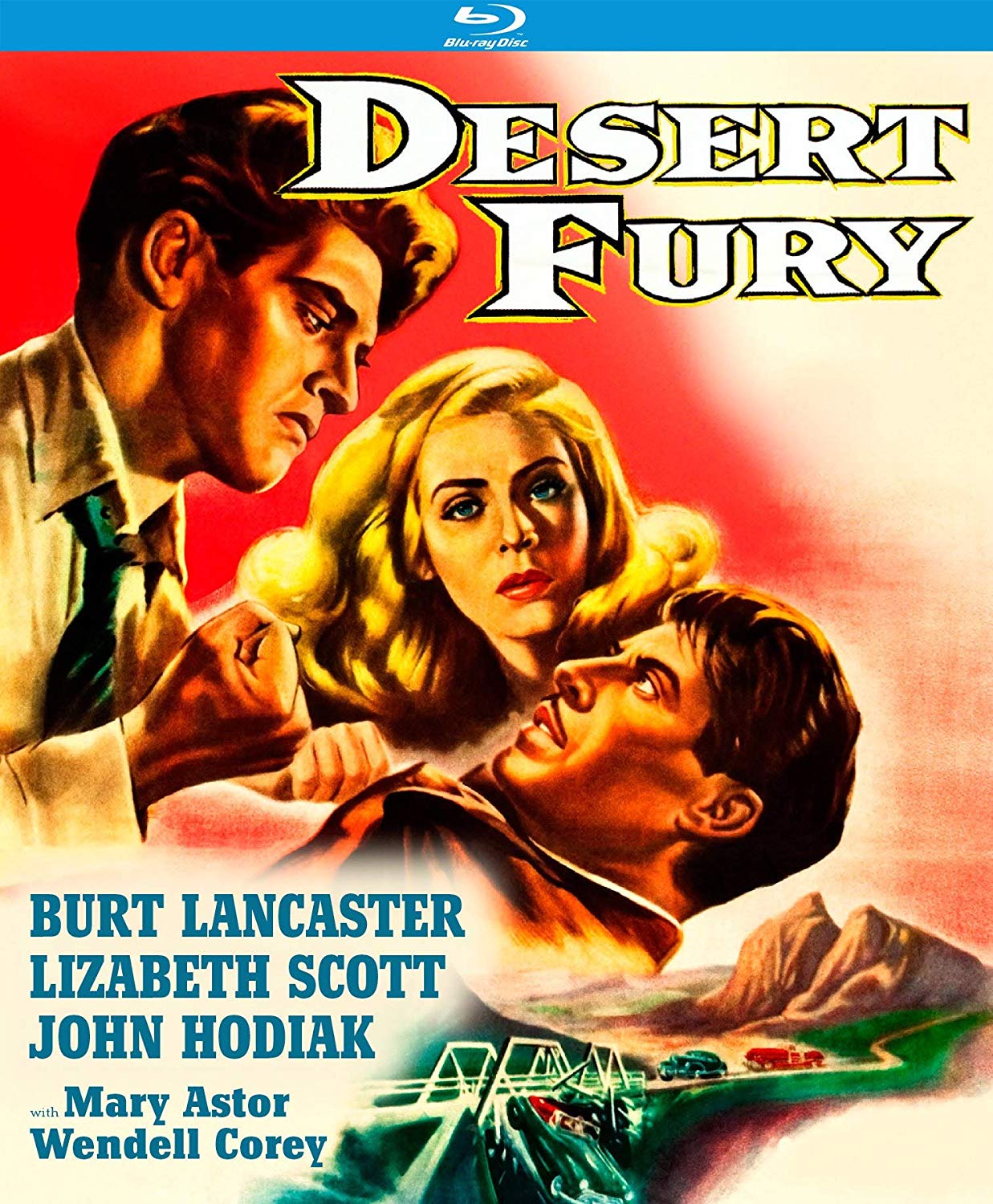 Lewis Allen’s Desert Fury suggests the eccentric love child of Jacques Tourneur’s Out of the Past and Douglas Sirk’s Written on the Wind. Melding the fatalistic impulses of film noir with the amplified emotions of melodrama and the end-of-the-line frontier landscapes of the western, this oft-campy, glossy Technicolor genre mashup is one of the more strange and subversive American films of the 1940s. And as noted by noir historian Eddie Muller says, it may just be “the gayest movie ever produced in Hollywood’s golden era.”

Desert Fury’s thinly veiled queerness first becomes apparent after two gangsters, Eddie (John Hodiak) and Johnny (Wendell Corey), arrive in a small town outside of Reno, where they try to weasel their way into the gambling racket run by Eddie’s ex-mistress, the powerful yet much-maligned Fritzi (Mary Astor). When Eddie takes a moment to stop at the bridge where his wife died a year earlier in a mysterious car accident, he meets 19-year-old ingenue Paula (Lizabeth Scott), immediately falling for her after she coos in his direction. But Johnny soon makes it clear that he doesn’t like sharing Eddie, telling Paula that he and Eddie have “been together a long time,” later describing how Eddie, some time back, picked him up at rock bottom, paid for his ham and eggs, and took him home. Johnny does all the cooking and cleaning now, waiting on Eddie hand and foot between racketeering gigs, and though one senses Johnny’s weariness at being made the third wheel yet again, he knows the women in Eddie’s life never stick around for long.

Things take a sharp turn from the homoerotic to the oddly perverse when we learn that not only is Paula the daughter of Fritzi, but that she also happens to be a dead ringer for Eddie’s deceased wife. And as if this love triangle between Eddie, Johnny, and Paula weren’t twisted enough, it’s further complicated by the extreme measures Fritzi takes to keep Eddie, the film’s homme fatale, and Paula apart. Fritzi’s contentiousness stems most obviously from her soreness at Eddie for running out on her all those years ago, but she exhibits an almost nefarious possessiveness of her daughter that vacillates uncomfortably between genuine maternal concern and borderline incestual yearning. The only remotely routine aspect of the film’s numerous love triangles, all of which overlap like a Venn diagram, and with Paula and Eddie at its center, is the town’s brawny deputy, Tom (Burt Lancaster), who’s in love with Paula and doesn’t take kindly to a two-bit criminal taking her away.

But Desert Fury is more than just a showcase for an array of fascinatingly offbeat psychosexual tensions with a healthy dose of soap-operatic face-slapping and a hyperreal color scheme reminiscent of no other Hollywood product of the ‘40s aside from the only color noir to precede it, John M. Stahl’s Leave Her to Heaven. Beneath these five characters’ yearnings for freedom and love is a wealth of emotions charged by the inescapability of their past adversities and mistakes. As these lost souls duke it out with one another in the name of love, revenge, or simply lust, they ping pong back and forth along an open stretch of road that connects the main part of town with the ranch where Eddie and Johnny are staying. The road—often an image of freedom in cinema, a potential route toward a new and better future—is here more like a vortex upon which everyone travels but ultimately goes nowhere.

At several points, the film’s main characters attempt to skip out of town on that very same strip of asphalt, but something always drags them right back to square one, and after a while their struggles take on a Sisyphean dimension. Their various crimes and sins, both prior and ongoing, become the tragic underpinnings which lead their quest for freedom to turn into a zero-sum game where love is balanced out by destruction. It comes as no surprise that Desert Fury ends at the same bridge where it opens with the past resurfacing with a final vengeance, repeating itself in horrific fashion. A tacked-on happy ending mutes the harrowing events that precede it, but even those who live to walk away safely are left with yet another albatross they’ll be forced to carry into a very uncertain future.

The image quality of Kino Lorber’s transfer is quite strong, albeit a tad inconsistent. While most scenes offer a well-balanced color palette and crisp, detailed picture, others look too soft and underexposed, losing detail particularly in exterior backgrounds. These hiccups, while distracting, are fortunately infrequent. The bulk of the film retains its unique late-‘40s Technicolor sheen, and there’s a particular vibrancy to the pastels of Edith Head’s typically stunning wardrobe. There’s also a healthy amount a grain throughout, giving the image a beautifully textured look that makes Charles Lang’s already eye-popping cinematography even more impressive. The two-channel audio track has a few hisses and pops early on but is primarily clean and evenly mixed the rest of the way.

Film critic and historian Imogen Sara Smith’s commentary track is wholly absorbing and essential for all fans of film noir in its various iterations. She effectively tackles Desert Fury’s flirtations with camp, as well as its subversive homoerotic and incestuous undertones and complex use of color. Smith provides ample historical context behind the film’s release, which came at a time when noir was branching out and incorporating various genres, and she meticulously details the film’s intriguing fusion of tropes and stylistic tics from noirs, westerns, and melodramas. In her discussion of the film’s numerous love triangles, Smith delves into the background of each of five main actors, discussing everything from their performance styles to their personal and professional struggles later in life. Her discussion of Mary Astor’s elation at getting such an atypical maternal role and charging it with a lesbian subtext, as well as the background provided about screenwriters Robert Rossen and an uncredited A.I. Bezzerides’s entanglement with HUAC, are a just couple of the standout segments in this wonderful commentary track.

Review: Charles Burnett’s To Sleep with Anger on Criterion Blu-ray

Review: My Name Is Julia Ross and So Dark the Night Join the Arrow Academy