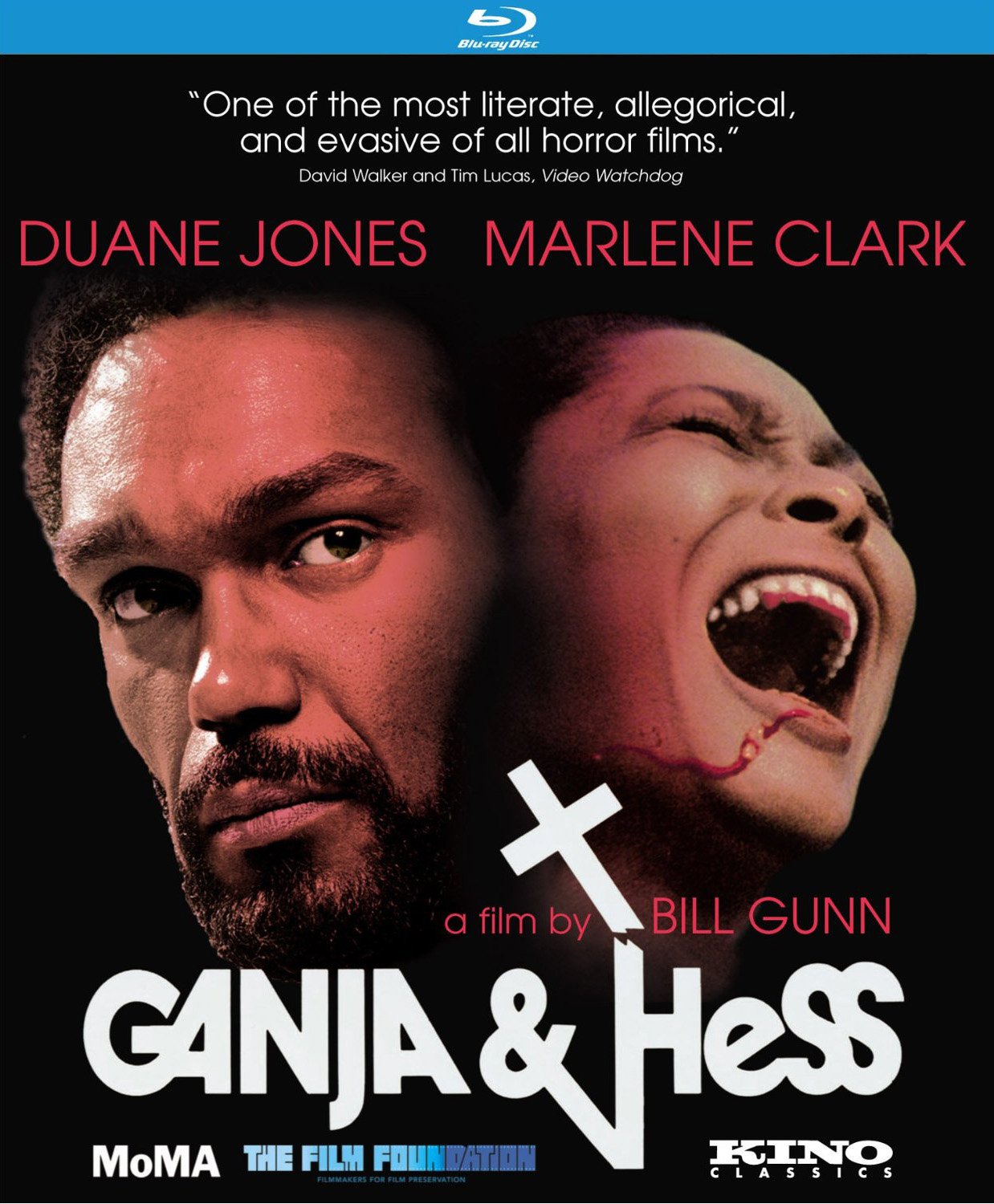 Playwright and actor Bill Gunn’s best-known work today is Ganja & Hess, which he wrote, directed, and acted in. Of the three films he made, it’s also the only one that acquired (and still possesses) any significant kind of circulation. Which is sad because, following a standing ovation at the Cannes Film Festival, it was taken out of his hands and recut, its running time reduced by almost 40 minutes, the ostensible justification for which was a lukewarm preview screening on New York’s Upper East Side. In the wake of the film’s mutilation, Ganja & Hess has taken on a quasi-mythic aura within the blaxploitation genre, partly due to its martyrdom as an artwork, but also because Gunn, who passed away in 1989, took his hired-gun assignment and turned it into something that was, to put it diplomatically, not on the program.

Ganja & Hess is both a highly personal reconstruction of the vampire myth (many cite it as the “anti-Blacula”), as well as a Godardian broadside, allowing us to imagine that Gunn was actually thumbing his nose at the way the industry was shaping up for African-American directors in the 1970s, thanks to movies like Gordon Parks’s Shaft. Blaxploitation, now responsible for whole forests’ worth of thesis papers, carries a dual appeal: movies that fall within the genre’s framework often have an insoluble blackness that white audiences can never completely absorb; on the other hand, paradoxically, that’s part of their appeal. Ganja & Hess, which has been retroactively, circumstantially cast as a berserk dash toward career suicide on Gunn’s part, is so singular, so opaque, that it doesn’t even have the draw of commerce-friendly exoticism. If Shaft is Barry White and Melvin Van Peebles’s Sweet Sweetback’s Baadasssss Song is the Sex Pistols, then Ganja & Hess is John Cage.

The setup is explained in the opening titles: Dr. Hess Green, doctor of both anthropology and geology, is stabbed three times by his crazed assistant. The dagger in question is an artifact from the ancient African culture that Dr. Green is studying. After he recovers from the attack, Dr. Green discovers that he’s been given eternal life (he cannot die or be killed), but at a cost: He needs to drink blood. A lot of blood. His assistant (Gunn), who previously disclosed his tendency to suicidal depression, kills himself with a revolver, and, not long after, the widow (Marlene Clark) comes calling, understandably less than satisfied with Dr. Green’s evasive answers to direct questions regarding her missing husband. The word “vampire” is never uttered, nor does Green undergo any kind of surface transformation. His vampirism, after a fashion, is a lot more like the DIY version developed by the title character in George A. Romero’s Martin than, say, “I vant to suck your blood” and the like.

That’s most of the plot, save for third-act revelations and resolutions that are easier seen than explained, but it’s only about 10% of what happens, or seems to happen. Gunn’s attitude toward the vampire story is hostile, bordering on contempt. You’ll be excused for finding Gunn’s skill as a director at times incompetent. But if the artist is often found in the crawlspace between a film’s concept and the material on the screen, Ganja & Hess—a trainwreck by traditional standards, maybe even an unlikable one—has a degree of furious strangeness that places it pretty far afield of the good-movie/bad-movie spectrum. It cannot be, and should not be, casually dismissed.

Put another way, when watching the film, you may experience a frenzy of parsing out what characteristics of the work are the consequence either of directorial intent (which is usually guesswork bordering on superstition, I know), technical failure, and/or incompetence, or material decay. Sometimes, such fault lines are hard to detect, or your instincts lead you up a blind alley. For example, the opening scenes are heavy with dialogue that’s clearly been recorded in the editing room, but what we hear rarely illuminates what we see, or matches the mouths of the actors, so that it frequently resembles some kind of avant-garde voiceover narration, transmitted via interdimensional radio. Gunn’s character is soft-spoken, polite, and inconsolably sad, to such an extent that his words are difficult to make out. By contrast, Duane Jones, best known for playing Ben in Night of the Living Dead, defines his performance (subdued, terse, very cool) almost exclusively by its contrast with Marlene Clark’s considerably more vibrant, actress-y presence.

It’s not that the film lacks for a consistent method in eliciting performances so much as it’s just not that kind of movie. Gunn’s cubist construction, mixing in scenes from a gospel performance, an African village (possibly depicting ancient times), and flooding the soundtrack with a vocalist who invokes parallels between Christianity and vampirism when he isn’t singing-explaining Dr. Green’s woes, results in a film that demand’s the viewer’s patient, moment-by-moment attention, even when it’s at its most off-putting.

As you can conclude from reading even a little about the film’s journey, time hasn’t been kind to Ganja & Hess, so when I say that Kino’s Blu-ray probably makes the movie look as good as it’s ever looked, at least since its warm reception at Cannes, you have to understand that it still looks and sounds pretty bad. This is partly due to technical deficiencies in the original production, but, since Kino’s materials have been assembled from a motley assortment of 35mm prints (the excised portions of the original negative now presumed to be lost), what we have here is a razor-sharp transfer of a tattered scarecrow. The color palette is, in the best scraps of footage, pale and dingy, and the soundtrack (more with the dialogue and effects than the music) is muffled and often incoherent. There’s even some hair in the gate toward the beginning, twitching away like in an old driver’s-ed film. Having said that, no blame to goes to Kino’s authoring, which does what it can.

The movies that are released on Kino’s label tend to fly solo. Ganja & Hess is an exception. It’s accompanied by a terrible featurette, “The Blood of the Thing,” which is nothing more than 29 minutes of blurry camcorder footage of talking heads in various settings (before a screening, after a screening, in an editing studio), telling the story of Gunn’s plight as they remembered or researched it. Pretty risible stuff. The audio commentary fares better: It features Clark, along with cinematographer James Hinton, and composer Sam Waymon.

This blaxploitation landmark ought to be rescued from its martyr status and appreciated anew as a totem of the unclassifiable in American cinema.

Review: Henry Levin’s Journey to the Center of the Earth on Twilight Time Blu-ray

DVD Review: Mario Monicelli’s The Organizer on the Criterion Collection