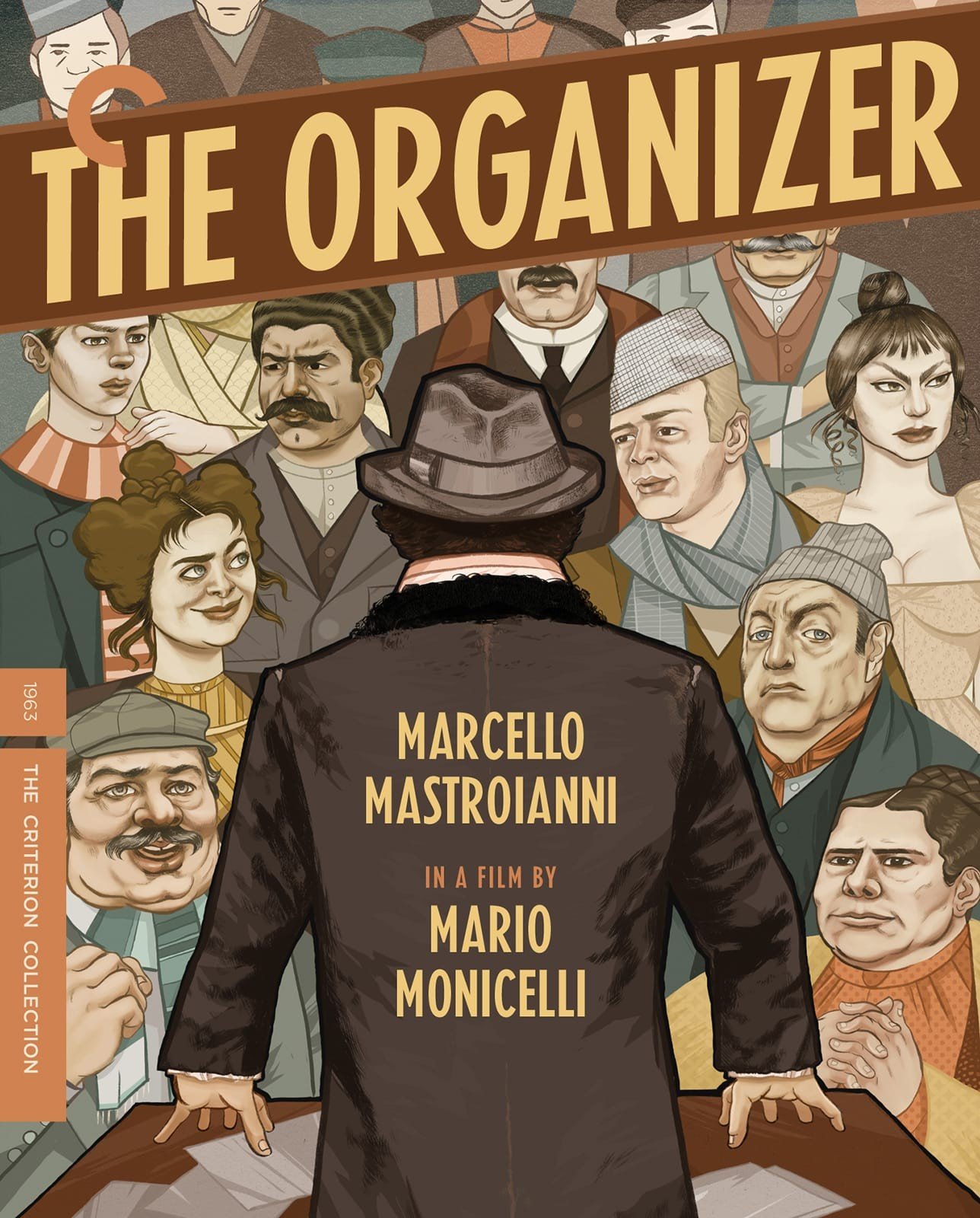 A tragicomic melodrama of early Italian unionism, The Organizer’s English-language moniker defers to the casting of superstar Marcello Mastroianni as Professor Sinigaglia, a dubious fugitive who becomes the de facto leader of striking Turin textile mill workers near the end of the 19th century, but director Mario Monicelli keeps his focus on the strikers as a collective hero, reflected in the original title, I Compagni, which translates to Comrades. Mastroianni, in a shabby coat and scarf and perpetually misplaced glasses, milks his deglamorized character and comic desperation (pouncing on a worker’s forgotten sandwich before yielding it to the owner with sheepish gallantry) for the kind of playing-against-type brownie points movie stars hunger for, but the star cannily dims his sizable aura until it fits the academician’s loss of status.

Monicelli and his collaborators keep the film in balance by immersing viewers in the life of the factory and its exhausted, endangered human fodder for 30 minutes before the indigent professor appears. An adolescent mill laborer and his younger brother rise before dawn and putter around their icy, bedsheet-divided single room, one for school and the other for a 14-hour workday; the urban chattel trudge to the cavernous, gated factory like the oppressed drones of Metropolis and Modern Times; and spurred into action by a machinist’s mangled hand, the proles hesitantly confront middle management (“We’re demonstrating, like the British”) before walking out under the tutelage of Sinigaglia. Literally awakened by a strategy meeting, the dissolute thinker advises them to walk out only after storing up provisions, “all on credit,” from the local shops.

Populated with easily registered archetypes like a macho lothario (Renato Salvatori) who’s the prof’s reluctant roommate and combatant for the bedclothes, a volcanic-tempered hulk (Folco Lulli) and his prostitute daughter (Annie Girardot), and a shakily committed sad sack (Bernard Blier), The Organizer builds its power through the humanity of its salt-of-the-earth laborers’ large emotions, common bonds, and the veracity of their physical environment, shot in stunning, smoky grays and blacks by cinematographer Giuseppe Rotunno, as a sort of flip side to his magisterial color work the same year in The Leopard. (Here the leader of the ruling classes isn’t a noble patriarch, but the factory owner, a cane-brandishing old scoundrel who assures his managers that he will destroy the strike by importing scabs from the south, before denying them dinner for improper dress.)

Monicelli, undoubtedly still best known for his 1958 heist farce Big Deal on Madonna Street, here doesn’t suppress his comedic instincts, but channels them into a teeming, boisterous symphony of nascent working-class self-assertion, most vividly in a 360-degree pan of mourners after a striker’s death, as the fiery populist song heard under the opening titles quietly surfaces on the soundtrack (“Tighten your belt!”). There are a few sentimental fillips, like Girardot’s working girl bonding with Sinigaglia (“I changed jobs,” he says, to which she replies, “So did I”) and a climactic tableau of innocence slain as the army is called in to stop a strikers’ occupation of the factory. The Organizer ends on a muted note of setback after the first volley of a long-term labor war, but Monicelli’s image of a woman struggling in long skirts over a railway fence to reach the male millworkers hurling coal from a freight car is emblematic of his epic regard for i compagni and their fierce resilience.

Giuseppe Rotunno’s daguerreotype-inspired cinematography is the beneficiary of a near-brilliant transfer, with his deep-focus perspective on the mammoth textile mill interior, the perpetual gray light of Turin’s sooty skies, and the smoke-and-mud ambience of cobblestone streets, laborers’ hovels, and a railyard’s chaotic brawl between strikers and scabs all rendered with extraordinary clarity and grit. The monaural sound is typically postdubbed but busy, vulgar, and sharp.

Aside from an American trailer, the disc’s lone supplement is an introduction taped by Mario Monicelli in 2006, four years before his death. He links it to other films of his in its core story of a group of underdogs who fail in “attempting something that’s too big for them,” and places it in the bitter and ironic tradition of commedia all’italiana. The booklet essay by J. Hoberman identifies The Organizer as “popular cinema in the best sense,” describes how U.S. critics found it a curiously anachronistic throwback to Depression cinema or Emile Zola, and calls Marcello Mastroianni’s greasy professor “a stunningly perverse embodiment of revolutionary hope.”

Review: Sergio Leone’s The Good, the Bad and the Ugly on Kino Lorber 4K