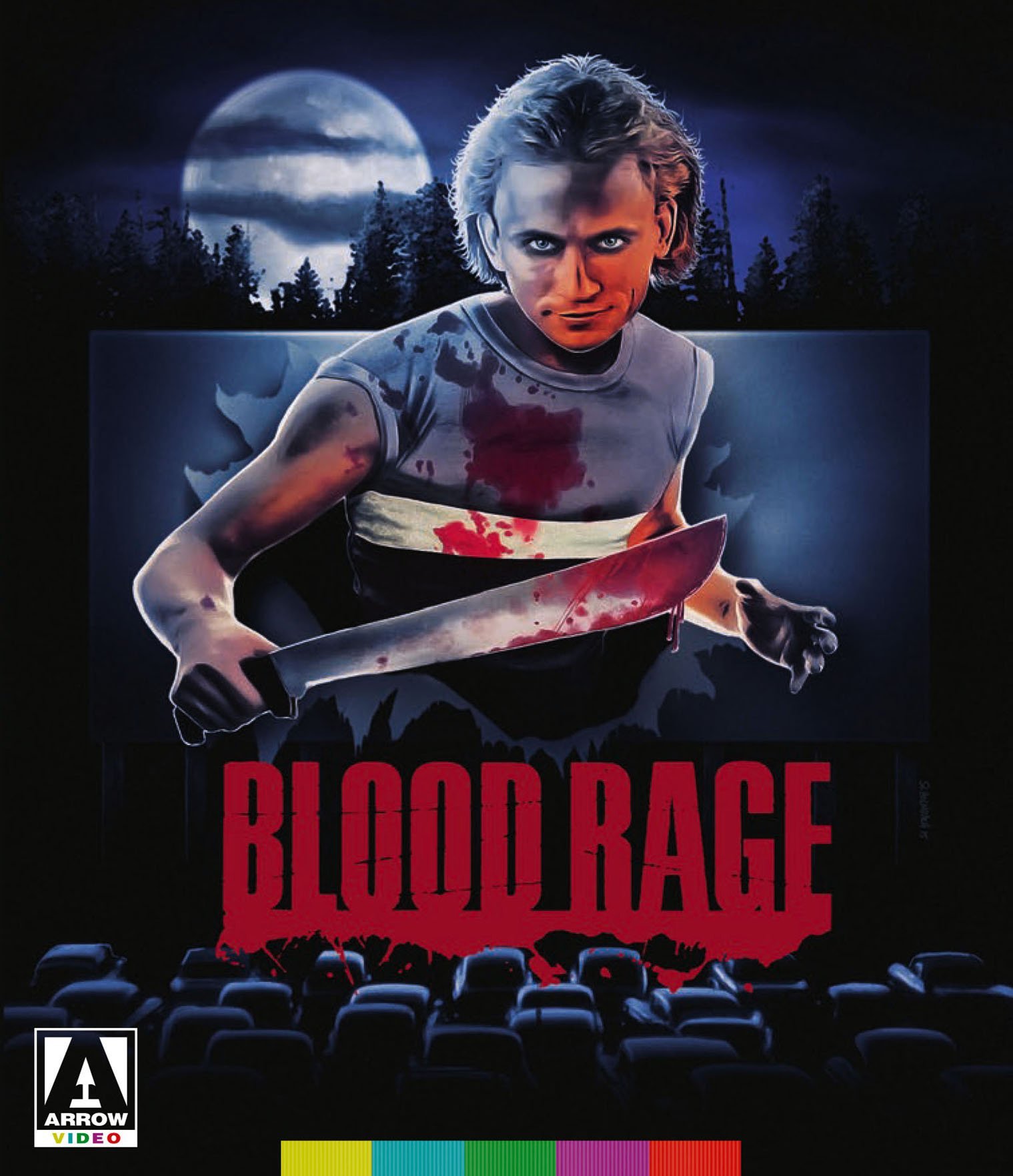 Funny, brutal, and featuring an above-average amount of T&A, Blood Rage epitomizes the slasher film’s sense of transgression, both in terms of bodily awareness and genre play. Director John Grissmer has a streetwise, reflexive sensibility. Opening at a drive-in theater during the 1970s, the film wastes little time on exposition as a pair of twins sneak away from their car while “Mom’s at it again,” as one of them puts it, to dig up a hatchet and hack away a man’s face a few cars over. Although the early bloodshed isn’t particularly innovative, a shot where a smattering of blood lands in a nearby bucket of popcorn suggests the slasher genre less as “trash,” as common parlance often deems it, and more as junk food, appealing to tastes for salty/sweet libations rather than functioning as sadistic arenas to purge one’s own hunger for real-life carnage.

The film is effectively Halloween meets Sleepaway Camp by way of Silent Night, Deadly Night, placing the murderous Todd (Mark Soper) into the care of Dr. Berman (Marianne Kanter), while Terry (Soper) lives with his mother, Maddy (Louise Lasser), and tries to repress the memory of his brother’s violent acts. Gender trouble abounds once lusty new neighbor Andrea (Lisa Randall) makes a pass at Terry and girl-next-door Karen (Julie Gordon) confronts her feelings for Terry while attending his family’s Thanksgiving celebration. When word gets out of Todd’s escape, dead bodies become as common as corn on the cob.

Blood Rage introduces numerous characters, but develops none of them, placing its lambs in a row for little more reason than the impending slaughter, but Grissmer adds a few bizarro flourishes and plays lines for the appropriate amount of camp, like the tautologically hilarious boast of self-confidence from Dr. Berman that “my past work with hysterical patients helped calm her down.” Yes, and Todd’s past ax-wielding appears to have prepped him well for a holiday rampage.

The film’s self-knowing oddity is detectable in close-ups that linger a bit too long on chubby faces of non-speaking bit players, where a goofy expression or overacting are relished rather than avoided. These are the kinds of moments and visual asynchronicities that Tim Heidecker and Eric Wareheim shape into meaningful form as outright comedy by emphasizing the underlying consumerist absurdity of infomercials and low-budget bids for commercial prestige.

Perhaps what makes Blood Rage better than comparable fare is its mix of Richard Einhorn’s affective, even haunting synth score and an obsessive interest in slasher set pieces, where violence and mayhem are not the causal result of a scene’s narrative action, but the very reason for its existence. By stripping away exposition, clothing, and flesh in equal measure, Grissmer attempts a feat of minimalist strength, as if seeking the gory core of the horror genre’s longstanding fascinations.

Or, perhaps, the film’s just interested in metatextual exploitation. Indeed, one could easily see Blood Rage as comparable to several late-‘50s noirs that rehearse that well-known template in search of a few winks and quick but short-lived financial success. But the film too knowingly navigates slasher tenets to be pegged as such, though it doesn’t radicalize them enough to become the genre’s Kiss Me Deadly. Instead, Blood Rage settles comfortably into being a film of loopy moments, like when Maddy, distraught about her son’s escape from a mental hospital, plops down on the floor in front of an open fridge to eat some leftovers. Aimless consumption defines character behavior, from indifferent hits of pot to shots of tequila to a character tasting blood and saying: “It’s not cranberry sauce.” Later, when Terry announces, “nobody should be outside with my brother around,” its silly level of would-be metaphor is matched only by a subsequent line, when a little girl shouts: “You’re gonna hurt my kitty!”

The era of the video store is gone, but Blood Rage should live on in themed cocktail parties and midnight screenings, if only for when Maddy tells Terry, “Let’s just pretend that nothing’s happened.” As a plea for the retained pleasures of video-store nostalgia, I’m all for it.

Given Blood Rage’s multiple versions and previous, hacked-up home-video formats, Arrow Video has done an outstanding job of restoring the film’s original, “hard” home-video version to its blood-splattered best. The 2K transfer is a stunner, with sharp and vibrant colors—especially those ever-present reds. There’s little evidence of digital enhancement or tampering, since grain remains present, while nearly all sign of rips, tears, or visible marks have been erased. All things considered, this restoration is close to essential and likely prevents the need for further revisions. Likewise, sound is crisp, clean, and resounds with Richard Einhorn’s synth score, which stands alongside some of John Carpenter’s best work for its indispensible presence and memorable stretches.

Arrow never skimps on supplements and this Blu-ray for Blood Rage is no exception. Nearly 50 minutes of interviews with cast and crew, including Louise Lasser and make-up effects specialist Ed French, run the gamut of production stories and anecdotal recollections. There’s even a brief interview with Ted Raimi, who reveals that his bit part as a condom salesman helped jump-start his floundering career as an actor. Otherwise, a feature-length commentary with director John Grissmer is nice, though he seems reticent to discuss the film in any long-winded manner, sometimes offering answers of only a few words or simply a mumble to the moderator. There’s also a featurette that revisits some of the film’s shooting locations in Jacksonville, Florida, and even a re-cut version of the film, titled Nightmare at Shadow Woods, that includes footage not seen in the original home-video release. Finally, some outtakes, alternate opening titles, and rare behind-the-scenes photos round out this impressive lot of extras.

Just in time for the holiday season, Arrow Video’s 2K Blu-ray of Blood Rage should be all the rage if you’re seeking an off-the-beaten-path offering.