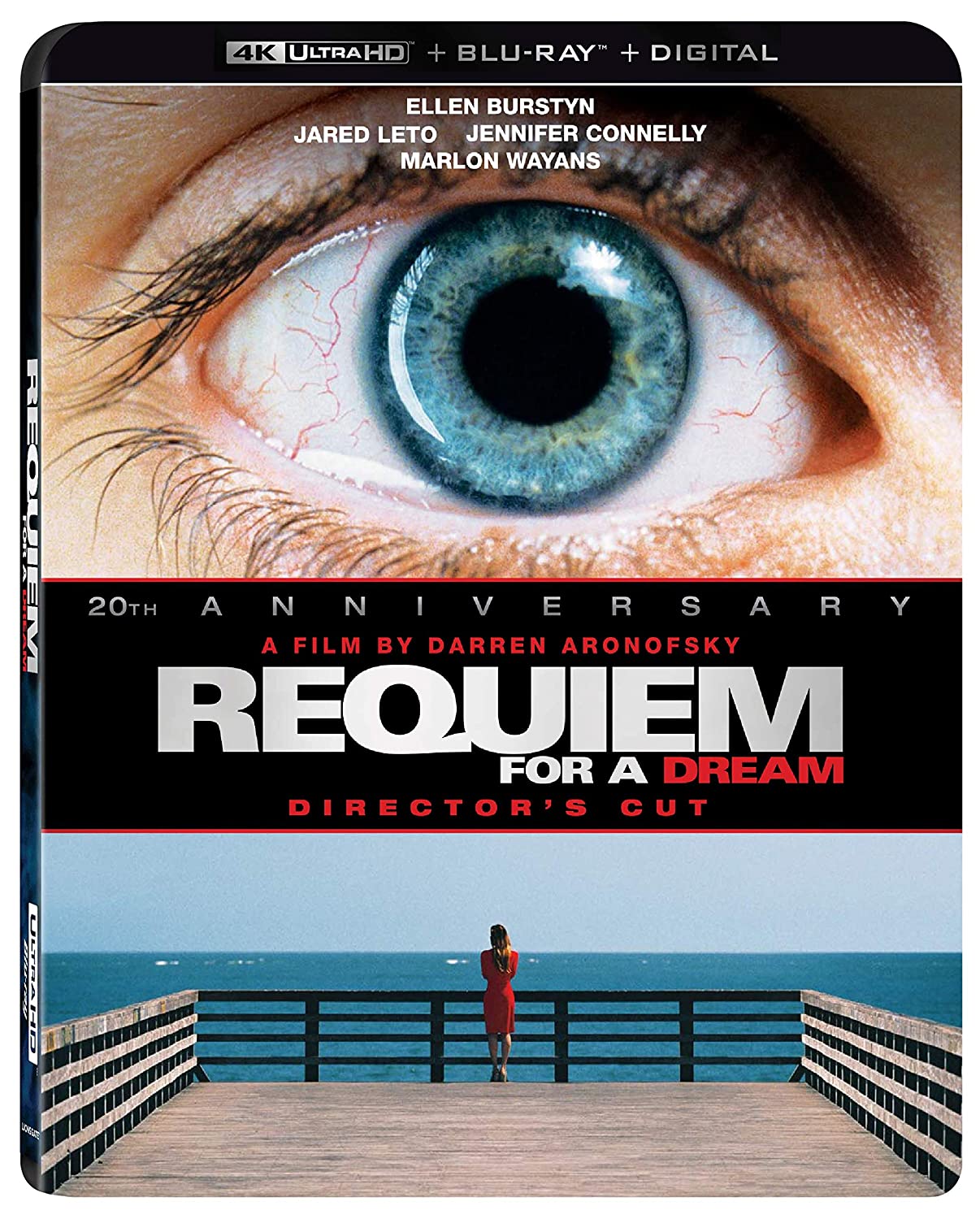 Most viewers feel that Darren Aronofsky’s Requiem for a Dream is either a gut-wrenching, formally adventurous masterpiece or an ugly, flashy piece of empty-headed propaganda. Thing is, both camps are sort of right. Aronofsky’s sophomore feature is undeniably accomplished, fully realized in its single-minded, fearless intensity, but it’s also, quite frankly, pretty melodramatic and dumb. Requiem for a Dream is an uncompromised, relentless descent into hell with just one thing on its mind: Drugs are really, really bad for you.

Requiem for a Dream is also the film that firmly established Aronofsky as a primarily visual filmmaker. His 1998 feature-length debut, Pi, was stylish but empty; later, he would elevate The Fountain’s philosophical hooey through sheer operatic force of will and The Wrestler’s solid but rote script through an expressive and soulful appropriation of the Dardenne brothers’ close-up tracking shots. If those later films are more successful than this one, it’s because their material could be elevated by style. In Requiem for a Dream, there’s nothing going on but style, and ultimately, that just isn’t enough.

For a while, though, it almost is. Requiem for a Dream’s first 30 minutes are some kind of tour de force, exploding out of the gate as the expression of a unique cinematic voice and introducing the stylistic techniques that structure the entirety of the film. Establishing Requiem for a Dream’s parallel editing schema, Aronofsky and editor Jay Rabinowitz cut between its central characters—Sara Goldfarb (Ellen Burstyn), her junkie son, Harry (Jared Leto), and Harry’s best buddy, Tyrone (Marlon Wayans), and girlfriend, Marion (Jennifer Connelly)—and their respective drugs of choice: heroin and ecstasy for Harry and Tyrone, heroin and cocaine for Marion, and sugar, television, and, eventually, amphetamines for Sara.

Utilizing an entire stable of visual tricks, from split-screens to slow- and fast-motion to rhythmically repeated inserts, these early moments are an exciting and purely cinematic experience. One scene, in which a moment of tenderness between Harry and Marion is presented through split-screened close-ups, may be the finest sequence of Aronofsky’s career, exquisitely expressing the characters’ intimacy as well as their fundamental distance.

Taking place over the course of one year, structured into four chapters tied to the seasons, the film starts bleakly and just gets bleaker, and as it progresses these stylistic decisions start to feel more and more oppressive. This is obviously by design, but there are only so many times you can show the effect of cocaine through fast motion or mental deterioration through fish-eye lenses before the techniques start to feel less expressive than lazy and obvious—crutches for a filmmaker who used up his entire bag of tricks in the first 30 minutes.

Narratively, as Requiem for a Dream spirals toward its nightmarish finale, things start to get so melodramatically awful for the characters that the film starts to seem like a modern-day equivalent to Reefer Madness, never so much as in the ugly way it introduces the character of a black drug dealer, Big Tim (Keith David), solely to exploit audience disgust at seeing a white woman taken advantage of by a black man. And no matter how relentlessly upsetting and effective Requiem for a Dream’s climax is—and it is effective, a self-contained masterpiece of aggressive cross-cutting and sound design—by that point it’s almost impossible to shake the image of Aronofsky as a gym coach hysterically lecturing his class on the dangers of drug use. Sorry, but this reviewer got enough of that in high school.

Lionsgate Home Entertainment’s 2009 Blu-ray release boasted a strong image and even stronger audio. Its only egregious flaw was the occasionally soft edge, which isn’t evident on either the Blu-ray or 4K Ultra HD disc included with this new release. The grain level is consistent and cinematic throughout, with the 4K exhibiting stronger color saturation and more accurate skin tones. The film’s relentless sound editing and Clint Mansell’s remarkable score is perfectly presented, never sacrificing the clarity of the dialogue.

The two commentary tracks, one featuring director Darren Aronofsky and the other cinematographer Matthew Libatique, have been ported over from the prior standard-definition and Blu-ray editions of Requiem for a Dream. Aronofsky’s remains the most engaging of the two, as its enriched by his recollections of growing up in Brooklyn, among other things, while Libatique’s is good listening for anyone fascinated by the film’s technical attributes. Four new special features are included on the 4K and all of them make clear that Requiem for a Dream would not have been possible without Pi. In a 16-minute conversation, Ellen Burstyn remembers watching Aronofsky’s debut feature and it convincing her that “he’s an artist” and how she carried her experience of playing Mary Tyrone in Long Day’s Journey into Night into her role here. Clint Mansell discusses moving to New York, meeting Aronofsky, working on Pi, and the genre influences and disparate sonic elements of his score for Requiem for a Dream. Elsewhere, Dr. Bruce Isaacs, author of The Art of Pure Cinema and Toward a New Film Aesthetic, lavishes coolly hyperbolic praise on the film’s style. The extras are rounded out by five minutes of behind-the-scenes footage.

On the occasion of its 20th anniversary, Darren Aronofsky’s influential hellride of a film gets a sturdy 4K upgrade and a few new extras that extol its technical merits.

Blu-ray Review: Stephen Frears’s The Hit on the Criterion Collection