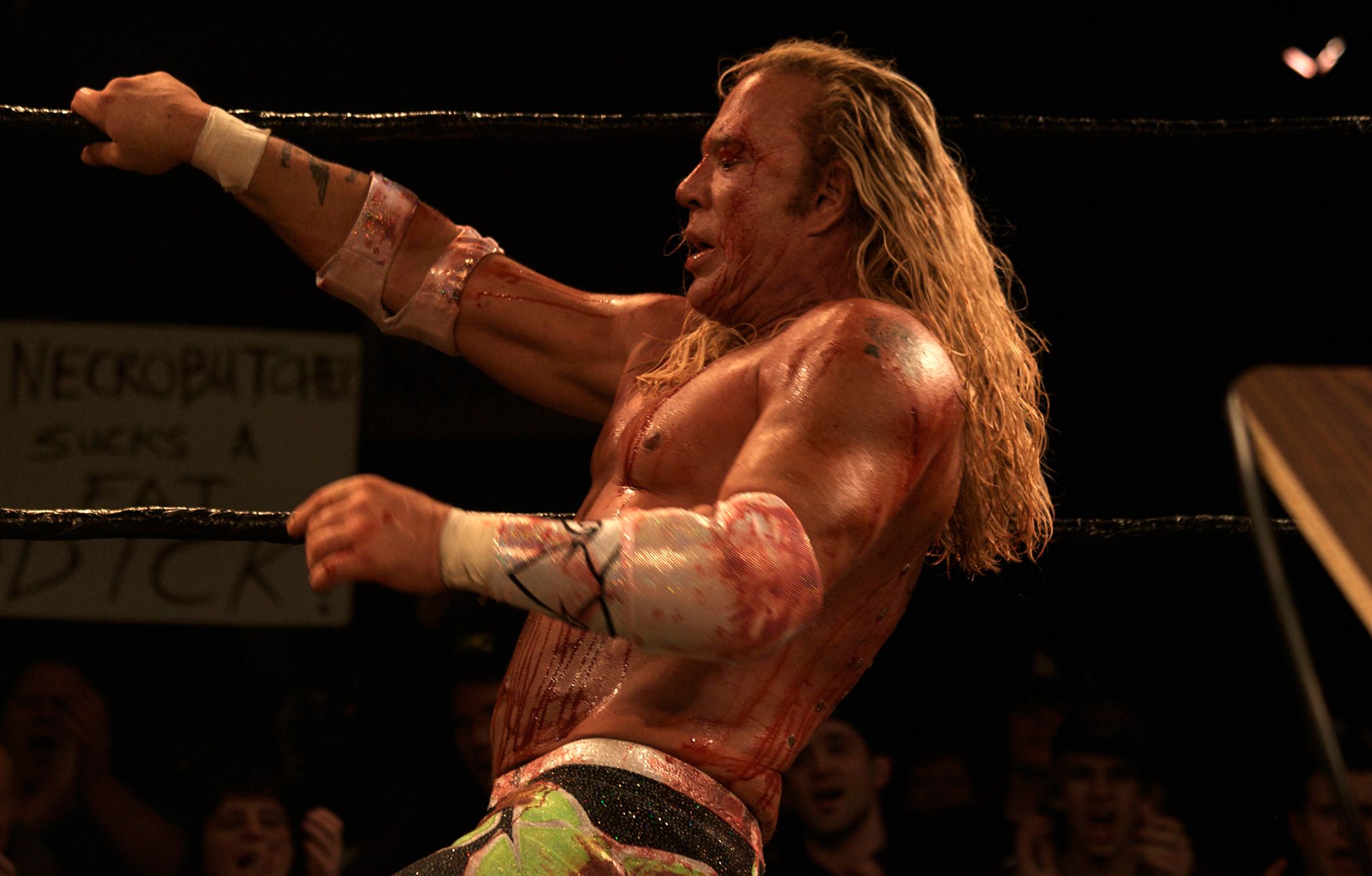 Annihilation and resurrection are the twin axes upon which The Wrestler turns, the former found in the bruised-and-battered pro wrestler at its center, and the latter in that role’s triumphant revitalization of Mickey Rourke’s long-tarnished career. Rourke is Randy “The Ram” Robinson, a golden-maned ‘80s hero of the squared circle who, 20 years removed from his halcyon days battling the evil Ayatollah in Madison Square Garden, has now gone to seed, struggling to earn enough cash on the local wrestling circuit to keep the manager of a trailer park from locking him out of mobile house and home. He’s an aged Rocky Balboa by way of Hulk Hogan, too old to grapple and also to change, and Darren Aronofsky’s follow-up to The Fountain proves, on a purely narrative level, something of a conventional you-can’t-teach-an-old-dog-new-tricks saga, charting Randy’s life on the margins with a raft of conventions and clichés common to that sports subgenre in which an ex-titan gives it one last go round. Yet if familiarity abounds, Aronofsky’s attention to detail, his potent evocation of milieu and character, nonetheless invigorates his straightforward material in a manner almost as quietly devastating as Rourke’s broken-down soulfulness—a raw mishmash of regret, guilt, shame and pride—as a gladiator determined to stay true, damn the consequences, to his brutal, injurious personal code.

In its intimate close-ups of flesh sliced by razors and pierced by glass, The Wrestler shrewdly politicizes Randy’s ripped (and ripped-apart) frame, an economic commodity which must by any means necessary—including those that are deleterious (pain killers, steroids)—be maintained. For Randy, upholding an outward appearance of superhuman health, strength, youth (via blond hair dye, or anabolic supplements) is paramount, even as such goals become, at his age, increasingly arduous, a tension reflected in his profession’s exaltation of both peerless, mammoth physiques and their systematic demolition. The drama Randy and his cohorts perform may be choreographed, but the film’s images of gashes being stitched, staples being removed from backs, and scar tissue pockmarking biceps acutely conveys the severe physical toll entailed by Randy’s tights-clad, supposedly “fake” theatrics. Here as in Requiem for a Dream and The Fountain, Aronofsky remains fascinated by humanity’s capacity for self-mutilation in the pursuit of a cherished dream. His close-proximity immersion into Randy’s in-ring violence and backstage recovery sessions—such as when medical treatment of his gruesome injuries instigates cross-cutting flashbacks to the brutal acts that produced them—results in gritty panoramas of corporeality damaged in the service of attaining stardom or, at least, base financial sustenance.

Working with cinematographer Maryse Alberti, Aronofsky shoots in grainy blacks and overcast tones, his run-down New Jersey locales mirroring (as do hair-metal cuts from Cinderella and RATT) the stuck-in-the-‘80s obsolescence and bone-deep sorrow of Randy and single-mother stripper Cassidy (a superb Marisa Tomei), a kindred past-her-prime spirit (and exploiter of body for profit) whom he fancies. Eschewing The Fountain’s hyper-stylized poeticisms, his direction exhibits an economic precision typified by Dardennes-ish tracking shots from behind Randy, a visual schema that suggests how the past (and the craving for audience attention, here embodied by us viewers) tenaciously follows him. Moreover, Aronofsky and screenwriter Robert Siegel pepper their film with casual, often bleakly amusing particulars that facilitate plausibility, from their depiction of dreary autograph-signing events, to the blasé use of insider terms (“heel,” “face”), to the revelation that Randy’s real name is Robin, a sly allusion to Hulk Hogan’s femme birth moniker Terry. With a sober humanism reminiscent of John Huston’s Fat City, The Wrestler poignantly submerges itself in the nooks and crannies of sports’ minor leagues, even as its traditional narrative arc—Randy risks life and limb for autumnal glory, woos Cassidy, and, in the film’s clunkiest subplot, reconnects with estranged daughter Stephanie (Evan Rachel Wood)—pushes slightly too hard with Christ-like undertones that imagine Randy sacrificing himself for our sinful entertainment.

Randy’s is an existential quest for self-definition sought through the pain of a folding chair to the forehead, and Rourke—whose own fall from ‘80s grace included a professional boxing stint and significant reconstructive surgery—doesn’t so much portray his protagonist as dredge him up from deep within his weathered-granite torso. His mug seemingly chiseled with a jackhammer, Rourke communicates, through guttural intensity streaked with remorse, the physical and spiritual weight of dashed hopes and predetermined doom. Omnipresent is the sense that wrestling is all Randy knows, and yet a vocation that will inevitably reward his devotion with disability—making him victim to the same canes, wheelchairs and colostomy bags spied on former comrades—and, afterward, death. As in the rebellious disgust that contorts Cassidy’s face during a mesmerizing final pole-dance routine, there’s defiant sadness in the lines of Rourke’s gnarled visage, and aching weariness in both his shaky movements outside of the ring and labored (if still sufficiently agile) efforts within. Eventually hampered by a traitorous ticker that relegates him to humble supermarket deli counter duty, Randy ultimately refuses to betray himself, and it’s there, in Randy’s resigned understanding and acceptance that a life predicated on self-destruction can only end one way, that The Wrestler ultimately locates its measure of graceful nobility.