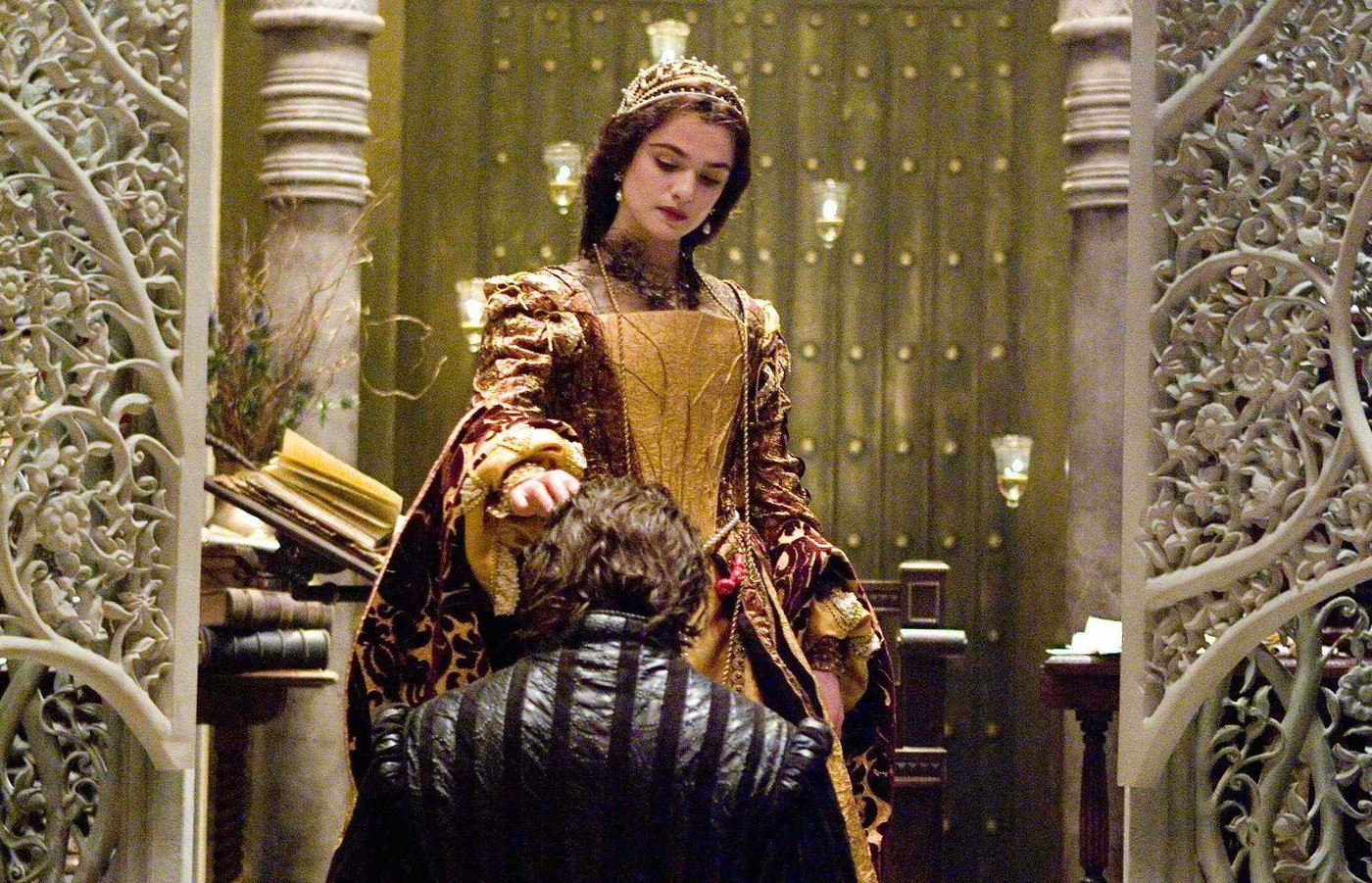 As early festival rumblings suggested and the final product confirms, you’re either with The Fountain or you’re against it. Darren Aronofsky’s sci-fi saga spans eras, overflows with parallels, and drapes its central love affair in Judeo-Christian and Buddhist trappings, in the process risking embarrassment and incoherence by venturing way out onto a sincerely poignant, heart-on-its-sleeve limb. In its own sappy way as daring and gonzo as Aronofsky’s hyper-stylized trip down heroin lane, Requiem for a Dream, the director’s latest arrives after six years of well-documented production turmoil, its original big-budgeted incarnation shelved after the departure of original stars Brad Pitt and Cate Blanchett, and its finished form a more constrained creation in which microscopic close-ups of organic particles stand-in for CG effects, tight framing masks the limited scale of ornate sets, and a compact running time moderately truncates (to its minor detriment) two of its three analogous storylines. The film’s literal size, however, doesn’t correspond to its scope, as Aronofsky’s vision is nothing shy of epic, striving for a timeless purity of feeling—with regard to both the heart and the flesh—via a brazenly fanciful tale that at times is contrived, uneven, and slightly absurd. It’s a search for genuine sentiment in out-there operatic fantasy, the kind of earnestly romantic-philosophical endeavor that dares to be silly in the greater service of emotional truth.

And silly it sometimes is. As written by Aronofsky (from an idea co-conceived with Ari Handel), The Fountain self-consciously cuts back and forth between three intertwined narratives, its repetition of lines, motifs, and camera movements—as well as its stunningly ethereal, painterly images of outer space’s webby gaseous clouds—making clear its prevailing belief in interconnectedness. In the present, scientist Thomas (Hugh Jackman) valiantly searches for a cure for wife Izzi’s (Rachel Weisz) terminal brain tumor, his risky research on a monkey with the aide of a South American tree-based compound coming at the expense of spending time with his fading love. Meanwhile, in 16th-century Spain during the Inquisition, conquistador Tomas (also Jackman) is sent by Queen Isabel (also Weisz) in search of a hidden Mayan temple that guards the Garden of Eden’s legendary Fountain of Youth, a.k.a. the Tree of Life—a segment later revealed to be the crux of Izzi’s uncompleted novel. And in the far-distant future, bald, despondent Tom (Jackman, again) weeps and meditates in the lotus position while flying through the cosmos in a translucent, snow globe-ish bubble that houses the now-perishing Tree (from which Tom eats), his final destination being a dying star named Xibalba that the Mayans believed was the gateway to the underworld and rebirth. Seriously.

The Fountain certainly doesn’t lack for ambition, a fact that frequently gets it into trouble but which also, ultimately, stands as its most endearing quality. The film’s trippy melodrama is, at its core, an intensely grandiose and sincere rumination on the nature of love as the universe’s only eternal element, as well as a poignant portrait of the inherent cyclicality of existence. “Death, as an act of creation,” muses Izzi to Thomas, an outlook that typifies Aronofsky’s conviction about reincarnation and is embodied by a powerful (if somewhat cheesily executed) climactic conception of everlasting youth as bodily disintegration and symbiosis with Mother Earth. That she’s prone to such pronouncements is indicative of the film’s placement of theme and mood ahead of character and plot development, as modern Izzi is a symbol of noble, revered femininity rather than a fully formulated human being. Likewise, the past and future segments prove to be vehicles for Aronofsky’s quasi-religious musings instead of equally realized counterparts to the 2006 action. It also doesn’t help that unnecessary exposition sporadically threatens to literalize the story—when Thomas tells his colleague/professional den mother Lillian (Ellen Burstyn) “Death is a disease…and there is a cure,” it’s as if The Fountain doesn’t quite trust its audience to glean its overriding concerns from the drama at hand.

And yet if one’s capable of overlooking these deficiencies, the audaciousness with which Aronofsky proceeds is invigorating, just as his marriage of aesthetic and thematic concerns is subtly spellbinding. As opposed to Steven Soderbergh’s similarly dreamy but chilly Solaris, The Fountain is positively aflame with sentimentality, its thin scripting bolstered by the director’s tender depiction of Tom’s painful memories—highlighted by an entrancing first-person view of Izzi playfully running away from him, as well as another shot that captures the unparalleled beauty of a slumbering lover’s back—and Clint Mansell’s elegiac score, whose sparse theme brings a yearning, desperate mournfulness to even the corniest of scenes. Such sincerity is matched by technical artistry at once flamboyantly rapturous (notably, the finale’s ecstatic, orgasmic vision of death-as-life) and meticulously arranged. Innumerable circular images—including, among others, wedding bands, tree ring-like arm tattoos, concentric floor designs, fiery Xibalba, and Tom’s rotating bubble—complement the film’s belief in spiritual/emotional perpetuity, while the director’s rigorous compositional use of hallways, doorways, and passageways speak to the constricting prevalence of humanity’s mortal coil and visualize the notion that man’s corporeal progression is a one-way journey that can’t be altered.

Consigned to a role that mostly requires her to look beatific (occasionally in heavenly white light, no less), Weisz competently personifies the angelic—if somewhat abstract—object of affection, ceding the brunt of the heavy lifting to her co-star. And in a triple-duty turn, Jackman finds himself with little to do but look hairy and gruff as a Spanish conquistador, and is handcuffed by the awkwardness of space explorer Tom, whose hairless head and flowing kung fu robes bring a measure of goofiness to the otherwise gorgeously shot future sequences. Nonetheless, as Thomas, Jackman’s grief-stricken devastation is palpable, the actor exuding a doleful honesty that transcends the proceedings’ intermittently overwrought histrionics. His guileless passion is in step with Aronofsky’s wealth of close-ups, which, as with those of Jackman’s whispering mouth on Weisz’s nape, or his fingers almost stroking the Tree of Life’s raised hair-coated bark, capture a tangible sense of physical and romantic intimacy. Whether the expressionistic grandeur of the film’s golden-hued cinematography and many graceful touches—such as its linking of burning stars with blazing lanterns and the firmament debris that rains around Tom’s intergalactic craft like tears—overshadows nuttier moments involving gooey tree sap and shrieking Mayan savages is the question liable to dominate discourse about the sure-to-polarize The Fountain. To these eyes, it does so strikingly, and definitively.

You Must Change Your Life: The Films of Roberto Rossellini & Ingrid Bergman