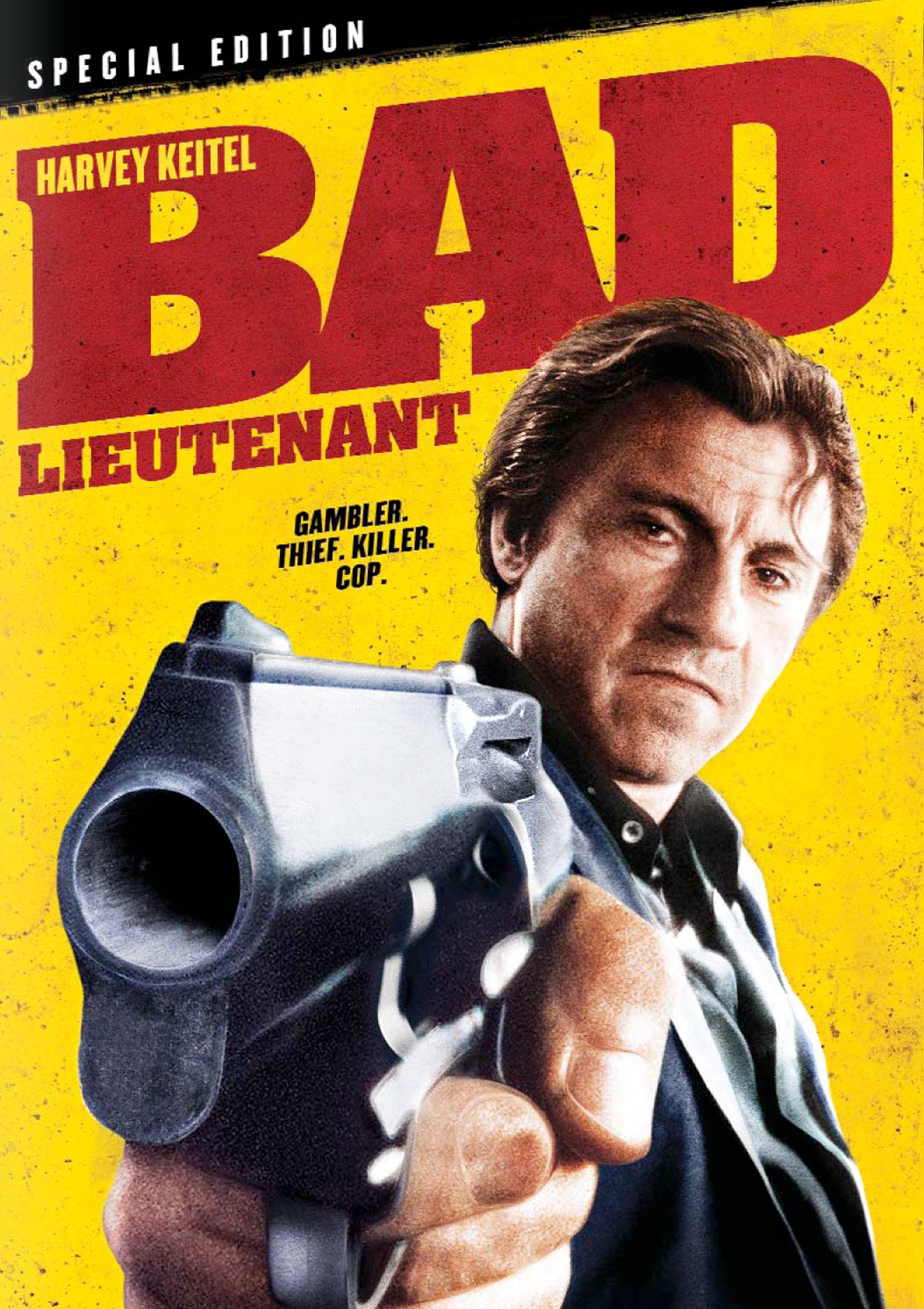 If I had to choose the most important films of the 1990s, within the top three would probably be Abel Ferrara’s Bad Lieutenant. Not since Martin Scorsese bared his faith in The Last Temptation of Christ did a film so aggressively contemplate the horror of grappling with body and soul. Shot in the raw, gritty style of the Italian neorealists, with a handheld camera roving the streets of New York City and film stock bubbling over with grit and grain, much of the film’s first half rubs our noses in the life of the title character (Harvey Keitel), and you’d be hard-pressed to find an individual laid more to self-indulgent waste. The lieutenant (we never learn his name) is first seen bellowing at his children while driving them to school, saying that if their auntie is taking too long in the fucking bathroom then they should call him over and he’ll throw her ass outta there, and after the children kiss him goodbye (his non-response to affection speaking volumes), he takes abundant snorts of cocaine while parked in the schoolyard, with rosary beads and a cross in the foreground dangling from the rearview mirror of his car.

That moment says everything you need to know about this guy, but Bad Lieutenant offers a series of incidents that not only present the lieutenant as a corrupt man, but perhaps the most depraved and lost anti-hero the mean streets have to offer. He steals drugs from crime scenes, willfully ignores a carjacking while buying a cup of coffee, uses a payphone to make outrageous, financially irresponsible gambling bets on the World Series, inhales vast amounts of cocaine and heroin with various somnambulistic junkies, and spends the night in a hotel with two skinny girls slow-dancing with him in a stumbling haze. Some of the more vivid images include the lieutenant’s hands being so shaky he can’t even pour whiskey into a glass, so he guzzles it straight from the bottle until it burns; then we see him wobbling in a doorway, fully naked, his arms outstretched in an attempt to find balance as he utters a soul-crushed, humiliated moan. It’s a fearless performance, but Keitel isn’t just showing his dick—he’s being frighteningly and vulnerably emotional. He’s completely unafraid to present himself as a broken man, and even his howls and shrieks feel like those of a helpless, pathetic child.

As an actor, Keitel seemed to have been on a kind of quest during the 1990s. At the end of the previous decade, he played Judas in Last Temptation of Christ as a blue-collar Brooklyn everyman, a guy who wanted so badly to understand the mysteries of God but, deep down in his heart, knew he was better at trusting his gut instincts and working with his hands. His performance as Judas contains that paradox, but this poetic struggle was also evident in Keitel’s work in Jane Campion’s The Piano, where he played a man without a country, and in Theo Angelopoulos’s Ulysses Gaze, where he played an American seeking authenticity in Greece and the Balkans—even during his final scene in Reservoir Dogs as he moans at the camera like a wounded animal after realizing an act of betrayal.

Here was an actor committed to his craft, and it’s touching to think he saw it in existential terms, believing that by embodying a series of meaningful roles about men digging into themselves for a kind of inner truth, he was able to get the audience (and maybe himself) closer to what it means to be human. Usually we speak of filmmakers like Ingmar Bergman as using films to express their inner souls, but Keitel achieved this through performance. His acting seems less like transforming into a character than exposing his very self. During this period, his interpretation of roles was akin to a messy autobiography. His scenes inside the church in Bad Lieutenant, for example, are frighteningly inarticulate, as his character sees a bloody vision of Jesus Christ and starts shouting, “Where were you, you rat fuck? Where were you? I’ve done so many bad things!” Self-loathing and rage lead to asking for forgiveness, and the whole moment is played out in almost a single shot. You don’t see any acting here; it’s as frank a portrayal of human crisis as I’ve ever seen. It’s so real, so truthful, you either believe Keitel is the greatest actor of his generation or that he was using this film as others have used a therapist’s couch: to vomit out his fears.

The lieutenant has this moment in church because, as we’ve seen, he’s an unhinged Catholic, something that bothers him in a very deep place underneath his drug abuse, gambling, sexual deviancy, power-tripping, and lawbreaking. His Catholicism is spelled out more in the handful of family scenes, where we see he has almost a half-dozen kids running around the house and multiple relatives living with him, including an old grandmother. There are multiple images of the cross in his nauseating daily life (even during a scene where he busts two girls for a broken taillight and masturbates on the side of their car while forcing one of them to imitate a blowjob, there’s a prominent crucifix in the left hand corner of the frame). When a nun is brutally raped on the altar, the case finds its way to the lieutenant, and it troubles him in ways he can’t understand. His first instinct is to avoid the problem, then when he can’t let it go he begs the nun to let him enact vigilante justice against her assailants, but she refuses, claiming she has forgiven them.

The concept of forgiveness, and the possibility of using this profound experience as an act of redemption for a destructive life, doesn’t come easily to the lieutenant. He has to fight with God, then during his moment of truth where he plunges into an abyss of salvation, he does so smoking crack and slapping the faces of those he means to forgive. In other words, yes, he’s crossed a threshold, but he’s doing so bitterly, confusedly, aggressively. Flanney O’Connor’s Wise Blood imagines Christ as a ragged, shadowy figure who moves from tree to tree in the back of one’s mind. Even as the lieutenant does an act of good, he can barely see it straight, comprehending more that it’s an act of sacrifice than generosity.

Ferrara was in the right place at the right time to make Bad Lieutenant. After Quentin Tarantino’s Reservoir Dogs gave Keitel some street cred in the independent film world and King of New York defined Ferrara as a visionary auteur combining art-house instincts with B-movie sleaze, the two of them found kindred spirits in each other. Their preoccupations were pushed to the limit in Bad Lieutenant, whose rough aesthetic is a combination of fly-on-the-wall documentary storytelling, locked down and flat presentational images inside real location apartments and stairwells, and lingering shots that take in a sense of locale or, more revealingly, of people. Training his camera on Keitel, who is in almost every single scene and shot of the movie, Bad Lieutenant wears on its sleeve that it will take us to the darkest nether-regions of the human heart. It is boldly NC-17, but unlike most exploitation cinema, Ferrara can’t seem to help himself from making the film a personal, frightened psychic diary, a pitiful shriek for help, and a powerful statement about how even the damned can achieve a moment of fleeting grace.

Always meant to be rough, the film’s image quality matches the raw aesthetic of a documentary. Certain scenes were shot in low light on high-speed film stock, and the grain is noticeable and prominent. That said, it’s difficult to imagine Bad Lieutenant any other way, and this DVD has cleaned up the image quality significantly, with vivid colors and clean skin tones. It’s less muddy than previous versions made available on DVD. Audio quality is consistently good and clear, with none of the pops or hisses prominent in low-budget indie films from the time.

Audio commentaries with Abel Ferrara tend to be fascinating because he’s so uninterested in dealing with the themes of his pictures, instead using the opportunity to bitch about money or point out the difficulties of making independent cinema (whenever you see a scene with extras, he’s always joking about how they look at the camera). That said, he clearly reveres Harvey Keitel’s work in Bad Lieutenant, and it’s good that he’s accompanied by director of photography Ken Kelsch, who not only outlines the technical aspects of the production but offers vivid descriptions of how a Ferrara set is run. During Keitel’s heavy scenes, Kelsch describes the primal Oedipal struggle the character is going through, and when he asks Ferrara to respond, the director takes a long pause, laughs, then says, “Yeah, I guess the character says he’s sorry.” And that’s as articulate as Ferrara is willing to get. But he’s never dull; he’s lively and funny and authentically New Yawk. A documentary gets into the pre-production, making-of, and distribution of Bad Lieutenant, all of which seemed to have worked out well for Ferrara. While it would have been nice to have had Keitel as one of the talking heads, several of the crew members are on hand as more than adequate substitutes, including a script supervisor who shares stories about the team stealing shots in various NYC locations and their five days in the Mayflower Hotel, where Keitel and two girls were allowed to do whatever they wanted, with all manner of sordid activities captured on film (less than two minutes of their work shows up on screen). There’s also a trailer opening with a quote from Paradise Lost and a burst of Schoolly D music that incorporated a Led Zeppelin guitar line, which was sadly (and noticeably) removed from the DVD release because of a lawsuit from Led Zeppelin. It was one of the defining tracks of the movie, adding to its aggressive tone like a hyperactive pulse. Ferrara reminds us of its absence by ironically humming the tune on his audio commentary.

One of the landmark independent films of the 1990s is given a first-rate, informative, and cleaned-up DVD. The film is a masterpiece, but not for the faint of heart.