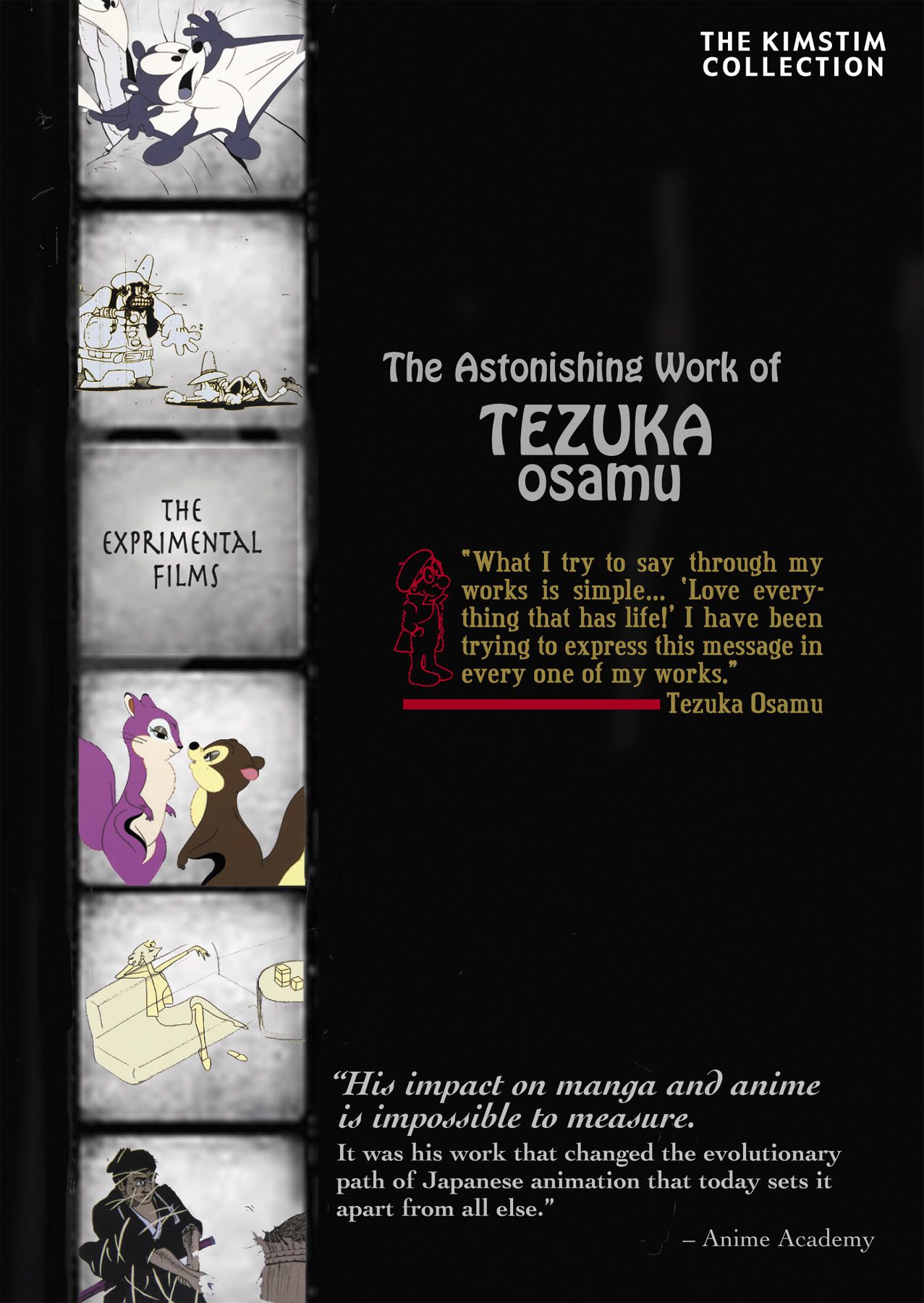 Despite his demigodliness within manga circles, Japanese graphic artist and animator Tezuka Osamu is largely unknown in the United States outside of his two cheapest and most benign creations: Kimba the White Lion, whose theme song no doubt still triggers heart palpitations in the chests of shifty-eyed Lion King producers, and Astro Boy. No one can be blamed for dismissing Osamu on the grounds of these corner-cutting television confections, particularly since only a meager sampling of his other work has been exposed to the West. Audiences raised, however, on either the premiere run of Kimba in the ‘50s or its subsequent syndication in each following decade may remember that the show supplied more mature impressions than the standard Saturday morning fare. In addition to ecological issues that Hanna-Barbara would have commissioned Dick Dastardly and Muttley to flatten with their colorful, CO2-belching jalopy, Osamu’s clever budget-controlling techniques could be downright poetic at times; in the example most hauntingly lucid in this critic’s memory, a nebulous blight upon Kimba’s forest was represented in one episode by an itinerant, demonic cloud that would divide aerial perspectives of the terrain with jagged, Saul Bass-like schisms. Osamu always seemed to have an edge that the stratified aesthetic of Kimba wasn’t fully satisfying.

Kino’s new DVD collection of the animator’s independent work is dubbed The Astonishing Work of Tezuka Osamu, and for those only familiar with Kimba’s pleasantly androgynous visage it’s not a frivolous title. Though the lion’s share of the films was produced for broad, cross-generational audiences, most also possess a menacing cynicism that would force Miyazaki to sprint to the SSRI cabinet. The eight-minute opus Mermaid, drawn in smooth stick-figure outlines against luminous watercolor backgrounds, opens in the typical epic fashion (a boy finds the titular creature one day while playfully swimming and falls in love), but it rapidly becomes a dour meditation on maturity and doubt when the boy’s incredulous parents force their dreaming progeny to undergo psychiatric consultation, experimental medication, and eventually shock therapy. This tragic reversal of preadolescent sexual expectation might be Osamu’s most noteworthy thematic fixation, and it supplies moments of startlingly genuine masculine insecurity; the animator even re-imagines the Adam and Eve story as a Jay Ward-esque romp with God creating the latter character first and then fashioning the former out of her bulging left tit (needless to say, it doesn’t work, and in a flurry of ironic sexism, the universe is destroyed so it can be rebuilt in the appropriate order). And in the most intimidating short (named, of course, Male), a horny cat lectures his owner about the foolishly counter-intuitive reproductive instincts of humans. That it ends with the owner viciously knifing his current sexual partner is both a manic tribute to and a subtly unflattering criticism of the perverted animalism of Tex Avery.

The list of precedents above is telling. Osamu’s one disadvantage in the animation canon is that he has no perceivable signature, favoring exaggerated derivations. Supposedly inspired to draw by Walt Disney’s feature films, the mark of the early cartoon studios is clear throughout his oeuvre; the half-hour long Legend of the Forest, which the liner notes declare as the set’s masterpiece, is a stunning pastiche of American animation trademarks tracing the steady development and eventual exploitation of a primeval woodland with Walter Lantz-like squirrels, anthropomorphic flora, and fauna recalling UB Iwerks, and a logger who appears to be the near cousin of Max Fleischer’s Bluto. Occasionally these respectful appropriations aren’t much more than the sum of their parts, but when Osamu’s seeming misanthropy is at the center he surprisingly manages to improve upon his forerunners. Another lengthy piece in the DVD collection, Pictures at an Exhibition, is more or less a playbook of Osamu’s biting satire and design ingenuity: The animator riffs on each of Mussorgsky’s portraits with merciless wit (“The Gnome,” a fitfully atonal piano composition, is illustrated as an impish, hypocritical journalist with freakishly long arms and a truncated body) and a diverse knowledge of pop culture (Jack Kerouac, Ernest Pintoff, and Al Hirschfeld are all slyly represented) while collaborator Isao Tomita provides bold, electronic interpretations of the orchestral movements.

And Osamu can easily be forgiven for aping his influences; after all, this is the man who essentially created the anime characteristics most recognizable today. Very few examples of this can be seen in the 13 pieces collected here, but certain motifs are striking: the size of both female eyes and chests, for example. Both the boobs and the irises have since further swelled, but it’s notable that in Osamu’s work they aren’t objectifying or titillating but threatening—expressive faces that stare down the male gaze while mammary glands below dare us to lust. It isn’t often that the progenitor of a style is also its most honest commentator.

These cartoons couldn’t look much better, despite coming from diverse sources of varying quality. There’s the expected film grain and some faded cels, but in general the telecine work appears faithfully restorative-those classically ‘60s primary colors bleed into one another with the finesse of a gouache-and the scores on the soundtrack make the most of the mono format. But while Kino once again proves its superiority in the international animation DVD market with the visual and aural clarity here (upconverters need not worry, as the transfer is artifact and combing-free), the subtitle errors are a trifle grating. Granted, there isn’t much dialogue that needs translating, but some of the subs appear as many as 30-40 seconds late. Some of the aspect ratios on the outer jacket are also mislabeled, though that isn’t likely to perturb many viewers.

Aside from a mildly fascinating interview with the director where he discusses the inspiration behind the included films and some production anecdotes, there aren’t any supplements. A brief booklet with a few essays or appreciations might have increased the value of the set.