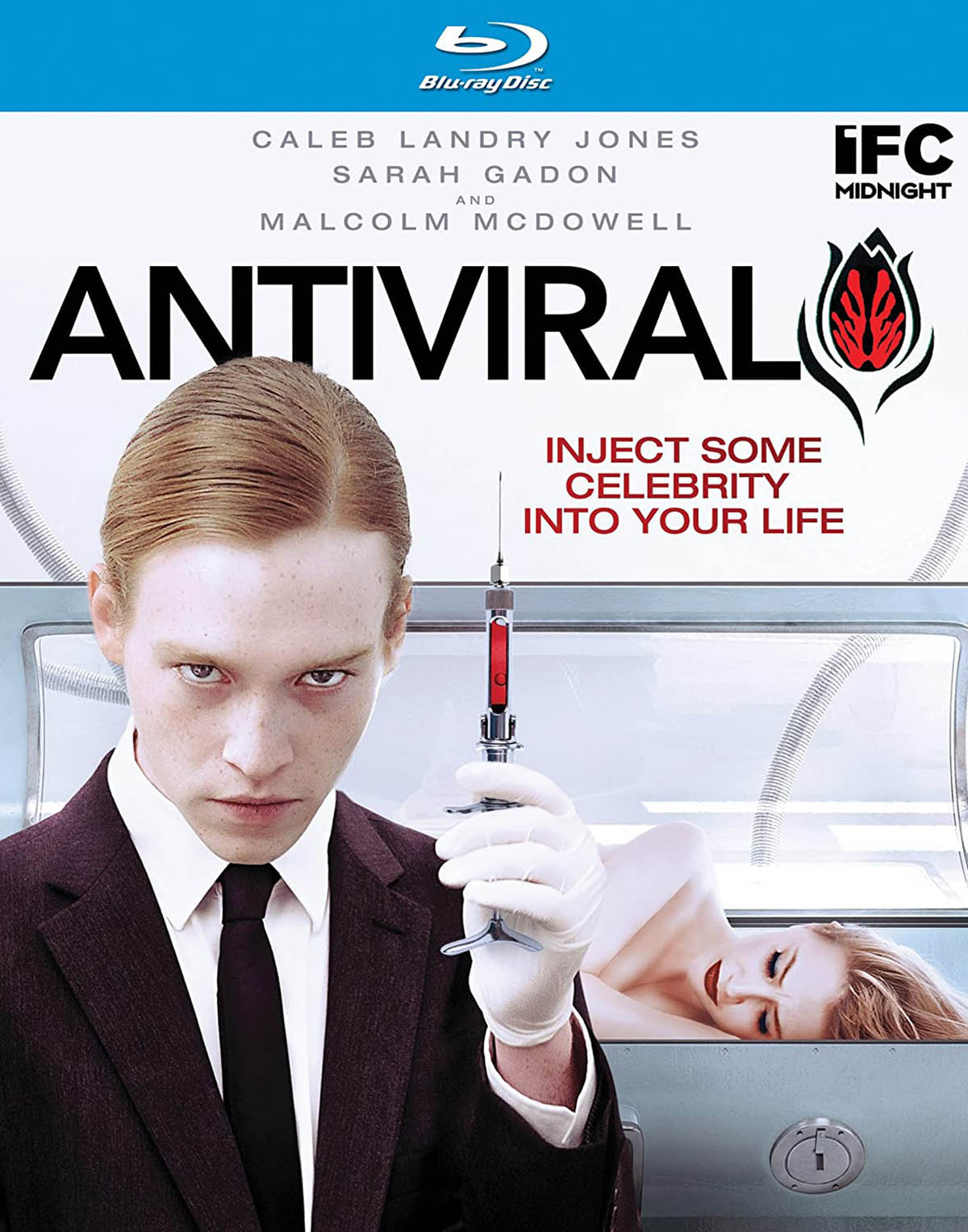 Brandon Cronenberg’s Antiviral extrapolates from contemporary trends in celebrity obsession in order to posit an alternate reality where fans can enter into carnal communion with their otherwise virtual idols by having themselves infected with their idols’ diseases at institutes like the Lucas Clinic. This is where we first observe Syd March (Caleb Landry Jones) at work pitching a prospective customer, Edward Porris (Douglas Smith), on the intimate benefits of the herpes simplex virus. Celebrity itself is treated like a contagion throughout the film, as fawning fanboys like Porris gain their own following based solely on sharing a disease profile with their chosen celeb, and admirers queue up at establishments like the Astral Bodies “meat shop” for steaks cultivated from cloned celebrity muscle cells. (This is, I would argue, an extremely literal take on the religious dimensions of the communion metaphor.) Arvid (Joe Pingue), owner of Astral Bodies, is a sleazy operator who traffics in black-market viruses that Syd has smuggled out of the Lucas Clinic. When one of the world’s biggest stars, Hannah Geist (Sarah Gadon), apparently dies after a protracted illness, Syd becomes the pawn of corporate interests competing for the lethal bug he’s purloined from his employers.

At bottom, Antiviral is clearly an espionage thriller, albeit one that doesn’t place too heavy an emphasis on the thrills necessitated by that generic tag. Because Cronenberg seems more interested in fleshing out his numerous ideas, many of which are reasonably intriguing, he fails to build much of a sense of forward momentum, and never generates any real aura of suspense. Even though the film was trimmed by nearly 10 minutes following its contentious Cannes premiere, it still suffers from serious pacing issues. More than anything, the problem resides with a redundant narrative structure that dawdles over tonally and anecdotally familiar material. Parallelism is one thing (used sparingly, it can be an effective storytelling device), but repetition for its own sake requires far more justification. And it never feels like that’s forthcoming here. Essentially, we get a slow burn that builds up to a glacially frigid conclusion, even if Antiviral’s final moments do arrive at a chillingly apt image of the celebrity-consumer as vampire. It doesn’t help matters that Cronenberg and DP Karim Hussain have cultivated an intentionally alienating aesthetic approach, employing relentlessly static framing and an antiseptic visual palette. After watching the film, you just might feel like you’ve been dipped in disinfectant and hung out to dry.

Simply because his last name happens to be Cronenberg, Brandon has some rather large shoes to fill. Probably the best way to deal with that sort of patrimony is not to think about it excessively. Granted, aspects of Antiviral owe an obvious debt to his father’s work. Whatever other touchstones one might invoke in a comparison between Brandon and David Cronenberg’s cinematic worlds, Antiviral comes closest to the elder Cronenberg’s gamer mindfuck eXistenZ. Both films feature rival corporations competing for control over their customers’ interface with what passes for reality. All the same, Brandon Cronenberg has his own set of personal preoccupations, his own rather peculiar sense of humor, and, for better or worse, his own distinctive visual style.

Brandon Cronenberg and DP Karim Hussain have worked out a rigorous (some might say alienating) visual scheme for Antiviral. The film unfolds as an interminable-seeming series of statically framed shots whose lulling effect is infrequently broken up by some fidgety handheld camerawork. The ascetic color palette hammers home its pervasive whites and occasional grace notes of warmer earth tones with an almost monomaniacal earnestness. Some aesthetic reservations notwithstanding, this 1080p/AVC-encoded Blu-ray transfer is impeccably detailed, sharply delineated, and really pops the whites in the film’s ubiquitous white-on-white compositions. When bold primary colors do occasionally make an appearance, especially those splashes and pools of profoundly crimson blood, they’re deeply and densely saturated. The disc offers two audio tracks: a Master Audio surround track as well as a lossless PCM two-channel mix. The surround mix gets a decent amount of usage out of its peripheral channels, capturing ambient effects and fully fleshing out E. C. Woodley’s portentously rumbling electronic score, which really punches up the proceedings whenever it kicks in.

The commentary track tends toward technical observations, with Cronenberg and Hussain obsessively detailing various choices in lens and lighting. Precious little is said about the genesis of the project beyond the fact that it began as a short film. Nor do the commentators attempt to explicate Antiviral’s rampant symbolism or the possible resonances of its themes. Doubtless owing to what Harold Bloom would call the anxiety of influence, Cronenberg barely mentions the film’s obvious connections to his father’s work; in fact, he hardly refers to the elder Cronenberg save in the most indirect fashion. Hussain does most of the heavy lifting here, while an initially reticent Cronenberg slowly warms to the discussion. As a result, the track is recommended mostly for those with an interest in the film’s calculated visual design and precise cinematography. The making-of documentary entitled “Anatomy of a Virus” fills in some of what’s missing in the commentary with talking-head discussions from cast and crew, interlarded with glimpses behind the scenes (notable is a rambunctious, even prankish Caleb Landry Jones). Five minutes’ worth of scenes, trimmed after the film’s Cannes premiere in an effort to correct pacing issues, are offered with optional commentary from Cronenberg and Hussain. There’s also an abbreviated “Behind the Scenes” EPK that rehashes the making-of documentary with material culled from the same footage, down to repeating some of same sound bites.

Brandon Cronenberg’s flawed but promising feature debut gets an almost immaculate Blu-ray transfer, as well as some solid supplements, from MPI Media Group.