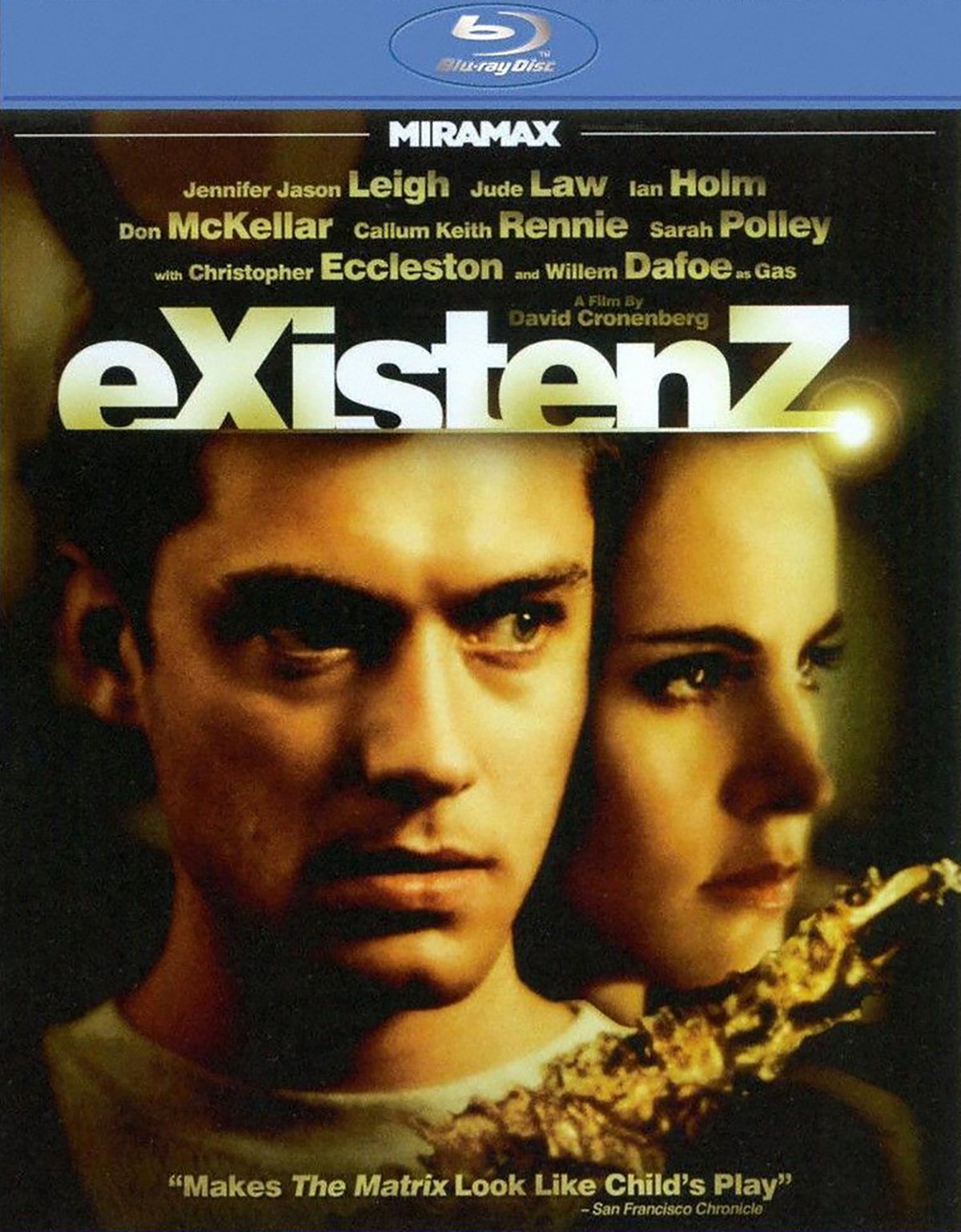 David Cronenberg’s eXistenZ never seemed prescient until suddenly it was. Which isn’t to say, of course, that video games have evolved to a point of such technical sophistication that gamers are living in some Baudrillardian fantasy; the dream of a Second Life simulacrum even better than the real thing never came to fruition, and maybe it never will. The point is that it doesn’t need to: eXistenZ isn’t about virtual-reality verisimilitude so much as it’s about fictional identities coming to matter more than real ones. When Gas (Willem Dafoe), a gas station attendant and “gamepod” obsessive, notes that he operates a gas station “only on the most pathetic level of reality,” is it any different than a sales clerk or accountant or real estate lawyer in 2012 self-identifying as a sports blogger or web designer or social media guru? It’s news to exactly nobody that having more regular social interaction online than in real life is no longer the niche comfort zone of nerdy recluses, and how our online friends perceive us is often markedly different than how we’re perceived by people who know us offline. To a thousand people on Twitter I’m an online film critic; to my dozen day-job colleagues I’m a corporate account manager for a telecommunications firm. At what point, exactly, does the former eclipse the latter, and how am I supposed to self-identify? It’s not about delusion, or retreating into some shadow life away from the daily grind. But it’s about the increasing sense that how I am online—my disposition, my attitude toward others, how my peers perceive me—defines me more accurately than how I am when I step away from the laptop or the smartphone and just live a normal life. “I’m feeling a little disconnected from my real life,” Ted Pikul (Jude Law) says mid-game. No kidding.

When eXistenZ was released in 1999, it had the disadvantage of being lumped in with the year’s other and considerably more popular purveyor of fantasy-world illusions, The Matrix. The latter captured the zeitgeist while the former, tragically, was instantly relegated to carbon-copy status—a consequence perhaps of Cronenberg’s art-house origins and access to a comparatively meager budget. But where The Matrix, as a result of its immense popularity and seemingly never-ending presence in the public consciousness, became a prime subject of critical and pop-philosophical investigation despite having little meat on its high-concept bones, eXistenZ more or less faded from memory even though it had and still has much to say. Both tap into the then-burgeoning social anxiety of a newly minted digital era, much as War Games and Hackers did for the boom of late-’80s home computing; the difference is that, while Cronenberg uses gaming and computer technology as a timely entry point into something deeper and more psychological (much as he did with Videodrome and home video), the Wachowskis turn their ones and zeros into a vaguely Descartian cautionary tale that takes seriously the prospect that we’re sleepwalking through some insidious unreality. As a big-budget studio fantasy, its hypocrisy is blatant: If the point is that, in an age of endlessly proliferating screens, mass media has already replaced reality with fiction (as Baudrillard suggests), slow-motion gun fights and revelatory special effects are hardly the antidote.

eXistenZ is quite simply about shifting identities in an unstable world, which is why, budgetary restrictions aside, it emphasizes character over spectacle. Despite taking place almost exclusively in the fictional landscape of a game world, what few special effects emerge are, in typical Cronenbergian fashion, physical rather than digital; the one major use of CGI is a two-headed lizard/frog hybrid, and its appearance is genuinely surprisingly more because we’re so unaccustomed to seeing anything wholly computer-generated than because of how strange it actually looks—and that effect still holds up remarkably well. Part of what makes the film itself so subtly unsettling, in fact, is how infrequently it delves into demarcated fantasy, which is what we’re trained to expect from a film about video games and virtual-reality fictions. What we get instead is often very deliberately mundane: The future fashions and gadgets brandished as a sci-fi convention seem oddly simplistic and mechanical, the action set pieces (if one can even call them that) are pared down to the basics, and even the overtly fantastical game environments look like normal places in the real world. Cronenberg matches this strange banality with a striking formal artifice: Rear projection is used conspicuously, no attempt is made to efface the rigidity of studio sets, and performances from reliably robust character actors seem stilted and plastic. It all adds up to something slightly unreal, which makes it, unexpectedly, one of the most memorable fantasy worlds ever realized.

Echo Bridge Entertainment dodges two bullets straight away. First they offer two decent DTS-HD Master Audio options, despite the back of the box listing only a single 5.1 surround track, which is a real relief. Secondly, the absolutely abysmal picture quality of this transfer’s first five minutes don’t stay bad longer than that. Color looks fine—though the film’s palette has never popped—and detail is fair both in close-ups and at a moderate distance (David Cronenberg favors medium shots throughout). Less satisfying is the overall softness of the image, which often looks diffused and washed out, and the surprising amount of dirt and damage evident across the source print. Considering that eXistenZ is barely a decade old and is still held in high regard as a kind of modern cult classic, you’d think Echo Bridge would have had a bit more to work with on that front.

A paltry offering of bad-looking archival interviews is, sadly, all Echo Bridge shelled out for: a half-hour chat with Jude Law that appears to have been shot in somebody’s poorly lit basement is the most substantial thing here by some margin, which is saying something; Willem Dafoe looks so confused during his talk that it isn’t clear if he even remembers what film he’s there to discuss. These, of course, are of value strictly as curiosities. What’s frustrating is that the disc doesn’t include the feature-length commentary with Cronenberg included on the earlier (and still in print!) version of the DVD, which is especially disappointing given the caliber of that track.