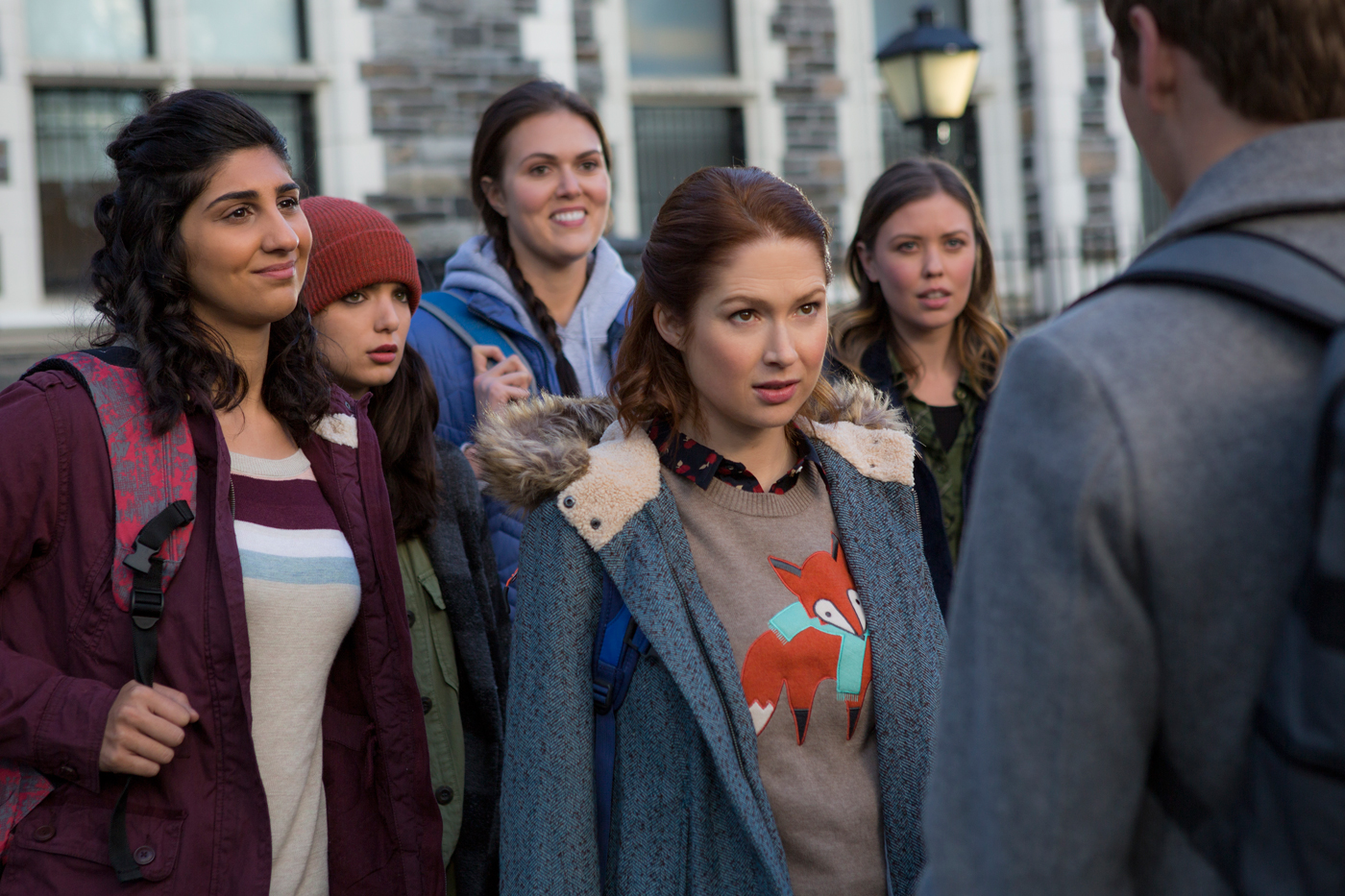 As she exhibited on 30 Rock, Tina Fey has a formula: Tell a thousand jokes, tell them in all shapes and sizes, and tell them at a rapid-fire pace. Unbreakable Kimmy Schmidt’s bingeability owes in large part to this “make ‘em laugh by any means possible” philosophy. It also allows for a certain amount of forgiveness: If a joke is stale or dated (and plenty are), one need only wait a few seconds for the next pun or gag to make our memory of a comedic faceplant fade. As it returns for a third season, the series, co-created by Fey and Robert Carlock, remains as much of a beautiful mess as ever. Its bright, kooky universe is stuffed with enough zingers to fill an entire season of CBS programming, but its airy, absurdist jokes fall short of truly exploring and critiquing the weightier topics introduced throughout the season.

At the onset of Unbreakable Kimmy Schmidt’s third season, Kimmy (Ellie Kemper) is celebrating the completion of her G.E.D. and once again trying to figure out her next move. After a few moments of picking her landlord Lillian’s (Carol Kane) ever-irreverent brain, she decides to apply to college. (According to Lillian, it’s what most white girls do after high school.) And so, like Rodney Dangerfield before her, Kimmy is going back to school. But Kimmy’s past demons darken her bright path toward collegiate status. The Reverend Richard Wayne Gary Wayne (Jon Hamm)—who, it was revealed in the second-season finale, isn’t only her abductor, but also her husband—won’t stop calling from prison to hound Kimmy about signing the divorce papers. At the suggestion of Jacqueline (Jane Krakowski), Kimmy withholds her signature to put herself, for the first time, in a position of power over the reverend.

At the start of the show’s first season, Kimmy was defined entirely by her dizzying exuberance, naïveté, and commitment to 1990s pop-culture references. But the farther she’s gotten from the bunker, the more her identity—and her friends’ identities—has evolved. The third season takes care to increase the focus on the side players. As the series has progressed, we’ve seen Lillian, Jacqueline, and Titus (Tituss Burgess) develop from mere joke-telling vessels into fully realized characters as they navigate relationships, politics, and other tenets of adulthood. In the case of Titus, that means circling new job opportunities while simultaneously staving off scurvy.

It’s admirable that the supporting characters are being given weightier plotlines, but the show isn’t always successful at exploring subjects like corporatization or race in the most nuanced way. Lillian continues her fight against the scourge of gentrification. Last season, that threat was most vividly presented in the form of a couple from Austin who served as harbingers for East Dogmouth’s imminent population of young professionals. The jokes may have been obvious, but the pair at least formed a concrete, realized enemy for Lillian. This season, the subject of Lillian’s contempt is hazier: She uses her new position in district council to attempt to block the construction of Big Naturals, an organic supermarket set to open in East Dogmouth. The store—and, more broadly, Lillian’s new political role—introduces a variety of subjects that are vivid realities in any urban environment. But while gentrification, clean water, and food deserts are relevant issues, it’s nearly impossible to ground such topics in the flighty, fantastical world of Unbreakable Kimmy Schmidt. It’s hard to commiserate with Lillian’s disdain for big-box supermarkets when the scurvy-ridden Titus must shop at a bodega whose only vaguely vegetal offerings are fruit-flavored edible underwear, buttons masquerading as vitamins, and something called “bread salad.”

Though Jacqueline does some growing up this season, her storyline has remained reliably cringe-worthy. Even though the Washington Redskins are a sensible target for Jacqueline and her bespectacled boyfriend, Russ Snyder (David Cross), to take on, it doesn’t make up for the fact that we’re watching Jane Krakowski, an actress of mainly Polish descent, play a Native American woman. While the subplot gives Jacqueline a sense of purpose (not to mention a glimmer of morality), hearing Krakowski—who’s as blonde and blue-eyed as they come—insist that she must pretend to be a white woman to protect her Native American heritage adds a layer of discomfort to her otherwise righteous plan of squashing the Redskins.

Kimmy’s plotline isn’t devoid of creaky stereotypes either. The show’s second season was disdainful of the Airbnb-ing Austinites, and the third has found a new subculture of millennials to turn into hackneyed caricatures: college students. When a TaskRabbit gig leads Kimmy to Xanthippe’s (Dylan Gelula) dorm room at Columbia, she meets a group of Simone de Beauvoir-reading, sex-positive students. They impress the impressionable Kimmy with their constant references to classism and feminism, and throw around SAT-worthy terms like “regressive” and “abrogate.” Some of the jokes here work, especially when Kimmy tries her darndest to fit in with the politicized youngsters, but the series leans too hard on millennial-speak 101 to score its comedic points. Xan’s roommates fawn over a “woke” male student, pointing to his minimal use of microaggressions as an indicator of hotness. They look forward to tapping a keg at an upcoming party—with the keg’s consent, of course. Sure, some of the forced vernacular is ridiculous, but it also exposes an irony that exists within the fabric of the series: The exceedingly politically correct characters that Unbreakable Kimmy Schmidt mocks would never stand for its questionable Native American plotline or use food scarcity as a punchline.