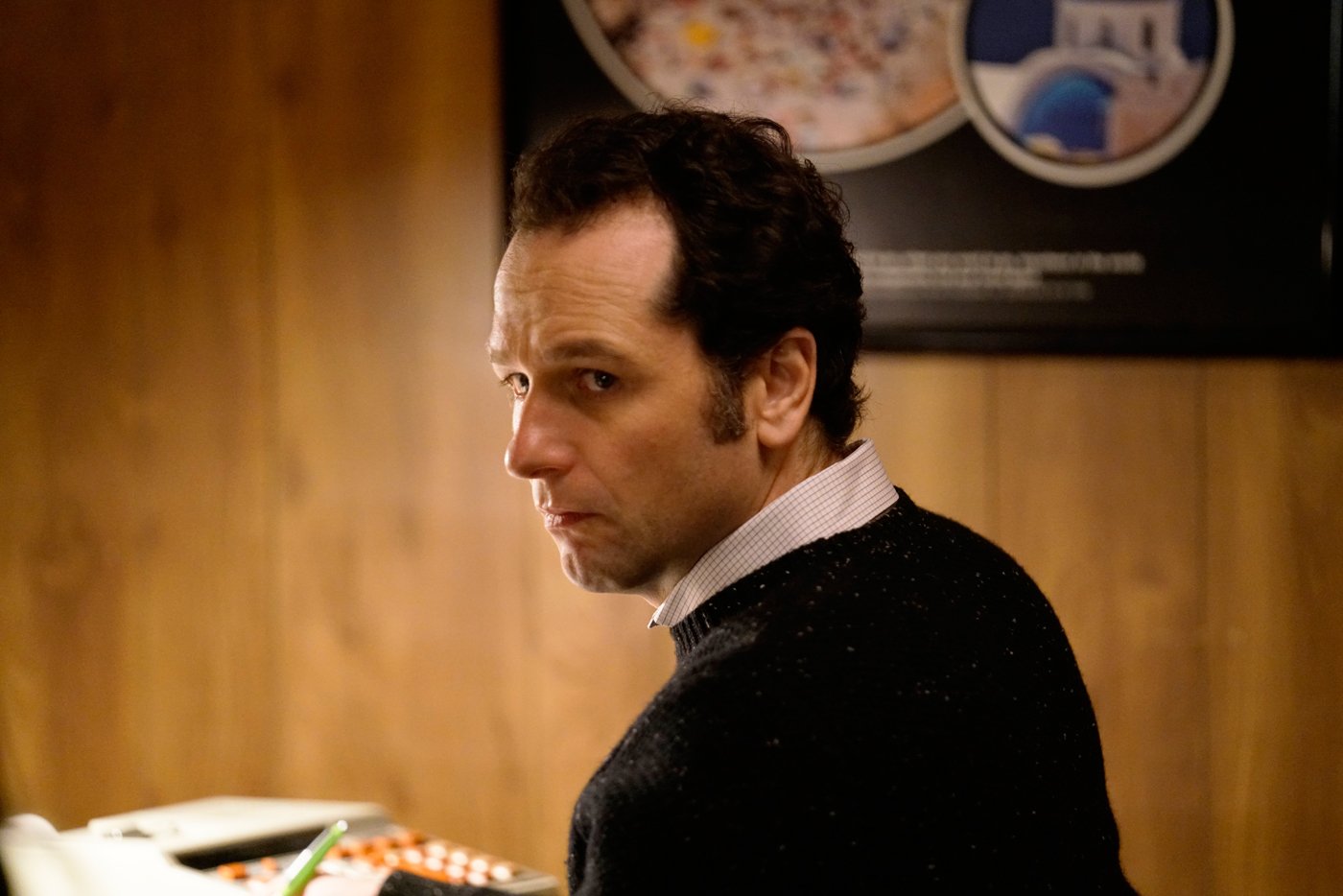 Last week I bemoaned the absence of Paige (Holly Taylor) from “IHOP.” But in tonight’s episode of The Americans, “Darkroom,” what happened during that absence is purposefully charted as a governing principle. Philip (Matthew Rhys) and Elizabeth (Keri Russell) arrive home from a day of spywork and find their daughter obsessively mopping the kitchen floor. She reveals to them that she pried again into Pastor Tim’s (Kelly AuCoin) diary, learning that he thinks she’s screwed up in the head. What follows is a negotiation that serves, like most things in this series, dual purposes: a loving father and mother talking their daughter off the ledge with assurances that they know her better than anyone else, and Russian spies trying to communicate to a potential recruit that allegiance to the Soviet Union is an imperative.

Before its meaning is literalized, the episode’s title is strictly metaphorical, and its weight is a crushing one. Philip and Elizabeth’s first conversation in this episode with Paige deepens and ramifies the couple’s relationship to Tuan (Ivan Mok). Last week, Elizabeth pointed a gun to his head, asking him why he sneaked off to Harrisburg, Pennsylvania. This week, in the kitchen of their pretend house, Elizabeth speaks to Tuan as she would to her daughter, almost lovingly. Before telling him to never do what he did again, she praises him: “You’re special, Tuan. I admire you. I believe in you.” Those words resonate as a mantra—a means of pulling Tuan, who stands before her less afraid than ashamed, out of the darkness into which he’s descended.

It’s a cruel irony, then, what Tuan is doing to Pasha. Philip, Elizabeth, and Tuan are playing a dangerous game with this fragile teenager, subjecting him to the sort of emotional torture that could feasibly drive him to suicide, or worse. Really, though, they seek to sow the seeds of his devotion to their cause. The episode opens with Philip sharing homebrew with Pasha’s father, Alexei (Alexander Sokovikov), who speaks kindly of his son and longingly of the mother who, one time, took him skating after school for reasons he doesn’t articulate but probably had to do with having to cook what little food she had for a child who no longer had a father. Tuan, who’s just gotten bullies to put dog shit in Pasha’s locker, works with Philip and Elizabeth to foist Alexei and his family back into the darkness from which they escaped. It’s a darkness that Philip and Elizabeth, despite the loyalty they claim to have for their homeland, probably wouldn’t want to return to either, though they likely justify their cruelty to the Morozovs by reminding themselves that Alexei, in Russia, will be able to put his work with wheat to very good use.

“Darkroom” remarkably threads together these impressions of shared torment—of everyone’s dangerous practices and their complicated relationship to their homeland and offspring. Over in Moscow, Oleg’s (Costa Ronin) life is still shrouded in despair, though you wouldn’t know it from the impeccable calm with which he goes about planting his own seeds, of allegiance by way of misdirection, as he sits next to Ruslan (Ravil Isyanov) during a stakeout. Why they’re tailing the woman who Dimitri pointed them toward is of less consequence than the manner in which Oleg plays up his confusion as to why Directorate K is hounding him—to secure Ruslan’s trust, as Oleg might one day need to exploit whatever friendship they’re building. Later, when Oleg has dinner with his parents, Igor (Boris Krutonog) and Yelena (Snezhana Chernova), they sit across from each other in total silence, understanding that they’re stranded in a purgatory-like realm of fear and indecision.

Back in Paige land, the work on the show’s part to underscore the girl’s state of emotional affairs feels a little too on point. Philip and Elizabeth approach Paige with a proposition: to get Pastor Tim out of the picture by securing a job for him somewhere far away where he can spread his goodness and gospel, and by placing the decision entirely in Paige’s hands. She balks at the weirdness of the plan but seems to recognize that it’s more humane than the alternative: something not unlike what Elizabeth did to that would-be attacker in “Dinner for Seven”. But the way, in this moment, that Paige brings up the wheat and “the bugs and stuff” feels awkwardly shoed into the sequence, a means for father, mother, and daughter to talk of such things as making a difference and doing important work that few will ever know you actually did, and as such make explicit what’s already there: the understanding that the demands of Paige’s work will be not unlike that of her parents.

That sort of over-determined approach is common to The Americans, but almost always it’s at its most effective when delivered onto us via a more operatic inflation of idea and feeling—a wringing out of symbolic force from the most mundane of actions. As in the scene that thrillingly cuts between Philip jogging and his latest E.S.T. meeting. “You’re in the dark, so what do you do?” the instructor begins, as Philip runs around a park, eventually dropping a message hidden inside a rock that eventually lands on the desk of Tatiana Evgenyevna Ruslanova (Vera Cherny) at Directorate S. “When you’re walking in the dark, you don’t know the answer, but you have an instinct for how to move forward. The instinct is neither right nor wrong, it just is.”

That lecture, about how we’re machines that operate by stimulus and response, visibly rattles Philip, and it resonates strongly throughout the remainder of “Darkroom.” Last week, he was in no rush to meet with Father Andrei (Konstantin Lavysh) again. The priest is without a handler, and Philip wasn’t in the mood to ease his burden. But this week, wanting to feel as if he can do something of great consequence and of his own volition, Philip takes Elizabeth to Andrei so the priest can make their marriage official. Yes, the religious context of the ceremony, conducted inside a basement lit by only the flickering of a few candles, isn’t ideal, but at least it comes with the promise of legal validation—something that wasn’t offered to them long ago by Viktor Zhukov (Olek Krupa) and his phony marriage certificate.

Can Philip ever go to another E.S.T. meeting knowing that he’s acted out of something that feels like free will? And can he ever return to Topeka, at Claudia’s (Margo Martindale) behest, knowing that his marriage to Elizabeth is both real and stronger than his ties to his homeland? Those are just some of the mysteries that immaculately spill over into the final scene of the episode. But first, a note about the look that Paige gives Pastor Tim in an earlier scene. Side by side, they pack food into boxes intended for the homeless, and after she points out that the church is low on beans, their conversation turns to Paige and her well-being. How she brings up to him the needs of others feels like some kind of trap, but what exactly does Pastor Tim reveal when he turns to Paige and goes on about how she’s moving in the right direction, how she has a lot to handle but that she’s handling it well, how she’s going to do great in life, and how she should take stock in the word of the lord. And the look she gives him resembles, on the surface, that of a doubting Thomas.

By the end of the episode, though, after father, mother, and daughter have walked into their garage and transformed it into a darkroom, her look is understood to be rooted in something closer to contempt. Paige comes home and reveals that she took photographs of Pastor Tim’s diary, so that she and her parents can learn where to send him, maybe South America. Set to Bauhaus’s “Slice of Life,” a song about deceit, control, living in the moment, and being yourself, the scene sees Philip and Elizabeth processing the photos in the camera and hanging them up to dry. And as the show’s own camera slides across the snapshots, Philip and Elizabeth process the hysteric words that Paige has already read, among them: “I’ve seen sexual abuse, I’ve seen affairs, but nothing I’ve seen compares to what P.J. has been through.” And in this instant, those words that Pastor Tim spoke are exposed to everyone as lies—and maybe the stimulus needed for Paige to embrace a new religion.

Review: Master of None: Season Two