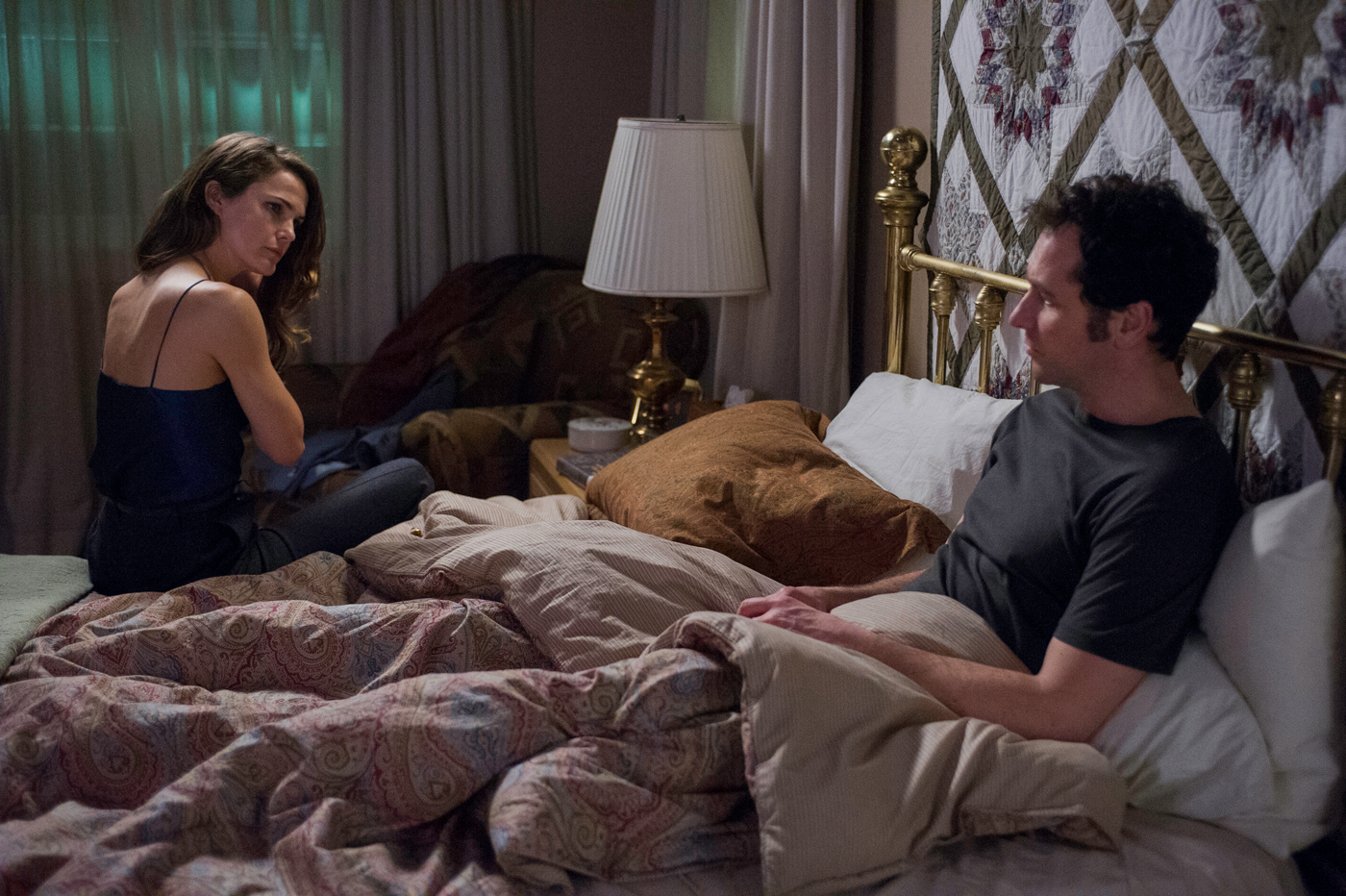 Diehard fans of The Americans, particularly those who’ve learned to stop worrying about this fifth season’s increasingly unclear endgame and love its tapestry of emotion-rich character moments, may have cried “Uncle!” not even halfway through “IHOP.” The episode feels less like a continuation of this season’s efforts up to this point than a tangent—a revisiting of loose ends from past seasons. Throughout, there’s a distinct impression that old ghosts are about to be put to rest, but less certain is if anything revealed here will dovetail at any point in the future with Philip (Matthew Rhys) and Elizabeth’s (Keri Russell) present-day sleuthing. Worse, the episode engages with all that’s unresolved in everyone’s lives almost solely at the level of plot.

If not for the “previously on” segment that opens “IHOP” and helpfully reminds us that even in death William Crandall is still hard at work, you may have thought you were accidentally watching deleted scenes from the show’s third season when the episode proper commences on Isaac Breland (Frank Deal) being handed a file by a colleague. It’s been so long since we’ve peered in on this man, head of the C.I.A. Afghan Group, that it’s a necessity for the series to provide a flashback of Philip planting a bug in the suitcase that sits near Isaac’s feet. We then abruptly cut to a short scene, featuring Philip with Isaac’s daughter, Kimmie (Julia Garner), that provides Rhys with the heady showcase of having to ironically articulate the existential angst that’s gripped Philip this season through his alter ego’s desire to be with his own son. But you may feel as if this jolt of pathos is compromised by Philip and Kimmie celebrating her 17th birthday, a detail which feels as if it exists only as a defensive response to viewers who were ever skeeved out by the age difference between these two individuals. She’s legal, all right, now get over it!

The self-consciousness with which that scene is written spills into the rest of the episode. The scene immediately following the opening credits, set inside Philip and Elizabeth’s travel agency, is practically a meta-textual address—and an insecure one at that—of all the narrative cards that the series currently has on the table. After Philip jokingly remarks that Henry (Keidrich Sellati) should be doing the agency’s books given how good he is at math, the conversation shifts to Paige and how she seems to actually be over Matthew and then to Tuan (Ivan Mok) and how Elizabeth thinks that he appears lonely. Even before their talk is interrupted by a co-worker and Philip takes a call from the K.G.B switchboard operator, the scene feels stiff for its roll-call of information. Later, when Philip reveals to Elizabeth that a group of mujahideen in Afghanistan came down with what was probably Lassa fever, there isn’t a sense of how this discovery may be further souring these husband-and-wife spies to their cause; it scans as a bookkeeping maneuver, suggesting that at least the show’s bioweapons subplot has been resolved.

The Americans is making a rather confused habit of uncertainly closing one book while at the same time opening another. It may sound impossible on paper, but the series seems to be at once doing too much and not enough—dodging resolution here by reinforcing irresolution there. At one point, “IHOP” introduces us to Father Andrei (Konstantin Lavysh), Philip and Elizabeth’s temporary handler until his permanent replacement arrives in “two to three months.” In a hospital hallway, Andrei explains to Philip that he’s feeling a little out of his element using Gabriel’s (Frank Langella) equipment before then relaying some information about a certain Father Victor meeting with some Frenchman. The man is obviously speaking in code, and whether or not that information will actually be decoded in subsequent episodes will of course remain to be seen, but by the end of this sequence I threw my hands up, wondering if all of Andrei’s rigmarole was really necessary just so we could arrive at yet another acknowledgment that spywork is bad for the soul. The only difference here is that the psychoanalysis is delivered by a legit priest, and as such the recommended treatment is prayer.

In a later chapter of his episode’s reunion tour, Stan Beeman (Noah Emmerich) pays a visit to Frank Gaad’s widow, Linh (Christine Toy Johnson). The F.B.I. has discovered that known K.G.B. officers were in Thailand at the same time as her husband, which is enough for Stan’s superiors to conclude that Frank was murdered. Curiously, and in one full swoop, The Americans makes mincemeat of the benevolence that Stan extended to Oleg Burov (Costa Ronin) by blackmailing the higher-ups at the F.B.I. Sitting across from Linh, who complains to him about no one having come to see her after Frank’s death, Stan tells her that he has the power to sacrifice someone who never did a thing to Frank in order to avenge his death. The aversion that Stan expresses is consistent with his struggles throughout the season so far, but the cowardice inherent in the way he puts Linh in the position to throw Oleg under the bus, and as such keep his hands clean, is less so.

While it will remain to be seen—like most things in the series—if Stan actually follows Linh’s lead by pursuing revenge, “IHOP” seems to preemptively justify a moral course correction on Stan’s part by having Oleg offer details of his relationship with Stan to Major Kuznetsov (Sacha Slobodyanik) from Directorate K. Yes, Oleg has to offer Kuznetsov something, and it certainly makes sense that tattling on Stan is the most convenient thing for him to do, but the spellbinding work that Ronin does at ever so subtly conveying Oleg’s discomfort in doing so isn’t quite enough to disguise the convenient and almost mechanical means by which both Oleg and Stan have been simultaneously pushed toward gunning for each other—and this in the wake of eight episodes that saw these men locked in a sort of telepathic communion where they were working to ensure each other’s livelihoods.

This season of The Americans has expectedly delivered on the promise of diving deep into Paige’s headspace in the wake of her learning about her parents’ secret lives. As such, “IHOP” almost inevitably disappoints, especially given the ending of last week’s episode, through the conspicuousness of her absence here. One of the two scenes in this episode that are set inside the Jennings home sees Henry telling his parents that he would like to go to a private high school in New Hampshire, no doubt in large part because his “new friend” Chris plans to go there. Naturally, Philip and Elizabeth bombard him with the expected questions about the school’s expense and religious affiliation (which, despite the name St. Edwards, is nil), but the one I asked was why audiences are even getting this scene in the first place, as it seems to exist for no reason than the clumsy setup for Henry actually being out of sight, and as such out of mind, for the show’s final season.

Back in grim, washed-out Moscow, we’re not only offered another surprise glimpse of Martha (Alison Wright), dumping some sautéed onions on a sad-looking baked potato, but Gabriel as well. It took me some time to appreciate her brief appearance in “Midges,” like the exit Gabriel makes at the end of “The Committee on Human Rights,” as a poetic send-off to a beloved character, so I was almost disappointed to see her again, sitting across from Gabriel and discussing nothing of great consequence beyond the difficulty of learning Russian and whether Martha’s parents know where she is.

At one point, Martha asks Gabriel if she has news for her, to which he says that he doesn’t and that he’s retired, which suggests that his visit has been made, on the surface, out of loneliness. But we’ve come to understand Gabriel well enough this season to also know that he’s feeling guilty—and as these two individuals sit there, stewing over how they’ve been exiled to a purgatory-like nowhere land, the scene aims for pathos that ultimately eludes it. The Americans has made viewers obsess so much this season over when and where characters will resurface, if at all, that as this scene rather languorously drifts into the ether, with Martha telling Gabriel to go and for him to never come back again, investing in their feelings comes to feel like a risk. If the impression the scene offers of both Martha and Gabriel’s emotional devastation feels almost half-hearted, blame the series for not really being sure if it’s exactly done with these characters.

The episode’s title gets its name from…well, you know where. Tuan is missing in action and, as a result, Philip and Elizabeth are feeling nervous, wondering if he’s talking about them to the wrong people. Elizabeth subsequently goes snooping in his bedroom, in a scene that thrillingly forefronts her immaculately precise skillset, before she and Philip’s gang of spies start tailing Tuan. He’s followed all the way to Harrisburg, Pennsylvania, and to the titular pancake house, for reasons that he reveals to his pretend mother and father as they grill him for information upon his return to Washington, D.C.

Tuan’s need to make contact with his adopted family, because his little brother is sick with leukemia, is affecting, and his confession resonates with the torments that Philip and Elizabeth feel. The moment even thoughtfully connects to the exchange that Oleg has with the imprisoned Dimitri (Leonid A. Mandel) about the integrity of family; the former hands the latter an apple, a peace offering that, through its biblical implications, points to how everyone on the show has been cast out of their comfort zones. But as Elizabeth and Philip drive away from the home they pretend to share with Tuan, their familiar conversation—about whether the information they’ve just been fed is in fact true—comes to feel emblematic of an episode that sees The Americans in a holding pattern, almost reflexively repeating itself because it’s uncertain of how to give its characters, and by extension viewers, a sense of closure.