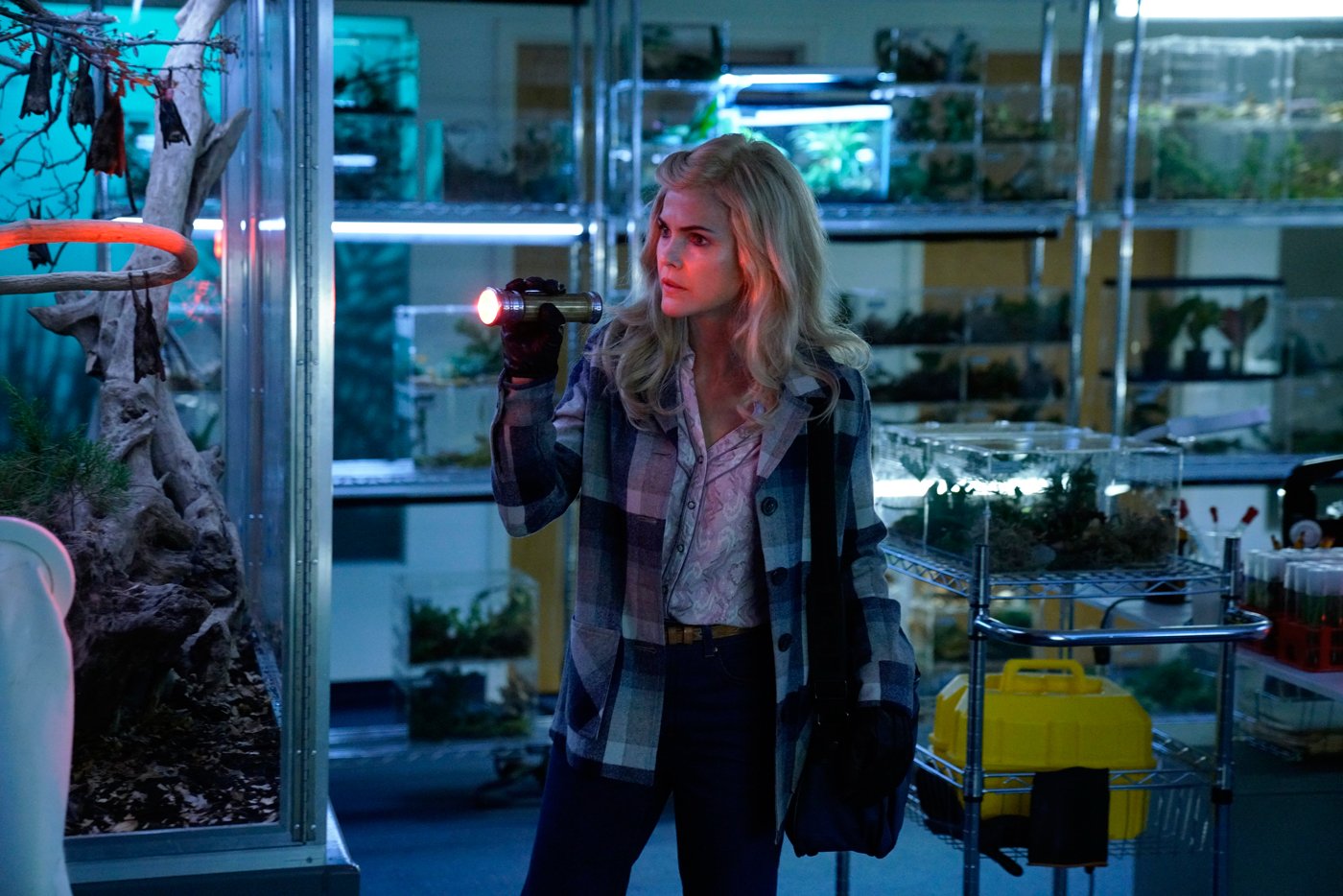 Last week, I doubted the sincerity with which Philip (Matthew Rhys) reacted to Gabriel contemplating the possibility of the United States government tampering with the Soviet Union’s food supply. Though I still think the overall scene was doing much work for the audience’s benefit, Philip’s seeming incredulousness was instantly reoriented for me by the look he gives Alexei (Alexander Sokovikov) in the opening scene of this week’s episode of The Americans, “The Midges.” The Morozovs and the family of spies pretending to be their friends are bowling when Alexei, as is his wont, begins to rail against the oppressiveness of the life he lived in Russia. It is, of course, in Philip and Elizabeth’s (Keri Russell) best interests to feign sympathy for whatever Alexei tells them, but the expression on Philip’s face is unmistakably sincere, very much rooted in the horror of remembering that which he can’t forget.

This season of The Americans, like every other before it, abounds in words and expressions that are understood to resemble masks on the outside. But the look that Philip gives Alexei is a naked one, and the depths of feeling that it evokes attests to Rhys’s talent and his character’s trickier high-wire act of deception. What would Elizabeth have thought had she looked at Philip while Alexei was talking? Would Philip have altered his expression—knowing that his wife knows their anti-American views aren’t totally in sync—to make it seem that his sympathy for Alexei was a little more recognizable as an act of pretend? It’s still a question just how much Philip and Elizabeth love each other, but the fact that the first time they’re seen being intimate with one another in a long time is while they’re dressed as cowboy-hat-wearing Oklahomans suggests that on some level they thrive on performing for one another because it allows them to believe it’s a form of love.

Philip’s look haunts me, like Alexei and Tuan’s (Ivan Mok) words throughout the episode, for the way it resonates with my experiences as an immigrant from a communist country. Alexei could be any man in my family who’s ever vowed—melodramatically relishing in the freedom of speech allowed by America—to never return to Cuba for all the horrors they suffered there, from hunger to imprisonment. And Irina (Marina Squerciati) could be my well-tempered mother, knowing when to speak, when not to, and that allegiances to homeland can be vastly different within the same clan. I came here when I was four, and yet people who I couldn’t possibly have remembered were still interviewed about my political activity before I could be issued a visa to return to Cuba for a one-month visit. Naturally, when my mother and I sat side by side in the home of an old friend in Guantanamo, she knew to bite her lip at the sight of a Che Guevara poster hanging on the wall.

The attention to behavioral detail that goes into any given episode of The Americans is unlike that of any other series on television—with the possible exception of Better Call Saul. All this series has to do for it to thrum with impossible tension is to linger on an exchange wherein someone might say something that in most contexts is impossibly mundane but can set them up for disaster in the presence of, say, Russian spies. But the show can feel overly scripted when this level of detail, so revealing of a character’s inner turmoil, is too conspicuously propped as an occasion for Elizabeth and Philip to collect data for future reference, as in the scene where they exchange looks as Tuan first goes off on Alexei and then on the U.S. for what our country did to Vietnam during the war. Tuan is looking more like a loose canon with each passing week, so we’re tempted to wonder if his pretend parents will get rid of him before he can go rogue and do something to Alexei.

That impossible tension, though, becomes something altogether prismatic and rife with a different kind of unpredictability whenever The Americans homes in on Paige (Holly Taylor) as she continues to wrap her head around what it means to be the American daughter of Russian spies. In “The Midges,” she rubs her thumb and finger together, just like her parents taught her at the end of “Pests,” after probably sensing the desire to tell Matthew (Danny Flaherty) more than she should about what’s troubling her emotionally. Earlier, Philip and Elizabeth informed her about their new assignment, and Paige’s curiosity and confusion throughout the scene attests to how she’s at once thrilled and frightened by how such a fantastical wrench has been thrown into the arc of what should have been a normal coming of age.

“The Midges,” which gets its name from the insects that Philip and Elizabeth and their supervisor, Gabriel (Frank Langella), believe is being used by Alexei to target the Soviet Union’s wheat, impressively coils together its two major plot threads: Philip and Elizabeth finding out more information about the “kind of midge that’s never been seen outside of Australia” upon first breaking into an Oklahoma science lab and then the poor lab director’s back, and OBKhSS operative Oleg Burov (Costa Ronin), back in Moscow, trying to get a handle on his country’s not-so-simple economics of supply and demand by investigating potential fraud at a supermarket. Throughout, one thrills to the possibility of how these plot strands will arrive at a shared end game—and at the same time as we’re receiving a fraught lesson in how money and privilege ensure that certain Russians eat better than others.

Around these major plotlines, smaller ones are too abruptly introduced or reprised without offering viewers a clearer sense of their long game: agents Dennis Aderholt (Brandon J. Dirden) and Stan Beeman (Noah Emmerich) are suddenly on an investigative trail that will probably continue to run parallel to Philip and Elizabeth’s own until the end of the season, while Misha (Alex Ozerov), now in Yugoslavia, is one step closer to ostensibly obliterating the Jennings’ domestic arena. We’re also offered at one point a surprise glimpse at Martha (Alison Wright), shopping for food as Oleg walks out of the supermarket. The moment is dubious in its Easter egg-like presentation (will we be revisiting Martha this season, or is this the conclusion of her storyline?), but there’s a delicious drama to the way the camera pans to the left as Oleg walks out of the supermarket and stops to watch as Martha tries to make out what exactly she’s putting inside her shopping basket.

Something that’s always stuck in my craw about The Americans is the aesthetic register of the scenes set outside of America; the grain level and color saturation of these scenes, mostly exteriors, become simplistic mood rings for a particular country’s fundamental well-being. At one point in “The Minges,” Philip wipes the steam from his bathroom mirror, after which we’re offered a flashback to when he was young and starving alongside his family. The sequence, so grainy and muted in its colors, suggests the sort of work that Illeana Douglas’s art professor from Ghost World would make if she ever decided to branch out into prestige filmmaking. Which is to say, it adopts an easy affectation that’s evocative of a faded memory. This in spite of the fact that the anguished look that Philip gives Alexei at the start of the episode tells no lies: that he’s not a victim of the sort of amnesia, willful or otherwise, that this flashback unintentionally implies.