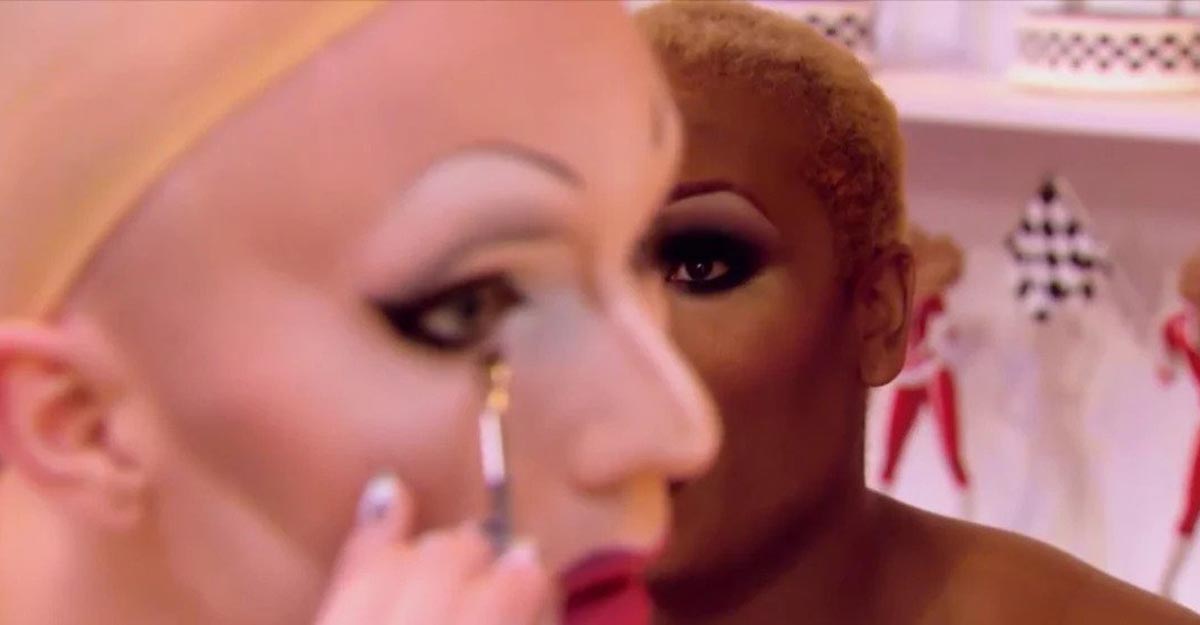 For the benefit of the children, or those clearly old enough to know better by now, let’s start our seminar on the fundamentality of “reading” at the very beginning, courtesy of a lesson plan most famously expounded by Paris Is Burning’s Dorian Corey, and forgive a thorough bitch for quoting in full:

“[Picking at] those little flaws, that’s because that’s a part of shade. That’s the idea; knock ‘em out if you can. Get ‘em any way. Hit ‘em below the belt. Shade comes from reading. Reading came first. Reading is the real art form of insults. You get in a smart crack, and everyone laughs and kikis, because you found a flaw and exaggerated it, and you’ve got a good read going. If it’s happening between the gay world and the straight world, it’s not really a read. It’s more of an insult, a vicious slur fight. But it’s how they develop a sense of how to read. They may call you a faggot or a drag queen, and you find something to call them. But then when you are all of the same thing, then you have go to a fine point. In other words, if I’m a black queen and you’re a black queen, we can’t call each other black queens because we’re both black queens. That’s not a read, that’s just a fact. So then we talk about your ridiculous shape, your saggy face, your tacky clothes. Reading became a developed form where it became shade. Shade is: I don’t tell you you’re ugly, but I don’t have to tell you because you know you’re ugly. And that’s shade.”

If any cast of RuPaul’s Drag Race needed the refresher course, it’s this season’s. Amid the borderline cloying camaraderie, every potential villain or beef this year has been but a minor key of what’s already stormed through the workroom. Alexis Michelle and Trinity Taylor’s petty pageant-circuit attitude and cutthroat interview snipes—the former, once again, dominates this week’s episode prologue with generically bitchy observations like “I’m thrilled to see the room thinning out”—pale next to Phi Phi O’Hara’s tantrums or Roxxxy Andrews’s grinning dismissals. Trinity’s rivalry with Eureka hardly sucked as much air out of the room before that knee injury sidelined the latter as the season-five saga of Alyssa Edwards versus Coco Montrese (who now seems to be in the middle of an audition for a late-night berth on cable news). If VH1 was hoping for, to quote season-four queen Sharon Needles about season-seven queen Max, “the softer side of drag” in their first season picking up RPDR, hunty, they got it.

Or do I have it all backwards? Is it possible that the mainstreaming of drag culture, so far as it extends from the show’s own universe, is breaking down the game as it existed for previous generations? Those who haven’t watched Paris Is Burning in a minute may forget that under its wicked repartee and umpteen needle drops of Cheryl Lynn’s “Got to Be Real” pulses the harsh and even violent realities of ball life. RuPaul herself was there to see Times Square before Rudy Giuliani turned it into an arcade for tourists, and she’ll never be without the sense of hunger and desperation and darkness that fuels her to this day. At the same time, she’s constructed pop culture’s drag-bar equivalent of Chuck E. Cheese, and some of the contestants at this point never knew anything else. RuPaul can continue, as she’s done virtually every season before, to declare the library to be open, but by this point she’s responsible for a lot of what’s on the menu. (Hell, Nina Bo’nina Shirley Q. Brown Liquor flat out lifts one of her reads from season four, when Latrice Royale called Jiggly Caliente, “BMW: Body Made Wrong.”)

RuPaul’s far from alone in responsibility though. No T, no shade, but what role do reading challenges have in the context of trigger warnings, the normalization of bully-shaming, and emotion policing? Dorian Corey said that it’s helpful to cut your teeth among allies in a bitch-eat-bitch world, but she gave that interview a few feet away from a man’s mummified body she hid in a large trunk. This season’s girls attended their proms and, in Valentina’s case, snatched the crown as homecoming royalty. As this week’s episode illustrates, no matter how much of the lingo Drag Race mopped from Paris Is Burning, we’re in a completely different era with what may as well be another language entirely. Some of the more culturally alert queens in the room—Shea Couleé, Sasha Velour, Valentina—accept reading as a scripted role they’re playing and work with that. (Valentina: “Peppermint…you need one.”) Others, who haven’t been in a position where they’re forced to develop a thicker skin, crumble.

Of course, Ru doesn’t make matters any easier when she informs, for the return of the celebrity-roast maxi-challenge, they’re not grilling her, their genial drag mama. No, they have to read Michelle Visage to filth. Unless you’re a stone-cold hustler like Bianca Del Rio, who could throw back a fifth of tequila and still rip Don Rickles and Phyllis Diller to shreds, it’s a tall order facing down the Minotaur-up-from-the-floor-up. Luckily for them, they have human dog whistle Ross Mathews in the workroom to coach them up. Oh wait, his advice boils down to verbally doing the Yes Dance at everything Ru suggests. Even Ross himself notes the ludicrousness of bringing him in to teach queens how to read when, as he said, he was the one on Chelsea Handler playing devil’s advocate on behalf of the celebrities being shredded by the rest of the panel: “I liiiiike Jessica Simpson!”

Ultimately, though, the bigger problem is that these queens simply aren’t mean. The only queen who is capable of being mean is too busy licking her wounds from the “library is open” mini-challenge to remain focused on the task at hand. Even Phi Phi and her short-ass fuse remained largely unfazed getting read, but Alexis lets two or three cheap cracks about her weight sink in as deeply as she can. Farrah’s joke about Pillsbury wanting their rolls back, in particular, may as well have been accompanied by a Mortal Kombat-like “Finish her!” for all the hurt Alexis lets splatter all over her face.

Later on, Alexis tells Ru she’s disappointed that the girls would choose to attack fat knowing her history with body issues. Ru, firmly reiterating the rules of the game, asks Alexis if she thinks it’s okay to dish it out but not also take it. Alexis defensively reasons, “I will try, whenever I come for anyone on that runway, to make sure that we’re all laughing together.” (Of course, the on-camera interviews are another story entirely, right?)

Alexis’s behavior isn’t affecting only her though. Farrah, fresh from the oven, tells Ru that she’s trigger shy, that she’s really not that girl. And, as one of the youngest queens, the math checks out. She hasn’t reckoned with the sting of rejection, or at least she hasn’t brought it up in the like-clockwork pre-runway confessional breakdowns that are increasingly weakened by their formulaic placement. She’s just what she says she is: a nice, unassuming, pretty drag queen. It’s being just that and nothing more that’s landed her nowhere near a challenge win to this point, so it’s no surprise that she decides to go for broke in front of the roast audience. Unfortunately, she simply doesn’t comprehend that reading and roasts are not just about saying mean things; it’s about the boxer’s dance, and Farrah’s got two left feet.

For a brief moment, it looks like Sasha, too, will intellectualize herself out of the game, but she averts pulling a Ben De La Crème doing stand-up situation and zings people in a manner that remains true to her style. Her adaptability remains one of the season’s ongoing surprises, and even this card-carrying Valentina fan died for Sasha’s intro: “A queen who combines all the excitement of smiling with the thrill of just standing there.”

Playing a character on season five’s roast worked for Coco Montrese, if perhaps only because it provided respite from her actual personality. But none of the queens who choose to hide behind a character this time around—and there are no fewer than four of them—fly particularly high. Valentina reflects Michelle’s Jersey-ocity back on her reasonably well, and Nina doesn’t embarrass herself as her own great aunt. But Trinity’s Hee-Haw honey is a non-starter. And Alexis? Honey, she lets her defensiveness manifest itself in a split personality. She covers herself in green body paint meant to reference Michelle’s least favorite color but is clearly a symptom of her deep unwillingness to let her own face—okay, her own drag face—spout material that she herself wouldn’t be able to handle.

Green with self-doubt, green with anemia, Alexis crash-lands in the bottom two with Farrah, whose insults are met with the injury of seeing Peppermint’s energetic, pitch-perfect shade clear the way for her first challenge victory, leaving Farrah the last queen standing without a win. And while Farrah may have lucked into looking more the part lip-synching to Dolly Parton’s “Baby I’m Burnin’” (as would’ve the other low-placer Trinity), Alexis manages to hold off the demons enough to send her packin’. Only time will tell if Alexis’s damage is permanent, but at this moment in the competition, even Nina could lend the girl a shot of confidence. It’s not cute.