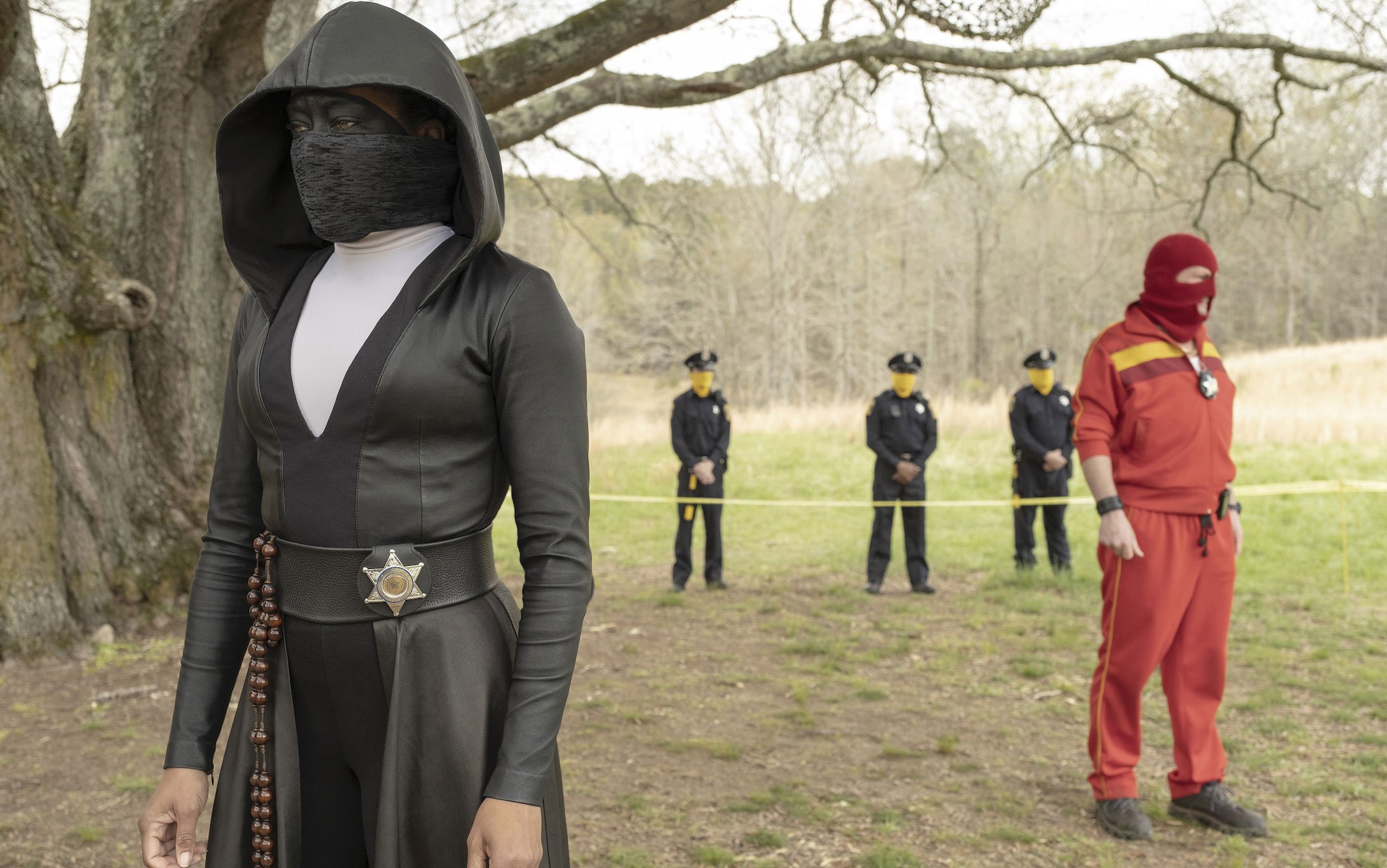 HBO’s Watchmen isn’t a straightforward adaptation of the graphic novel by Alan Moore and Dave Gibbons, but rather a present-day sequel where the events of the original took place decades ago. At one point, a newscast briefly shows a naked blue atomic man, Doctor Manhattan, on Mars, and in another, we learn that the Cold War effectively ended when a massive alien squid beamed into the middle of New York City, killing millions while uniting the world against some vague extradimensional presence. For a while, anyway.

In modern-day Tulsa, Oklahoma, a white supremacist group called the Seventh Cavalry has risen, opposing, among other things, the reparations paid to descendants of the people caught in the city’s 1921 race riot (these are called “Redfordations,” after President Robert Redford, who’s been in office for decades since Richard Nixon abolished the two-term limit). Some tensions, the series posits, won’t be quelled by the appearance of some separate, cephalopodic other; the hatred of the human other is still very much alive.

The Watchmen universe’s primary wrinkle, beyond an alternate reality so alternate that Vietnam is part of the United States, is the way costumed heroes figure into the whole thing. The Cavalry wears Rorschach-blot masks patterned after one of the graphic novel’s heroes, a violent right-wing vigilante-slash-detective. The crux of the original mid-1980s Watchmen comic lies in the complicating of the superhero archetype through a whole mess of psychological hang-ups and generally unsavory preoccupations (Rorschach, for one, is never explicitly racist in the original text, though he’s a considerable misogynist). It fixated on the idea that so-called “costumed adventurers” took to the streets to beat people up often for the hell of it, because they had a messiah complex or because their mothers told them to or just because it felt good to draw blood. Facing down oblivion was the thing it finally took to pull their heads out of asses that wore the underpants on the outside.

Yet even after the six episodes made available to critics, it can be a little tough to swallow some aspects of showrunner Damon Lindelof’s brave new Watchmen, where a big dead squid has apparently shifted the present racial paradigm so completely that the Tulsa police force is not just masked, but predominantly black. Police weapons are lodged in remotely unlocked car dashboard holsters, and racists live within a “Nixonville” trailer park as though they’re the new oppressed. The idea of a country that both won the Vietnam War and elected Nixon for five terms going on to accept a masked, armed police force composed mainly of minorities seems, to say the least, optimistic. The pacing doesn’t make things any easier to interpret, as the show spoons out details about its larger world as needed, often after deploying some particularly charged imagery. You’re mostly asked to take it on faith that the writers have thought this stuff through, that later everything will make sense rather than serve as empty provocation.

The ensemble cast is anchored by Regina King as Angela Abar, an ex-cop turned vigilante called Sister Night. Draped in a hooded long coat with face paint sprayed across her eyes, King brims with steely confidence as well as a controlled, driving anger. But it’s difficult to shake a general suspicion of the way the series positions racial pain as a constant instigator, with responses to prejudice seeming to entirely define its people of color; they’re more walking expressions of hurt than well-rounded characters. And though the first six episodes have not yet revealed enough about Vietnamese trillionaire Lady Trieu (Hong Chau), her initial appearances exhibit some typical, worrying signs of paranoia about Eastern invaders.

The series expands the comic in some fascinating ways, weaving a dense, bizarre mythology and a richly conceived world to get swept up in. The pilot episode in particular introduces various complicated ideas, drawing clear lines to fascism in the actions of the police and vigilantes. But the series misses some of the novel’s complexity in its eagerness for loaded imagery—lynchings, riots, police violence—and slowly-unfolding mysteries. These episodes offer little follow through on the initial themes, seemingly content to raise questions and then set them aside while indulging in the excesses of fascism-is-sexy fantasy, with “enhanced interrogations” dispensed upon the deserving while set to a soundtrack of fat synths by Trent Reznor and Atticus Ross. Regardless of whether the series plans to return to consciously critique these ideas, its habit of leaving them to hang in the air is troubling.

As thorny as Watchmen’s handling of politics can be, though, it still offers an intriguing rebuttal to its source material. Even the boundless cynicism of Moore and Gibbons’s comic had its potential rays of light, the idea that prejudice might look small once everyone recognized the futility of crying out to be better dead than Red. HBO’s Watchmen argues the ways injustice might persist, and in that sense, its alternate history doesn’t look so alien after all.

Review: El Camino, a Breaking Bad Sequel, Is a Man’s Rueful Lament for Past Wrongs

Review: Living with Yourself Is a Lesser Version of What It Could Be