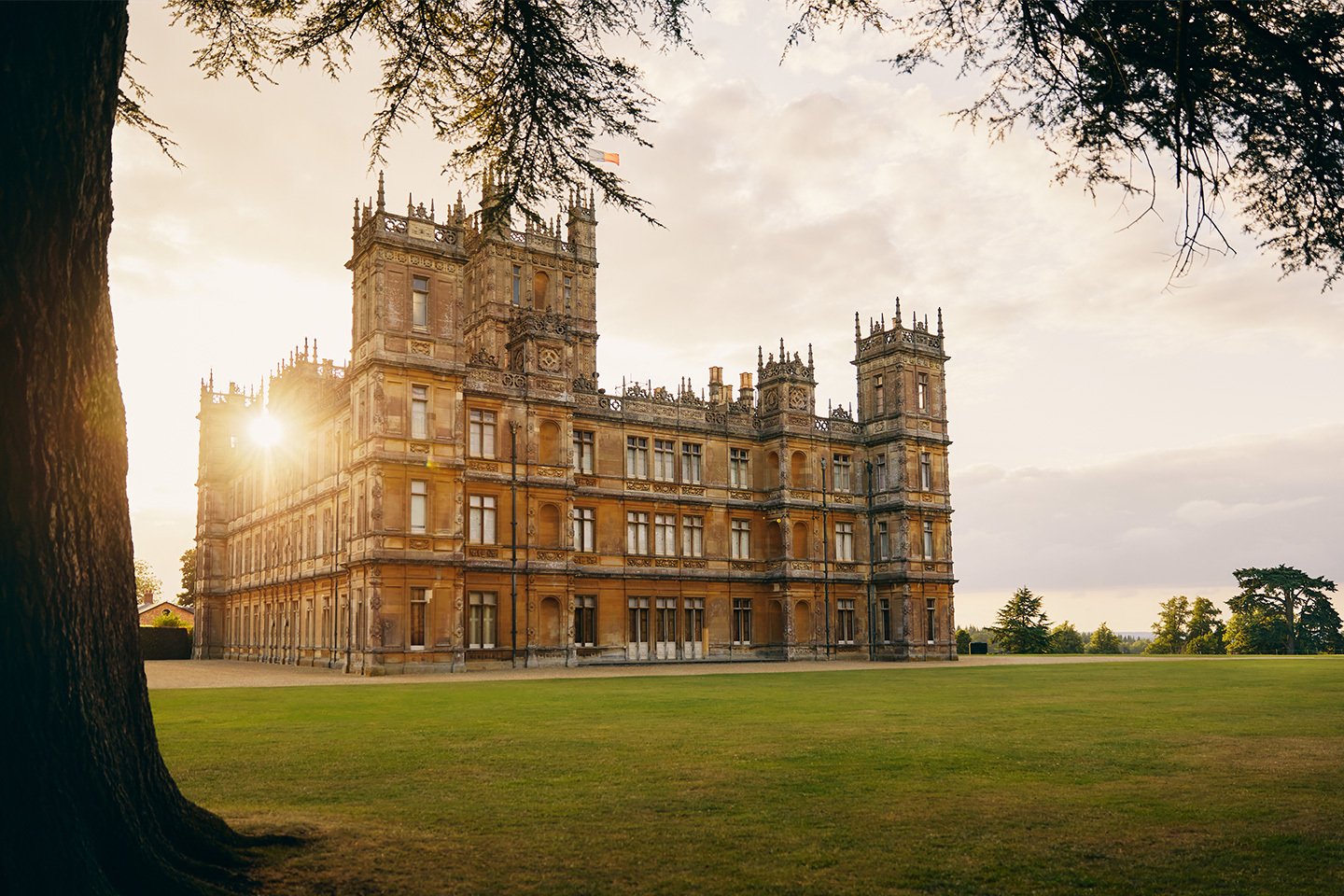 Along with the tail end of Lord Grantham’s (Hugh Bonneville) faithful Labrador, Isis, it appears at the start of the opening credits of each Downton Abbey episode: That spectacular English manse that gives the series its name. In real life, the home of the well-to-do Crawley family and their entourage of servants is Highclere Castle, and it rests in Hampshire, on England’s southern coast. The Jacobethan centerpiece of a 1,000-acre estate, Highclere offers a setting of seemingly limitless shooting potential, with baroque state rooms, hallways, and pristinely primped courtyards ready to house all manner of high-society intrigue. On the hit show, created by Julian Fellowes (who also scripted Robert Altman’s Gosford Park), characters regard the home as a bona fide entity, as if those regal archways and amply-adorned walls could actually breathe. It’s an age-old cliché, but the estate is very much its own character on Downton Abbey, and moreover, it’s the character that unites all others. Of course, it serves as the embodiment of the ever-looming issue of Lord Grantham’s heir, representative of all that’s to be gained by whomever carries on the Crawley lineage. But it’s also the common ground between the aristocrats and the help, as all see the good of the house as the greater good. Downton is, to an extent, its own nation, with devoted citizens both upstairs and down.

Reportedly, people have been living at the Highclere site for roughly 1,300 years. The castle as it stands today is the home’s third incarnation, built in place of an earlier house, which was itself erected atop the foundations of a medieval palace, whose owners, the Bishops of Winchester, stretch back to the 8th century. In the 1600s, the castle became home to the wealthy Carnarvon family, and it passed down through generations on the path to its current glory. The proceedings are straight out of a Downton Abbey shooting script: Attorney general Robert Sawyer passed a Highclere mansion to his daughter, Margaret, who wed Thomas Herbert, the 8th Earl of Pembroke, who bequeathed the estate to his second son, Robert Sawyer Herbert, who in turn passed Highclere on to his nephew, Henry Herbert, who went on to become the 1st Earl of Carnarvon. Henry’s grandson, 3rd Earl Henry John George, would be the one to perfect Highclere’s majesty, bringing in Sir Charles Barry to remodel and refinish the home in Bath stone, just after Barry had completed the whopping task of building the Houses of Parliament. At the time, the young Queen Victoria had just come into power, and once Highclere was at last completed in 1878, it became one of the Victorian Era’s foremost centers for political life.

Through the years, Highclere welcomed an impressive who’s-who of guests, including politicians, aviators, soldiers, scientists, inventors, and Egyptologists. The castle houses an Egyptian Exhibition, thanks to the exploits of 5th Earl George Herbert, an amateur Egyptologist who discovered the tomb of Egyptian Pharaoh Tutankhamun in 1922, and brought his interests home with him. There are some chapters of Highclere’s history that closely mirror the Downton Abbey narrative. For instance, during George Herbert’s ownership, Almina, the 5th Countess of Carnarvon, transformed the estate into a hospital during World War I, just as the characters make Downton a convalescent home during the same war in season two. Helping and healing hundreds (as many letters on record attest), Almina pulled a Lady Sybil (Jessica Brown Findlay) and became a skilled nurse. Later, during World War II, her spirit carried on, as Highclere housed young evacuees from north London. Calmer in its postwar days, the castle was occupied by the 6th Earl until his death in 1986, and to this day, it’s home to the 8th Earl and Countess of Carnarvon, who split their time between Highclere and another nearby home.

According to Hichclere Castle’s website, Fellowes is a longtime friend of the Carnarvons, and wrote Downton Abbey with the location in mind. Naturally, the phenomenon of the series has made the site a sought-after hot spot, with tours of the castle and grounds given regularly (Highclere is currently closed to the public, and reopens for Easter on March 30). Yes, viewers can relive their favorite scenes from the show, passing through the green-walled Drawing Room and red-carpeted Library just like Michelle Dockery and Maggie Smith. Downton Abbey, however, is not the only entertainment to have used Highclere as a backdrop. The main area of the Saloon appeared in the Heath Ledger vehicle The Four Feathers, and was a chief location for Stanley Kubrick’s Eyes Wide Shut (number two on Slant Magazine’s list of the best films of the 1990s). The castle was also featured in John Legend’s 2006 video for “Heaven Only Knows,” and the films A Sense of History, King Ralph, and The Missionary. But only Downton Abbey has given this stunning landmark the spotlight it deserves, showcasing it as quite possibly the grandest home in television history.

Review: The Following: Season One