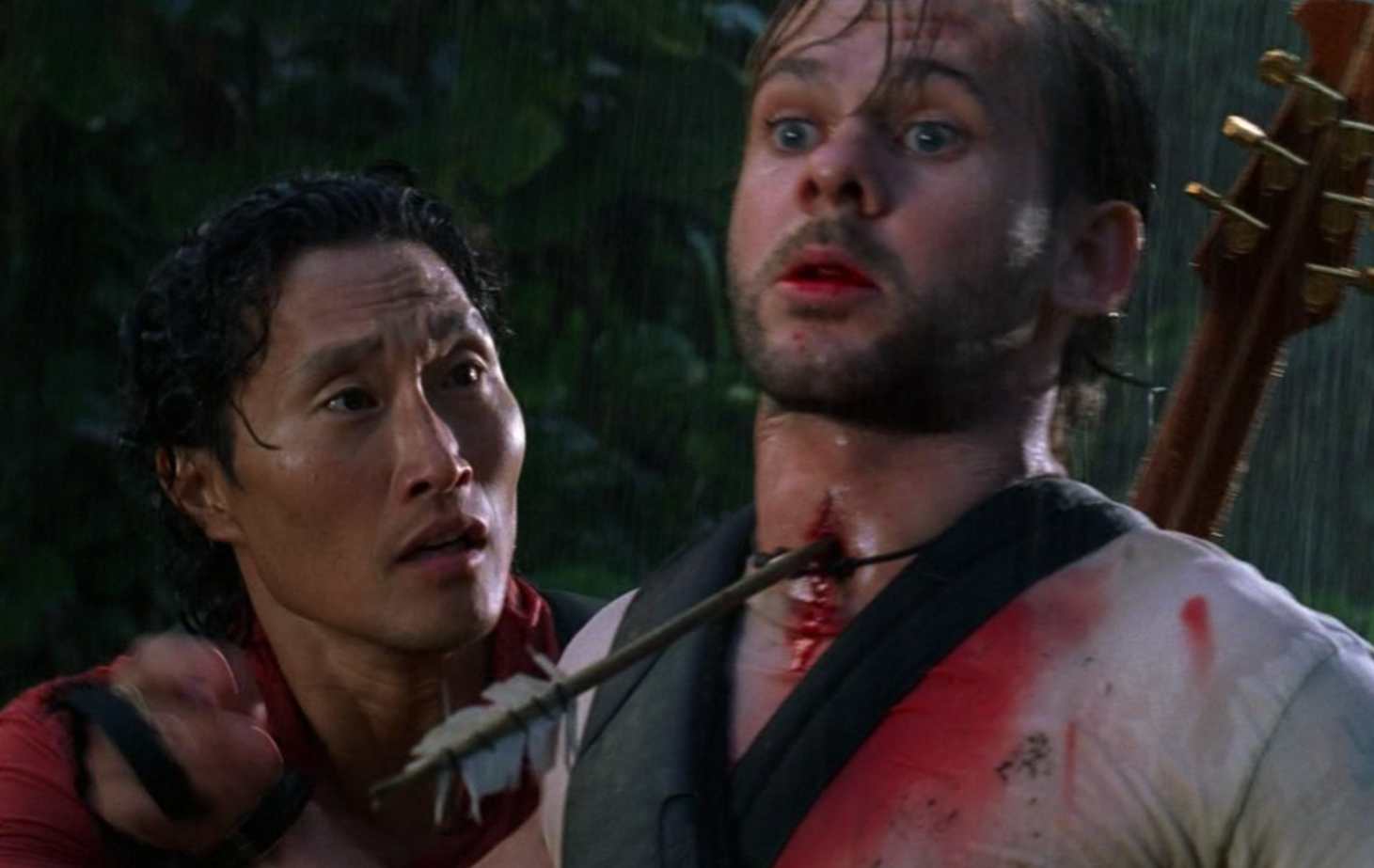 I’ve long contended that the writers of Lost use the show as the world’s most expensive message board, employing its very text to address fan concerns and critiques, often in the body of the same story that’s causing consternation. Apparently some of the writers have been known to blog, and executive producers Damon Lindelof and Carlton Cuse conduct regular podcasts on ABC’s website where they clear the air, but I’ve never quite seen the point. When you watch Lost you almost always have a pretty good idea of where everyone stands.

To wit, Lost doesn’t just name check the pop culture phenomena that have inspired and co-exist with it (most recently evident in the episode where Sawyer has to go around being nice to everyone or else he’ll be “voted off the island”). Occasionally, it seems to step outside of itself and offer reassuring nods to its viewership—no doubt one of the most savvy audience in all of television—that it has at least anticipated their eventual complaints. Arguably, that’s not quite as impressive when you consider how many corners the show has written itself into over the years, but they do say admitting you have a problem is the first step.

Last night’s episode, the first credited contribution by Y the Last Man creator Brian K. Vaughn and show veteran Jeff Pinker, was entitled “Catch-22” which refers in a general sense to the Sisyphean predicament Desmond (Henry Ian Cusick) has been placed in since surviving the hatch explosion at the end of last season. Cursed with the ability to witness glimpses of the future (in quick, detached flashes), Desmond is forever forestalling fate, specifically postponing the “inevitable” death of Charlie (Dominic Monaghan) for as long as humanly possible. Desmond firmly believes there’s no escaping destiny, only temporarily diverging from its path, meaning his concerted efforts to save Charlie is born out of either a sense of dogged stubbornness or a grudging affection for a character most viewers would happily see killed off.

Desmond’s role as Charlie’s protector is somewhat nebulous here, as he’s working towards an ultimate goal that must intersect with Charlie’s death (and judging from the flashes we see, a particularly nasty one at that: impaled by an arrow fired from one of Rousseau’s booby-traps). Desmond needs to follow a set chain of events in order to arrive at a specific outcome, yet he intends (or perhaps decides very late in the game) to change one of the steps in the middle, the hope being that he will still arrive at the same final destination. He is, in a sense, playing chicken with predetermination.

What would be worth marching Charlie off into the middle of the jungle, needlessly risking his life? For Desmond, it’s a reunion with his beloved Penny (Sonya Walger) whom he’s convinced will be making an appearance on the island, literally falling from the sky. Desmond’s fervor is ultimately misplaced though, as he draws hasty assumptions that are helped along by familiar and heavily-weighted imagery from his past. His visions are accurate to a point, but the visitor from the sky, having ejected from a faltering helicopter (something Hurley points out is impossible), is not Penny but rather a young woman (Marsha Thomason), likely part of the rescue mission meant to recover Desmond.

Tellingly, the alleged helicopter crash remains shrouded in mystery, playing out under cloak of darkness, with the wreckage falling quietly into the sea. We hear the craft laboring, but its actual crash struck me as entirely too small in scale to accept outright (unless of course this is merely a budgetary issue). Hurley’s not the only one who’s detecting a few discrepancies here. For starters, it doesn’t make sense that a helicopter would plummet into the ocean, its pilot sent miles inland when, as Hurley states, such crafts lack ejector seats. The pilot’s jumpsuit and aviation helmet is also more in line with that of a fighter pilot than that of someone operating a chopper. Then there’s the question of what a helicopter would be doing this far out in the middle of the ocean. Wouldn’t it have to take off from an aircraft carrier or some other base of operations? If this show has taught us anything it’s that nothing should be taken at face value.

When describing the mechanics of his bizarre “gift” to Hurley, Desmond informs him that it’s like assembling a puzzle without having the box artwork to serve as a guide. This struck me as either a curious bit of self-analysis from the show or a dig at its many skeptics. One of the most common critiques of Lost is that it appears to have a sense of where it’s ultimately going, but the connecting incidents in getting there are arrived at haphazardly. It returns to well-trod themes and plot devices, twiddling its thumbs with digressions and go-nowhere subplots, relying on flashbacks that could be charitably categorized as time-fillers first, character-development second. And frankly, at what point does the litany of bad fathers, con-artists and dead pretty young women reveal more about the hang-ups of the writing staff than the over-arching themes of the show?

And yet doesn’t the possibility exist that it’s Lost’s alleged grand design that is being discovered along the way, with the show, like Desmond, no more than a handful of plot twists ahead of everyone else. Surely J.J. Abrams could not have anticipated every bizarre direction, every seemingly impossible connection, and every unexplainable island artifact that would surface in the show when he developed the pilot. Could the show foresee Desmond, a character who was not introduced until the second season, yet is ultimately revealed as the inadvertent cause behind flight Oceanic 815’s crash landing? Or, like the character it created, is Lost simply looking for what comes next?

“Catch-22” also refers literally to the famous Joseph Heller satire which is given a visual shout-out, albeit obliquely, a copy of the book having fallen from the sky along with the mysterious woman, its title translated into Portuguese (which is incidentally the same language spoken by the Antarctic researchers at the end of season two). I’ve always come to use the expression “catch-22” to mean a no win situation, which is really the perfect way to describe engaging with Lost on a week-by-week basis. The sheer breadth of the show’s mythology and accumulated evidence is counter-intuitive to passive viewing (by comparison, charting something as Byzantine as The X-Files feels like child’s play), yet each new tantalizing theory seems to contradict a dozen others. I feel like I spend half my Wednesday evenings wiping egg off of my face.

“Catch-22” briefly addresses one of my favorite pet-theories, first introduced in the episode “Flashes Before your Eyes” from last February. I speculated then that Desmond’s adventure in time travel was actually a lucid dream meant to justify a lifetime of poor choices, specifically using his own low sense of self-worth to run away from the woman he loves. While the episode is taken by most at face value, something about the way Desmond engages with his own psyche, the way fate can be conveniently substituted as a scapegoat, struck me as very David Chase-like. The lightning rod at the center of this theory is Ms. Hawking (Fionnula Flanagan) who makes a brief, uncredited cameo in last night’s episode, appearing in a picture frame during Desmond’s flashback. This would seemingly refute my theory (she is in fact, a real person as opposed to a creation of Desmond’s mind) while also lending credence to my belief that Desmond is digging deep into his subconscious, recalling a kindly old woman from a photograph to give voice to his feelings of doubt and defeatism.

As to this week’s flashback, there’s scarcely little of it worth mentioning. Of all the chapters in Desmond’s history that have yet to unfurl themselves, I have to believe this is the least pertinent of them. Taking place prior to his involvement with Penny (and six years before he arrives on the island) the episode finds Desmond in training to become a monk with predictably disastrous results. The episode takes the long way around to reaffirm that Desmond has a history of running from his problems rather than facing them head on, even going so far as giving him a former fiancée (Joanna Bool) who he can hide from in a monastery rather than confront with his anxiety over their relationship. The flashback concludes with Desmond’s meet-cute with Penny, which is, as far as I’m concerned, where his story begins.

It’s worth noting that five episodes remain in the season (representing six hours of programming). It has only recently struck me just how long the season is, which might explain why the show has had such difficulty maintaining momentum; a show of this nature requires the urgency and constraints of a shortened season (such as the dozen or so episodes HBO typical allots to its programming). Season three began with the cast scattered to the wind, only finally coming together in the past few weeks. Yet the show now feels more disjointed than ever, with a format that’s so A-storyline heavy it can go months without addressing what some of its principle characters are up to (anyone else curious what Locke has been up to with his dad?) With Desmond’s “camping trip” with Sun (Daniel Dae Kim), Hurley (Jorge Garcia) and Charlie taking center stage, last week’s tempest in a teapot regarding Juliet (Elizabeth Mitchell) and her ulterior motives in joining the castaways was pushed way into the background . In fact, Juliet’s sole purpose this week was to flirt with Jack (Matthew Fox) making Kate (Evangeline Lilly) jealous to the point that she throw herself at Sawyer (Josh Holloway) like a drunken prom date. This show has way too many hours to eat up in a season, forcing it to apply the breaks or take a detour lest it wrap itself up too quickly. As with anything, it’s best to leave people wanting more.