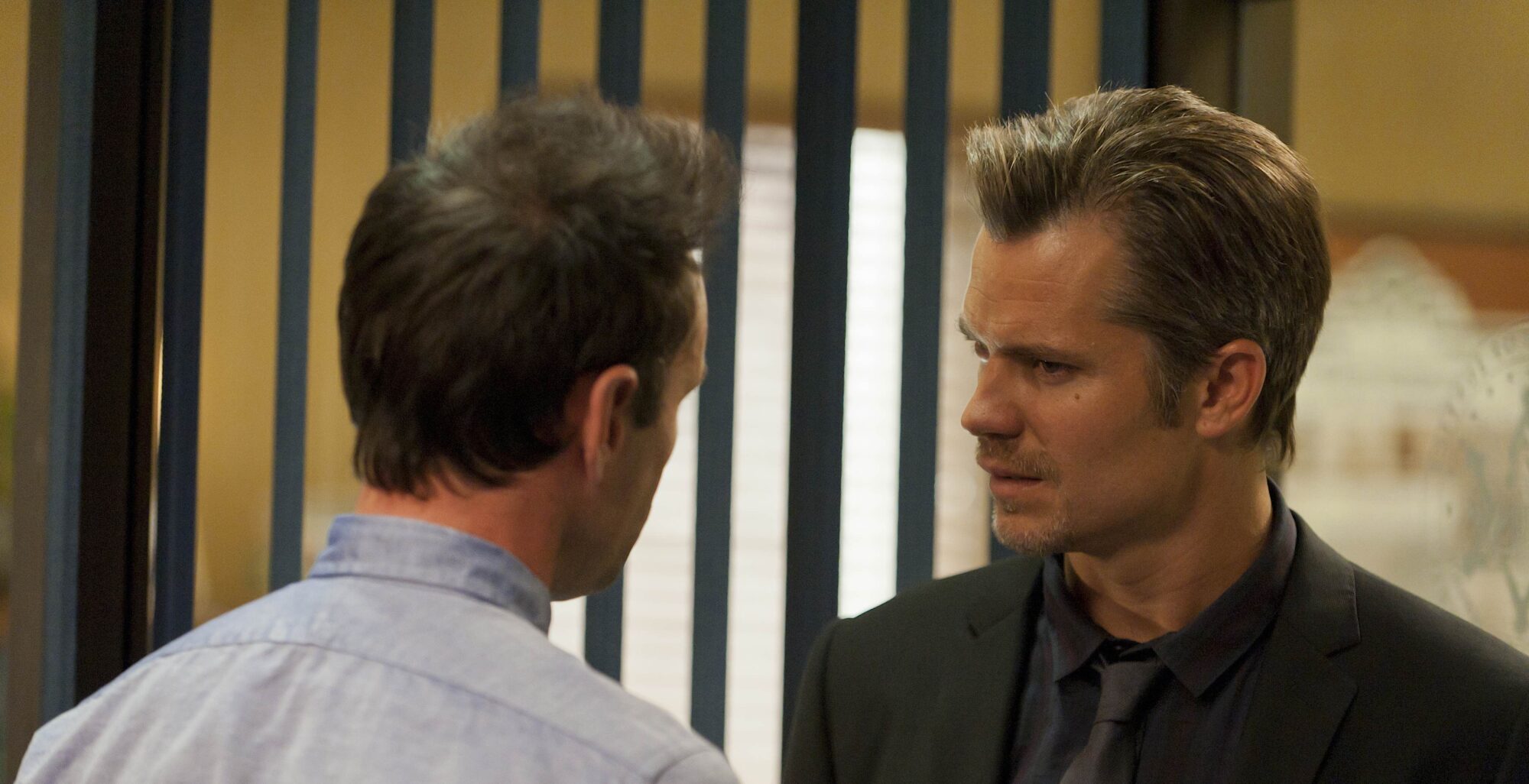 The unexpectedly saddening yet morally satisfying departure of Harlan County’s Moonshine Queen, the malevolent Mags Bennett (Margo Martindale), at the conclusion of Justified’s sophomore season raised the question of who could possibly be magnetically evil enough to take her place as the lead criminal kingpin in east Kentucky’s harshly segregated borderlands. Just how does a television series go about replacing one of the most memorable antagonists of the past decade? Instead of substituting one star evildoer with an inevitably less charismatic one, Graham Yost and the show’s team of adept writers have opted to unleash a multipronged assault of equally loathsome villains, some familiar and some less so, some working together and some with a searing lone-wolf mentality, bearing down on Deputy Marshal Raylan Givens (Timothy Olyphant) from all directions.

Justified has been a fine place for great character actors to showcase their A games, and that tradition holds strong in season three. The often underappreciated Neal McDonough puts on an astonishingly entertaining blue-eyed-devil routine as Robert Quarles, a lethal jewel in the cracked crown of the Detroit mob who sees an opportunity to take over the Dixie mafia’s Oxycontin territories following the Black Pike fiasco. Quarles is nearly the antithesis of Mags in every aspect: Sharply dressed and touting his affluence and intelligence at any given moment, he doesn’t mind getting his hands dirty. Whereas Mags’s murder method of choice was the hands-free, tender moonshine poison, Quarles goes straight-up Taxi Driver, rocking a Travis Bickle-style hidden gun on a concealed track under his sleeve. A cross between Pulp Fiction’s cool, collected Winston Wolf and the eternally on-edge Hades from Disney’s Hercules, Quarles gives the appearance of steady normalcy, yet there’s a whole horde of unchained demons hiding beneath his expensive suit.

If McDonough’s deceitful Quarles isn’t enough, a second, no less slyly frightening malefactor is introduced. Mykelti Williamson, famous for his role as Tom Hanks’s goodhearted, shrimp-obsessed army buddy Bubba in Forrest Gump, plays Ellstin Limehouse, the very personification of deceptive vileness. His very first scene is a lengthy, artfully blocked, and terrifically written monologue in which he states his love and pride for his people, the denizens of one Noble’s Holler (home to the ancestry of slaves emancipated following the Civil War), all the while threatening to burn a man’s hand down to the bone by sticking it in a potent blend of highly corrosive alkaline lye. The man in question is one of Limehouse’s own workers, identified as close-knit family, who forgot to properly sentry the bridge leading into the Holler. This act of hurting those closest to us in order to bring them closer echoes the familial-bonding tactics of Mags, who only hesitated and grimaced as she broke her son’s fingers with a ball-peen hammer, then hugged him.

Although the revamped, reorganized movement of weed and Oxycontin throughout Harlan is the central motivation for much of the lawlessness and sudden bloodshed throughout season three, the story arc that kicks things off involves the supposed $3 million Mags left behind. The Boyd Crowder (Walton Goggins) of old is back in full badass-antihero mode, with his girl Ava (Joelle Carter), the Bonnie to his Clyde, slowly aiming to reclaim whatever infamous bounty the Crowder clan has coming to them. The Mags’s-money plotline masterfully brings together Boyd’s crew, featuring Raylan’s farther, Arlo (Raymond J. Barry), Limehouse’s camp, an incarcerated Dickie Bennett (Jeremy Davies), the dimwitted Dewey Crowe (Damon Herriman), and Raylan, along with fellow marshal Rachel Brooks (Erica Tazel) in a string of energetic scenes boasting some tremendous acting and increasingly clever dialogue that truly carries the lively spirit of author Elmore Leonard’s original work. With more skill than most similar series, Justified takes clichéd action sequences and transforms them into intense, edge-of-your-seat affairs essentially by, instead of holding back for as long as possible to create delayed suspense, allowing its characters to act naturally, as we have come to know them, pulling the trigger at unexpected moments, resulting in drastically high, concurrently believable body counts.

Raylan is a man of very few weaknesses, but nevertheless possesses a perpetual soft spot for tough women who double as damsels in distress. Carla Gugino reprises her role from another Elmore Leonard adaptation, Karen Sisco, though her last name is changed to Goodall here. Raylan’s old flame from his days in Miami, she drops in on the case-of-the-week episode “Cut Ties,” and the heightened chemistry the two have on screen is undeniable; hopefully Raylan can keep his dick in his pants, because he’s inching ever-closer to fatherhood. Winona Hawkins (Natalie Zea) remains the woman who simultaneously keeps Raylan on his toes and a wholly humane, well-rounded protagonist. Now pregnant, she sparks in Raylan the ample desire to part ways with the countless dangers of Harlan and start a new life elsewhere; every gunfight Raylan gets himself involved with carries more weight this season, as he’s now expected to assist in the raising of a forthcoming child. The theme of bloodlines newly woven and long-kindred continues to run through Justified like an un-damable river, with every character fighting to carve out a place where they can exist among those they cherish and trust. In the case of many, though, including Raylan, that number can be easily, despairingly counted with the use of one hand.