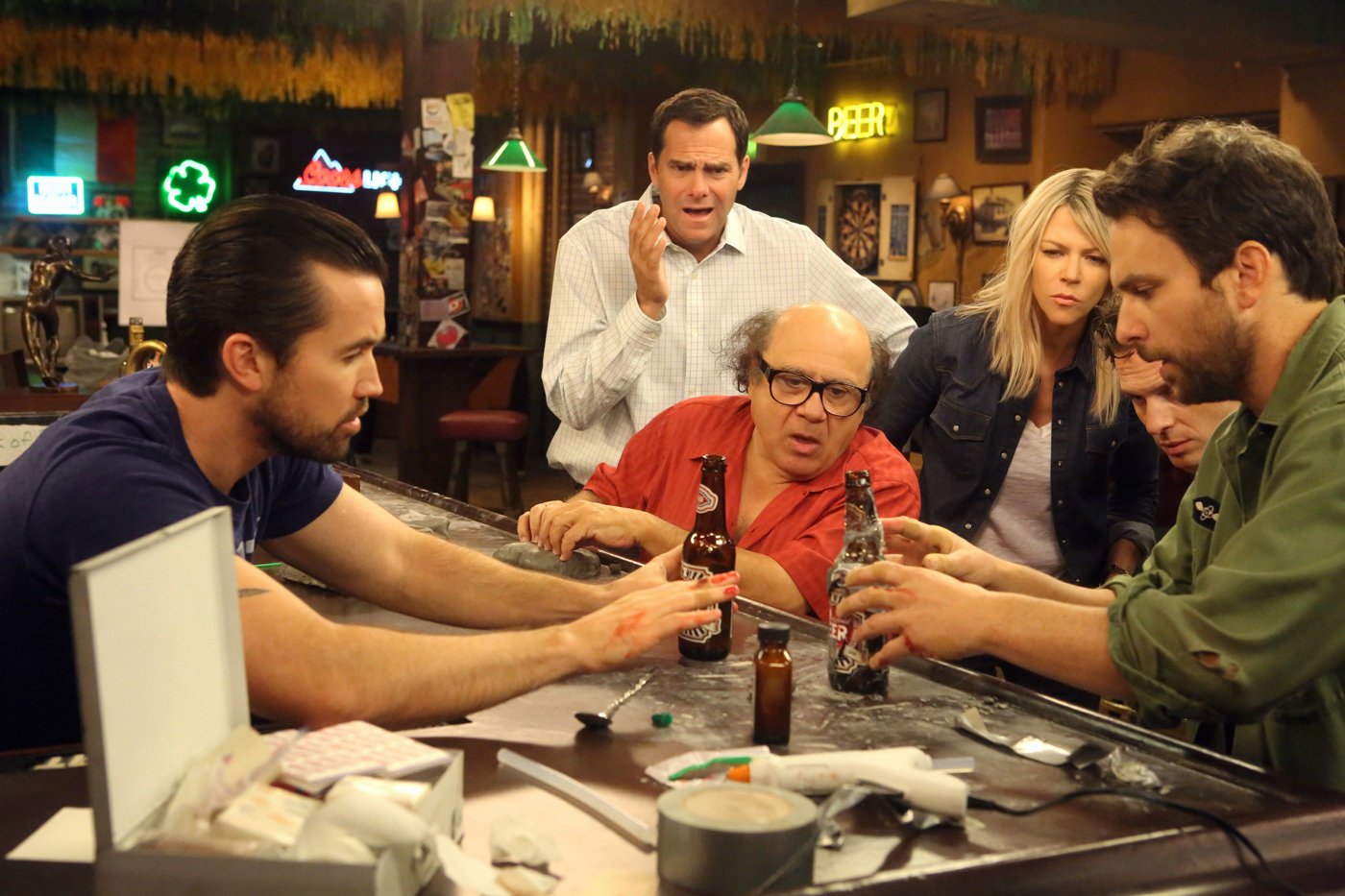 There’s a reason that It’s Always Sunny in Philadelphia takes place in a squalid bar and not an idyllic suburban home: The latter represents the fantasy of the American dream, while the former is where pipe dreams are nursed with a pitcher of cheap beer. Despite its cheerful title, Sunny is a pitch-black comedy, one that reflects many of America’s problems (exploitive commercialism, gender inequality) as if through a distorted funhouse mirror. In the show’s 11th season, the quarrelsome quintet of antiheroes at its center finds new extremes to satirize said issues as they pollute highbrow locales (like a classy ski lounge in the Poconos and a misery-filled art exhibition) with their lowbrow interests (crack, smut).

Instead of simply resting with the physical comedy of Frank (Danny DeVito) hitting his head and thinking he’s back in 2006, the series uses the scenario as an opportunity to prove that even if the gang got a second chance at a situation they previously bungled, they would merely repeat the same mistakes, albeit in new ways. Writer David Hornsby returns to scripts from a decade ago (“Charlie Got Crippled” and “Dennis and Dee Go on Welfare”) to amplify the comic effect of Frank’s amnesia with a haunting déjà vu. Moreover, with Frank literally repeating 10-year-old lines, it’s easier than ever to see how the cast’s chemistry has developed over the years, with their wicked barbs flying faster and looser than ever before.

The sheer ambition to find new storytelling highs in order to ground these lowest of the low characters is most apparent in an episode like “The Gang Hits the Slopes,” a note-perfect send-up of ‘80s bro-fest comedies like Porky’s and Animal House. But it’s also present in the appropriately titled “Chardee MacDennis 2: Electric Boogaloo,” which speaks to how extreme the gang has to get before even considering a sequel to their drinking/board “game of games.” It’s not enough, then, for Sunny to use an idea just because it’s funny: The show’s creators only return to Chardee MacDennis because it allows them to call out the game’s—and by extension, the show’s—own insanity. It’s also a great way for the writers to clarify that they’re not at all apologetic for their shock humor, be it Frank’s swastika-like flag, mainlining alcohol through an IV drip, or using “dated” Bill Cosby jokes.

It’s precisely because of how exaggerated and savagely sophomoric Sunny seems that it’s able to sucker-punch the audience with all its satire. The denouement of the ‘80s-parody episode clarifies the show’s feminist stance when it reveals that a group of “eagerly” topless women were actually hired by Frank to distract skiers while he fracked the mountain beneath the slopes. A lecherous, dick-flashing ski worker is finally (and rightfully) hauled away after a lengthy beating by the police, and viewers are left to contextualize the explicit—and probably exploitative—sex scene between Charlie (Charlie Day) and the way-out-of-his-league Tatiana (Natasha Alam).

For all the ambition and exaggeration of these episodes, however, it’s the subtle “Mac & Dennis Move to the Suburbs” that best summarizes Sunny’s approach to its “golden” years. A warm, inviting suburban atmosphere has long been a staple of American sitcoms, and Sunny instantly corrupts it, calling out the casual camaraderie of Cougar Town’s “cul-de-sac crew” as the unrealistic sham it is. Instead, the episode all but unleashes Dennis’s (Glenn Howerton) inner American Psycho during his daily commutes to the city, while Mac (Rob McElhenney), depressed, attempts to maintain the home, struggling against the sort of mundane inhumanities on display in Six Feet Under.

One man’s American dream is another man’s junk: Each unhappy family is unhappy in its own way. This suburban hellscape of normalcy and complacency is what Sunny is rightfully running from, and that momentum is helping to make the series better than ever. Here comes that savage scorn, ripping apart the civility that might fence it into the predictable patterns and conventions of—gasp!—a sitcom.