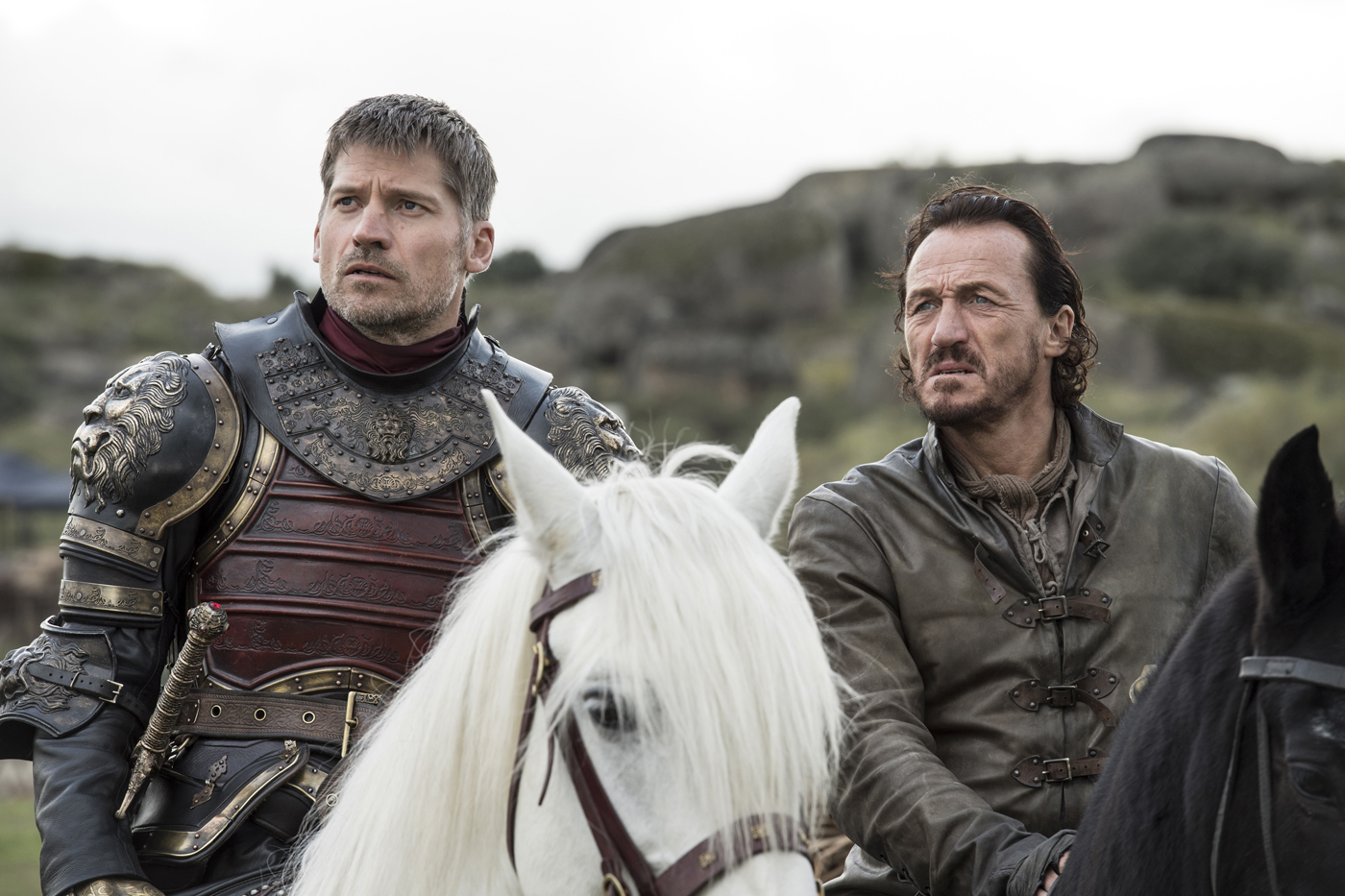 As epic and satisfying as it is to finally see dragons and Dothraki face off against the Lannisters outside of King’s Landing, the more important battle of “The Spoils of War” is between Game of Thrones’s two types of storytelling. The first, which plagues the episode’s first 20 minutes, is the stuff of pure exposition: tactical discussions, cryptic premonitions, and theory. At best, the language occasionally crackles in the right hands, as with the way in which Mark Gatiss cloyingly portrays the Iron Bank’s representative, Tycho Nestoris. “Arithmetic, not sentiment” makes for the sort of too-calculated approach that can swamp an episode before it even begins. It’s not much better when Jon Snow (Kit Harington) invites Daenerys Targaryen (Emilia Clarke) to view the obsidian tunnels beneath Dragonstone. Sure, there are cave drawings that show the Children and the First Men fighting together against the wights, but that convenient bit of ancient history simply isn’t compelling.

Things worsen when we shift to Bran Stark (Isaac Hempstead Wright), who’s disinterested in everything happening before him. Littlefinger (Aidan Gillen), that master provocateur, presents Bran with the Valyrian steel dagger that an assassin once tried to kill Bran with, and all he gets is Bran quoting a line that Littlefinger once spoke: “Chaos is a ladder.” Even Meera Reed (Ellie Kendrick), who almost died protecting Bran (and whose beloved brother, Jojen, did die for him) can’t get a rise out of Bran when he unemotionally bids her farewell. He remembers too much to be sympathetic to specifics; what’s one death compared to all the others he sees as the Three-Eyed Raven? (The removed perspective of a historian is also dangerous for Game of Thrones, as the slapdash sequence at Casterly Rock in “The Queen’s Justice” proved.)

Thankfully, Game of Thrones has a second and more active form of storytelling, and that’s the one that occupies the majority of “The Spoils of War.” In many cases, this involves cashing in on long-gestating threads, like Arya Stark (Maisie Williams) finally making it back to Winterfell and her long-lost family, including Sansa Stark (Sophie Turner) and Bran. With the exception of some shallow comedy involving two guardsmen attempting to turn Arya away at the gate, her story is grounded so much in the immediate that the reunited sisters deliberately avoid rehashing their difficult pasts and instead acknowledge that they choose what defines the remainder of their unfinished stories. This is the complete opposite of what Bran offers with his predictions and predestination—to say nothing of the fact that watching Arya train against Brienne of Tarth (Gwendoline Christie) is a lot more engaging than seeing Bran listlessly mope around in his wheelchair.

Sometimes Game of Thrones overreaches in its attempts to be grounded in the present; the moment in which Jon and Davos Seaworth (Liam Cunningham) learn from Missandrei (Nathalie Emmanuel) why people are so loyal to Daenerys would be better without making Jon into a Bernie Bro who worries that bending a knee to Daenerys Rodham Targaryen would just invite “more of the same.” Keeping the focus on people and their emotions is far more effective, and it sells Missandrei’s message: Daenerys was chosen by her army based on her deeds and not based on her birth.

More importantly, “The Spoils of War” puts its money where its mouth is, showing, instead of telling, just what sort of a leader Daenerys is. She doesn’t spend a lot of time analyzing those hieroglyphics: She tells Jon that she’ll help him as soon as he swears loyalty. She doesn’t return to her war room to talk strategy; instead, after Tyrion Lannister (Peter Dinklage) breaks the bad news about the defeated Tyrell forces, she makes a call about whether it’s now appropriate to invoke the nuclear option (dragons) against the Red Keep and its innocent bystanders. One moment she’s in Dragonstone; the next, she’s heeding the late Lady Olenna’s advice (“Be a dragon”) and is leading her Dothraki hordes into battle against Jaime Lannister (Nikolaj Coster-Waldau) and the army that he’s stretched thin in an effort to transport gold and supplies from the recently sacked Highgarden back to King’s Landing.

This battle, which uncompromisingly rages on for just over 10 minutes, also justifies a lot of earlier, seemingly innocuous conversations from other characters, like the experienced mercenary Bronn (Jerome Flynn) and knight Dickon Tarly (Freddie Stroma). In the calm before the storm, they’re in fact discussing the juxtaposition between the sort of orderly fighting that the well-educated “fancy boy” Dickon learned and the actual reality of war, which the street-smart Bronn learned through actual experience. All that talk about the smell of war—as dying men shit themselves—and how actual combat isn’t always against faceless, unknown adversaries comes immediately into play as Dickon, Bronn, and Jaime attempt to hold the line against the rule-breaking Dothraki and a dragon. Tyrion most likely speaks for the majority of the audience when he wistfully hopes that brother Jaime will flee the carnage.

Game of Thrones works perfectly fine out of battles, but it has to work so much harder in those moments not to be distracted by overly clever comparisons or laborious plot mechanisms. Combat distills everything down to the most essential sort of storytelling. When Bronn’s horse is cut out from under him and his newly acquired gold purse goes tumbling to the side of the road, his motivations don’t need any weighty dialogue: Money is important but not nearly as important as his life. Later, when Bronn manages to tumble through a maze of charring flesh-and-iron bodies toward the Scorpion ballista, we know what both he and Daenerys are thinking as they lock on one another as targets. Jaime glimpses a lance left impaled in a corpse, sees Daenerys tending to her grounded dragon’s wound, and what comes next may be obvious in hindsight, but it plays out in a vivid, surprising way—as Bran could never hope to tell it. There’s nothing spoiled here, no random segues to Oldtown or to preparations along the Wall. In war and through violence, Game of Thrones is as clear and compelling as it gets.