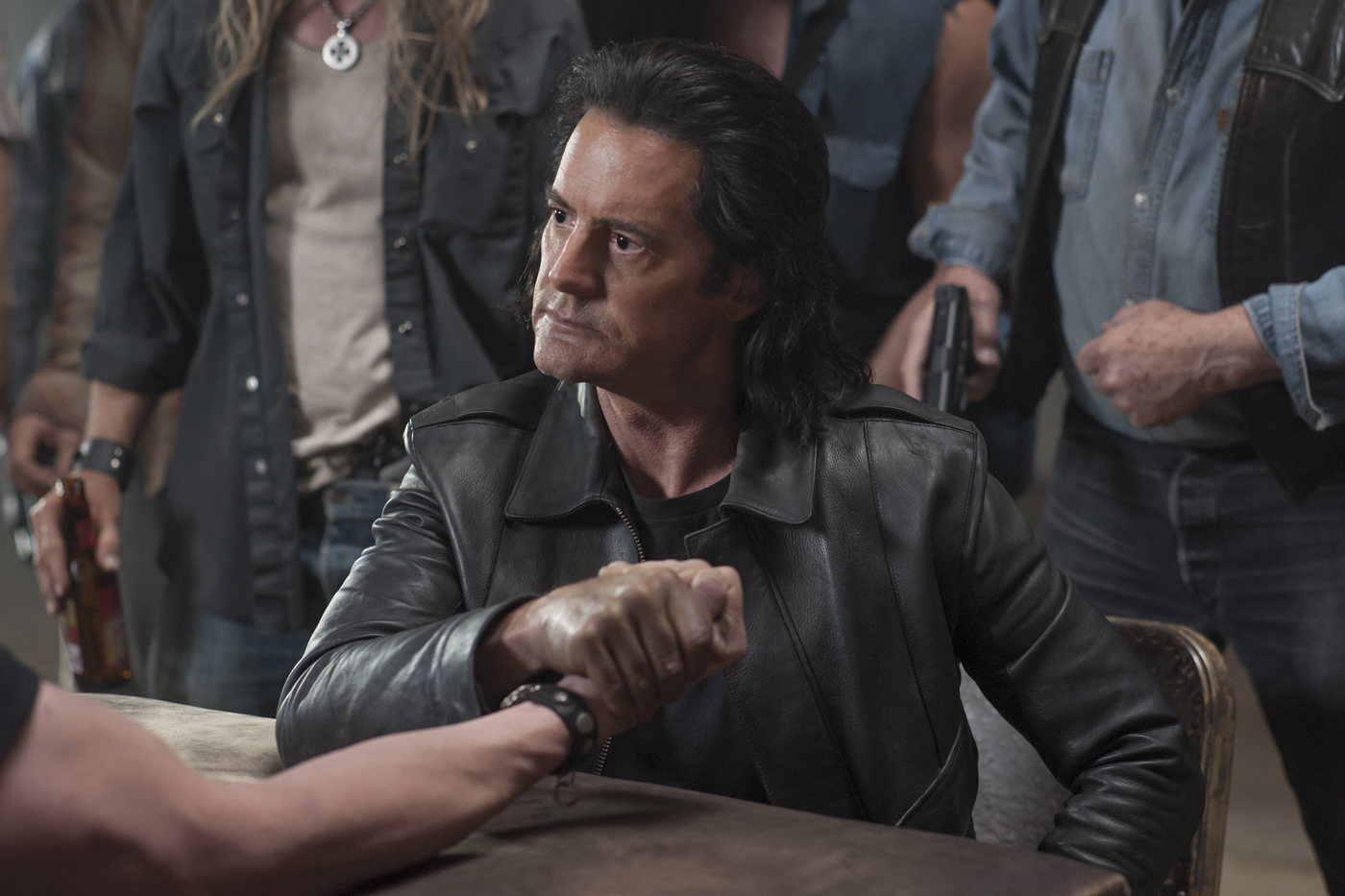 Last night’s episode of Twin Peaks: The Return testified to the life-affirming power of cherry pie, gave viewers an object lesson in Existentialism 101, and suggested, in suitably surreal fashion, that the more things change, the more they stay the same. A recurrent leitmotiv in the show’s iconography, cherry pie signifies David Lynch’s unabashed embrace of old-fashioned Americana, a deep-running feeling of kinship and respect for the salt-of-the-earth denizens of the country’s outlying and often overlooked small towns. In “Part 13,” a damn good slice of cherry pie plays a pivotal role in several storylines.

The lure of cherry pie draws Cooper (Kyle MacLachlan) away from his sit-down with Lucky 7 co-worker Anthony Sinclair (Tom Sizemore), giving Sinclair the chance to dump poison in Cooper’s coffee, a clever inversion of the life-saving role the pie played in his desert rendezvous with the Mitchum brothers in “Part 11.” Of course, Cooper’s distractibility also misleads Sinclair into a full confession. Spilling the beans to their boss, Bushnell Mullins (Don Murray), Sinclair sums up his newfound contrition by saying that he either wants to change his ways or die. His blunt existential alternative also seems to extend to every other character in the series.

Back in Twin Peaks, Shelly (Mädchen Amick) inveigles Becky (Amanda Seyfried), distraught over not having seen Steven in two days, with the prospect of some cherry pie. It’s pretty clear from Becky’s childlike reaction (akin to a Proustian madeleine dipped in tea) that the idea of consuming this comfort food recalls earlier times of contentment and safety. These are, to say the least, qualities now sorely lacking in her violent, chaotic home life.

Pies are also on the table, figuratively speaking, during the powwow between Norma (Peggy Lipton) and her business partner, Walter (Grant Goodeve). Norma, as it happens, has parlayed the Double R into a franchise. But the flagship diner hasn’t been turning a sizeable enough profit, largely because Norma’s a stickler for quality ingredients. Walter cautions her: “You cook with love. Love doesn’t always turn a profit.” That’s a perfect metaphor for the almost uniformly lovelorn denizens of Twin Peaks, judging by the longing glances poor displaced Ed Hurley (Everett McGill) keeps casting at Norma.

Topicality isn’t necessarily Lynch’s strong suit, but this isn’t the only instance where “Part 13” emphasizes the David-and-Goliath struggle between small-business owners and corporate overlords. Jacoby (Russ Tamblyn) and Nadine (Wendy Robie) finally meet cute over the gold “shit-digging” shovel she showcases in the window display of her (hilariously named) store Run Silent, Run Drapes. After commiserating over their respective limited liability concerns, Jacoby gloomily predicts: “It’s us against them.”

This palpable sense of pugnaciousness is literally enacted in the showdown between Bad Dale (MacLachlan) and Ray Monroe (George Griffith) that’s been on the horizon since Ray left the doppelganger for dead back in “Part 8.” But before Mr. C can get to Ray, he has to face off against gang boss Renzo (Derek Mears) in the tensest arm wrestling match since The Fly—and Lynch even arguably one-ups David Cronenberg in the resultant gore.

Narratively, this scene exists primarily to put the much-sought-after coordinates found on Ruth Davenport’s arm, which we now know lead straight to Twin Peaks, in Bad Dale’s hands. But it’s a bravura bit of storytelling for all that, with abrupt bursts of comedy leavening the eruptions of violence. Late in the game, Richard Horne (Eamon Farren) arrives on the scene, indicating an impossibly tangled skein of criminal conspiracies afoot across the entire Pacific Northwest, as well as further emphasizing the potentially paternal connection between the doppelganger and Richard.

The medium for that link is likely Audrey Horne (Sherilynn Fenn). As Doc Hayward revealed in “Part 7,” Cooper paid a visit to a comatose Audrey in the ICU after his sojourn in the Black Lodge. It’s now quite probable that her scenes are actually taking place within her comatose state. That would perfectly explain their bizarrely stagey staging, as well as Fenn’s hyperbolic acting, broad even for this series. Audrey’s existential crisis (“I’m not sure who I am, but I’m not me”) might indicate her divided consciousness, remaining trapped within her nightmarish coma-induced headspace, while still aware on some level of what’s going on around her in the real world.

Salient details point to this: The reference to The Little Girl Who Lives Down the Lane, a 1976 film in which 13-year-old Jodie Foster successfully fends off the sexual depredations of a twentysomething played by Martin Sheen, might stand as a sort of wish fulfillment about what happened in that ICU room. Her comment about Ghostwood points to a memory of the event that put her in the coma in the first place, the bomb blast inside the back vault from “Beyond Life and Death.” Indecisiveness over which story she wants to believe, or live in, shows that she may be struggling to surface to full consciousness.

Audrey isn’t the only one experiencing a kind of fugue state. After last week’s freak-out in a grocery store, we pick up with Sarah Palmer (Grace Zabriskie) putting the finishing touches to her stock of booze. On the television screen, there’s footage of an old boxing match. (Could it be Bushnell “Battling Bud” Mullins in action?) Every few seconds, there’s a sputter of static, and the program resets itself. Sarah appears to exist in her own tape loop, bustling about, stubbing out cigarettes, pouring a drink. Both Audrey and Sarah seem stuck in their own private ninth circle of hell, an eternal return of the same, per the philosophy of Friedrich Nietzsche.

Lynch, of course, is perfectly free to ring any changes he chooses on this doctrine of endless similitude, but it nevertheless invites a fascinating question: What if this show isn’t about change at all? What if it’s about, as Nietzsche would have it, accepting in the very fiber of your being the notion that nothing ever really changes? Maybe Cooper as Dougie never miraculously morphs into the Cooper of old. Like the ancient Greek philosopher Heraclitus once said: “You can never step into the same river twice.”

You can, though, listen to James Hurley (James Marshall) once again croon “Just You and I” in his hideous falsetto. He turns up on stage at the Roadhouse to reprise the recording he first made way back in the second-season opener “Coma.” Nowadays he’s assisted by anonymous brunette backup singers; in the past, he relied on Donna and Maddy for support. Whether his appearance here anticipates anything beyond a limited regional renown for the James Hurley Trio, it does go to show that some things hurt just as much the second time around.

Interview: Ann Dowd on The Handmaid’s Tale and The Leftovers

Game of Thrones Recap: Season 7, Episode 4, “The Spoils of War”