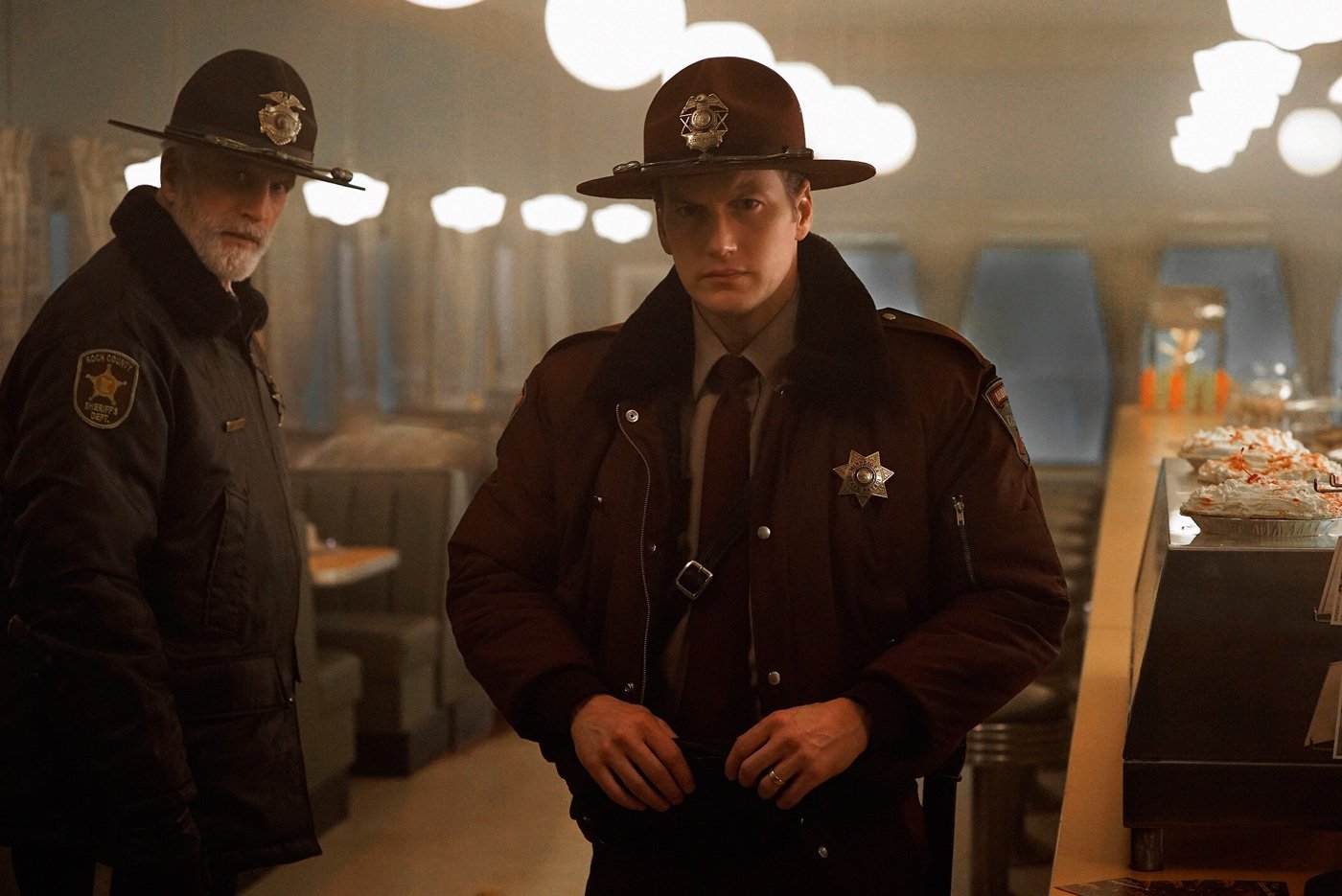 The second season of Fargo kicks off with an explosion of violence, just the sort of iconic red blood against pristine snow that lovers of the Coen brothers film will recognize. However, showrunner Noah Hawley already showed in the first season that he isn’t content to simply reference his source material. While he does once again make some cute tips of the hat to the 1996 film, such as the casting of lookalikes in supporting roles, Hawley’s aim is broader and deeper, and as a result he supersedes the show’s strong inaugural season both in terms of narrative complexity and storytelling sophistication.

Season two moves back to 1979, and by doing so craftily draws on the ennui of the time in order to tell a story of small-town Minnesotans at the crossroads between the weariness of the late 1970s and the nostalgic but empty coiffure of the Reagan era. Setting the story in the last year of the Carter presidency and using vintage video footage of his famous “malaise” speech in the opening-credits sequence, Hawley capably sets the gritty and unsettled tone for the rest of the season. As a group, the characters are mad as hell and they aren’t going to take it anymore. At the same time, this largely Scandinavian stock plays things pretty close to the vest. Stoicism trumps emotionalism, and violence, threatened or executed, is their ultimate form of expression.

Further announcing Hawley’s determination to up the ante is his use of the visual tropes of 1970s filmmakers such as the deployment of split screen at the beginning of every episode, and the grainy vérité-style cinematography that often attended the work of the decade’s grittiest filmmakers (Scorsese, Peckinpah, Boorman). Narratively, the story opens up as well. The landscape is vast, populated by a wider array of characters and driven by a more complex plot, which centers on the attempt by the Kansas City mafia to take over the successful local Gerhardt operation.

Jean Smart, simultaneously controlled and passionate, is a particular standout: As the matriarch of the Gerhardt clan, she must control her impulsive, violent sons, while cleverly navigating negotiations with the Kansas City crew. In this incarnation of Fargo, evil isn’t just expressed haphazardly or ineptly through accident or spontaneous acts of violence, as was the case in the original film, and to a great extent the first season of the series, but systemic, attacking the heart of the country, both from the inside (the local Gerhardt clan) and out (the encroaching Kansas City mafia).

Caught in their crosshairs are the clumsy but good-hearted butcher, Ed Blomquist (Jesse Plemons), and his wife, Peggy (Kirsten Dunst). Plemons, who looks to have gained a couple of dozen pounds for the part, is particularly convincing in the role of a man trying to please his showcase wife, while desperately and somewhat naïvely clinging to his corner of the American dream. After a bizarre accident puts the couple in the crosshairs of both the Gerhardts and the mafia, Ed and Peggy must paddle madly to stay afloat in a quagmire of moral compromise. Plemons exudes both a basic decency and an essential stubborn cluelessness as to the depth of the shit he’s stepped into. It’s clear that bad things are going to happen to these generally good people mostly through little fault of their own. Such is the way of this world.

Trying to stem the impending tide of violence are state and local authorities Lou Soverson and Hank Larsson (Patrick Wilson and Ted Danson), the former being the only character to reappear from season one (there played by Keith Carradine). Each episode has at least one incredibly tense and often awkward set piece centering on these lawmen confronting the sinister type who move in and around the town, and while outward displays of calm may impress the audience, the show’s made men always seen to have a leg up on the peace keepers. Of this group of thugs, first among his peers is Bokeem Woodbine, who’s equal parts charming and creepy as Mike Milligan, lead man for the KC mob. There’s a creeping sense of inevitability about the ultimate showdown between these two forces, and one gets the feeling we’ll soon learn why, some 30 years down the road, Lou walks with a decided limp.

Fargo expresses a worldview that’s bleak, if not entirely cynical. It is, after all, a world where the lines between good and evil are clearly demarcated, and the audience is given decent people to cheer for. Unfortunately, it’s equally clear that these fine people, despite their competence and intrinsic decency, are outmanned by their sinister opposition. The series is many things, including an astute harbinger of things to come in Reagan’s America.

Doctor Who Recap: Season 9, Episode 3, “Under the Lake”