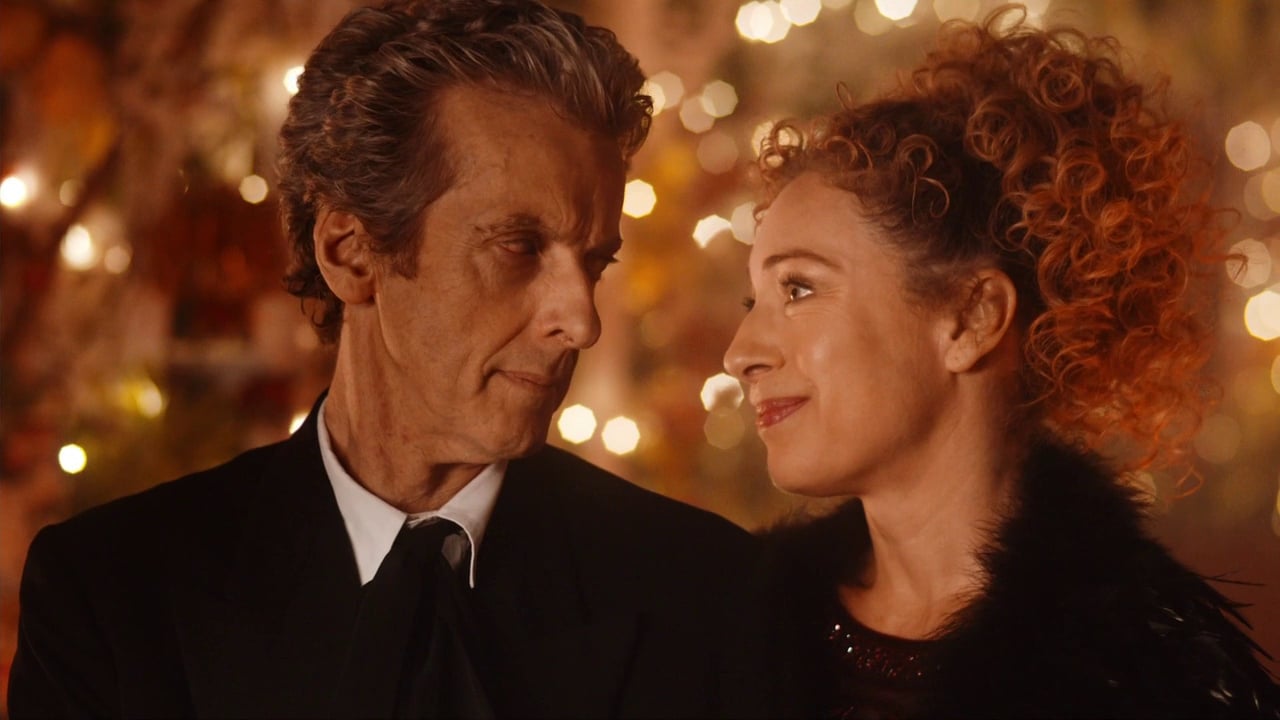 For this year’s Doctor Who Christmas special, showrunner Steven Moffat serves up a frothy combination of romantic comedy and broad farce, which gradually transforms into a poignant tying up of a long-running plot thread introduced as far back as 2008. In contrast to “Last Christmas,” the actual festive content of “The Husbands of River Song” is minimal. The opening sequence is set on Christmas Day in a far-future human colony (which, from its appearance, might as well be present-day Earth) where a simple case of mistaken identity causes the Doctor (Peter Capaldi) to be drawn into a scheme being run by his occasional wife, River Song (Alex Kingston). He’s disconcerted to find that, not only does she not recognize him, but her plan involves killing her husband, King Hydroflax (Greg Davies), with the help of yet another husband, Ramone (Phillip Rhys).

Most of River’s previous appearances in the series have been at crucial turning points of her complicated timeline. Here, the audience gets to see alongside the Doctor what she’s like in her normal adventuring life, away from his influence. Kingston has a lot of fun with the character’s cheerfully amoral nature (“An archaeologist is just a thief with patience”), with River double-crossing Hydroflax without batting an eyelid in order to retrieve a priceless diamond lodged in his skull. Having taken the king’s head, she then tries to sell it to a criminal group on an opulent space cruise ship, only to find they’re working for Hydroflax.

But, as usual, she’s one step ahead, having taken the precaution of conducting her negotiations on the day the ship is due to be crippled by a meteor strike and fall onto the planet below. The fact that all the occupants of the ship, even the staff, are said to be hardened criminals is a rather obvious plot contrivance to keep the viewer from feeling too many moral pangs when they all get wiped out in the crash.

The first half of the episode is almost entirely comedic in nature, and the performances are appropriately unsubtle. As the grotesque Hydroflax, with only his head visible perched atop an enormous robotic body, Davies has little to do besides shout a lot and issue impotent threats of retribution after Hydroflax is reduced to a head being carried around in a bag. Matt Lucas (of Little Britain fame) also provides some amusement as Nardole, River’s rather dim helper whose bungling gets the Doctor involved in the first place.

Meanwhile, after his intense work in several of this year’s episodes, Capaldi has the chance to loosen up, as the Doctor tries to keep up with River and convince her of who he is. He even gets the opportunity to try out the companion’s role, pretending to boggle at the inside of the TARDIS with hilarious exaggeration: “I’ve always wanted to see that done properly.” Director Douglas Mackinnon keeps the action bubbling along, aided by some clever creature design, including the insect-inspired heads for the cruise ship’s staff, and the striking appearance of the followers of Hydroflax who accost River (a simple scar, running diagonally across their faces, is revealed as a seam along which the whole head can be opened.)

Only after the heist plot recedes into the background and the episode begins focusing on the relationship between River and the Doctor does it become something deeper. It’s a standard comedy trope to have her blurting out her true feelings about the Doctor while being unaware that he’s standing at her side, but the revelation that she has no expectation of him loving her as she loves him (“And I’m just fine with that!” she shouts, unconvincingly) is genuinely affecting.

Once she realizes she’s face to face with a new Doctor she’s never encountered before, and they start working together, Kingston’s chemistry with Capaldi is just as good as the rapport she had with Matt Smith, but also very different. In keeping with the less touchy-feely nature of Capaldi’s Doctor, the relationship is less romantic and more like a couple of old friends who now understand each other completely.

With River’s history with the Doctor already being so complex that, as he puts it, most people need a flow chart to follow it, her story could have been left where we last saw her, in 2013’s “The Name of the Doctor.” Instead, the episode reaches an emotional conclusion as the Doctor finally takes her to the Singing Towers of Darillium, which were mentioned in her very first appearance (in the 2008 two-parter “Silence in the Library” and “Forest of the Dead”) as the last time she met the Doctor before journeying to the Library where we saw her meet her end.

Unusually, Moffat provides no real help for viewers who don’t remember plot points from years ago, instead relying on Capaldi and Kingston’s acting to convey the importance of the moment. As the Doctor presents River with the sonic screwdriver we saw her wielding in the Library, there’s a satisfying sense of River’s story finally coming full circle.

There was apparently a possibility at one time that “The Husbands of River Song” would be Moffat’s last hurrah before moving on after five years at the helm, and after the creative renaissance of this season’s episodes he would certainly have been leaving on a high. However, he’s been persuaded to stay and oversee the 10th season of the revived Doctor Who, but partly due to his commitment to Sherlock, this new season won’t be seen until late in 2016 (if not until 2017). As happened with the 2011 Christmas special, “The Doctor, the Widow and the Wardrobe,” the show is going into an extended hiatus with a lesser episode, albeit one that isn’t without its touches of humor and charm.

Classic Who DVD Recommendation: The 1985 story “The Two Doctors,” starring Colin Baker and Nicola Bryant, with guest appearances from Patrick Troughton and Frazer Hines, provides a similar mix of a returning face (or two) from the past thrown together with the current Doctor in a rather gaudy story strewn with sardonic humor.