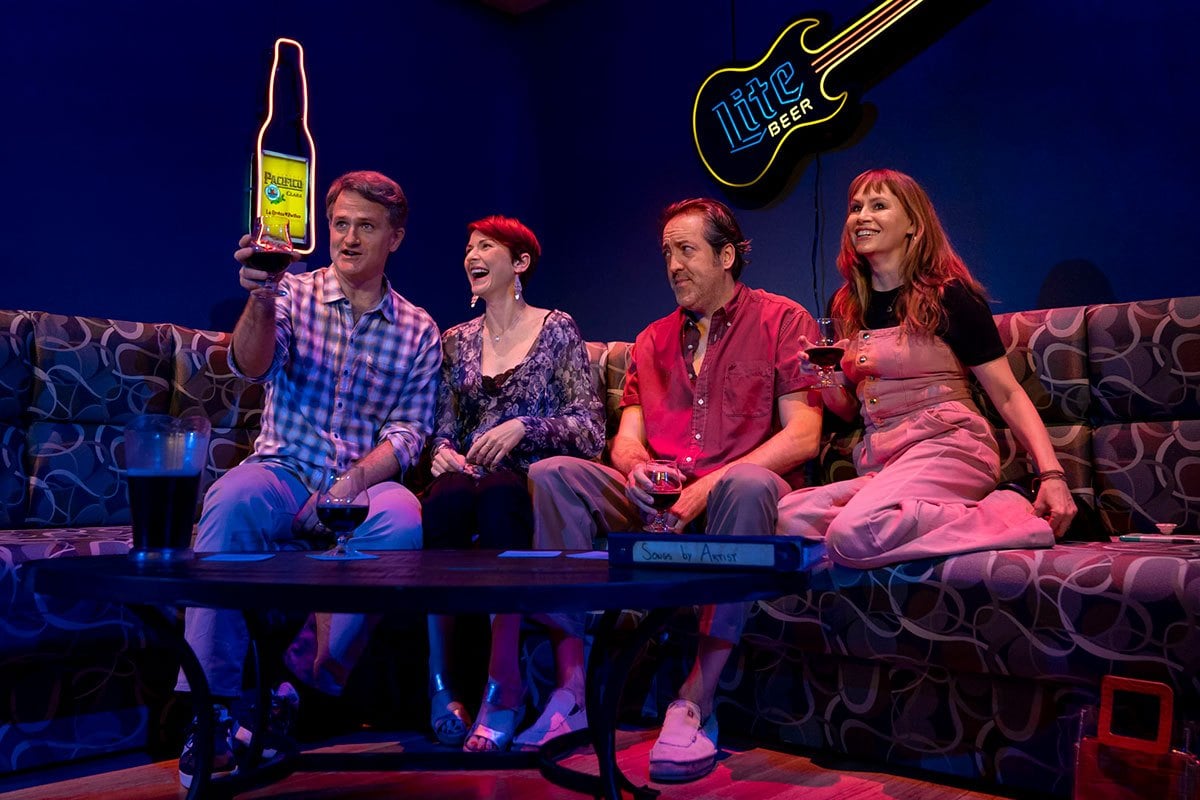 Where’s the line between objectifying women and satirizing the objectification of women? Wherever it is, it’s one that Tracy Letts stumbles over in Linda Vista, his first play on Broadway since Superior Donuts. The graphic sex between crummy, middle-aged deadbeat Wheeler (Ian Barford) and bubbly life coach Jules (Cora Vander Broek) takes the play into the land of Too Far, where it doesn’t have the emotional intelligence to return from. You’re supposed to laugh at Jules’s lingo-laced explanation of why she won’t be able to reach climax with Wheeler tonight, and, then, at Jules’s flip-flop from walking out on Wheeler to deciding to stay the night. But a better play, one that showed real interest in its female characters, could make space to build up Jules, even after dressing her down like this.

Linda Vista only really cares about Wheeler. He’s a former photographer turned camera repairman who’s finally moved out of his almost-ex-wife’s garage, leaving behind his teenage son and his dignity. As he rebuilds his life, he turns out to be mainly interested in pursuing women: cheery Jules, down-on-her-luck neighbor Minnie (Chantal Thuy), and camera-store colleague Anita (Caroline Neff). Each of them had bad experiences with men lately, and Wheeler, though also openly self-hating and miserable, casts himself in the role of savior every time. (Jules describes him, aptly, actually, as a “turtle who doesn’t know he’s lost his shell.”)

Barford lithely animates Wheeler’s monotonous grossness, almost eliciting some real compassion when he gives up his grouchy jokester act and begs weepily for redemption, but Linda Vista also short-changes the star. Since Wheeler just doesn’t know how to listen, the guy is rarely fully present in any scene, even as he inevitably upstages everyone around him. Broek, Thuy, and Neff each join Barford in pushing their performances a little bit beyond the material, sculpting far greater specificity than Letts’s material invites.

Why is anyone laughing when Wheeler describes kids today as “a bunch of allergic, autistic mole-rats”? Often, the play races to punchlines it hasn’t earned, like when Jules, celebrating the couple’s time together, announces that “one month is auspicious” and Wheeler nonsensically butts in with, “I hate auspice.” Only very occasionally does Wheeler’s icky sense of humor land a little, as when he declares, “I think a woman should be able to terminate until the child is old enough to make a cogent argument in its own defense.”

Linda Vista’s self-awareness never quite comes into focus—is it Wheeler who makes really bad jokes or is it Letts?—and that’s precisely why those sex scenes feel so discomfiting or gratuitous. Even if we’re meant to focus on Wheeler’s vulnerability or pathetic lack of empathy, the fact that we’re still seeing these scenes from Wheeler’s slightly lecherous, probably porn-addled point of view feels like a violation of the partners who haven’t been—and won’t be—fully fleshed out after their flesh is out fully. (That sense only strengthens with the later suggestion that one of those encounters wasn’t entirely consensual.)

The play lives most potently in Wheeler’s relationship with Margaret (Sally Murphy), a college ex who’s now long-married to Wheeler’s friend Paul (Jim True-Frost). Margaret’s the only woman in Linda Vista who Wheeler doesn’t ogle or bed, at least on stage, and there’s therefore something far less hazy, lazy, and distracted about this partnership than any other. When Margaret finally chews Wheeler out for his crude callousness and self-pitying treachery, it feels like case closed. Her clarity is far more compelling than his rehabilitation.

Sure, Letts intends to write all of his female characters as empowered women who ultimately take control of their destinies and dress down Wheeler for dehumanizing them: One partner’s triumphal exit line is “I am a person,” and the other’s is “I respect myself.” But that’s as far as his intentions go, as these women are props in Wheeler’s odyssey toward wokeness—and apparent evidence that Letts has completed his. Even in the play’s final moments, the feeling that Wheeler’s tragedies matter most never dissipates.

Todd Rosenthal’s revolving (and revealing) San Diego set keeps the action spinning quickly, but director Dexter Bullard (who also staged the show in an earlier incarnation at the Steppenwolf Theatre) can’t awake the momentum that Linda Vista lacks. After Wheeler subjects Jules and Minnie to the three-hour Barry Lyndon as part of a Stanley Kubrick film marathon, Minnie grumbles, “You know your movie’s too long when you have to take an intermission.” Not always so with theater, but, in this case, I knew what she meant.

Linda Vista is now playing at the Helen Hayes Theater.