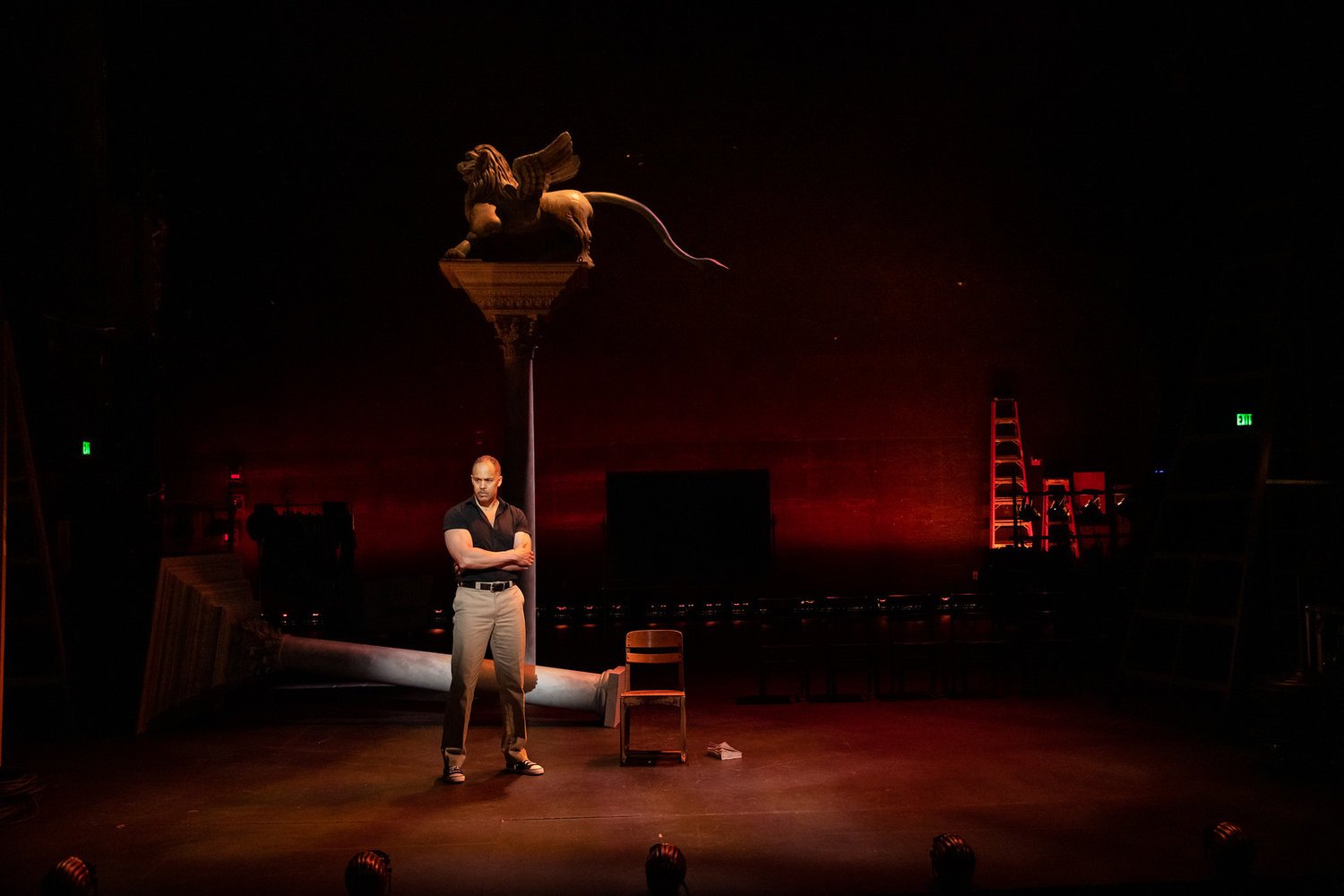 Keith Hamilton Cobb’s American Moor dramatizes an audition for the role of Othello, where a seasoned black actor endures patronizing comments and questions from a white director younger than himself. The play will interest Shakespeare fans, but also anyone interested in the life of an actor, the dynamic between actor and director, the dark side of creative collaboration, and the racial dimension of all these things.

The main incident in American Moor is a debate between the actor, Keith (Cobb), and the director (Josh Tyson) over the delivery of his audition text: Othello’s speech before the senators of Venice. Keith prefers a reserved delivery, while the director wants him to be more obsequious. This disagreement, with all it implies about the director’s discomfort with Keith’s own self-possession and his preconceptions about black performance, provides the occasion for the speeches and asides that make up most of the play: glimpses into Keith’s fraught history as a working black actor who loves Shakespeare and his increasingly furious internal monologue as he weighs the incompatible possibilities of, on one hand, standing up for himself and his reading of the passage and, on the other, getting the part.

These musings, Keith’s dispatches from “the corner of Me Street and Shakespeare,” amount to an indispensable work of creative criticism. In addition to the debate over the scene with the senators, American Moor allows us to see what it means to a black actor, who hasn’t had the opportunities he deserved, to have to bend to a white reading of Othello just to have a shot at getting the only big role in Shakespeare that he’s traditionally seen as fit to take on.

The director barks out Keith’s name like he knows him well and feels free to make comments about his body. He asks if Keith has any questions, as though his academic ideas about the play outweigh Keith’s lived experience of blackness and the sense of Shakespeare’s lines that comes from taking them into his body and memory. He “plays devil’s advocate” to Keith’s ideas in order to dismiss them and accuses him of playing the race card as though unaware that, as Keith puts it in one of the play’s best lines, by taking on Othello in the first place, he “picked up the race deck.” The play’s audition conceit creates a compelling analog to Othello’s audience with the Venetian senate; as Othello must placate white authority as he answers for his secret marriage to Desdemona, Keith makes his own stand in a creative context.

Race is at the heart of American Moor, but it’s also a pleasure to see Cobb dream his way into Shakespeare’s female roles as Keith recalls a past experience with an acting teacher. When first asked what role from the canon he would like to play—an inauthentic question, as it turns out, since the only acceptable answers are black characters—Keith went, not for Hamlet or Macbeth, but for Titania, the fairy queen from A Midsummer Night’s Dream. (The teacher scoffed at this choice and gratuitously corrected his pronunciation of her name.)

While the main analogy in Shakespeare to the situation between Keith and his would-be director is Othello’s speech in front of the senators, Cobb expands the range of association by channeling Cordelia before Lear as well, her refusal, in her integrity, to misrepresent herself in deference to her father’s authority. In this vein, we get to hear Keith recite, not only Romeo’s “teach the torches,” but also Juliet’s “Gallop apace.” If it’s familiar to imagine a black actor who dreams of playing Hamlet pigeon-holed into the role of Othello, it’s more striking to watch Cobb claim all of the Bard as his terrain and indulge his fantasy of playing Shakespeare’s women in love. Movingly, American Moor’s female dimension is also alive in Keith’s admiration for Desdemona, a character sometimes dismissed as one-dimensional, who in this show becomes a heroic figure, brighter than those around her, fiercely devoted and brave.

In addition to a compelling account of black performers’ ambivalence toward Othello, the burden that the play and its title role can be for them, American Moor also offers a promising avenue into the future of Shakespeare performance, a conversation with the text, in a modern idiom, as opposed to a translation of it, that brings us closer to Shakespeare’s language, not further away. With the Oregon Shakespeare Festival’s recent foray into modern-English “translations” of Shakespeare and the release of strange, unsatisfying film adaptations like Claire McCarthy’s Ophelia, not to mention David Michôd’s upcoming quasi-Shakespearean The King, the future of Shakespearean adaptation, how the old material will be reheated and served to 21st-century audiences, for better or worse, is up for grabs. It’s heartening, then, to see a rich, composite performance that incorporates Shakespeare’s language, thinks hard about it, and brings it into conversation with contemporary themes and concerns.

To take just one example, after delivering his version of Titania’s “forgeries of jealousy” speech, Keith teaches the audience that he learned from the OED that in Shakespeare’s day jealousy meant not only what it means to us but suspicion too. Later in the play, he applies the same phrase—the forgeries of jealousy, now with the added association of suspicion—to the microaggressions coming at him from the young director. In this way, the audience is guided deeper into Shakespeare’s words while, at the same time, those words are given new meaning, as they are applied to a situation we recognize, and recognize as morally serious.

American Moore is now playing at the Cherry Lane Theatre.

Review: Freestyle Love Supreme Pumps You Up with Rhyme and Rhythm

Betrayal Review: The Actors Are the Thing, the Stage-Craft Not So Much