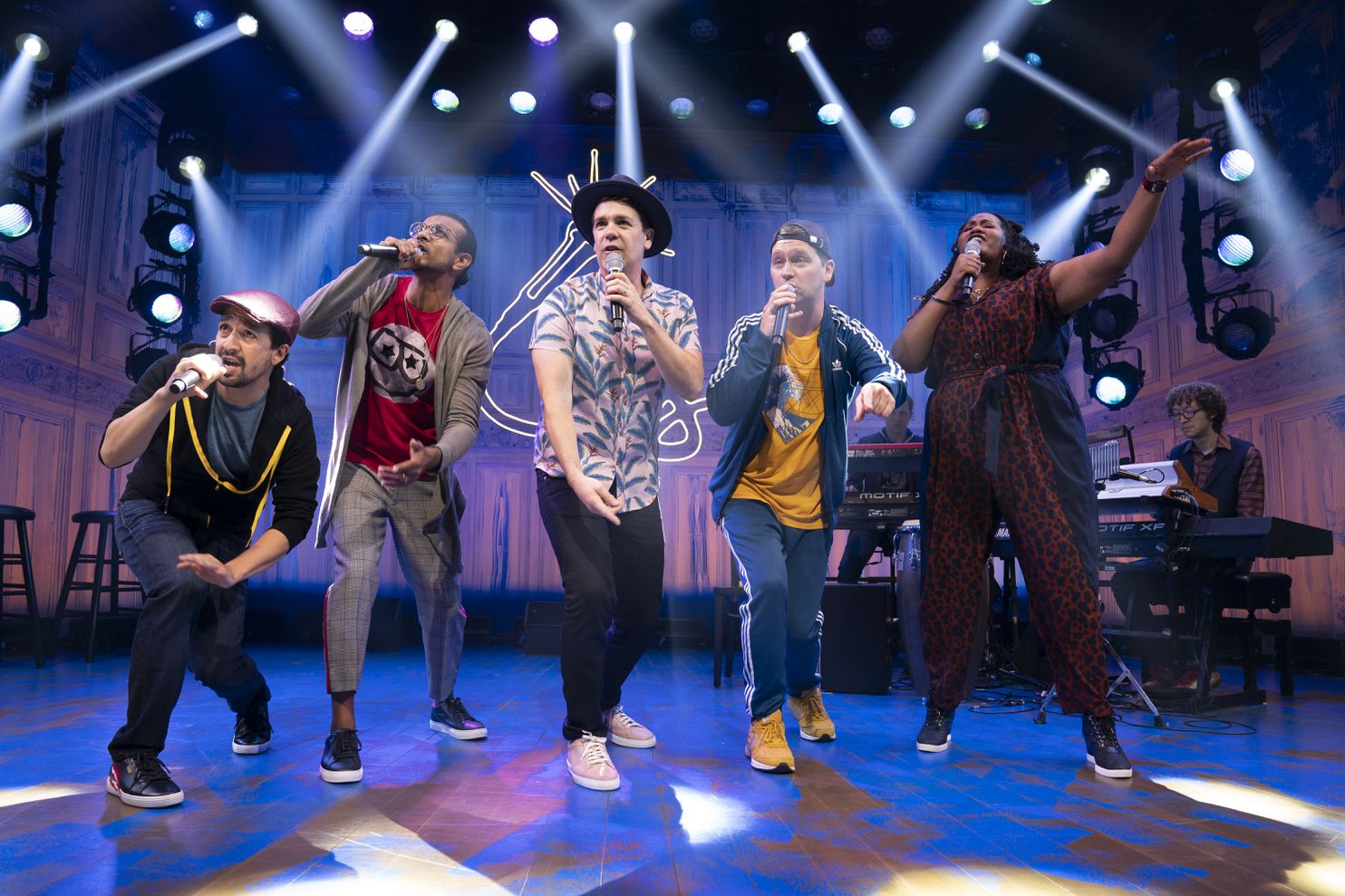 Miranda turned up in the final minutes of Monday’s 10 p.m. performance, but it wasn’t the Miranda we were expecting. The real Miranda had, according to Twitter, already appeared as a guest in the 7 p.m. show, and, as the end of the evening neared, it became increasingly clear that he’d gone home long ago. But you never know what you’re going to get at Freestyle Love Supreme. So, when a volunteer audience member told a story about meeting Miranda outside the Booth Theatre earlier in the day, the tale inspired host Andrew Bancroft, a.k.a. Jelly Donut, to trot out a spot-on impression of the Hamilton creator. As he freestyled a la Miranda, the rest of the show’s cast backed him up with a spontaneous parody of Hamilton’s “My Shot.”

If it’s the promise of one of these big names—and let’s face it, Miranda is the main attraction—that helps sell out a Broadway house at 10 p.m. on a Monday night, it’s the new faces running Freestyle Love Supreme who will leave audience members eager to return. The performance I attended was decidedly celebrity-free (the special guest was actress Ashley Pérez Flanagan, a.k.a. Reina Fire, funniest in imitating Christine Daaé’s high notes in a fleeting Phantom of the Opera send-up). But, with no superstar stealing the spotlight, the four lead performers had ample opportunity to stake their claims to a Broadway debut.

Holding down the beat at this performance was two-time World Beatbox Champion Kaila Mulladay, a.k.a. Kaiser Rözé, a one-woman percussion section and sound-effects catalog. A request for a verb from the audience (the cast went with “vomit”) yielded a gurglingly explosive soundstorm from Mulladay. Aneesa Folds, a.k.a. Young Nees, who got her start as a rapper in Freestyle Love Supreme’s academy program, delivered some sizzling R&B vocals and an amusing rant about the disastrous impact of humidity on her hair. Bancroft’s quick-thinking banter with the audience made him a winning MC, and he showed a nifty knack for inserting references to earlier sketches and discarded audience suggestions into each scene.

But the star-is-born moment—or a whole lot of moments, really—belonged to Utkarsh Ambudkar, a.k.a. UTK the INC, an actor whose dexterous control over rhyme and rhythm is dazzling. After that Mulladay vomit impression, Ambudkar spat out some deliciously site-specific commentary: “Kaiser Rözé, it’s just not fair/I think she just ate somewhere in Times Square.” Ambudkar registers, not unlike Miranda, as simultaneously goofy and brilliant: He’s equally at home caricaturing imagined characters and rocking out in his own skin.

Some audience ideas yield more fabulous fruit than others. Freestyle Love Supreme’s “Second Chance” routine, in which a lucky volunteer gets to see their worst mistake in life acted out and then rewound and repaired, proved particularly meaty fodder: A young woman named Meg recounted how, in her Minnesotan adolescence, she lost control of her vehicle while driving over black ice, careened into a barn, and crushed a very unlucky pig. That’s just the sort of ridiculous premise that Freestyle Love Supreme’s cast members can sink their teeth into. Ambudkar was delightful as designated-driver Meg, while Bancroft gleefully portrayed the shocked farmer, and Mulladay the ill-fated squealer.

A sketch featuring an audience’s member’s tutoring session with a young man with autism and an overlong tribute to the Muppets benefitted less from the utter unpredictability of the format. Luckily, Ambudkar again rescued the latter section, this time by coincidental virtue of his own real-life experience as a performer on The Muppet Show, which he shared movingly. And whether routines go south or catch fire, they’re gone for good in the instant that they’re over. (To make sure of that, the ushers seal all cellphones in magnetic Yondr pouches as the audience enters. Don’t worry: Your phone still never leaves your hands.)

“I can’t believe these dummies let us on Broadway,” Folds rapped at one point early on, but bringing these rap-scallions all the way doesn’t seem like a dumb idea at all. (How many other outstanding acts might make the leap if only for an omnipotent benefactor and collaborator like Miranda?) Freestyle Love Supreme, staged by Kail and lit snappily by Jeff Croiter, does its performers an extraordinary service: The production gets out of the way and lets its stars (from the freestylers to the beatboxers to co-music supervisor Arthur Lewis, leading the small band on keys) do what they do best. They may be young, scrappy, and hungry, but there’s no way, whatever performance you attend, that they’re throwing away their shot.

Freestyle Love Supreme is now playing at the Booth Theatre.

Review: As Anatomy of a Presidency, The Great Society Is No Revelation

Review: American Moor Illuminates the Experience of Acting While Black