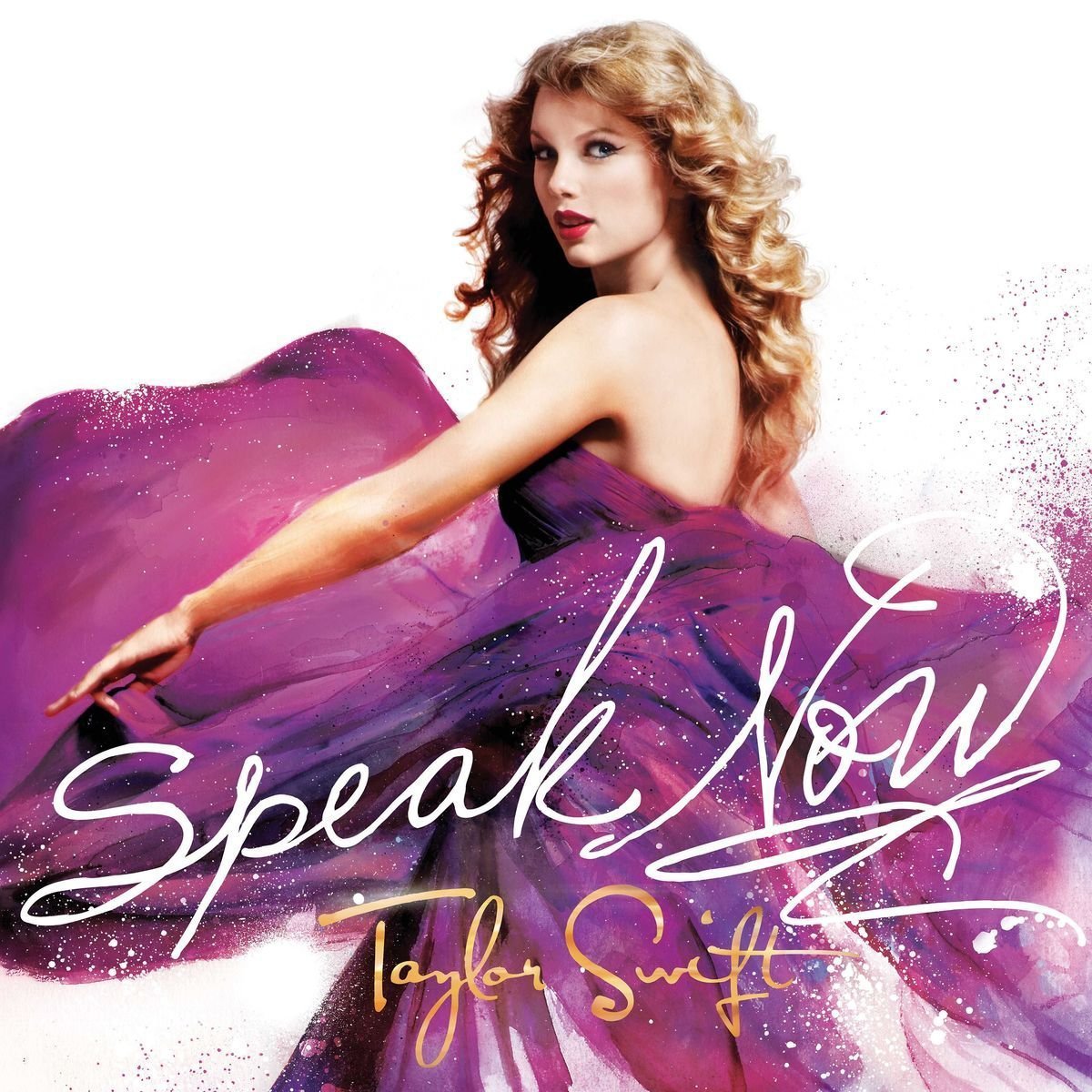 A quick heads-up to Sugarland: This is how an ostensible country act makes a full-on pop album that sounds contemporary and relevant. That comparison may not be fair, given that Taylor Swift in one of the biggest stars in either pop or country at the moment. But Speak Now is an album of expertly crafted pop music that actually justifies at least some of the critical hyperbole and commercial clout that have characterized the last two years of Swift’s career. The album is still problematic in precisely the same ways that its two predecessors were, but Speak Now also finds Swift doing the things that she does well even better than she ever has before.

What that means is that there isn’t a song on the album that isn’t an absolute wonder of technical construction. In terms of her ability to write an indelible melody, Swift rivals power-pop acts like Fountains of Wayne and Guster, and songs like “Back to December” and “Speak Now” showcase Swift’s unique knack for matching the overall tone of a melody to the broader themes of a song. It isn’t easy to make a melancholy song like “Back to December” sound catchy at the same time, but that’s what Swift does, and it’s an impressive trick.

Perhaps even more impressive, though, is her mastery of song structure. It isn’t just about writing a clever lyric or melodic figure to serve as a hook, though Swift certainly does both. Instead, it’s a matter of placing those hooks at exactly the right moment in a song and ensuring that the arrangement and production add just the right amount of punch. Swift and producer Nathan Chapman are simply better at writing hooks and showcasing hooks, respectively, than just about any other team in contemporary pop, and they somehow make that seem effortless over the course of the album.

Consider lead single “Mine,” on which the standout line in the refrain (“You made a rebel of a careless man’s careful daughter”) is the only one in which Swift’s vocals are double-tracked. Or how the instrumentation drops out during the last two words of the hook in “Last Kiss,” allowing Swift’s breathy vocal delivery to bear the entirety of the song’s emotional weight. Or how a simple acoustic guitar figure on “Enchanted” slowly crescendos behind each repetition of the line “I was enchanted to meet you.” These are deliberate songwriting and production choices, not happy accidents or the work of someone who approaches pop music casually. In terms of its construction, Speak Now is a studied, smart album that is easily the best, most dense work of Swift’s career so far.

Unfortunately, the greater complexity and range found in Swift’s sound and in her song constructions doesn’t necessarily translate to her songwriting. One of the many lingering questions about Swift’s potential shelf life as a recording artist has been whether or not her ability to channel the “one of us” teen experiences into pop songs would extend into adulthood. Moreover, Swift’s transformation into a global star has placed a significant limitation on her opportunities for the everyday, relatable experiences that have informed her best songs. Will the same audience that was so enamored of Swift’s tales of awkward teenage angst also go for songs about a series of high-profile celebrity boyfriends?

On Speak Now, Swift seems eager to find out. She remains open about using simple, first-person musings on love and boys as the primary focus of her songs. This time out, that single-minded focus means that, instead of a high school crush and stuck-up cheerleaders, she’s writing about a feud with Kanye West and relationships with Joe Jonas, Cory Monteith, and John Mayer. “Dear John,” about Mayer, has been the most buzzed-about track leading up to the album’s release, and it’s a slight departure for Swift. She’s a lot of things, but subtle isn’t one of them, and it’s impossible to think of the song as directed toward anyone but Mayer, especially since she and Chapman give the track a fuzzy blues-pop arrangement that could’ve been lifted directly from Mayer’s Continuum.

On one hand, it’s easy to sympathize with Swift, as she laments her “blind optimism,” since Mayer’s entire public persona is built on being a rakish dick. But the song also reflects several of Swift’s chief limitations as a songwriter. Her narrators often seem to lack insight because Swift writes with the point of view that hers is the only story to be told, which makes a song like “Dear John” or “Better Than Revenge” come across as shallow and shortsighted. She often comes up with a great, revealing line (“The organ starts to play a song/That sounds like a death march,” from “Speak Now” is just perfect), but there isn’t much in the way of emotional depth or maturity to these songs. If there’s something of the modern “No, I’m right, and you should just shut up” zeitgeist reflected in Swift’s perspective, it’s also easy to wish that a writer of her obvious smarts delved into more substance and developed a more fully informed take on matters of life and love.

To that end, it’s also troubling that Swift’s songs still uniformly build an artistic persona that is defined exclusively by her relationships with men. A song like “Enchanted” or “Speak Now” may work brilliantly on its own merits, but over the course of three albums, Swift hasn’t shown that she can write authoritatively about anything other than how great boys are or how much boys suck or how dreams about boys will take her somewhere better than where she is now. “The Story of Us” and “Better Than Revenge” describe a young woman who is at turns sharp and snide, but who is nonetheless defined by relationships. Even the confessional “Never Grow Up” turns on memories of “what it sounded like when your dad gets home” and “your little brother’s favorite songs.”

That lack of self-awareness comes to a head on “Mean.” While Bob Lefsetz has gone on record to claim that the song is specifically about him, it isn’t like he’s the only person to voice a negative opinion of Swift over the last several years. To that end, the album’s punchline, “Drunk and grumbling on about how I can’t sing,” comes across just as smug as Swift accuses her critics as being. Instead of actually doing something to improve on her inability to find or hold pitch consistently, Swift has simply written a song about how it’s “mean” for people to point out that problem. But it stands to reason that someone who chooses a career as a recording artist might be judged for his or her ability to sing well, and the fact that Swift remains a technically poor singer negatively impacts the overall quality of Speak Now, and that’s neither unfair nor mean to point out.

Though she does vary her phrasing in ways that attempt to mask her limited voice (the way she sneers, “She looks at me like I’m a trend/And she’s so over it,” on “Better Than Revenge” is especially effective), Swift is still noticeably off-pitch at least once on every song on the album. The simple fact that she’s written a song that uses juvenile ad-hominem attacks to dismiss anyone who might say so doesn’t make it any less of a liability. It’s a real problem. So is the fact that the message of “Mean” flies in the face of much of Speak Now and the rest of Swift’s catalogue. Considering the patronizing, condescending sermon she’s written for West on “Innocent,” or the way she goes for the jugular on “Better Than Revenge,” “Speak Now,” and “Dear John,” it’s hypocritical for Swift to call anyone else out for saying something negative, since that’s kind of her M.O.

While it’s possible to say that Swift writes what she knows and that she writes it well, it’s just as possible to say that she has a limited repertoire. Speak Now proves that she didn’t use up an entire lifetime’s worth of references to dancing or kissing in the rain on Fearless. Though she confines the fairy-tale imagery of her earlier work to “Enchanted” and “Long Live,” she replaces it with several lines about fireworks, and each of the album’s first three songs speak of someone who is “guarded.” To her credit, she doesn’t mix any metaphors this time out, but her lyrics generally lack the variety and sophistication of her compositions.

Speak Now is no pop masterpiece, though it’s sure to be hailed as such in some circles. But it’s an album that finds Swift getting an awful lot of difficult stuff right, and it makes it clear what she still needs to develop in order to refine her craft even further. That literally every song on the album sounds like a viable radio single should buy Swift another couple of years to develop an even more mature, less me-first-all-the-time perspective and, hopefully, to work with a vocal coach.

Review: Olivia Rodrigo’s Sour Is a Sharp, If Myopic, Portrait of Adolescent Angst