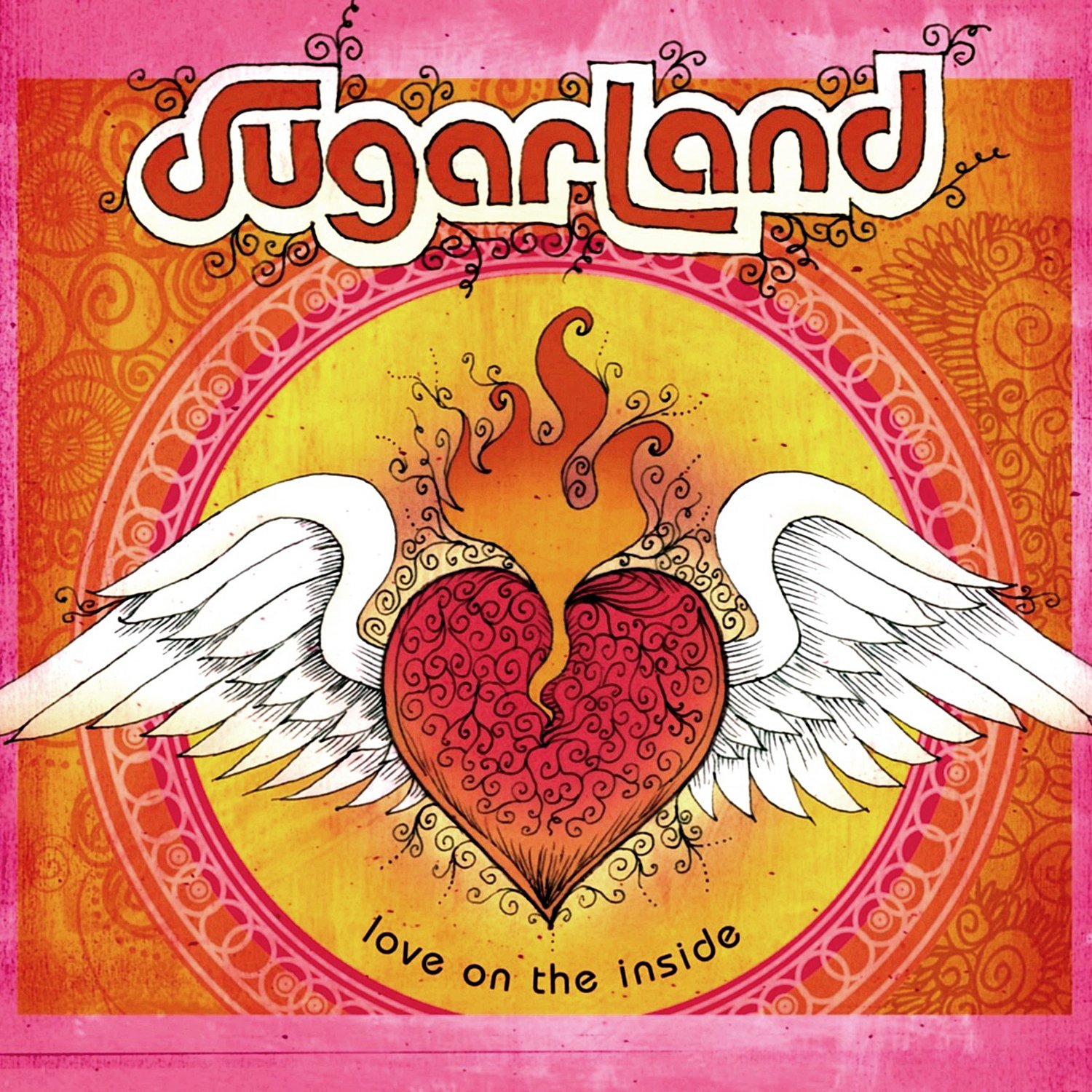 Far from the monstrosity that its lead single, “All I Want to Do,” suggested it would be, but equally far from the masterpiece that many writers in the mainstream country press have made it out to be, Sugarland’s third album, Love on the Inside, finds the enormously popular duo backing themselves into an aesthetic corner and coming up with something that only occasionally works as pop and rarely as country. Perhaps what’s most baffling about what’s been written about the album thus far is that it’s being hailed as progressive. Granted, standards for “progress” in mainstream country are considerably lower and a few years outdated compared to other genres, but the record simply doesn’t support that reading.

Though I’m no traditionalist and will gladly go to bat for the occasional pop-country record that’s done well (say, LeAnn Rimes’s Family, which has sold just about 20K more records in its entire run than this album sold in its first week), I cannot for the life of me figure out what’s supposed to be progressive about songs that include a stylistic tribute to 20-year-old Def Leppard arena anthems (the bombastic “Take Me as I Am”), a song that baits and then pales in comparison to a classic Concrete Blonde single (“Joey,” at once too vague and too literal to be the effective what-if scenario it sets out to be), a couple of tracks that are produced exactly like Bryan Adams’s early-‘90s schlock (the heavy-handed “Love” and deluxe edition bonus track “Operation: Working Vacation”), and ballads that are bald-faced attempts to replicate the critical and commercial successes of their own hit “Stay” (the acoustic, drum-less “Keep You” and “Very Last Country Song”). And then, of course, there’s that first single, which lifts the melody of its chorus from Tony! Toni! Tone!‘s “If I Had No Loot” and is the most grotesque thing shipped to radio since Jessica Simpson’s cover of “These Boots Are Made for Walkin’”—or perhaps Kevin Federline’s “Popozao.” It’s bad enough that someone’s mother should be slapped, so of course “All I Want to Do” is currently #2 with a bullet.

These songs stand as some of the most prominent examples of how mainstream country’s most popular acts are transforming the genre into this decade’s answer to the adult contemporary of the ‘90s—consider Keith Urban’s recent dead-serious Phil Collins cover—as radio formats have shifted and current AC and Adult Top 40 playlists have included increasingly more urban and hip-hop-influenced singles. In and of itself, that doesn’t have to be a bad thing: Included on the deluxe edition of the album is Sugarland’s frankly beautiful live rendition of the Dream Academy’s “Life in a Northern Town” with tourmates Little Big Town and Jake Owen, which was rapidly climbing the charts as an unofficial single before “All I Want to Do” took it out at the knees. But that track, a pretty great pop single in its own right, is the exception on Inside, as many of the songs either draw their inspiration from pop music that was terrible a decade ago or are simply executed poorly or repetitively.

As produced by the duo and Bryan Gallimore, cuts like “We Run,” “Joey” and “Love” highlight an inability to arrange tracks in a way that’s memorable or shows much awareness of either pop or country conventions. Hearing Kristian Bush strum a mandolin like a guitar (the strings of a mandolin are usually plucked, rather than strummed, in bluegrass and country arrangements or, say, on R.E.M.‘s “Losing My Religion,” which is probably a better example of this album’s sound) on a track that would otherwise be an unremarkable pop song like “What I’d Give,” for instance, isn’t doing anything to advance pop, country or pop-country. While it’s a pleasant change of pace that Sugarland generally avoid the loud electric guitars and drum machines of many of their contemporaries, their style is bland.

What gives the duo character and what salvages the album, then, are frontwoman Jennifer Nettles’s performances and a handful of cuts that rise above the middlebrow songwriting and production. Alongside Carrie Underwood and Taylor Swift, Nettles is one of precisely three women who regularly score airplay at country radio; that she’s a superior vocalist to either of those two women, especially in Swift’s case, doesn’t say much. But in terms of her power, range, distinctive phrasing and versatility, Nettles is perhaps the best female singer mainstream country has produced since the generation of women that included Trisha Yearwood, Patty Loveless and Pam Tillis. She has the pipes to sell a would-be anthem like “Take Me as I Am” and the sensitivity and expression to bring a real emotional depth to otherwise flat songs like “Keep You” and “What I’d Give.” Where Nettles gets herself into trouble—and what this album irrefutably confirms is happening—is that she insists on affecting a ridiculous, unbelievable Southern drawl that brings the sincerity of her performances into question. When she fakes an accent to try to make “All I Want to Do” or the flat-out stupid “It Happens” (it hardly ruins a real joke to say that the hook finds her whispering “Shh!” before the song’s title) pass as country songs, she’s insufferable. When she drops the bullshit and just sings, she’s phenomenal.

The stretch of songs that includes “Genevieve,” “Already Gone” and “Keep You” represents not just the high point of the album but the peak of Sugarland’s career to date. While their sophomore album, Enjoy the Ride, found Nettles and Bush struggling to find their voices as songwriters after the departure of founding member Kristen Hall, here they’ve written several songs that make use of interesting images and turns of phrase that also happen to be well-matched to their acoustic-based production style. “Genevieve,” the most traditionally arranged song on the album, finds Nettles singing about a lost love (which, since she’s singing about a woman, also stands as one of the few genuinely subversive moments here), making references to the book Einstein’s Dreams and unapologetically declaring her “my favorite sinner.” “Already Gone,” an excellent choice for the second proper single, boasts soaring melodies in both its A and B sections and hinges on some fine details and observations, as when Nettles sings, “They say the first time won’t ever last/But that didn’t stop me the first time he laughed.” It’s almost great enough to mask the lingering stench of its predecessor. Although “Keep You” is stylistically similar to “Stay,” its arrangement is more purposefully structured; the song is a slow burn that allows Nettles to sink her teeth into lines like “Struggled through a stranger/He loved me ‘til I loved you even more,” before she launches into her impressive upper register during the chorus. “Very Last Country Song” is a fine ballad as well: That both its form and content are recognizable as country music makes it something of an odd fit with an album that, even in its best moments, owes more to pop than country, but it makes for a stark closer.

Or it would make for a stark closer, if not for those deluxe version bonus tracks. Of the five, only “Life in a Northern Town” leaves much of a lasting impression, and their inclusion speaks to the overall problem with the album’s sequencing, which groups its midtempo cuts together and then switches its tone and tempo seemingly at random, preventing the record from building any kind of momentum. That’s somehow fitting for an album that is, above all else, uneven. Inside’s best moments go a long way toward justifying Sugarland’s high profile and suggest that they’re maturing into interesting artists, but just as much of the album speaks to misguided instincts and bad taste. Which is to say that, no matter what Mercury chooses as the album’s future singles, it’s going to continue to sell huge.